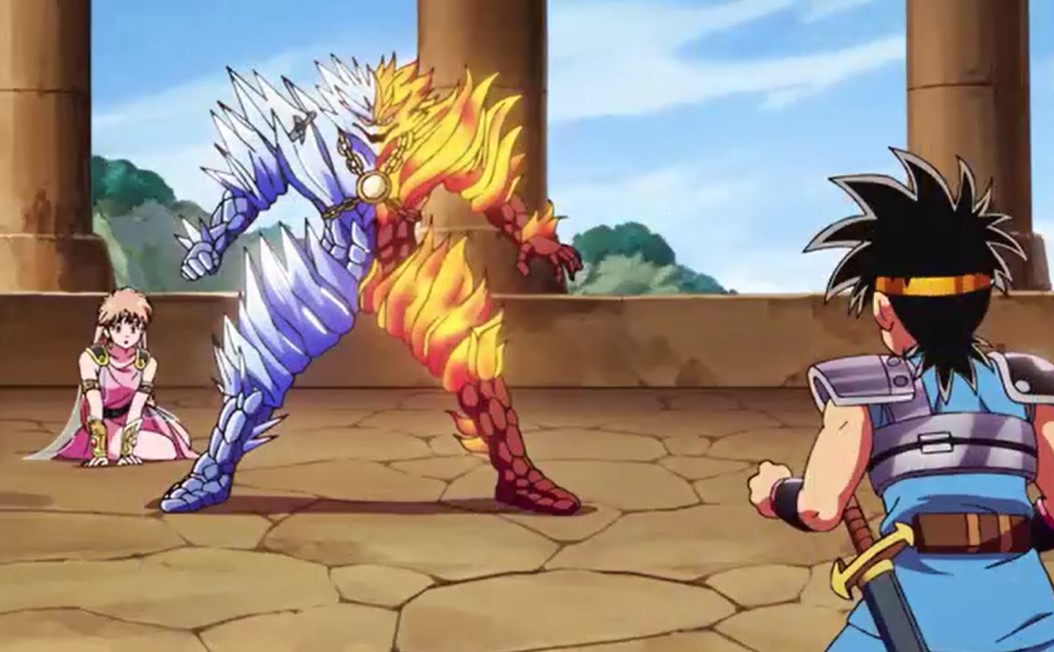 Dai has reached the tower castle to save princess Leona, and at the airship balloon, Baduck is told to remain. Blizzblaze notices that Dai is too fast and Dai said that he would avenge Hyunckle. Blizzblaze replies that it will happen in his dreams and attacks with a super move called Kacrackle. Leona is worried that the super move might freeze Dai to death. Everything inside the castle started to freeze, along with Dai, who unleashes his flaming blade.

He unfroze everything in an instant, and Blizzblaze is asking himself what kind of sword is that. Dai reveals that it is a magic sword and attack with a Fire Earth Slash. The attack cuts the other side of Blizzblaze that is ice, and his hand melts. Blizzblaze realizes that he was right; no wonder Dai has defeated Crocodine and Hyunckel. The little brat’s combat skills have leveled up unbelievably in his battles with the other Legion Commanders.

Dragon Quest: The Adventure of Dai Episode 16 will be released on Saturday, 23 January 2021, at 9:30 AM JST. The latest episode of Dragon Quest will be released every Saturday. Watch this Anime officially on Crunchyroll. Take a look at the details and preview below. 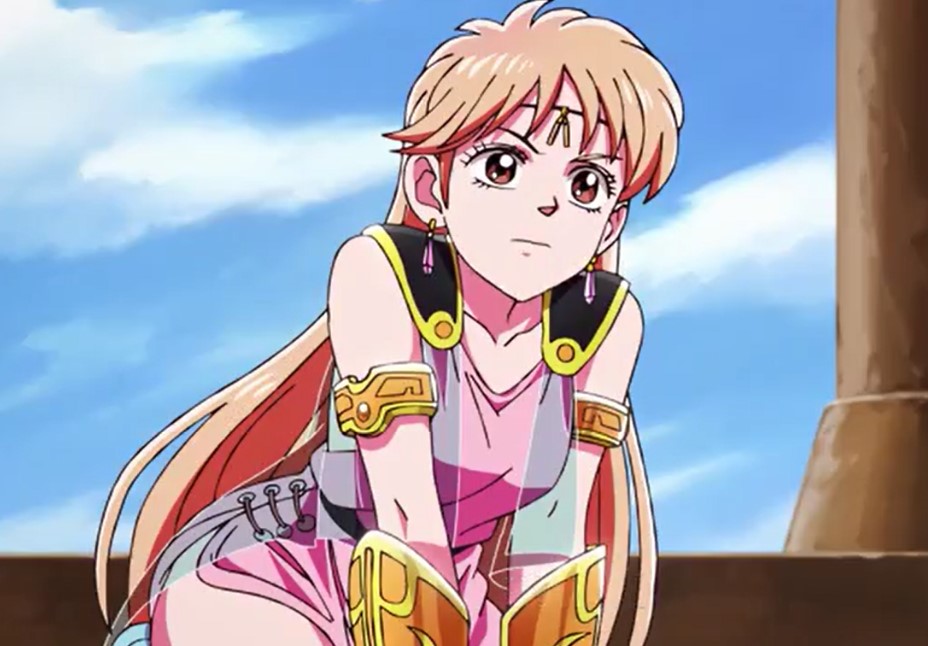 Previously on Dragon Quest: The Adventure of Dai Episode 15

Blizzblaze notice that he is finished and think that it is his time for his trump card. Princess Leona is impressed that Dai has learned to use magic properly. The last time she met with him, it was hard for him to control his power and magic. Popp, Maam, and Amy arrive, and Dai orders them to help the likes of Appolo and others who have been wiped out. Poop looks at Blizblaze, wondering if it is this bastard who did this.

He comments to Dai that it looks like they got the upper hand. Dai warns Popp not to let his guard down since Blizzblaze is laughing at them. Blizzblaze powered up and regenerated his broken arm back and say Dai’s head belongs to him. He unleashed dark magic and attacks with Shrapne Detonation that send everyone flying. Dai got up and said it would take more than that to defeat him, and Blizblaze said they have already lost.

He reveals that the move he made was both an attack and a signal to his servants to begin an infernal battle. A lava and ice volcano started erupting. Suddenly an army of the dark flame spire and dark ice spire is complete. Both armies fused and encircled the tower castle with Blizblaze cursed field. Blizblaze reveals that it is the ultimate tactic that made his Blizzblaze Legion unbeatable. All they can do now is to scramble around, waiting to be slaughtered.

Popp yells that he can’t slaughter them by just a little shaking. Blizzblaze asks Popp to dare try him. Popp tries to cast Sizz, but it didn’t work, and Dai tries Frizz that also didn’t work. Maam realizes that Blizzlaze has nullified their magic, and Blizblaze comments that they have not gotten the rules yet. Dai tries all the slashes, but they are not working, and Blizzblaze smiles at him. Dai realizes that the more he attacks Blizzblaze, the more his strength is getting sucked. 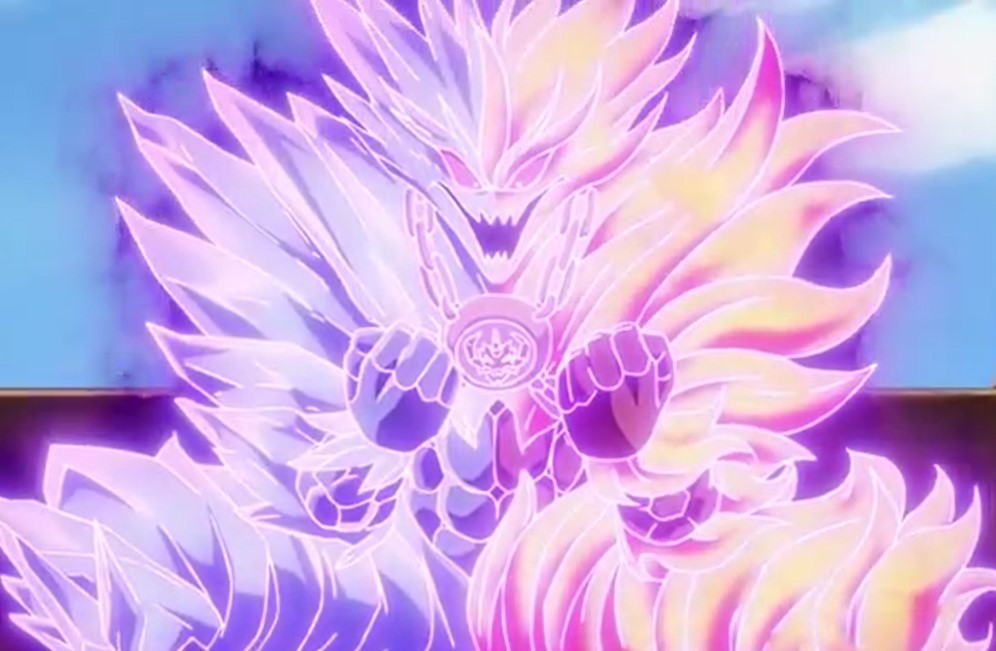 Blizzblaze started to show his true strength coming from his trump card. His other half knows as Flazzard suddenly gets stronger and overpower Dai. Blizzblaze said that he is not getting stronger; they are just getting weaker due to the Dark Flame Spire. Blizblaze reveals that everyone inside the field is weakened, and they can not use spells. Blizzblaze also said Dai is weaker than a normal human, and Dai tells Flazzard that it is cheating.

He must fight fair and square, and Blizblaze said he doesn’t like to fight; he likes winning. Blizzblaze yells that it is time for slaughtering them. All they can do is defend. Amy is worried that she can not cast heal to heal princess Leona. Maam realizes that they can not win inside Blizblaze territory and said they have to escape. Dai replies that he can’t lose to that cheater, and Maam said he wouldn’t lose as long as he is alive.

But they have to escape and save the survivors, or they will be all wiped out. Dai refuses to leave the battle like a coward, and Blizzblaze gets hold of Leona. He freezes Leona and turns her into solid ice, and tells them not to worry; she is still alive inside there. He reveals that he used legendary, forbidden magic to freeze her. Not even a single blow can shatter it, and no spell can melt it, but they have to kill him to break the spell.

Dai offers himself to be beaten so that others will escape, and he will remain to save the princess. Dai picks up the sword that he was given as a gift by Leona. The sword is working since it is doing some damages to Blizzblaze, but he keeps on regenerating. Maam knocks Dai since she has noticed that he will get himself killed, and she throws a smokescreen. Blizzblaze fire a Krizz spell that made the smokescreen explode, and he realizes that he made a mistake.

That helped her to escape with Dai and others, but their airship got destroyed with Blizzblaze army. They landed inside the whirlpool that swallowed them. They manage to survive and reach a hidden cave and find an unknown man there. The man said that if they don’t like it, they can leave, and Maam realizes something. She finds that it is her relative uncle Moritov and he gives them a place to hide.

Suppose you have missed the last episode update; use this link, Dragon Quest: The Adventure of Dai Episode 15, to get them. That was all about today’s post.