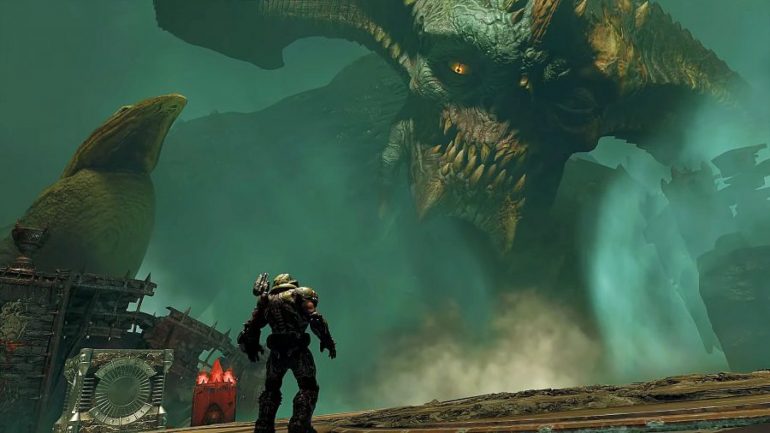 Doom Eternal is one of the best games released in 2020 and it was developed by id software which are well-renowned developers who made Doom 2016. That game was received greatly received by the audience and critics and many fans thought the game will be like Doom 3 that wasn’t that good of a Doom game. With the success of Doom 2016, the developers knew what to the fans loved about the game and they added even more amazing things to it.

Doom Eternal launched with a very positive response and it had one of the highest player counts on steam upon its release. The devs introduced a new mode which was a 2v1 deathmatch that pits two demon controlled players against the Slayer which is also control by another player. It was a very interesting concept which was a fun watch. After some time the developers revealed that there are some DLC played for the game which will be coming in 2020.

During Gamescom 2020 the official trailer for the DLC was revealed which showcased new locations, new enemies, and more lore from the Doom universe. But that isn’t the not thing revealed about the game because, during an interview with PCGamesN, game director Hugo Martin and executive producer Marty Stratton break down what’s coming in the DLC. The story of the DLC is set right after the events of the main games ending and players will be exploring this UAC research facility out in the middle of the sea. There are going to be environment puzzles and in terms of gameplay changes, there aren’t any in this DLC.

But players will have to use their brains to survive the onslaught. Furthermore, this DLC won’t be as long as the main game but in terms of scope, scale, and level of engagement, it will be big as the main game and sometimes even bigger. The players that have completed the campaign will have everything that the Slayer’s got and it includes rune and mods as well. The DLC will available to all of the players that have the main game as well as to those that don’t know them. Those that will buy the DLC will start with all the basic weapons and if it is hard for some they can tone down the difficult.

In the interview they also talked about new enemies is called AI which is like Spirit and they say it “changes the whole dynamic of play.” These enemies will be recurring characters and it will make the DLC more challenging. Moreover, there is also Blood Angel which is a demonic Angel. It possesses armor and is very hard to kill but like the Marauder, there is a chance for the players to land a headshot on them. Body shots can work as well but it will take a lot of ammo in order to kill them.

But this isn’t that scary as there are going to be many Marauders in this DLC and at some point in the campaign players will have to face two of them at the same time which was shown in the trailer. All of this sounds pretty insane and terrifying but Doom fans are ready to take on anything. This DLC is part of Doom Eternal’s season one pass which costs $29.99. Doom Eternal The Ancient Gods will be released on 20 October 2020.