Love of Kill Episode 2: The Assassin Encounters The Bounty Hunter 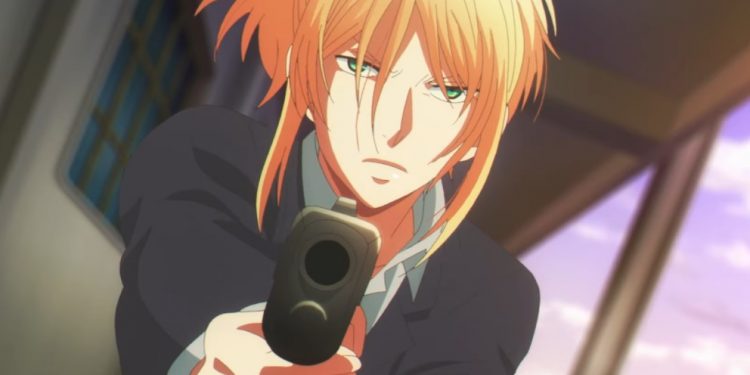 Love of Kill Episode 2 reveals an assassin and bounty hunter arriving at the parking lot and eliminating their first target. They know that their mission is important, and they must complete it. They shot the target until death, and the guy in the suit realizes that they are out of bullets. The lady points the gun at that guy, who realizes that he is the only one out of bullets. He told the lady to call it a truce and toss his gun towards her. Love of Kill reveals two strangers meeting for the first time.

But he knew that she would never dare shoot him as he walked towards her. The lady decided to stop him, but he managed to pin her to the ground. She was impressed by how he stopped her from using a double pistol. He put her to the ground as if he wants to kiss her and realizes that he has never seen her around. He asks the lady if she was a bounty hunter since he knew how the assassins around the town looked.

The guy believes that the lady must be a new bounty hunter and tells her not to get involved with dangerous work since her beauty doesn’t suit that. He told the lady not to do that again since her parents might be worried about her. The lady was surprised when the assassin took a picture of her and asked her to tell him her name. He apologizes that he didn’t appropriately approach her since he tried to flirt with her. He also told her it was rare for him to get a chance to talk with the girls. But the lady acted like she was not interested and decided not to tell.

Previously on Love of Kill Episode 1

The guy insists that she give him her name, but they end up getting separated. In the morning, Chateau receives a message from her boss, who tells her that he warns her not to act independently. The boss knew things would get messed up since Chateau went on a mission alone and met with the assassin last night. Chateau is that girl who met with the guy in a suit who wanted to know her. The boss told Chateau to meet with him, and Chateau told the boss that her phone’s battery was about to die.

Ratzland Support Company Representative Euripides Ritzland can’t believe that she hung on him at the office. Jim told Ritzland that he had spoiled Chateau and Ritzland wondered what he should have done; Jim told him to know how to handle women. Ritz realizes that Jim knows to burn someone. He reminds Jim that Chateau Dankworth is the daughter of his father’s benefactor. Chateau is Ritzland Support Company Staff. Jim wonders how Chateau has become a bounty hunter. Ritz realizes that he never asks Chateau about that.

Jim noticed that Chateau had done a great job this month. He is impressed that Chateau has secured two targets singlehandedly. Jim thinks that they might be a guy helping Chateau behind the scenes. The news reporters reveal the mafia that places huge bounties on parties they want to punish. Companies are also making a profit from that, and the government allows that to happen. Chateau has found the next target, and she is trying to locate that guy. She even went to the park, but she saw two punks trading punches. Chateau begins to receive messages from that guy and realizes that the guy took her number last night.

Love of Kill Episode 2 will be released on 19 January 2022. The guy asks Chateau for a date, and Chateau realizes that the guys who dare ask her are dead. She decided to head home, and that guy met with her. Chateau pulls her trigger and points it at him. The guy keeps on following her and assists her on every mission. Chateau wonders why he has to do that, and he even calls her with a private number. Let’s meet when Love of Kill Episode 2 official details.

You can watch Love of Kill Episode 2 online on Crunchyroll & Netflix at 12:30 PM JST. You can also watch Love of Kill Episode 2 online on VRV via Crunchyroll & Youtube’s official channel. She also watches his videos, and Ritz tells Chateau about a new mission. Ritz took a picture of that guy and told Chateau that she had to eliminate Ryang-Ha Song’s assassin. Chateau realizes that it is the same guy and wonders how to eliminate him.

She went after him multiple times, but she failed to kill him, and they both fell in love. The bounty hunter and the assassin begins to go out together. But Chateau acted like she was not interested and sent him away. Seventeen years ago, Ryang saved Chateau and got hurt. Let’s meet when Love of Kill Episode 2 is released.

In the Land of Leadale Episode 3: Will Cayna Revive A Merchant Kill By Ogres?