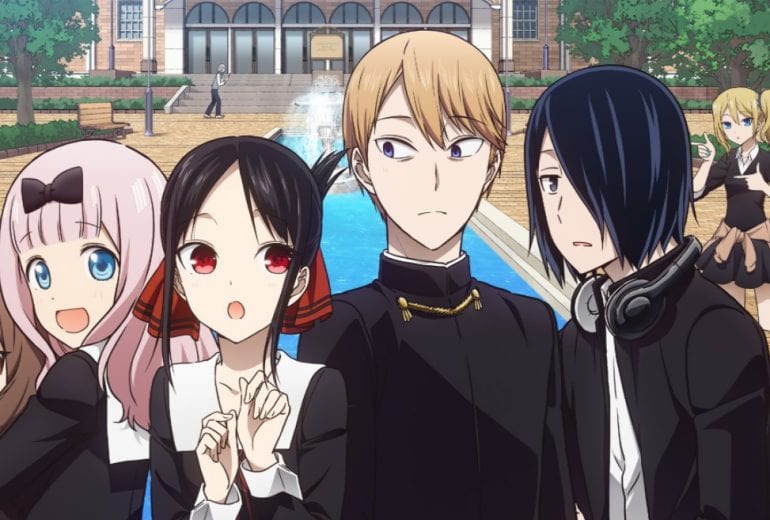 It is the new year of school Kaguya is worried if she is going to be in the same class as Miyuki, they are both beginning the 2nd year of High School. The spring break over Ishigami and the other freshmen advance to their 2nd year and Miyuki and others begin their final year of high school and she can’t decide if she has to go look for her self witch class she is in.

Year 2 Class A is as follows Ino, Miko, Ishigami, Yu, Usami, and Miu the list continues. Her friend came and advised her that she can go see her self rather than standing around. Kaguya asks what if they are in different classes but she decides that she will go and see. Later she finds out that they are in the same class but she is worried about others. Kaguya, Ai Hayasaka, Miyuki are both in the same class Kaguya decided to rush in class.

Kaguya Sama Love is War Chapter 212 will be released on Thursday, 17 December 2020. Note this manga sometimes take a break from releasing its chapters. Love is War releases a new chapter on Thursdays. Let’s move to the latest recap and way to read this Manga below. Let’s take a look below.

She is welcomed by Kashiwagi who told her that they are in the same class. She also finds out that Nagisa, Kashiwa, Tsubas, Tanuma, Maki, Erika, and nd others are both in Class 3 A. The students talk about how they are going to work hard throughout the year and about their careers. Kaguya notices that the only seat no 11 is left and she really wants to seat next to Miyuki.

She went near the seat and fold her hands praying that her wish must come true. When she opens her Shindou show up before she looks on to the name of the seats. She is disappointed that he is in their class and he is popular just like Miyuki. Shindou was a former leader of class D and she is worried that they might be no space left for Miyuki.

It means that she might be sitting next to Shindou. Shindou keeps on charming all the girls inside the class and Miyuki with Chika shows up. They reveal that they are all in the same class and Miyuki will be on seat no. 11. Kaguya is glad that they will be seating together. Meanwhile, ate Class 2-A Yu Ishigami introduces himself to the other students and they clap for him. Class 3 A has new transfer students that give Miyuki a surprise.