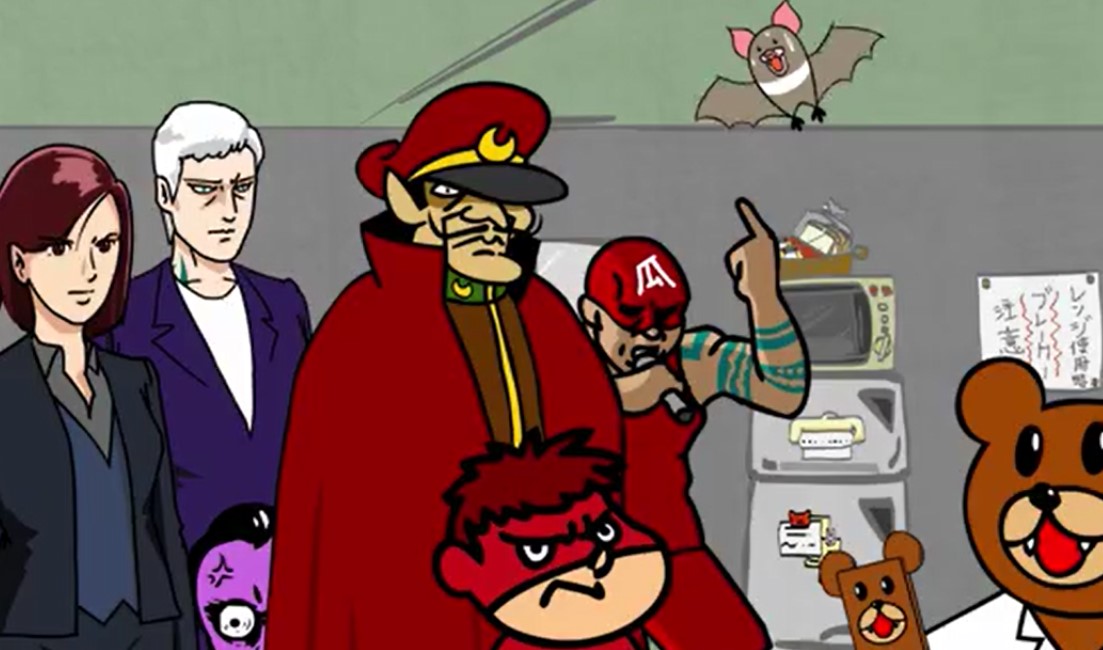 Today we will be concluding the final episode of Golden Spell. Sugar shows up in front of Crotter, who asks him how did he neutralize the Go-Home-Spell. Sugar reveals that he changed his home address to Crotter Inc. In other words, Crotter’s build is now Sugar’s home, and he said he kept one spell up his sleeve just in case. That is the Zombie Spell, and they will keep on gathering in the building in numbers. Sugar reveals that he is sick of trying to earn his approval.

The Zombies manages to capture Crotter and Sugar said he wouldn’t turn him into a Zombie. He shows him a freeze spell that forces the body to go stiff as ice but still talk. Zaharu and Yoshida fail to retrieve the Golden Spell, and Sugar turns everyone into a zombie except for Eagle Talon’s crew and Otaru Crew. They escape and try to find a way to stop Sugar and his zombies. Sugar makes fake news to the world and becomes a new prime minister. He is now controlling the world using his Zombie Spell. He created a book called Living-With-Zombies-Era and reveals that social distancing will be a thumb between two people.

Himitsu Kessha Taka no Tsume: Golden Spell Episode 12 will be released on Monday, 21 December 2020, at 1:00 AM JST. The new episode of this Anime will be released every Monday. You can officially watch this Anime on Crunchyroll. Take a look at the recap and preview below.

The world is still under the control of Sugar. Humans have become zombies, and they are acting according to Sugar’s will. They are infecting each other with zombi’s spell that was created by Sugar. Otaru and her team are with Zaharu, and they can’t get through to the NTS or the Cabinet Office. Sugar has completely paralyzed the government, and Leo reveals that he has finished creating the Golden Spell program.

Otaru tells him to hurry up and create Anti-Spells for the Zombie and Rage spell. Leo said that it is not simple, and Yoshida asks why. He replies that he wants to make something that will nullify all the spells and protect them from any future spells. The Ultimate Anti-Spell needs a positive vibes rating of one million. Yoshida thinks it is too much, and Bat asks if 2 to 300 is not enough. Satou thinks that it is impossible, and Otaru suggests that they can split and work in teams.

Leo reveals that it won’t work since the zombie spell has already crossed the border. It’s only a matter of time before the whole world is zombified like Japan. Yoshida said that they are Eagle Talons; they always find dome way to find a solution to anything. They will find a way to work everything out, and Leo tells him to stop being stupid and face reality. Bat reveals that even the strongest armies in the world are helpless.

Bat suggests that the way to solve the problem is to just apologize to Sugar and beg for forgiveness. All of them look at Bat, wondering what to do next. Zaharu thinks that it is the end of every one. The landlady who owns the Satou’s apartment show up and said she was outside. She asks them if they really want to conquer the world and stand firm like her. She gives them a heart-touching speech and concludes by saying that if the world conquest was a joke to them, they must get a real job.

She adds when the world is in chaos, Heroes like them are the ones who stand up because they are not doing it for money or fame.  She said that if they are not standing up, she can make something stand. She wanted to get naked in front of them, and they decided to save the world. The drawdown the plan to carry out the mission for creating more vibes as they can. Leo creates a gun that will help them seal zombies’ mouths to prevent the spread of infections.

The crew started with their missions saving many humans from the zombies as soon as they can. Sugar notice that his plans are falling apart, and he created a zombie robot to help continue spreading the infection. Yoshida and Satou lure the zombies to their trap and seals their mouths. At the same time, Satou and Yoshida are talking about who is the most important one. The Shining Black robots show up in numbers.

For the upcoming episode of this Anime, that’s what the update and preview have revealed for us so far. That was all about the latest update of the episode finale. You can get more update on this anime on Crunchyroll

List of 10 Villains Who Figured Out Batman’s Secret Identity

Upcoming Netflix Titles That You Need To look Forward to in 2021!