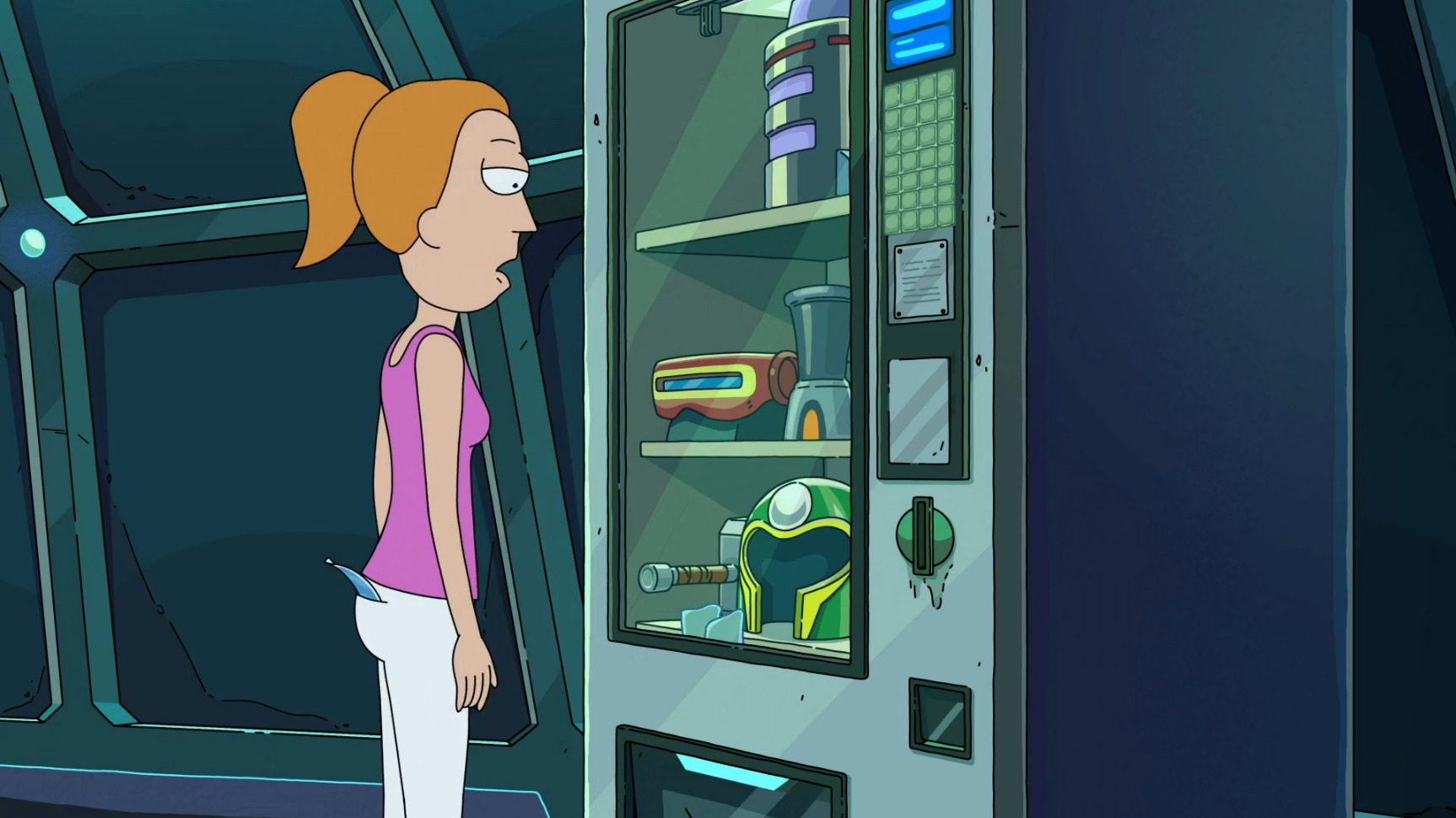 The backstory of Rick and Morty has been a secret in previous Rick And Morty seasons.  This season of “Solaricks” kicked off with an action-packed episode that covered a wide range of topics, from Rick’s childhood home to whether or not Jerry truly was switched out for another version while at Jerryboree. Even the most devoted fan found it difficult to unpack all of it. Are you wondering what Easter egg you might have missed in the season premiere? We got your back. Think of this as your guide to everything, including deep cuts, old episodes, and casual references to monster movies from the 1980s.

With the return of “Rick and Morty,” the first episode of Season 6 featured a lot of wonderful Easter Eggs and minute details. We’ll be exploring some of the more subtly placed and less subtly placed callbacks and references in “Rick and Morty” season 6 episode 1 for this list. There will be spoilers if you haven’t yet had a chance to watch this episode, so you might want to portal out now. Our list includes The Jerryboree Mix-Up, Season 2 Toxicity, Cronenberg World, and more!

Here are all the Rick And Morty Season 6 Episode 1 Easter Eggs:

Season 6 begins immediately after Evil Morty has left the Central Finite Curve. Our Rick and Morty are now stranded on the flying saucer they used to leave the now-destroyed Citadel of Ricks. A brief summary of what happened in season 5 is provided through Rick’s description of their difficult situation.

This opening scene might look familiar because it was almost entirely taken from “Avengers: Endgame.” He even scolds Morty for failing to record his words, saying he lacks a helmet like that “Avengers man.” In all honesty, we’re not sure which is worse: Rick’s confession of a lack of originality or his denial that he is familiar with Iron Man. 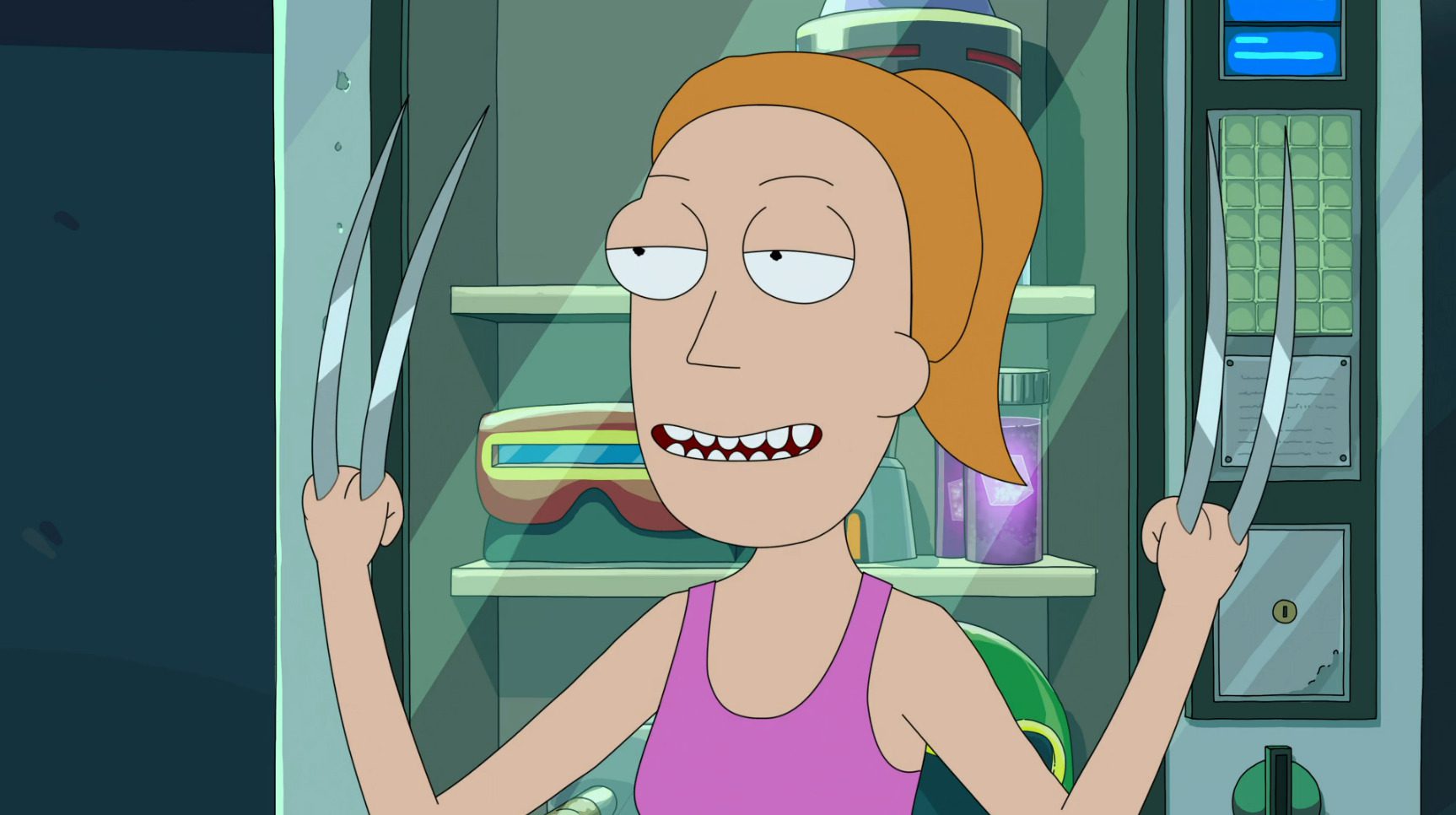 Next, we also get an X-Men Easter egg. Summer is more intelligent than her brother, so she only agrees to assist Rick if he gives her pay in sci-fi gear. This time, she goes for a pair of cute Wolverine claws, but what’s noteworthy about this device is that it’s been mentioned before. During a disappointing dragon experience in  “Claw and Hoarder: Special Ricktim’s Morty,” Rick says, that Morty should have taken him up on those Wolverine claws instead. You were aware of that, right?

The same vending machine that supplies Summer’s Wolverine claws also had a Cosmic Cube, Cyclops’ visor, a Magneto helmet, and a green copy of Thor’s hammer Mjölnir. This means that if Summer successfully completes enough missions, she might be given the power to control thunder, fire lasers out of her eyes, use telekinesis, and contain things so that she can later use their power. Less is known about what the Cosmic Cube will do in the Rick and Morty universe.

Keeping track of the different characters in “Rick and Morty” can be challenging because the show features interdimensional travel. Back in season 2, we found that a different Rick had built a daycare for Jerrys because they didn’t appear to like their trips with Rick and Morty. Similar to how a coat check works, the duo receives a ticket when they leave Jerry at the Jerryboree so they can pick him up later. When they go back to get him, nobody remembers which Jerry is theirs because Morty lost the claiming ticket. Unconcerned, Rick carelessly exchanges Jerrys with another Rick. They actually picked up the wrong Jerry, it seems. 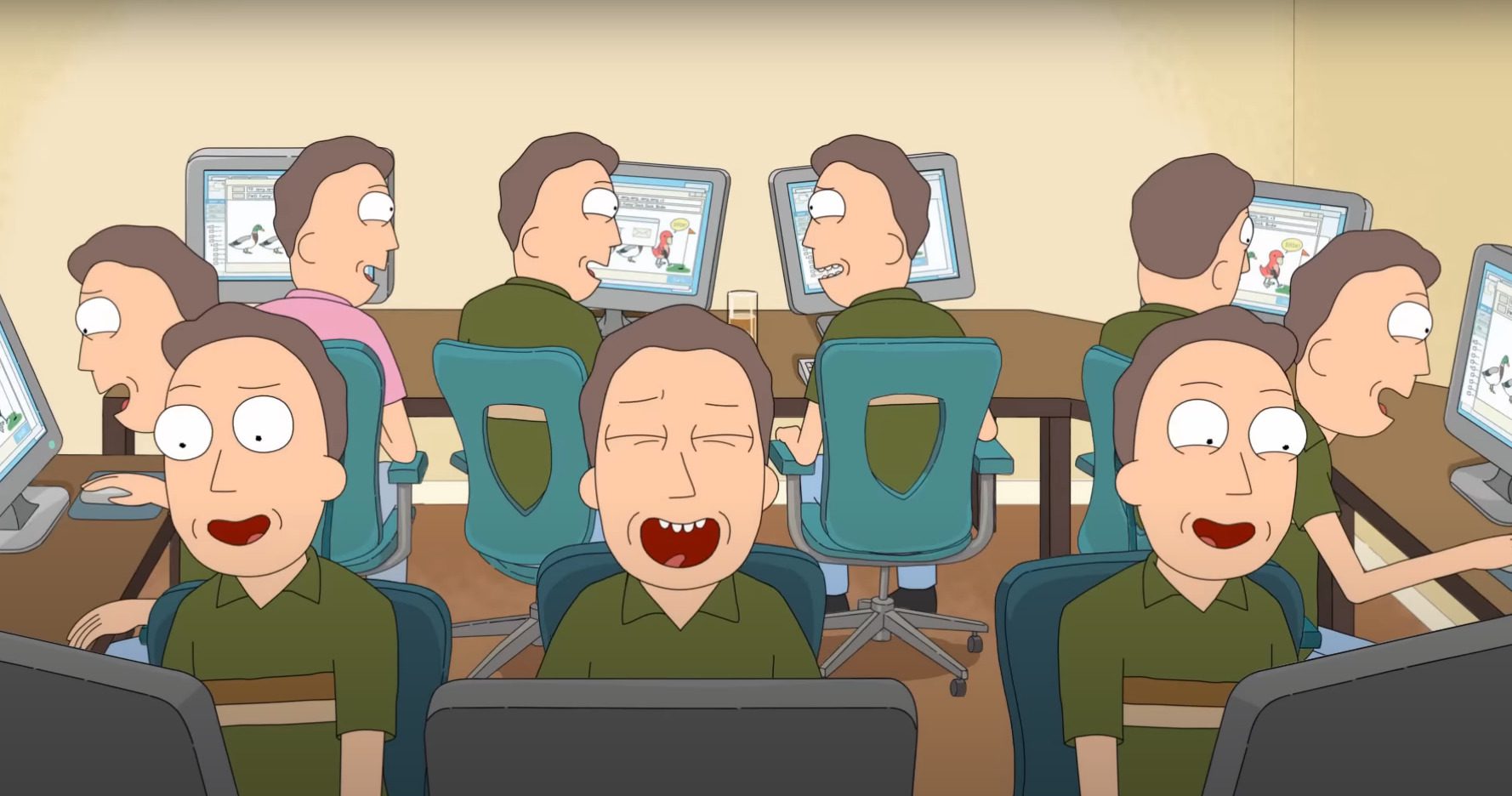 The Boogens And The Usual Suspects

This time, thanks to Rick and Jerry, we have two deep-cut old movie references. When Rick C-137 meets the Cronenberg universe’s Rick, there seem to be a lot of pretaped messages, and what would seem to be the shirtless Rival Rick stuck in a tube. The voice on the taped message teases, “Just a little Keyser Söze.”

That references the movie The Usual Suspects. The opening of Bryan Singer’s film features petty conman Kint talking excitedly about the crime boss Keyser Söze. But at the end of the film, it becomes clear that Kint was actually Keyser Söze all along. Similar to this, we learn that Rival Rick was indeed the Rick in the tube the entire time.

Then there is Jerry from Season 2. Our regular family returns at the conclusion of “Solaris” to find their original Jerry upset that Rick had kept one another “boogens” in the house. This is a reference to the 1981 horror film The Boogens, which shows what happens when a group of strange turtle-like monsters escape from a mine and start causing havoc.

The Downbeat Game And The Batman Reference

Morty finds himself in the Cronenberg Universe after Rick mistakenly uses the portal gun to bring everyone back to their original universes. In this reality, everyone changed into terrifying monsters after Rick made a love elixir for Morty and things went wrong. Since the end of season 3, a lot has changed around the universe. As Morty walks around searching for his family he says sorry for the last time when Summer, Beth, and Jerry were defrosted by officials from the Citadel of Ricks. 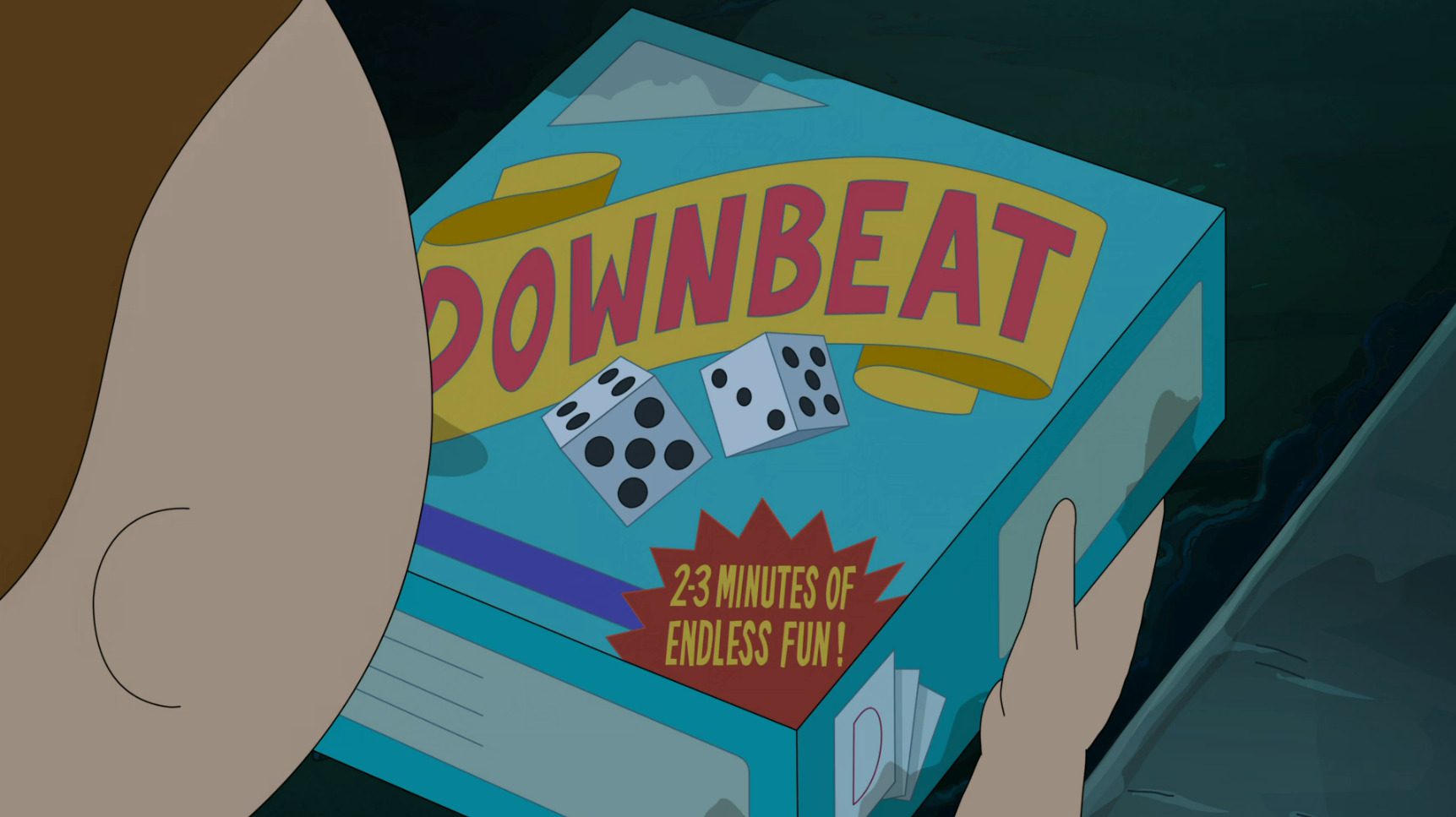 After that, Morty runs into his biological father. Jerry informs us that Summer and Beth died on the ice. Jerry learned how to deal with his circumstance by reading the books “Eat, Pray, Love”, “Four Agreements”, and “The Dark Knight Returns”. Morty, who doesn’t seem to be upset by the news, recommends they play the Downbeat game and says they never got to the end of it. In fact, Rick, Morty, and Summer can be seen playing Downbeat in season 4. Although the game’s packaging states that it will last for two to three minutes, we haven’t yet seen it completed.

After saving Morty, Rick gives up on Weird Rick for the time being and heads off with Summer, and the two Beths to rescue Jerry from his actual dimension. He is eating lunch with his family when we find him, and the mood does not seem friendly. When Rick and Beth arrive at that place, Rick says that he is getting “season 2 vibes.” Jerry and Beth’s relationship was in such bad shape during season 2 that not even space therapy could save it. Although their divorce and subsequent reconciliation was a difficult process, Jerry even says he’s glad they went through it. 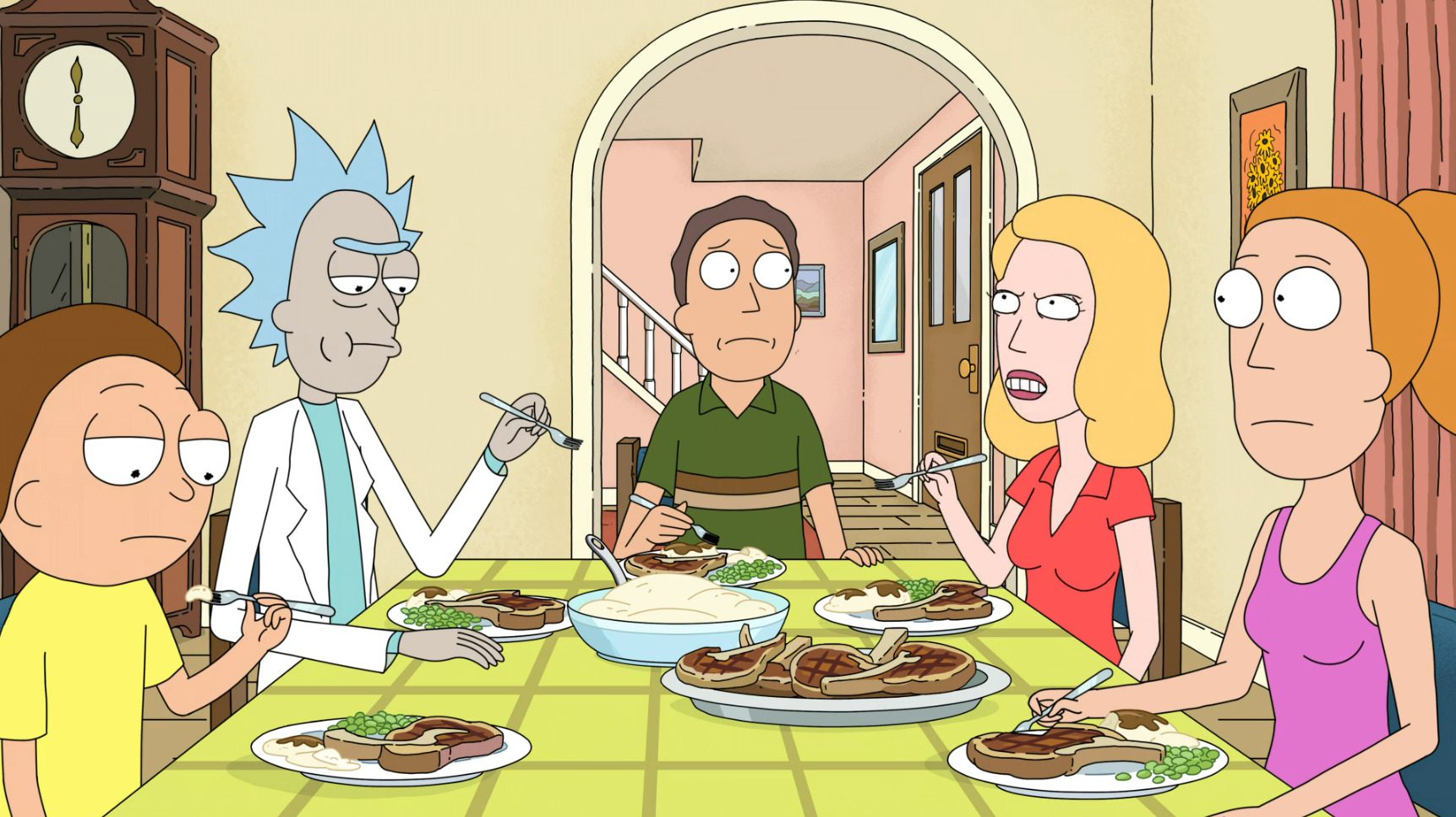 It’s easy to learn more about an episode’s theme by paying attention to its title. Recently, the names “Rick” and “Morty” have appeared in episode titles that refer to other movies, films, and works. These frequently aren’t parodies but rather have a connection to the original work on a thematic level.

The title “Solaricks” in this context relates to “Solaris,” a book by Polish author Stanislaw Lem that has also been made into a movie. The plot is too complex to discuss here, although it touches on issues like facing one’s guilt, past, and psychological trauma. We find out that Rick developed an AI of Diane as a means of self-punishment when he goes back to his home universe, even trapping those who are there in an eternal time loop.

Rick believes he is the smartest person in the universe, but that doesn’t stop him from making mistakes. The Smith family arrives home to find Season 2 Jerry releasing Mr. Frundles, a parasitic being that swiftly wipes out the Earth. The Smiths must now locate a new replacement universe, just as Rick and Morty did following the incident in “Rick Potion #9.” Although Rick didn’t specifically cause this, he did keep Mr. Frundles in the house and screw up the portal gun reset. 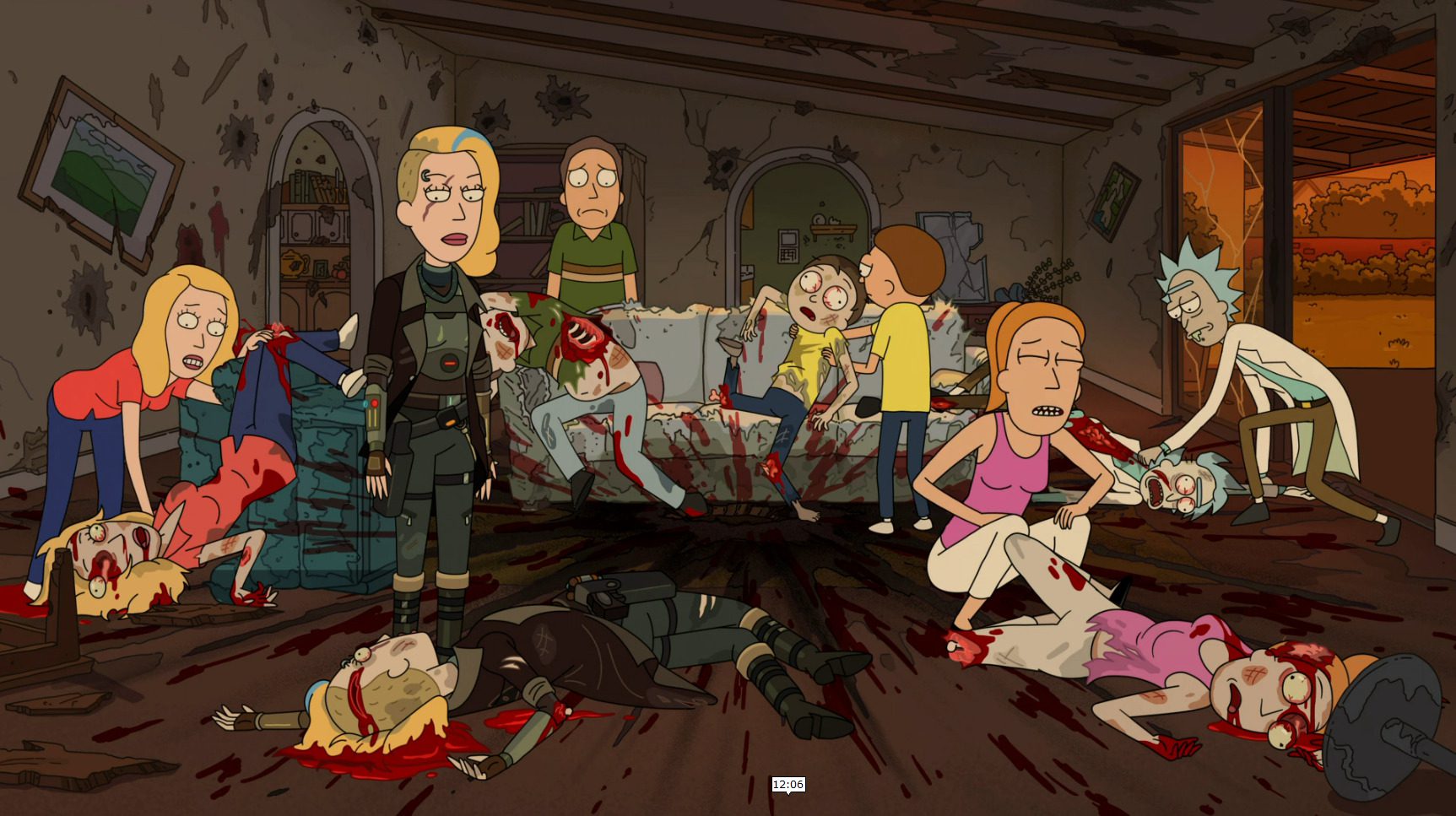 In an attempt to reset his portal fluid, Rick mistakenly resets all transdimensional travelers, causing the regular Morty, Rick, and Jerry to return to their own universes. That means Rick has to revert back to the previously unknown C-137, and the Jerry that was exchanged at Jerryboree has to revert back to a universe where he always fighting with Beth. And Morty goes back to his universe, which in this episode is shown to be the prime universe.

We are aware that the Morty we know comes from the world created by Rick Cronenberg and him for “Rick Potion #9.” But in this episode, when he goes back to his universe, he only discovers a post-apocalyptic version of his father. Morty eventually finds out that he was to blame for his mother and sister’s deaths since they were frozen to death. Even though this situation is shocking, it shouldn’t be. The incident that would bring about Beth and Summer’s deaths during the apocalypse was already shown by Rick and Morty.

In “The Rickshank Rickdemption,” Morty and Summer find the bodies of the first Rick and Morty from that universe and borrow the portal gun from dead Rick to get to Morty’s Cronenberg house. Three Ricks from Citadel appear and freeze Beth, Jerry, and Summer in the Cronenberg universe just before the Hunger Games variant of their own family kills Summer. So yeah, Morty is to blame for his mother and sister’s terribly cold deaths. Moreover, he did refer to them as “backwoods savage morons” just before their death.