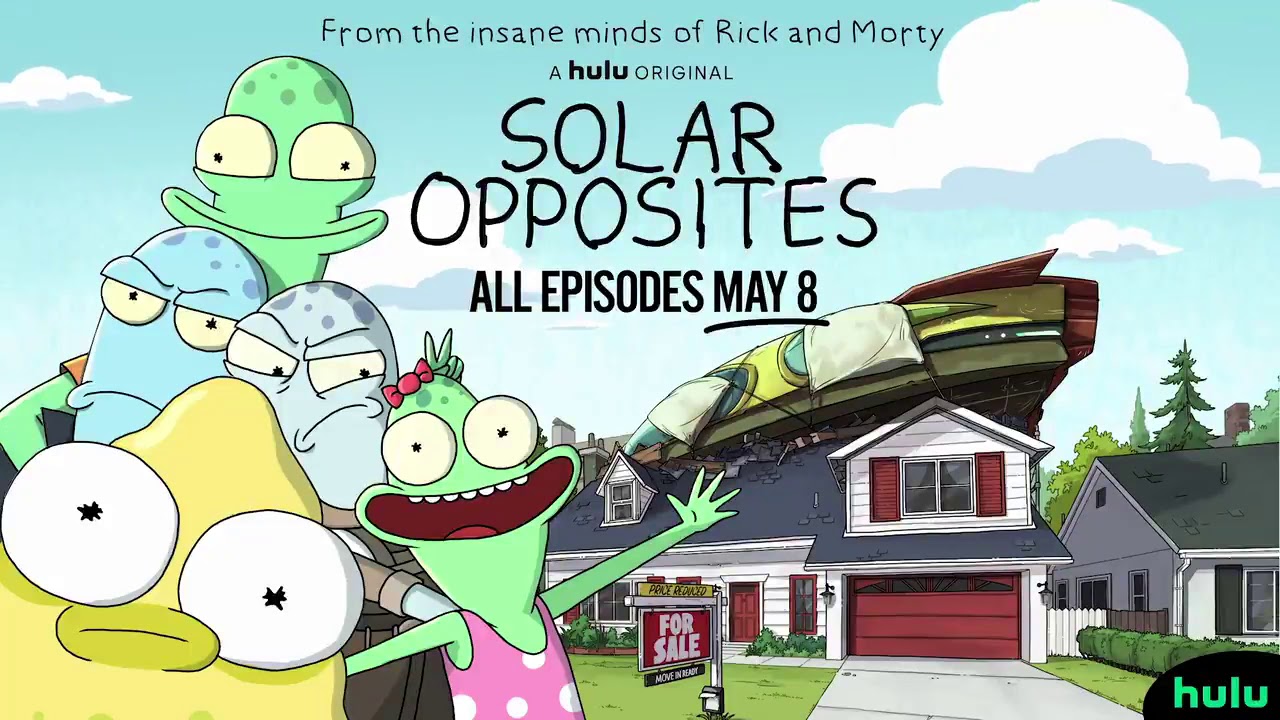 In the fifth episode of Solar Opposites, titled ‘The Lavatic Reactor’, we see the extension of the same previous plot. We are not saying it was terrible or anything. But it wasn’t great either. Especially after we left off at gruesome scene–I mean kids eating the flesh off of their face? Come on! Solar Opposites seems to be getting worse and worse when it comes to violence and dumb jokes. That is the only complaint we have with the show so far. The rest of it is pretty damn good–the character progression, the plot, pacing, and writing. Before we go any further, let us talk about where we left off the previous episode.

Previously on Solar opposites, we saw a shootout happen at a Halloween storehouse; it was bloody. There was a blood bath, and then we saw the highly disturbing visuals of kids scratching their faces. Other than other, Korvo ejected a red gloober which was some sort of sentient spit that represented his stress. This gloober came intending to kill him. In the end, Korvo transferred this gloober to Terry. Gosh, we keep feeling bad for Terry out of the four of them–which also includes the Pupa.

And then, Jesse and Yumyulack tried to wins the hearts of cool kids at school. They tried some weird sci-fic magic tricks such as growing puberty flowers from their head and blowing pollen in the air. That was amazing for starters until it wasn’t. Pretty soon, the cool table got bored of Jesse and Yumyulack, and they were cast off the cool-table. So finally, the two settled with the weirdos of the school. They felt like since they were aliens, they belonged with the weirdos anyway. Coming to the jokes, ah! There were way too many dumb jokes. Like for example, Korvo talking about what he likes to do with older people. All in all, a solid PG-13 episode that one was. Massive amounts of death, stress killing people, kids were trying to make friends with cool kids, and a shootout.

Episode 5 of Solar Opposites is titled ‘The Lavatic Reactor’. Here’s something that the previous episode lacked–way too many pop culture homages and references. As we saw in episode 3–Now You See Me and some such was referenced. This episode had some more pop culture references coming our way. The weirdos went back to school, not Jesse and Yumyulack if you are thinking. We are talking about Terry and Korvo.

Episode 5 was mostly about education and schooling and physical space. Why we say that we’ll talk about it in a mo. As Terry and Korvo joined a junior college. Jesse and Yumyulack believed they were attending summer school. All was well, except there wasn’t much educational stuff, except for a few sci-fi pranks at educational premises. You’ll notice that the show doesn’t want to get rid of the Mad Max stuff. Come on, you guys! 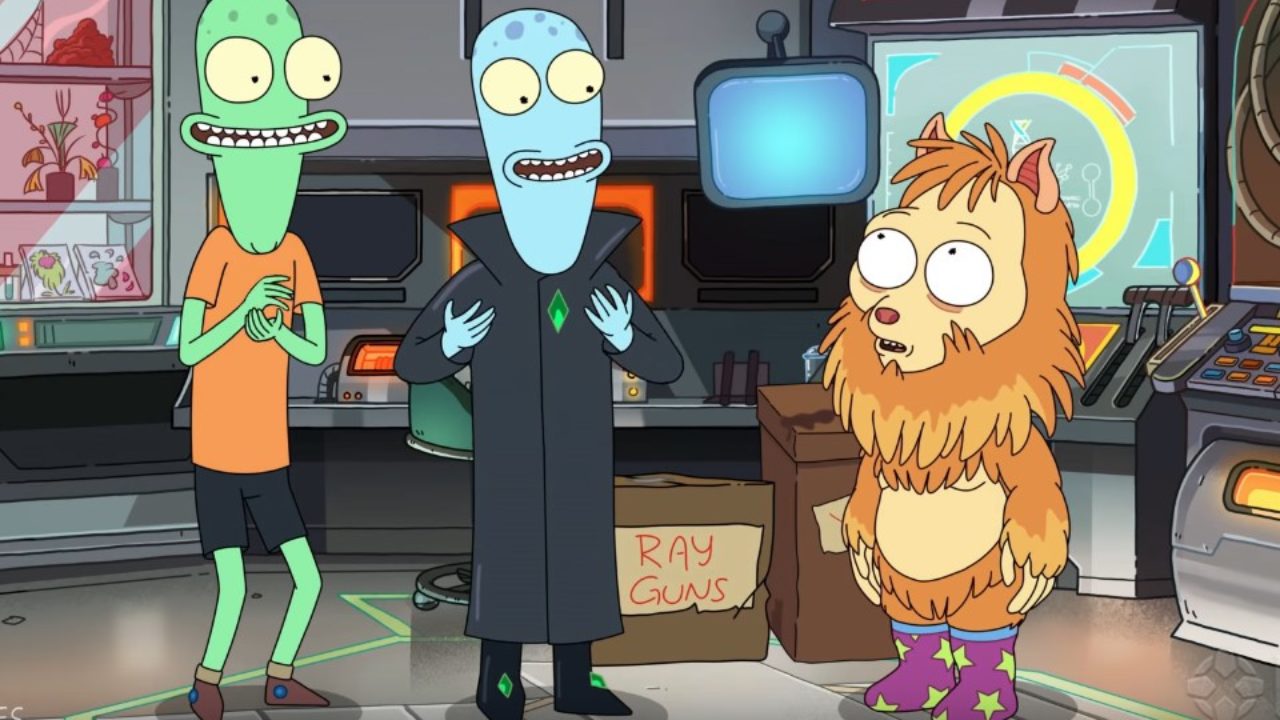 The other plot concerned some shrunken humans, Tim and the rest to a wall by Yumyulack. It essentially was a Tim against the Duke sub-plot. They planned to steal food from the Duke, who has proclaimed himself to be the leader of Yumyulak’s wall. We’ll be honest with you. We do not like this wall-plot. I mean it was okay the first time, but to bring it again and again, ugh. We do not need that. First off, a dystopian thing such as the wall and to have it as a part of an educational premise. Nope, not selling. The third episode gave us enough gags to know all about this wall. We are not having any more of it, is all.

Speaking more of the college-based episode. Terry and Korvo’s junior college is somewhat entertaining. There’s nothing much to it except Terry expects some wild partying to happen on the campus. He keeps talking about movies with wild frat parties. Can ya even blame the aliens on that? One year they have been on Earth and a year later they are enrolled in a college! But as soon as Terry learns that his classmates aren’t into wild parties, he’s just plain disappointed. The students are old who just want to go home and slack off. For Korvo the shirker, that seems an alright thing to do.

They take classes with weird names, such as ‘Theoretical TV/VCR Repair 101’. Many more pop culture references follow. Now, keep in mind their only sources are movies and TV shows (pop culture), hence the referencing gets way too much. We didn’t find anything else worth our and your attention, besides this part.

On the other hand, Jesse and Yumyulack seem to stay at the empty school. The blokes don’t know what a summer break is, so they just stay there. They think it’s some of a test of their commitment to the schooling system, to show how dedicated they are. There are actually scenes where they attend classes, go to lunch, come back after lunch. But when they have no one to teach, their sci-fi weirdos start teaching them. Overall, this plot accounts for good comedy is all we are saying. More referencing follows Yumyulack is Robin Williams from Dead Poets Society and Jesse is the Dangerous Minds kinda-gal, Michelle Pfieffer. 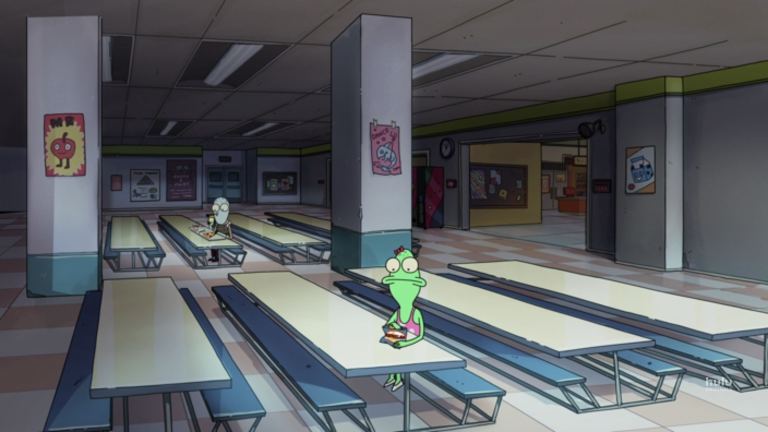 We do not intend to spoil this for you but Elliott Gould is a part of this episode–as a gag we mean. That one is pretty intelligent and decent for everyone’s taste. Your kids can be a party to that, so if your kids walk on you at the time, fear not. But there are some weird jokes concerning the male genitalia. They are the worst kind of jokes, not funny and dragging. The storyline itself drags in this episode, especially when the guy says he fears his genitalia (penis) getting blown off during an explosion. What even? Sorry guys, that’s not funny at all.

We just have one last thing to say before we wrap up, episode 5 so far seems like a weak episode, in comparison to the previous 4. Let’s hope it catches up pretty damn soon.