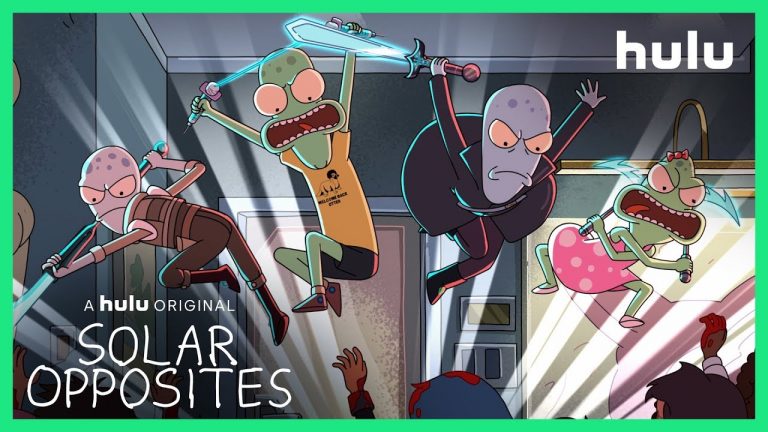 Hey folks! Finally, we reach the review of episode 7 of Solar Opposites. The episode is titled, ‘Terry and Korvo Steal a Bear’. Why of course, why wouldn’t they steal a bear? to perform some kind of weird experiments on the bear, we think. Now, before we begin with episode 7 review of the HULU Original Solar Opposites, we need to go through the highlights of the previous episode, i.e. episode 6. The episode was majorly centered around gender and a mombot need Patricia. As always it ended in carnage, whereby Patricia went on a rampage of the whole city. Koalas were freed from the Australian zoo, one was seen in the background of Patricia’s rampage. The scene didn’t make much sense until we reached the Koala conclusion.

Episode 6 was titled The P.A.T.R.I.C.I.A. Device. Jesse began school, only to learn the key role that gender played in school Like, she was the only girl who was taken for a boy in the gamer club. No one could recognize who Jesse was, or what she was up to. The fact that she wore a bow tie made people think that she indeed was a boy. We’ve made a clear point that we are sick of the wall-based hijinks in Solar Opposites. It was cool for the first time, and the second time but it became awful seeing shrinking people into the wall. We’ve seen Yumyulack (Sean Giambrone) shrink people for six straight episodes now. It’s sickening to see these shrunken people trapped in a terrarium. The wall is in his and Jesse’s (Mary Mack) bedroom. This side plot is getting heavy, it is not funny anymore, you guys! If you must, give us a full-wall episode. And that’s what we got finally.

It’s finally time we pick up and discuss the penultimate episode of Solar Opposites. In case you haven’t watched it, out strong suggestion would be to drop this episode review, since it is riddled with spoilers. One thing that we’ve to admire in Solar Opposites is no matter how weak the episode is on humor, the climax is hilarious to the hilt. It reaches an ultimate conclusion of carnage and dumb jokes and that’s what we have gotten used to.

Finally, the previous plots make sense and we feel like it was totally worth it, worth sticking to Yumyulack’s wall since we get a peek into the actual thing. Safe to say, this was the funniest episode of the season. Well, I think we all knew everything was leading up to this. Finally, it all pays off. Finally, we get to watch Terry and Korvo steal a bear. This is the major plot of ‘Terry and Korvo Steal a Bear’. In the background, there is a bear plot but in the foreground, there is an actual human terrarium society inside the wall. People like me find this idea disturbing. We find it so because we’re scared of patterns, things put together, it gives us the creeps. So does this wall.

Every shrunken human has organized itself into a community living inside Yumyulack’s wall. The wall people story wasn’t so funny the last time, but thankfully that isn’t the case this time around, things have changed in this episode. Had we know all it took was full-length wall episode to keep us from creeping out, we wouldn’t have ranted so much. Other than that, this episode is a serious business. It is not funny to see people trapped in a wall by a Nazi-style leader. The episode speaks to us from those living inside the wall and not those outside it. So it isn’t so much about Yumyulack’s perspective but those vying to overthrow him and free themselves.

The thing is resistance is growing inside the wall. People are resisting to exist. And the other thing is that, besides this resistance, there’s a boiling rebellion. You know how we say we love the carnage in Solar Opposites, we think the climax will be a full-blown crescendo this time around and the wall people will be the center of it all. We’re so thrilled if it comes to that. But saving the wall for the penultimate episode definitely means that the ultimate episode is going to be about revolution and overthrowing Yumyulack, the Nazi. It’s going to come to Tim vs. Yumyulack showdown. The resistance leader is Tim of course, supplementing him is a mouse milkman who is patterned on the former CEO of AT&T. There are other characters such as  Jean-Pierre and Christina Hendricks. And oh, we feel like we may have seen the hipster doofus from Seinfeld inside the wall. Which shouldn’t;t be a surprise, considering a loudmouth like him must have said something unpleasant. The yada-yada-yada is why we think the guy is Kramer.

Now keep in mind these aren’t just miniaturized people, but they are rude. Guessing how they ended up there, these people are rude as hell. We are being told that Roiland and McMahan worked on this wall idea a long time ago. It was during the seasonal break of Rick and Morty that Roiland and mike were thinking about their next project, the Solar Opposites. Justin Roiland says that the wall reference was derived from the wall in the kids’ room which sort of looked like a fallout shelter. That’s how the idea was derived.

By the time they had reached episode 7, Roiland and McMahan left like the humans-trapped-inside-the-wall had become huge enough to deserve a huge explanation. Up until that, it only felt like a tiny little prank. And hence, it deserved an exploration. The point that Justin Roiland stresses on how a dystopian wall sort of a community of humans would look like. What if the entire humanity was shrunken into a wall, what would happen then? How would they live and organize themselves, what kind of rules and regulations, currency, and caste system? Who would rule? This is the essential plot behind Solar Opposites and why the decided to do the show in the first place.