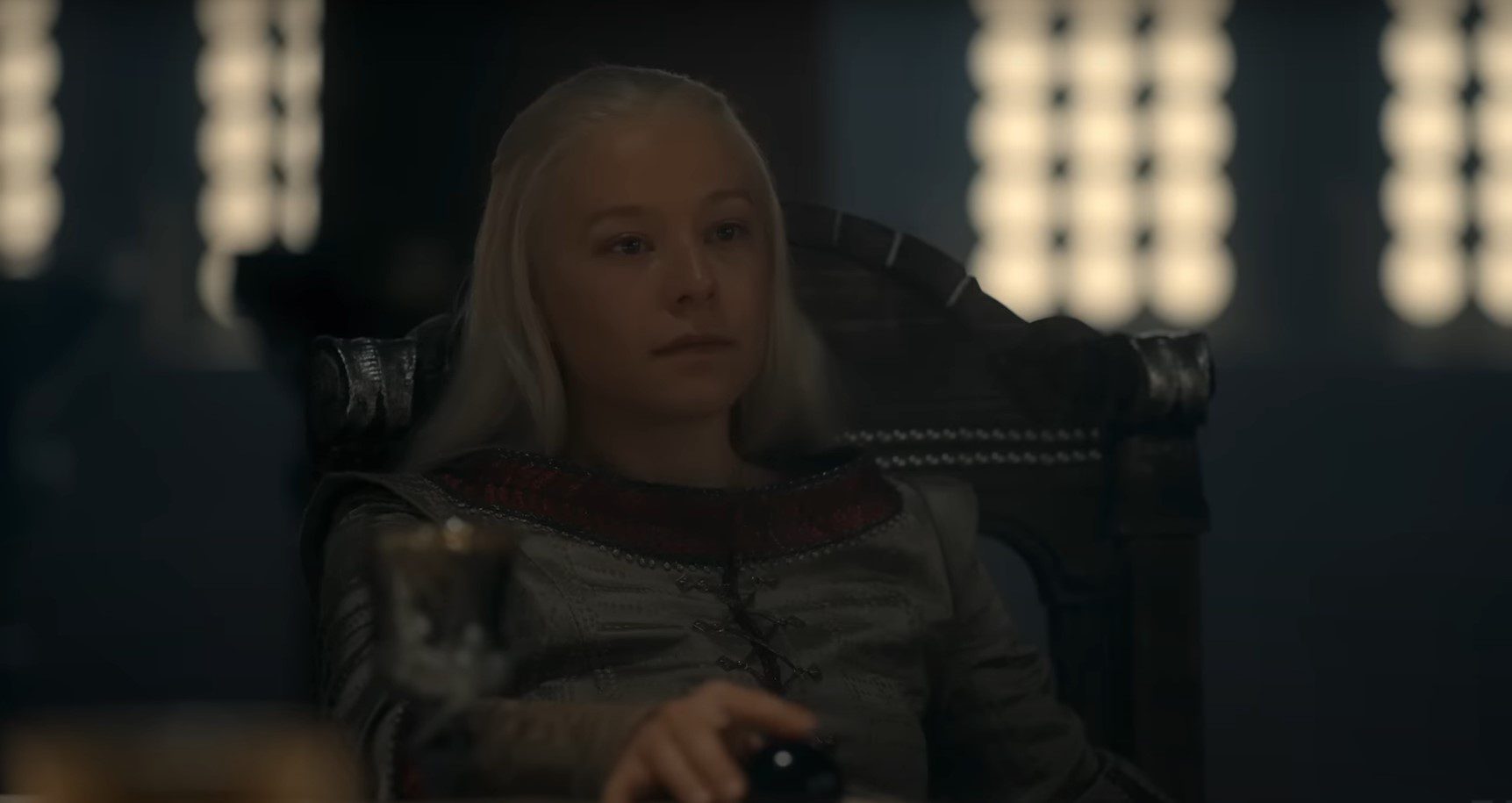 Ok, the House Of The Dragon Episode 6 Trailer Explained. Therefore, House of the Dragons is going to make a significant time jump of ten years, picking up years after the events of episode five. Two of the important characters have also been recast, and I love how the series has changed from discussing who the real heir is to establish who the real Rhaenyra and Alicent are. The episode 6 teaser has a lot going on, and we’re going to break it all down and go over what we anticipate will happen based on the book throughout this article. Because of this, there will be significant spoilers, so if you don’t want anything to be spoiled, I advise you to turn it off right now.

In House Of The Dragon Episode 5, we say Viscery Targaryen going to Corlys Velaryon to propose marriage. Both the parties agreed upon the terms that Rhaenyra and Laenor’s kids will be born Velaryon but when they grow up to become the ruler they will rule as Targaryen. Not this is the term that will be important to look on through Season one. Because there will be Rhaenyra’s kids but it won’t be Laenor’s. And other people will try to capture this opportunity to take the throne for themselves.

The events of episode five are picked up ten years later. Caraxes, a.k.a. Daemon’s dragon, appears in the opening scene, and we discover that he and Laena have gone to the Stepstones. They have multiple kids together, and although though she was originally going to marry someone from Bravos in the books, Daemon killed them so he could wed her instead. 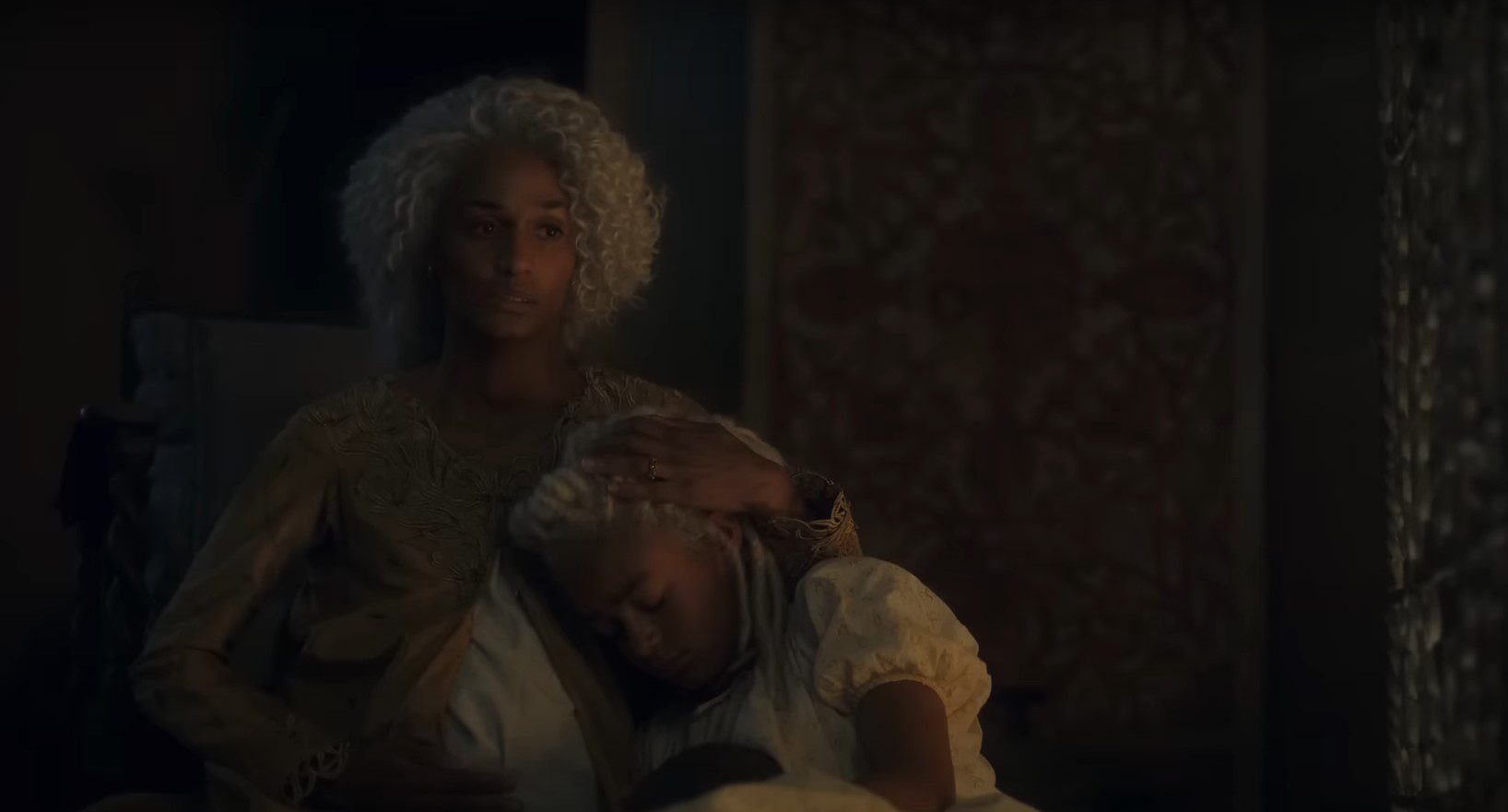 The couple had 2 kids including Rhaena and Baela, the latter of whom was named after Viscery and Daemons’ father Baelon. Laena appears to already have one child and be expecting another, but this could turn out to be the couple’s third, which would have resulted in a terrible tragedy.

Viscerys collapsed at the end of episode 5, but now we find that he is still alive and well ten years later. Although I was aware of what happened to him in the novel, I believed that they had adjusted the timeline and killed him off sooner than they had in the book. He is still here despite the time jump, even though he is very weak.

You may have noticed that he is seated in every scene in the trailer; this is because the sickness nearly rendered him immobile as a result of its invasion of his body. Recently, Paddy Considine clarified that this is in fact a kind of leprosy. Anyway, stuff is beginning to cover his face, and he looks just like I do after sitting up until 3 a.m. to write down breakdowns of 2100 words.

The big thing Viscerys is getting angry about in this teaser is that people keep suggesting that Rhaenyra’s children are bastards and that they don’t actually belong to Laenor who she wed in the latest entry. Now to set the stage the books go into this in a lot more detail and they said that after Criston Cole rejected Rhaenyra that she ended up running off into the night which is where she bumped into Harwin Strong. 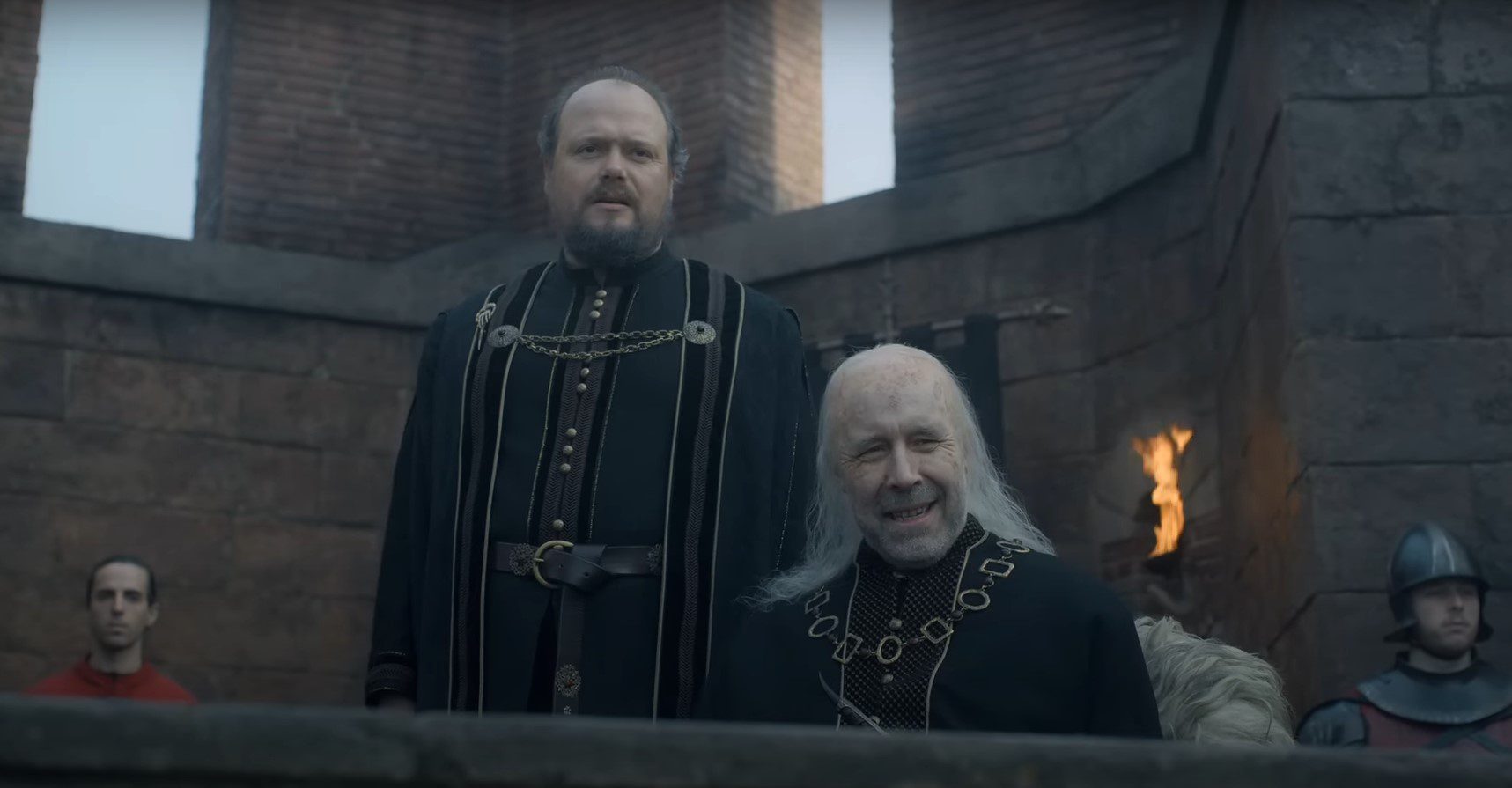 He ended up taking her virginity and due to her marriage with Laenor having a hall pass in it she started to have an affair with him. Though Criston turned her down he still loved her but this and the wedding proved too much and he ended up growing bitter and twisted. This pushed him to become Alicents royal protector and he became a staunch supporter of the Greens.

Harwin became Rhaenyras’s lover and the pair ended up having several children together. Now why this caused a lot of issues because she’s of course married to Laenor but you could see that the kids weren’t related to him at all. The Valeryons of course has long white hair and I think they might even tie it into the character’s race. Though there were the cries of the show going Woke when the Valeryions were revealed I actually think this adds another dimension to it.

Rhaenyras kids are whiter than Jesy Nelson and they don’t even have a little mix so it’s clear that they’re Harwins which is the big rumor that Viscerys has to shut down this week. Kinda feel sorry for the guy and know this of course angers Alicent and her kids whom we see several of in this new look. They all knew that the kids are bastards and therefore illegitimate but they’re actually regarded as being the next in line due to the promise made to the Valeryons. 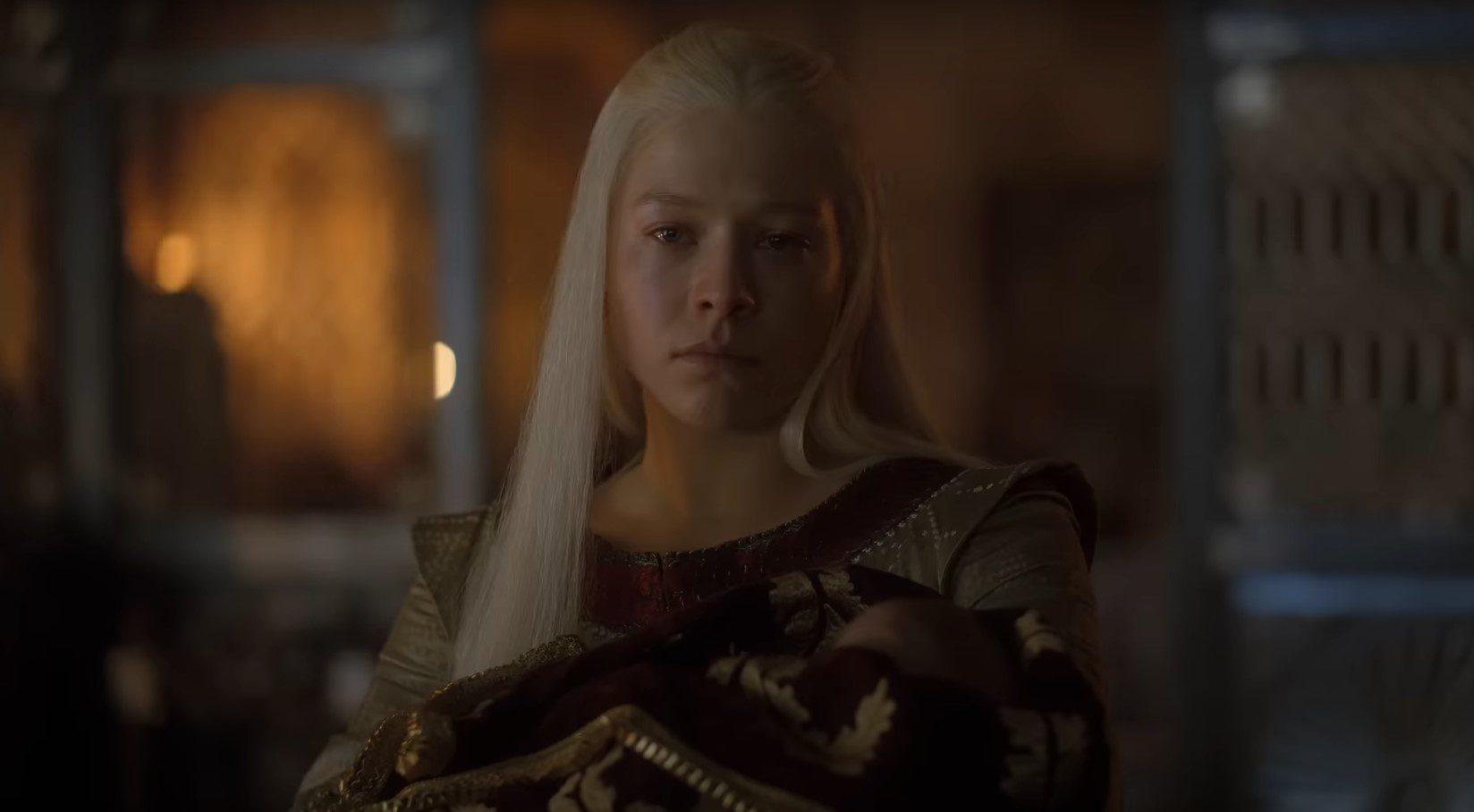 It causes a lot of problems and I think we might even see Harwin strong striking Criston at one point. In the books, Criston ended up kicking the crap out of him at one of the wedding tournaments and he broke both his collarbone and elbow. This led to him being called Harwin Breakbones and they should call me Harwin Breakdowns.

Ironically Harwin and Rhaenyra could’ve been married without all this controversy surrounding them if his dear old dad had suggested him as a suitor during episode 3. Harwin is known as the strongest man in the seven kingdoms and he’s gonna be a big character going forward.

Eye For An Eye

Alicent is still wearing Green and her and Rhaenyra are now clearly enemies. In the books, it was said that the pair never got along but I’m glad they made them friends first so that we get even more drama when they fall out with each other. I believe that we see Aemond in this teaser and that they mix some of the things in with Aegon including the scuffle that they have with Joffrey.

Joffrey Lonmouth was of course Laenor’s lover and they ended up naming one of their kids after them. One night Aemond snuck down out of bed to attempt to ride the Dragon Vhagar and Joffrey ended up popping up and shouting at him. Aemond called him a strong and he kicked him into some Dragon Manure before he jumped onto Vhagar. This kick seems to be carried out earlier in the day by who I believe is Aegon. Lucerys Valeryon ended up cutting out Aemonds eye because of this and he was later known as Aemond one eye. 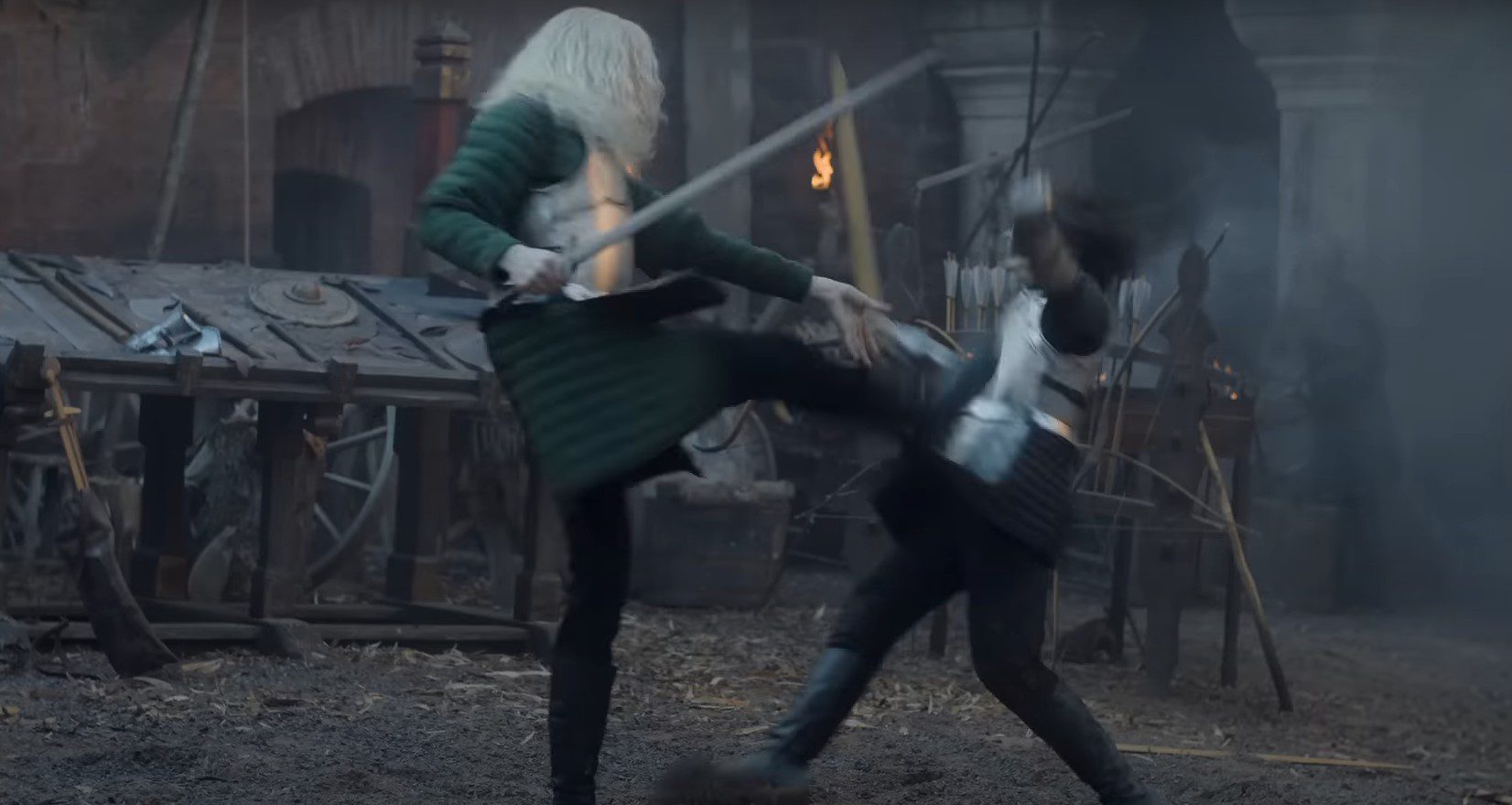 Alicent demanded that his eye should be cut out as well which I think we might see playing out here. It was very much an eye for an eye but Viscerys said that there would be nothing of the sort. In the end, Aemond said that he lost an eye that day but he gained a dragon so it was a fair trade-off. However, the rivalry continued with them still not believing the children were legitimate heirs. Because of this Rhaenyra demanded that anyone who said such a thing should be thought of as committing treason and we get a potential nod to one of the punishments.

In the book, we have a picture of the eye getting cut out and also the punishment for anyone who called them strong. This included cutting someone’s tongue out who said it and as I’m sure you can guess, people just couldn’t keep their mouths shut.

So this of course ended up happening which I think we could get a tease towards. It was during this that the King had it carried out on two people and he slipped and sliced his hand on the throne. It was at this point in the story that he got a fever and had his fingers removed whereas in the show it’s happened a lot earlier with none of the Strongs being born at this point.

The Fight For Being The Heir

Now rumors of course still persisted about this punishment and I think that a lot of it will happen in this upcoming episode. Obviously, the Targaryens have bright blonde hair and the Valeryons have white so it’s gonna be pretty easy to tell that they aren’t either of the bloodlines. I think this is what angers Alicent so much as she’s well aware of the illegitimacy of it and it’s even more frustrating because she and her father gave a lot up to get their kids on the throne. 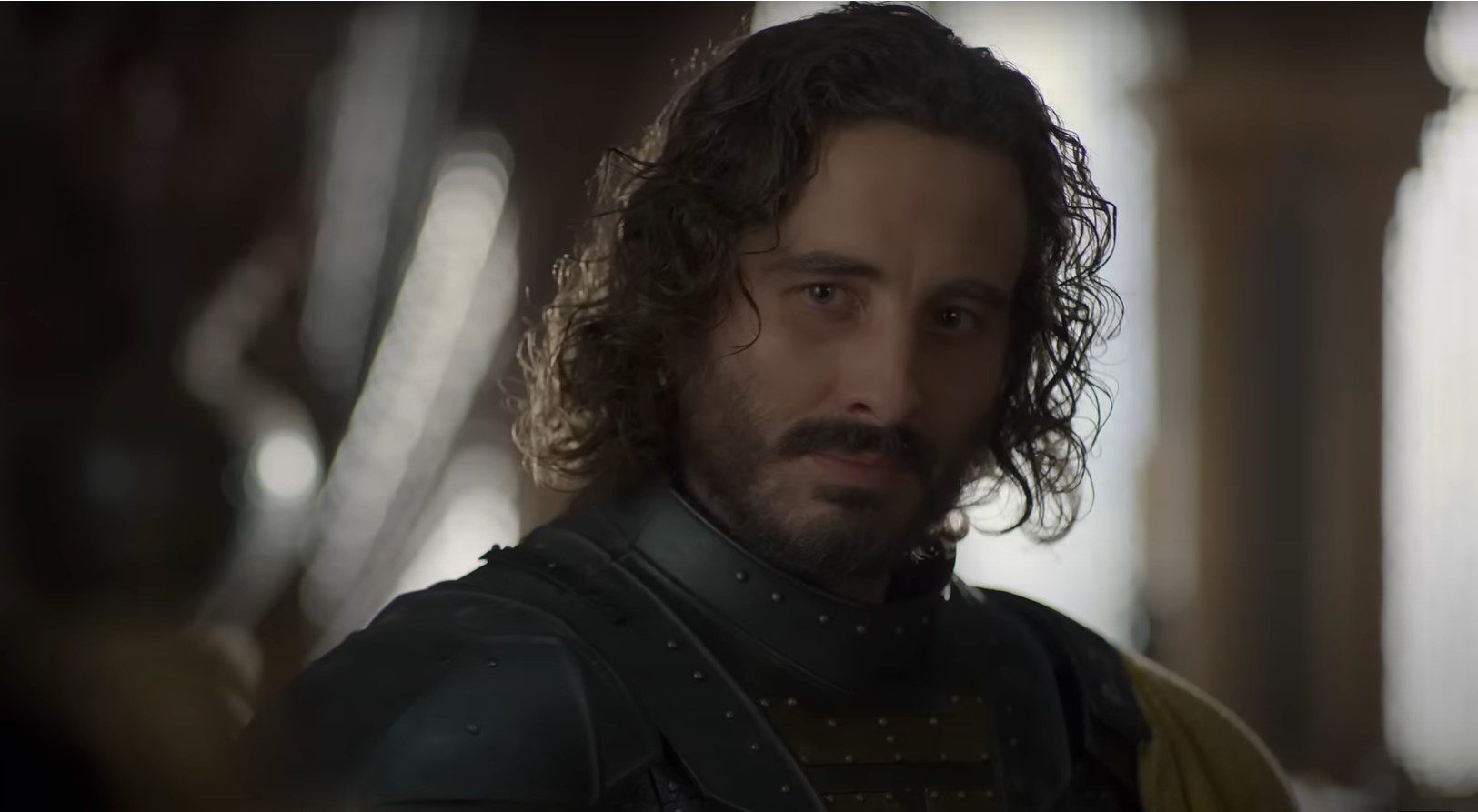 Now on the other side of this is Daemon and his wife whom to see themselves as being legitimate. We even see them getting Dragon eggs, which were placed in the Targaryen children’s cribs to form a bond. This is something that Daemon wanted to do for the child he wanted with Mysaria but it was taken away from him. I think it might be the same egg that was going to be used on the Heir For A day Baby Baelon and somehow Daemon has managed to get it back.

Either way, this is setting up a big event in the timeline called the Red Spring in which several of the main characters die and it leaves some of the others having to marry and form alliances in order to keep things strong. Harwin Strong. Nah got nothing to do with him but they are definitely setting up a lot of things here. I am interested to see how it all plays out and I hope that the recast works out even though I would’ve preferred the two main girls to have just been aged up with makeup.

May It Please The Court Episode 3 Release Date: On The Complicated Cases