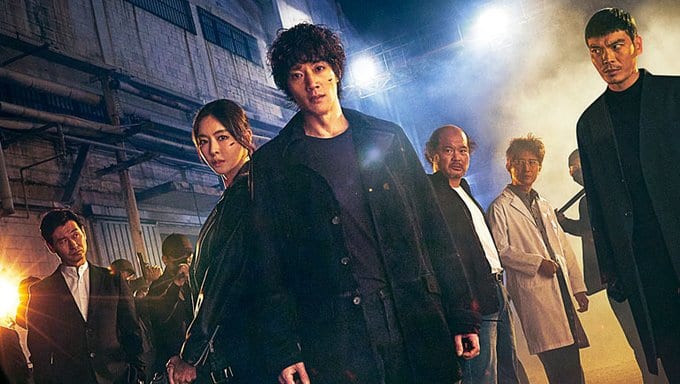 ‘L.U.C.A. The Beginning’ is a new South Korean TV series that is going to make its premiere in February, and it is highly anticipated because of the subject it derives its themes from. L.U.C.A. The Beginning is based on Charles Darwin’s theory, which states that all life on earth descended from common ancestors.

From what we know about the show so far, L.U.C.A. the Beginning is going to be packed with an interesting storyline, a stellar cast, and from what we can see in the trailer – impressive cinematography and soundtrack. The acronym ‘L.U.C.A.’ stands for ‘Last Universal Common Ancestor,’ – you can see where the Darwin theory comes in – as the show is based on the idea of genetic modification and human evolution, and fans are more than excited for the show to drop.

L.U.C.A. The Beginning Release Date & Where to Watch

The first episode of L.U.C.A. The Beginning is scheduled to release on February 1, 2021, as part of the lineup of new K-dramas starting in the second month of the year on tvN. You can watch L.U.C.A. The Beginning on Rakuten Viki as the show is available exclusively on the streaming service. Episodes will air every Monday and Tuesday with a runtime of 60 minutes on the tvN network at 9 PM KST (Korea Standard Time). The show is slated for 12 episodes.

The story revolves around our protagonist Ji Oh (played by Kim Rae Won), who is born strong and thrown into the unknown world of genetics. Ji Oh seldom shares his feelings with other people, but he has a special power inside of him. Because of keeping this enormous secret, he has an identity crisis and struggles to come to terms with who he really is. He is hunted by figures that are shrouded in mystery as he tries to understand what’s happening around him.

Gu Reum (played by Lee Da Hee) is our other principal character who gets her life tangled with Ji Oh. Gu Reum is a detective who has a very staunch personality and doesn’t change her decision on something she sets to do. When she was a child, her parents disappeared, leaving just her behind. Now, Gu Reum tries to unravel the truth behind her parents’ strange disappearance.

L.U.C.A. The Beginning centers on an experimental cell organism called J Oh, which was created via the L.U.C.A. project. Ji Oh is created as a Last Universal Common Ancestor, a cell that holds all the secrets to life on earth. Ji Oh is then able to take human form and is also equipped with supernatural powers, but loses his memory from a huge accident when he’s escaping from the laboratory. He is now on the run as multiple organizations are after him to make use of his superpowers.

The show is based on the theory of Darwinism, developed by the English naturalist Charles Darwin. Darwinism is a theory of biological evolution that states that all the different species of organisms on earth have arisen and developed through the natural selection of species. While the meaning of Darwinism has changed over time, it basically has mainly to do with evolution. 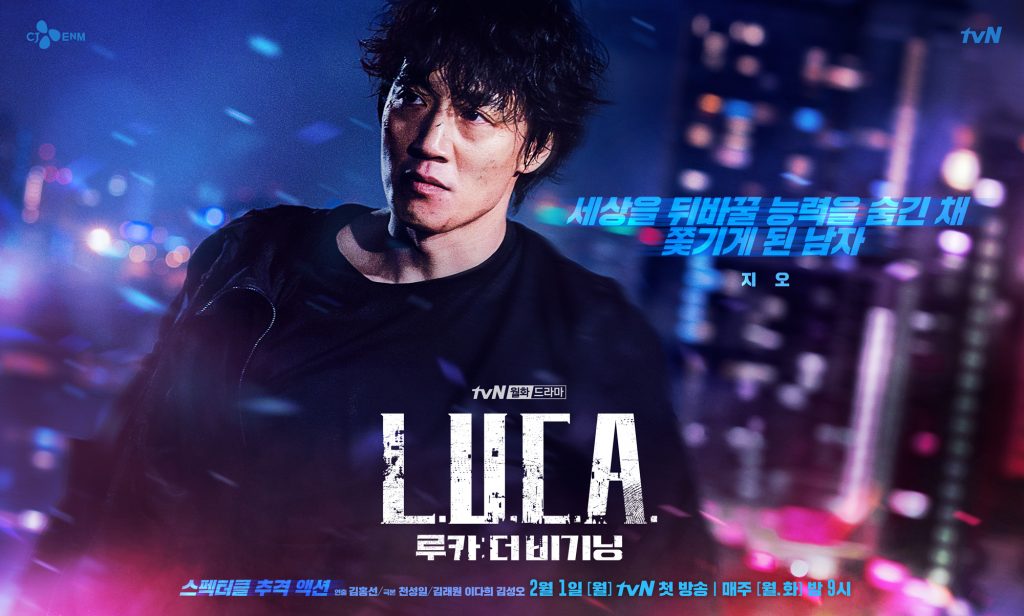 Kim Rae Won will play the leading character of Ji Oh in L.U.C.A. The Beginning. The popular actor rose to fame with his acting in The Doctors, Punch, A Thousand Days’ Promise, Gourmet, Love Story in Harvard.

Ji Oh is being chased by mysterious forces due to his special abilities. He lives a lonely life, pretending to be a human even though he does not feel like one. Waking up from a huge accident, he can’t seem to remember who he is and what happened with him. He meets Gu Reum by accident.

Kim said during an online press conference on Wednesday that he became interested in the show after seeing screenwriter Chun Sung Il’s script, and as he enjoyed director Kim Hong Sun’s previous work The Guest, L.U.C.A. the Beginning was too tempting of an offer for him to pass up. He also added that he could not completely understand his character, even after the entire filming of the show was wrapped. 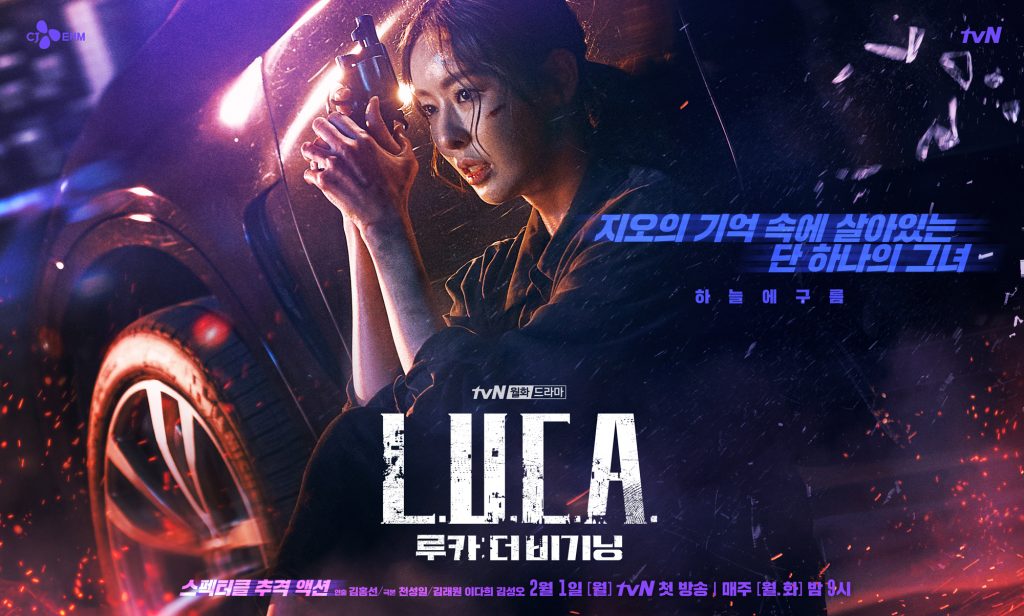 Lee Da Hee, the 35-year-old model, and actress who had her breakout role in the 2013 SBS courtroom drama I Can Hear Your Voice plays Gu Reum. She is also known for her role as Kang Sa Ra in The Beauty Inside (2018) and Cha Hyeon in Search: WWW (2019).

Gu Reum is the only woman that Ji Oh remembers. Her parents disappeared without a trace when she was young, and she grows up to become a detective who is transferred to the violent crime section.

Lee said that she wanted to try this type of drama, and after coming to know that it was directed by someone who specializes in the genre, she was all for it. 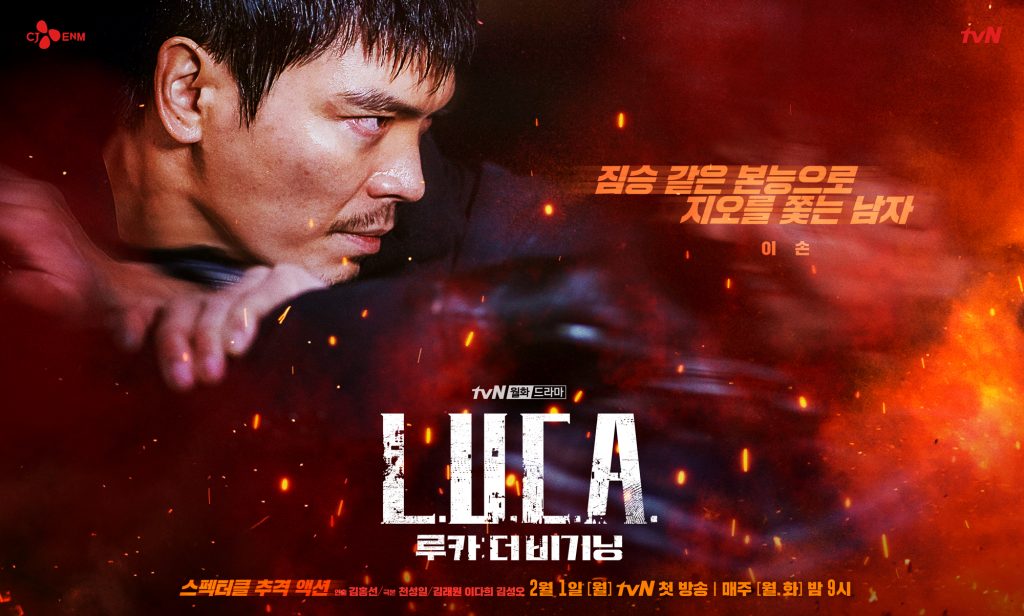 Kim Sung Oh is known for his supporting roles in Secret Garden and The Man from Nowhere. He plays a man chasing Ji Oh like a beast. He is one of the secret agents that are after Ji Oh. Lee Son has been after Ji Oh for a long while but is unable to get to him. This time, however, he made life-threatening decisions to catch him.

Kim said that after reading the script, he felt that he would enjoy the show if he saw it on TV. He is not sure if ‘villain’ is the correct word for his character, Yi Son. He added that his character is very good at running and fighting, and even though he is chasing Ji Oh, on the inside, it felt like he was trying to find the meaning of life.

Below is the trailer for L.U.C.A. The Beginning: