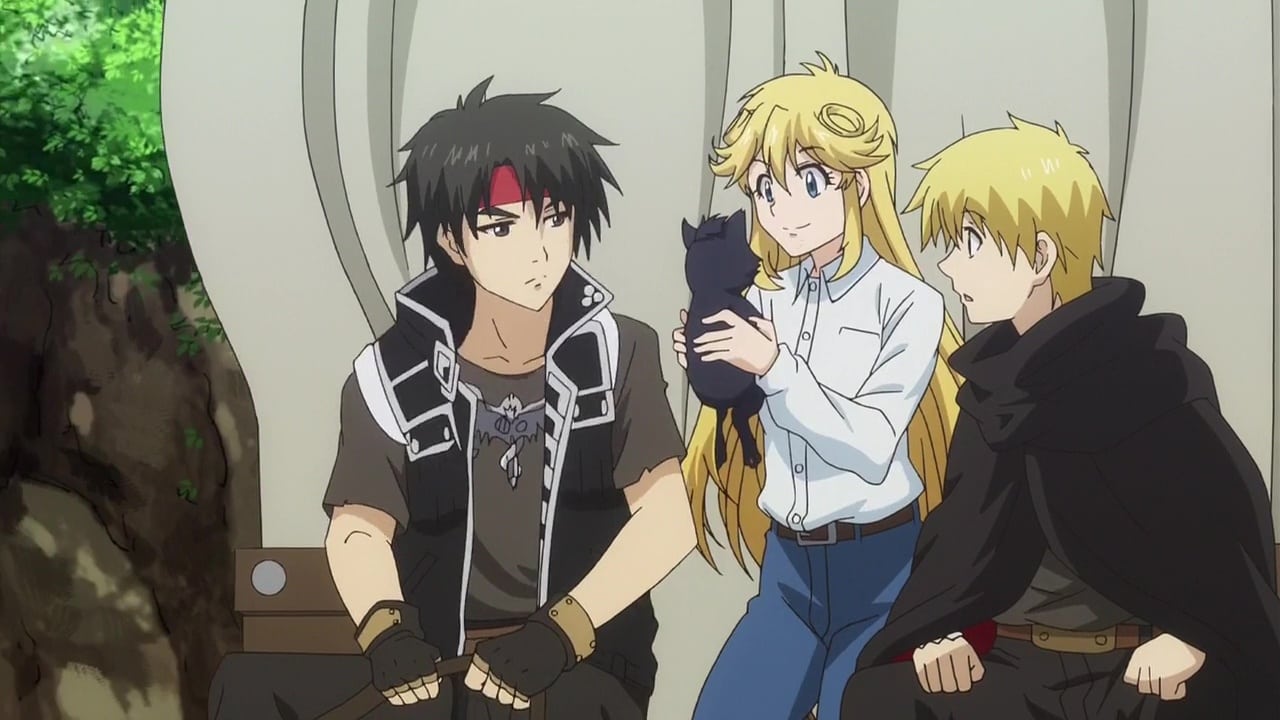 Orphen, Claiomh, and Majic are with Name, who is leading them in the underground passage. He asks if the passage leads them to the Cathedral, and Name replies, yeah. Orphen realizes that he was told not to let his guard down with Laniote since Laniote cannot be trusted. Orphen is trying to focus on Name, but the two distract him. Majic talks about how huge the underground is. Suddenly Majic jumps into Claiomh after hearing a cut of something.

Orphen comments that the old geezer has just cut the rope so that no one will follow them. Name comments he believes that no one knows about this passage. Claiomh punches Majicfor holding onto her breast. On their way, Claiomh teases Orphen that he is trying to act like he knows the place. She told him not to be ashamed to admit that he doesn’t know and he must confess. Orphen just yelled at Claiomh to shut up.

Sorcerous Stabber Orphen: Battle of Kimluck Episode 6 will be available on-screen on Wednesday, 17 February 2021, 9:00. It will be also available on AnimeLab and Funimation.

Name told them to walk silently, and Claiomh asks why. He said the debris of this underground passage fills with water quite often. The noise will make them experience a flash flood. Name reveals that no one has taken the time to repair this place. Name stumbles and touches a block that has a symbol of something. He apologized, but he knows what he was doing. Orphen and the other did not notice what has happened.

Majic is wondering why there were so many soldiers earlier. Name comments that the Cathedral sent out some soldiers after the chaos they made yesterday. He thinks that the soldiers have been targeting that shop for a while. Orphen hear a sound of water making noise just like a flood. Orphen tries to warn everyone, but it was too late, and the water swept them away. After the flooding has stopped, Orphen wakes up and finds that he got separated from others.

Orphen tried to call them, but he just heard an echo of his voice. Orphen decides to call upon thee, Tiny Spirits, but Name appears behind him. Name comments that the two got blow away because they are weak. He thinks that they got blown away much further than he can expect. Orphen comments that he is feeling better than Name didn’t find Majic and Claiomh. First, it was Salua, then Madchen, and he is wondering why everyone is missing.

Orphen asks Name if he has a manual that tells how to lie about who he is in Kimluck. Name comments that he thought he had done better than Salua. Orphen reveals that he knows that the moment he said his Name is Krylancelo, he knows Name, and others will react. Name aks Orphen when did Orphen notice it, and Orphen said that he compose a spell and then release it for him to use Sorcery. He also reveals how he fooled Name to get the truth.

Name said that he was trying to be a convincing Sorcerer, but he failed. Orphen ask why he was acting like one of the people from the outer city. Name said he did that to find anyone who may try to cause an uprising against the Kimluck Church. He thanks Orphen that he was able to lure out potential threats. Outside the underground passage, people who were supporting Orphen are killed.

The one who cut the rope is the one who is working with Name. Name thinks that he has laid the perfect trap for Orphen, who asks him if this is part of his plan. Name’s allies circle Orphen and Name comments that Orphen cannot enter the Holy city on his own. Name draws a glass sword since Orphen knows his fake name; he said his Name is Name only. He reveals that he is one of the Death Instructors and the protectors of Kimluck.

Meanwhile, Majic wakes up on the other side and finds that Claiomh is injured. Back to the battle, Orphen summons Blade of Demons and cuts the glass sword in half. He sends Name flying by kicking his chest, and he escapes to save Claiomh and Majic. Name comments that he won’t let Krancelo escape, and itis impossible to escape the underground passage.

Two of Name’s allies manage to find Claiohm and Majic before Orphen. At the same time, Name uses teleportation and catches up withOrphen. Orphen tries to attack with a Sword of lightning, but Name keeps on vanishing. Name stabs Orphen using teleportation, but Orphen use Sorcery to heal himself. Orphen uses his natural ability and punches Name with a blow that opens his stomach. Majic managed to use Sword of light for the first time and defeated all of Name’s allies.

Spoilers and Recap: Seraph of the End Chapter 100

How To Watch The Demon Slayer Movie