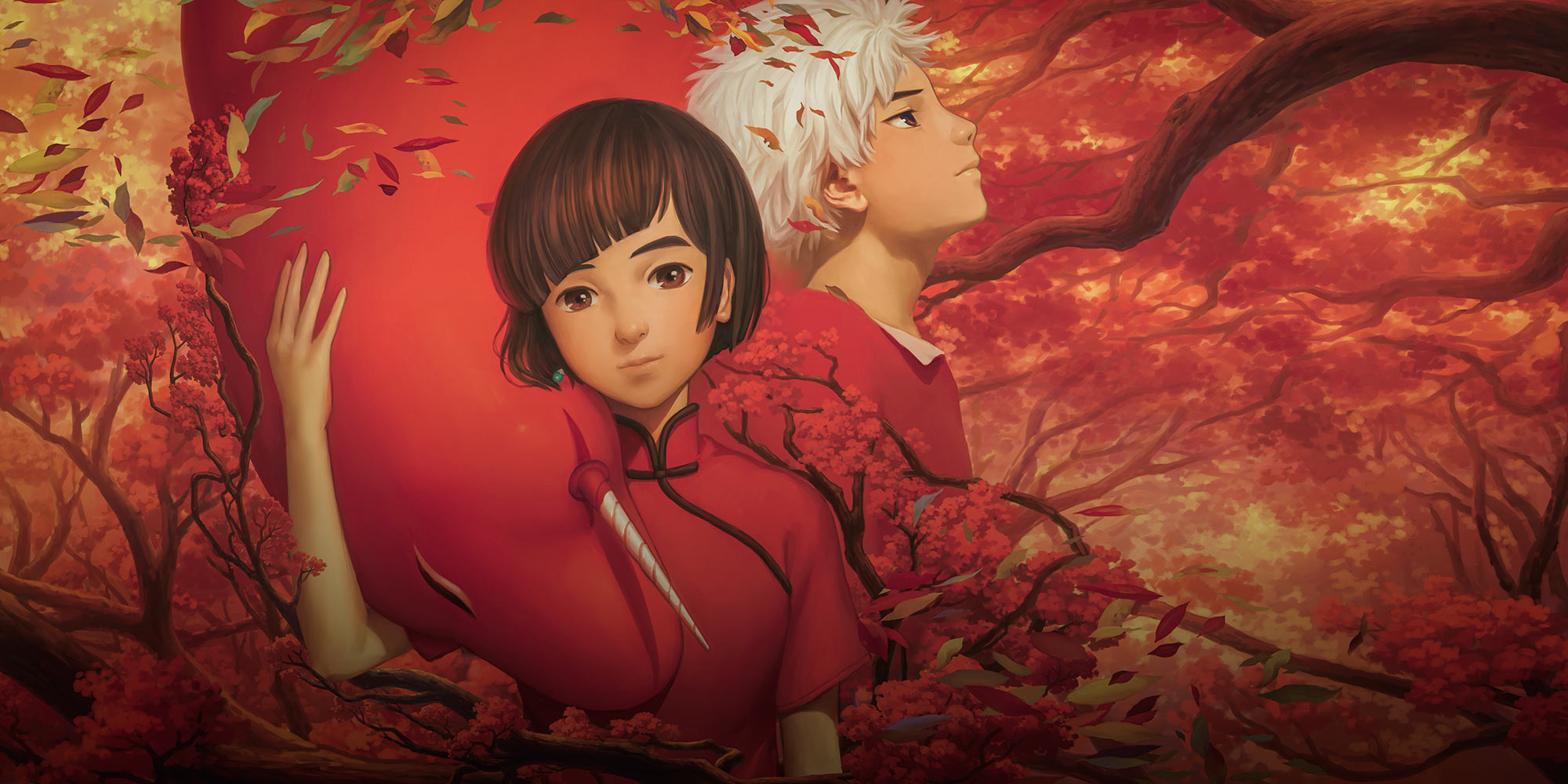 Though we’ve always connected anime with Japanese-based cartoons, there is a realm of Chinese anime that is increasingly coming into the light. If it’s a Japanese corporation that is translating a Chinese web novel or an entirely Chinese cartoon (voices, graphics, sources), China has managed to grab the interest of various anime enthusiasts and with good cause. These are our top eight anime choices from China.

Spirit-beings, neither human nor deity, watch over the world and the natural cycles. To better grasp the consequences of their acts, children must experience a rite of passage. A little girl named Chun is heading to the human world with the other children who are taking the form of red dolphins. When she’s trapped in the net, a young human boy drowns trying to escape. Chun’s need to get the boy back to life at whatever cost triggers a chain reaction that could threaten not just her life but her whole world. Da Yu Hai Tang is a lovely tale about how even the most well-meaning acts will bring pain to some, and what is right is not always apparent. Her immature naivety in trying to rescue others drags a lot of innocent people into a sticky situation. You understand that no good deed is unpunished, and while it is a little saddening, you can not conquer destiny without compromise. It’s brilliantly animated and mystical and worth the tears!

Glory is an MMORPG that has thousands of players desperate to make a name for themselves. Ye Xiu used to be one of the best pros, but he was forced to abandon his guild and give up becoming a professional player. He can’t stop dreaming of Fame, though. He builds a new persona, keeps his name a mystery, and continues to attract the eye of today’s top players. Yet, beginning with new obstacles and limits, it would take more than able to recover what he has lost. One of the most immediate positive points of this Chinese animation is how stunningly gorgeous it is; from sports and nighttime town to fireworks holograms. Magic spells and light effects are enough to attract your interest, but the complex tactics of the players are also fascinating. Stuff like the distribution of skill points and the manipulation of cool-down times will be the difference between success and loss because someone is super strong and professional.

3. Battle Through the Heavens

We’re going to hop back into the realm of CG anime. ‘Doupo Cangqiong’ is translated as ‘Battle Across the Sky.’ The overall runtime of the anime is 4 hours and has been equally spaced across 12 episodes, each episode being 20 minutes in length. Xiao Yan is the star of the anime series. His girlfriend, Gu Wenxin, was killed when he was just nine. His father, Xiao Zhan, never really spoke to his mother about his death. Xiao Yan began learning martial arts to improve his military skills but ended up making little gains at all. The explanation for this was the ring of his mother, which swallowed all his growth. This lasted for six years until he was fifteen years old. Then one day, when Xiao Yan made contact with the ring, he found an old man called Yao Chen. Yao Chen became his master, and soon Xiao Yan began making great strides in his martial arts skills. He also hears about the suspects behind the murder of his mother. Now, he’s all set to revenge.

Haoyi loves a simple high school life free of distractions, even though it means that he has no actual friendship to worry about. That all changes when the famous Zitong interrupts his class one day to reveal that she’s pregnant with HIS child. When it rains, it pours out, as a few other stunning school girls chat about the fantasies of becoming engaged or in a long-term relationship with a reclusive guy. Things only get weirder when the ‘Training Cupid’ admits that because Haoyi unintentionally shared a magic cake he found with some of the ladies, everyone who ate will fall madly in love with him! How does Haoyi move on while someone in school tries to either kiss him or kill him? This Chinese anime by G.CMay Animation & Film has enjoyed a decent success thanks to its harem and goodness. The styles of the girls are all very distinct from one another, from the busty yet delicate Zitong to the torn and roaring Xuan. Although certain harem characters feel a certain degree of envy from the less privileged.

The next entry on the list would be interesting for the zombie genus lovers. Yeah, ‘Shi Xiong’ is an anime zombie. The animation is a little different from the usual anime. It’s more on the comedic side of presenting stuff. ‘Shi Xiong’ takes a satirical approach to the theme of a zombie apocalypse. This approach has been very popular, and there have been some good productions such as ‘Shaun of the Dead’ and ‘Zombieland.’ There’s a lot of anime to take a funny approach to the zombie series. The ‘Shi Xiong’ episodes are very short, with an average length of around eight minutes. The cumulative number of episodes of the series is 41. The storyline revolves around a man named Xiao Fei who is trapped in the middle of a zombie invasion. He is a resident of the H city whose water has been infected with a virus that turns humans into zombies. When the world crumbles and people start eating each other, Xiao Fei wants to leave the city to find Wei, his girlfriend

One day Mo Fan goes to sleep with a mysterious pendant, and the world has changed when he wakes up! Society is motivated not by science, but by sorcery, and magicians are the most elite participants. Despite all that he knows has changed, except for his peers and his family, Mo Fan devotes himself to the study of magic in the hope of improving the social standing of his hard-working father. Things appear to be grim when he finds an attraction not only for one elementary magic but for two, making him the most powerful pupil in all of his classes! Quanshi Fashion has no exquisite art or even half-time smooth animation right off the bat. It’s, though, a funny comedy about a down-to-him-lucky high school kid who’s super-powered while knowing nothing about the world he’s ending up in. Unlike several other shows featuring an all-powerful lead, Mo Fan is attempting to keep his unique talent a secret! Trying to find ways to transfer only enough to make progress without giving away his immense strength.

Tanmoku Ki lived his life as the greatest exorcist who earned him jealousy and anger. When young You Keika dies in a traffic crash in front of him, Tanmoku Ki decides to make You Keika his spirit shadow. This amplifies the powers of Tanmoku Ki and makes You Keika to fight and remain in the realm of the living. Despite being both proud and ornate, they have a far stronger link with each other than mere coincidence. Centered on the manhua network, Ling Qi is an amusing but bitter-sweet story of ghosts, broken promises, and sacrifice. Both lead guys are very fixed in their way, so it’s a wonder that they’ve ever been friends. But Tanmoku Ki and You Keika make a terrific pair until they can stop their bickering. Ling Qi, too, is a BL so fujoshi bonus! But their love feelings play a very small role in the film, and half the time you’d never know they’d be a couple.

‘Zhen Hun Jie’ is a supernatural genre adventure anime that premiered in 2016. It’s an Original Net Animation like any other Chinese anime. The title of the series is ‘Rakshasa Lane.’ It’s based on the Chinese Manhua (comics). If you like badass battle scenes between strong spirits and humans, you’ll love ‘Zhen Hun Jie.’ But if you’re one of those people who like intense drama and a long, evenly spread out anime, you might need to explore some other option on this page. Each episode of the anime is about 14 minutes long and there are a total of 24 episodes in the series. Anime‘s storey revolves around Rakshasa Lane. This street is a spot where people and spirits coexist. But not everybody is permitted to access this location. Xia Ling is the protagonist of this anime who ends up entering Rakshasa Lane. This is going to change her whole life