Sea of Thieves Season 7 is almost here, and if you’re excited to drop sails and raise anchor, you’ll want to learn everything you can about the upcoming season. Sea of Thieves Season 7 is more themed than in previous seasons. This week, the spotlight is on pirate captains, an unofficial title that players may often bestow on themselves or a crewmate—the team leader. However, thanks to several new additions, including the official designation of a captain in your crew, this out-of-game title are gaining some substantial in-game backing with Season 7.

What kind of stuff can we anticipate seeing when it comes out? Will Flameheart seek vengeance? Will the fate of more outposts be decided by the players? And, more crucially, are new cosmetics available? Here’s everything you need to know about the start date of Sea of Thieves Season 7. Walk the plank with us to find out, dear pirate!

Choose your path and conquer the seas!

What to Expect from Sea of Thieves Season 7?

With immersive, long-awaited features, this season will focus on allowing players to role-play as actual commanders of their crew. We’ll break them down piece by piece here.

With Season 7, you’ll be able to save personalized ship loadouts for quick access at any of the game’s outpost Shipwright shops. You’ll be able to keep multiple preset styles so you can dress your ship in the proper colors for each occasion, rather than having to re-select a new hull paint job, sails, cannons, and so on.

Give Your Ship A Name

Finally, the crests over your captain’s quarter will not be left blank. Starting with Season 7, you’ll be allowed to name your ship—as long as it’s an appropriate name, as noted in the witty trailer above. If you don’t have a name yet, now is the time to come up with one. As a tribute to Lost, I’m going with The Black Rock.

Starting with Season 7, your captain’s cabin will be fully customizable for the first time in Sea of Thieves. The trailer above teases some of the brand-new cosmetic options you’ll have access to, such as wall art to hang and shelf trinkets to display. These new options appear to be ideal for pirates who understand that appearance is half the battle. Though it hasn’t been confirmed, the Season 7 Plunder Pass may come with its own captain’s room goodies.

Loot Is Easier To Sell To The Sovereigns

Even the most ardent pirate will admit that selling loot in Sea of Thieves takes longer than it should, particularly when playing in smaller crews or solo. Even a well-oiled assembly line of pirates at an outpost can take several minutes to unload the loot from the treasury room. Season 7 of Sea of Thieves aims to simplify this process by introducing The Sovereigns and a new currency called Cash-In Points.

Though the entire mechanics of this technology are yet unknown, we may assume how it works from the trailer above. Sovereigns will appear as a new merchant at all outposts, allowing you to sell all of your loot items in one location. It appears that you will no longer need to deliver your various treasures to their respective merchants, such as the Gold Hoarders or Order of Souls, though this may be contingent on having enough Cash-In Points to use this streamlined function. 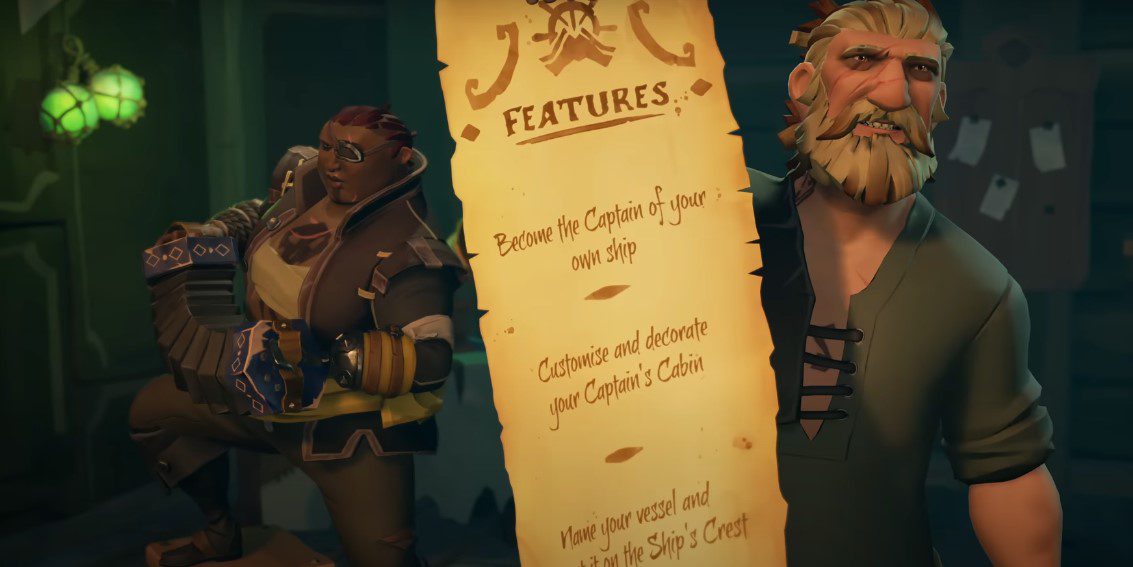 Get ready to become the terror of the seas!

Though the trailer concentrated on a few key aspects, a video snippet reveals several other new features. One of these was the option to “chronicle a captain’s journal,” which implies that the game will now visualize—possibly in the form of a Tall Tales-style book—each journey on which you go in Sea of Thieves. Because the role-playing community in Sea of Thieves is so active, this appears to be a fun vanity project for pirates wishing to make more memories with other swashbucklers.

Select from a variety of playstyles

The ability to pick between multiple playstyles is the final aspect teased in the trailer. For the time being, we can only speculate on what this signifies, but please allow us to do so. This could imply that players will be able to specify preferences for different types of lobbies. Players will be able to tell the game to group them in situations where they are interested in things like PvP, PvE, alliances, or other filters, just as Xbox players can exclude PC cross-play and avoid wicked mouse-and-keyboard players.

Sea of Thieves Season 7 will release on July 21, 2022. Firstly, there’s no current scheduled end time for the season. Usually, each season lasts between ten and thirteen weeks. For the moment, the developers are a little tight-lipped about it. But that’s what we know so far. Thanks for reading our article, happy plundering, and see you soon!