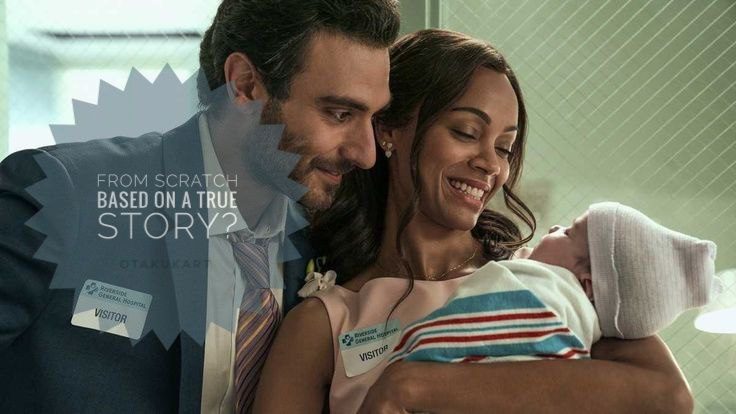 We are getting an inside look at a new Netflix series, “From Scratch.” This American drama limited series is created by American fictional author Attica Locke and actress Tembi Locke, starring Dominican actress Zoe Saldana and Eugenio Mastrandrea. The Netflix series was announced almost two years ago, on November 7, 2019. There is a total of eight episodes in the series From Scratch, which got premiered on Netflix on October 21, 2022, all on the same day.

Besides the main character Amy who Zoe Saldaña portrayed, we also see Lino portrayed by Eugenio Mastrandrea, Maxine, portrayed by the famous television show L.A. Doctors’ actress Judith Scott, and Zora, portrayed by famous American actress and writer Danielle Deadwyler. But is this Netflix Drama series “From Scratch” Based On a True Story? and are the events shown in the series really true? Let’s find out here in this article.

Is From Scratch Based On A True Story?

Yes, this Netflix series is based on a real-life love story and is inspired by a true story of an actor and writer, her name is Tembi Locke, and her late husband and a Sicilian chef named Rosario Saro Gullo. They met and fell in love while Tembi was studying abroad in Italy, and then she moved to the United States to be with him. It is based on her exquisite and singular love tale autobiography with the same name as the Netflix series “From Scratch,” published by Simon & Schuster, which now you know is like CBS is part of Paramount Global. This is the story of their love and loss, they experience some success for a while, but the sudden illness of her husband changes the fate of Tambi.

A Still From Scratch – Netflix

In her autobiography, Tembi writes about their big and beautiful love, the adaptation of her daughter, and the obstacles that they faced, including cancer. They experienced a summer romance in Florence that appears to have been taken straight from a fairy tale. They, however, face numerous life challenges, which test their commitment to one another and their tenacity and perseverance to face all challenges. What starts out as a Sweet Love Story quickly devolves into a horrible one. Now Timbe and her sister Attica have brought their love story to the screen on Netflix, and while the names of the characters have been changed, the challenges they face and their love is real.

Soro Gullo, Tembi Locke’s husband, passed away in 2012 due to his sickness after a protracted battle with cancer, the drug had kept the sickness at bay when he had initially been diagnosed, but it had also stopped him from pursuing a respectable career. For eleven years, Soro was cared for by Tembi, and despite their challenges, they fulfilled their lifelong dreams. From Tembi’s story, we learned that life is still happening around us. Tembi said in her autobiography that they always wanted to be parents. Soro’s parents reconciled with him after learning that he was sick.

A Still From Scratch – Netflix

Over the years, Tembi attempted to improve her relationship with her in-laws., particularly with her mother-in-law Crochet Ortolano. As her way to cope with her loss, Tembi started writing about their love story and all their challenges and eventually turned it into a Memoir. Tembi shares the story of love, sorrow, and grief with anyone who might be going through a similar situation in their life. Tembi remembers sorrow via food, which is her late husband’s greatest pleasure. Soro, according to her, is smiling back at us today.

Tembi was hesitant to allow her heart to be awakened to the notion of new love when she first met Robert in 2016. She realized that Robert was the best person for her to start over with, though. They got married in July 2020.

Due to Covid-19, it was a tiny ceremony attended only by newlyweds, and Tembi’s daughter Zoella and Tembi’s father presided over the wedding while Zoom brought the rest of the family. Tembi has talked about how, although grieving over her first spouse, she was still able to find the time and help she needed to pursue a relationship with Robert. He read Tembi’s autobiography “From Scratch” to understand Zoella’s relationship with Soro and took his time getting to know her.