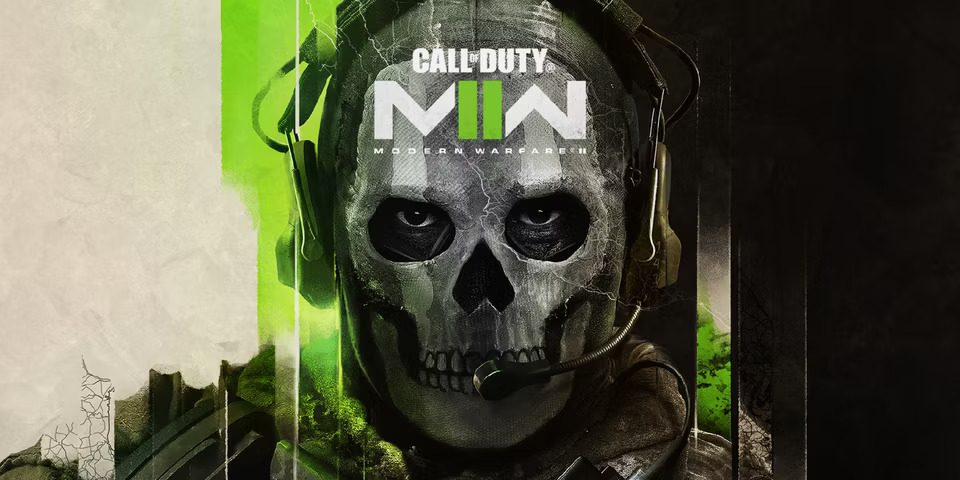 Later this year, Modern Warfare 2 is set to release, and in the previous few months, we’ve gotten a ton of info about it that has us really excited for it. We are aware that Modern Warfare 2 picks up just after the 2019 Modern Warfare remake and will feature several of the franchise’s most beloved characters, like Ghost, Price, Gaz, and Soap. Additionally, we know that Infinity Ward is working on Modern Warfare 2 and Warzone 2.0 at the same time and that all future Call of Duty games will debut on the same engine.

Modern Warfare 2 premiered its spectacular gameplay teaser last month, featuring new settings, characters, and the announcement of an open beta with early access for all those who pre-order. The MW2 Beta Release Date appears to have been accidentally released by Amazon, though we’re not sure whether to believe it or not.

As the game moves closer to release, Infinity Ward has released a ton of new information and previews for the impending sequel to the Modern Warfare reboot. In typical Call of Duty style, Modern Warfare 2 will provide pre-order incentives, and a special package called the Vault Edition, which includes four Red Team 141 operatives and the season 1 Battle Pass. Fans who pre-order the regular edition or the Vault Edition will get early access to the open beta, which might happen quite soon.

The release date for Modern Warfare 2 is October 28, 2022. Despite the fact that Black Ops Cold War and Vanguard were released in the middle of November, it appears that Activision is taking advantage of a smaller autumn release window to release Modern Warfare 2 a little earlier than planned.

Due to the disappointing sales of Call of Duty: Vanguard, there were rumors that Call of Duty 2022 will debut earlier than usual. Vanguard “didn’t fulfill expectations,” according to Activision, because gamers dislike World War 2. Maybe the setting of Modern Warfare 2 in contemporary Latin America will give the franchise new life as it enters its 19th year. 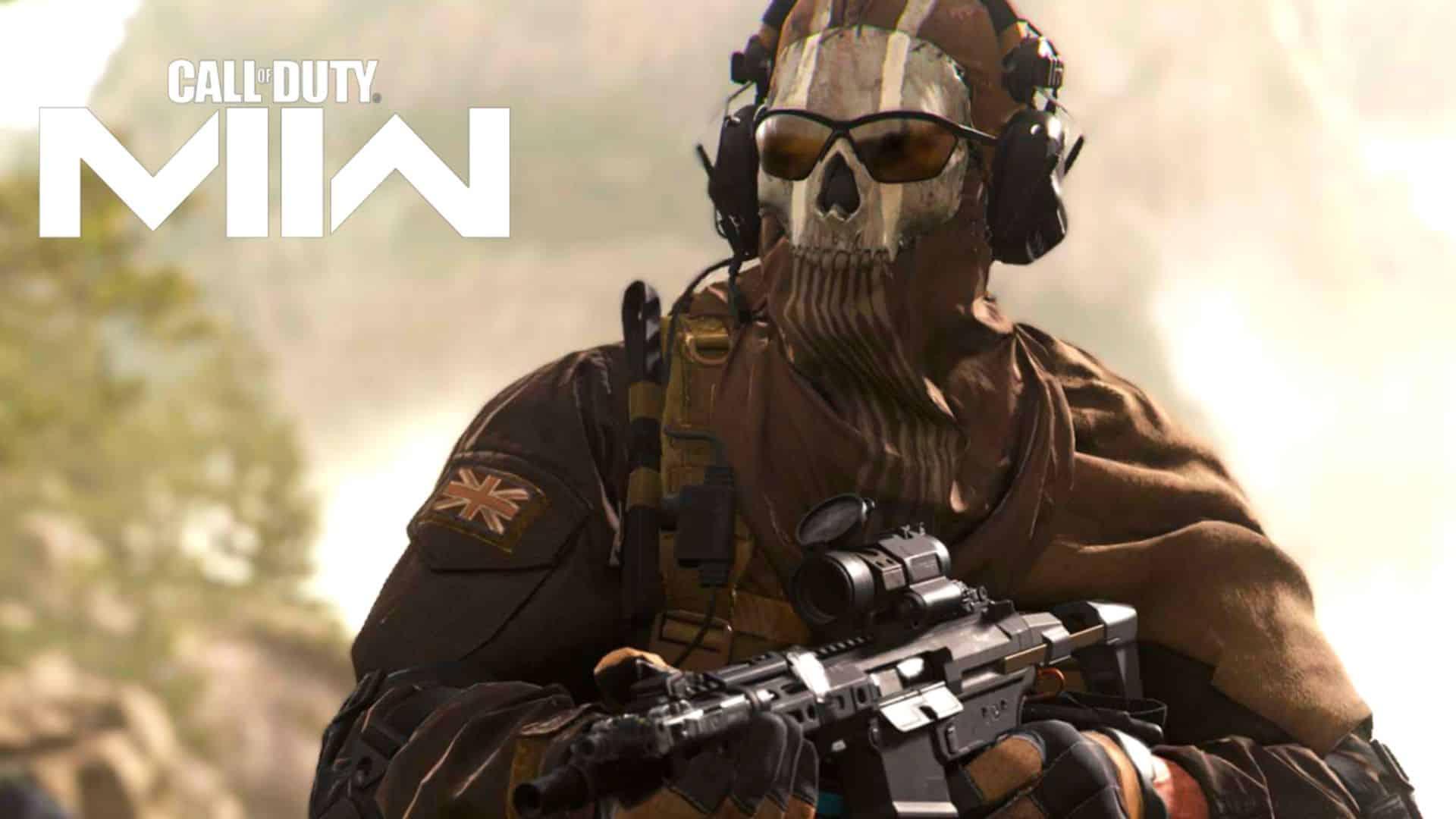 Will Xbox One and PlayStation 4 have Modern Warfare 2? It’s a good question, and Activision hasn’t responded to it. In the past, the publisher accepted outdated hardware for a while before restricting Call of Duty to next-generation systems. For instance, when the PS3 and Xbox 360 were released in 2013, gamers could play Advanced Warfare (2014), Ghosts (2013), and Black Ops 3 (2015) until Infinite Warfare (2016) became a PS4 and Xbox One generation-only title.

That history doesn’t necessarily imply that Modern Warfare 2 won’t be restricted to PS5, PC, and Xbox Series X, given the scope and expense of modern video game production. However, a new leak of the pre-order bundles suggests that a “cross-gen version” will be included in the Modern Warfare 2 Editions. It is likely that MW2 will be available on PS4 and Xbox One in addition to PS5, PC, and Xbox Series X.

As per an Amazon US official list, fans who pre-order Modern Warfare 2 for any console before August 15 will start receiving early access to the Open Beta, with the codes getting sent out on August 15 precisely. All of this indicates that the beta will begin for people who pre-order on August 15 if Amazon’s listing is genuine. The beta code statement that Amazon had placed next to each Modern Warfare 2 listing has now been removed, but screenshots of the leak are still available online. 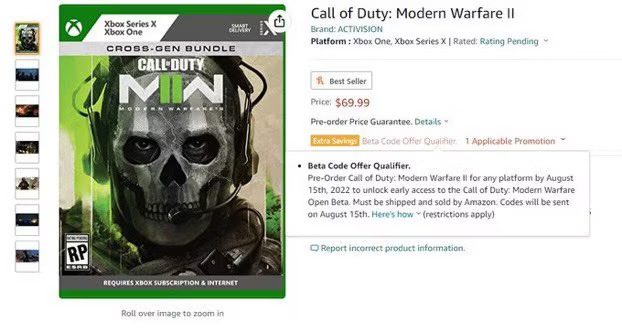 No official Modern Warfare 2 beta release date has been announced by Infinity Ward or Activision, with the only information provided being that PlayStation will receive the test “at least five days” ahead of Xbox One and PC. In the past, Call of Duty has given PlayStation early access to its testing grounds, but it has also introduced these grounds considerably closer to the release of the entire game.

This may be the final year when the Call of Duty series favors Sony’s hardware in terms of beta testing and console exclusivity. The acquisition of Activision by Microsoft and the associated IPs is still ongoing, but if the deal is finalized, it might put an end to PlayStation users’ access to Call of Duty before anybody else. Only time will tell how Microsoft and Call of Duty evolve together. It’s still possible that Xbox Game Pass customers will be chosen as the preferred beta testers for next Call of Duty titles. 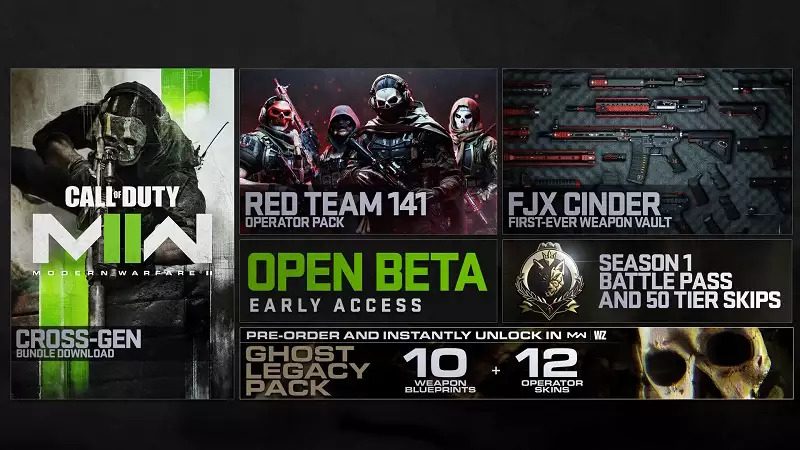 How To Get The Modern Warfare 2 Open Beta?

According to the most recent teasers, those who pre-order on PS5 and PS4 will get first access to the Modern Warfare 2 beta, obtaining it “at least 5 days earlier than in any other platform.” This will be the beta’s PlayStation early access period. The next stage will be Xbox + Battle.net PC early access and the PlayStation Open Beta stage. After a few days, this will probably change into the open beta phase, which is free for all consoles and removes restrictions so that anybody may play the game regardless of console or pre-order status.

In conclusion, preorder Modern Warfare 2 on the PS5 or PS4 to get access to the Open Beta as soon as possible. If not, you may still preorder it on PC or Xbox to get early access just a few days before the Open Beta actually starts to be an “Open Beta.”

You will instantly qualify for beta access if you place a pre-order through the Xbox Store, PlayStation Store, Steam, or battle.net. You’ll need to keep an eye out for a beta access code if you purchase somewhere else. You can find this 13-digit number on your receipt or in the email confirmation. The next step is to redeem your code at callofduty.com/betaredeem. Once again, unless you make a purchase from a store not on the above list, you won’t often require a code. 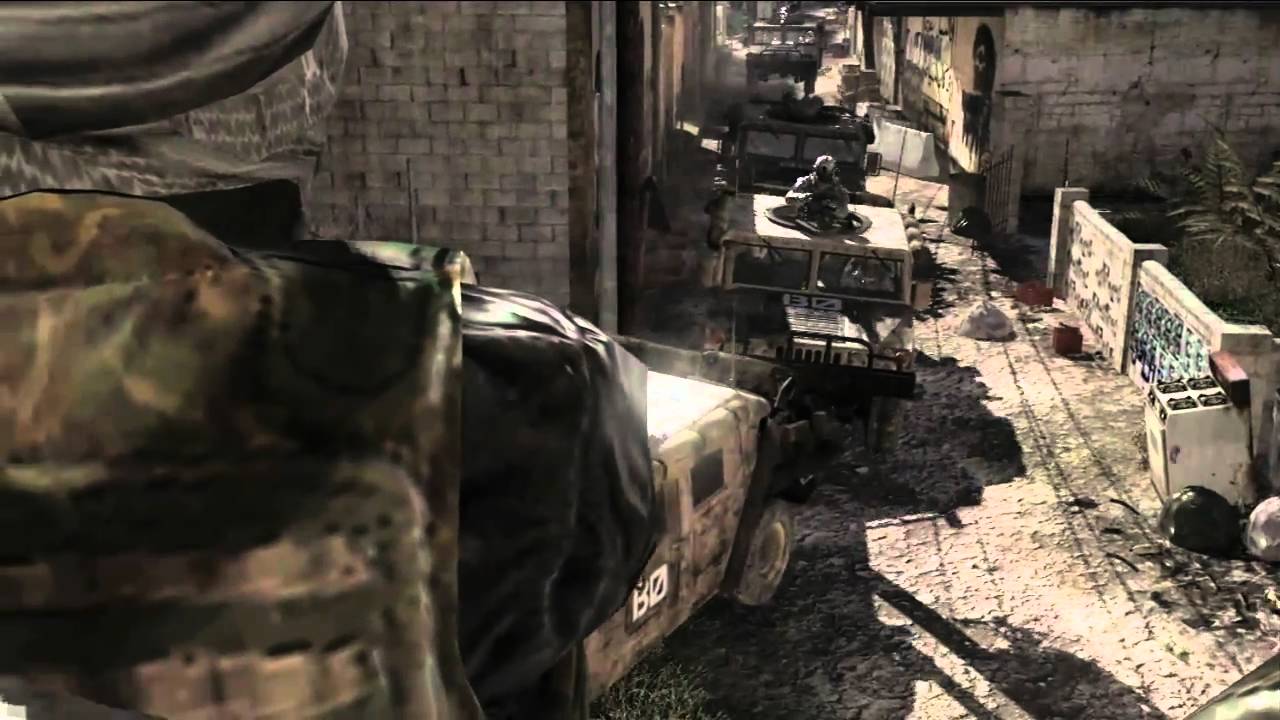 The 2019 Modern Warfare direct sequel, Modern Warfare 2, takes place 3 years after the conclusion of the first game. If you recall – and for those of you who don’t, here’s a spoiler – the game ends with Captain Price meeting with CIA handler Kate Laswell to talk about the threat posed by Victor Zakhaev, a developing problem with General Shepherd, and the creation of Task Force 141. Warzone technically continued the Modern Warfare storyline by reintroducing Ghost and even bringing several important characters back from death, and that is all there is to it.

Task Force 141 is created as the go-to group for the most difficult tasks when Modern Warfare 2 begins. However, it appears that the new version of Modern Warfare will be a little less controversial than the previous one. They continue to get their hands filthy so that humanity can remain clean. Traveling adventures, crazy missions, and lots of shouting are to be expected.

Despite claiming to be a “global gameplay reveal trailer,” the first MW2 trailer mainly consists of cutscenes. However, during a preview, we got to witness a little more gameplay, and we wouldn’t be surprised if we got to see more in the weeks leading up to E3. According to what we’ve seen so far, the gameplay includes a crazy skyscraper-rappelling mission, a night vision mission involving a downed Apache chopper, and the aforementioned water-based mission that will take full advantage of Modern Warfare 2’s remarkable graphical quality and new water mechanics. 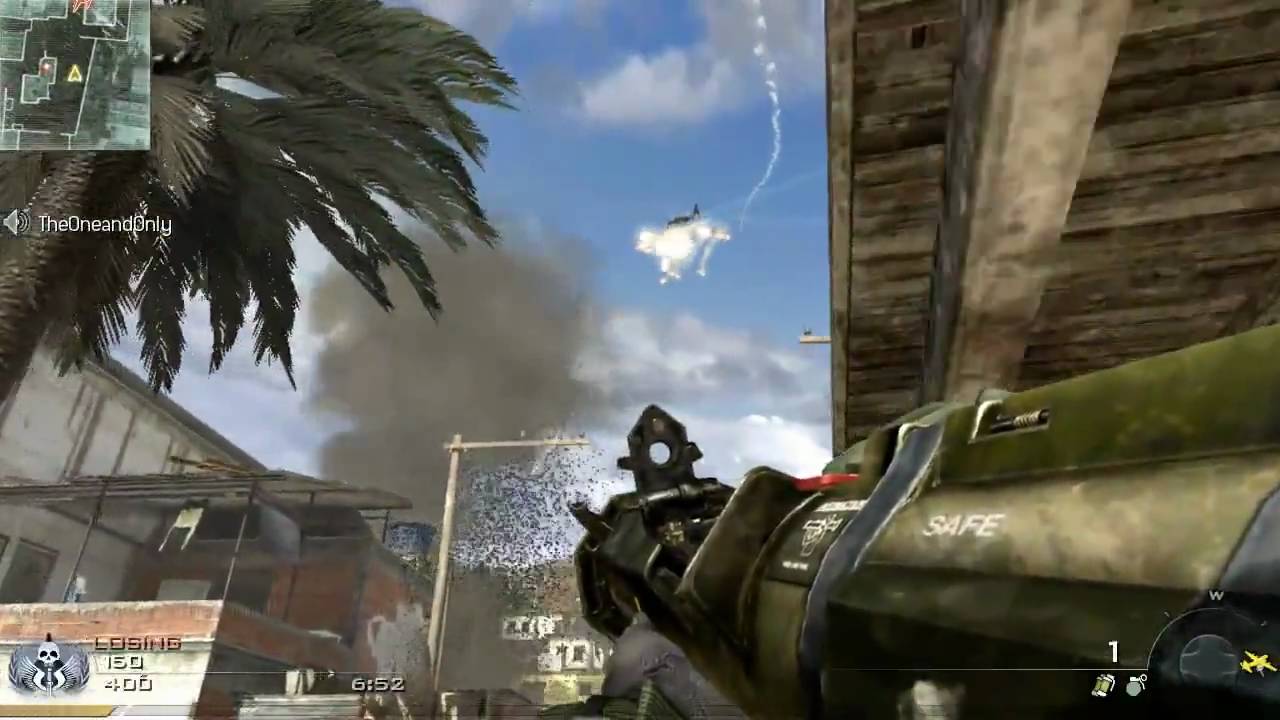 It should go without saying that the gameplay reveals of Modern Warfare 2 is one of the most anticipated events of 2022 because Activision has promised that it will be “the most high tech experience in franchise history” and that it is powered by a brand-new version of Infinity Ward’s breathtaking IW Engine.

According to reports, the ‘DMZ’ game mode in Modern Warfare 2 would be modeled after the Escape from Tarkov game mode. According to insiders, Modern Warfare 2 DMZ has always been in development since 2018 and will have players navigating wider maps to gather loot, avoid enemy teams, and successfully exit the map with their goods. We’re interested to see how Call of Duty will approach this genre of the game, given the rising success of titles like Tarkov and Hunt: Showdown.