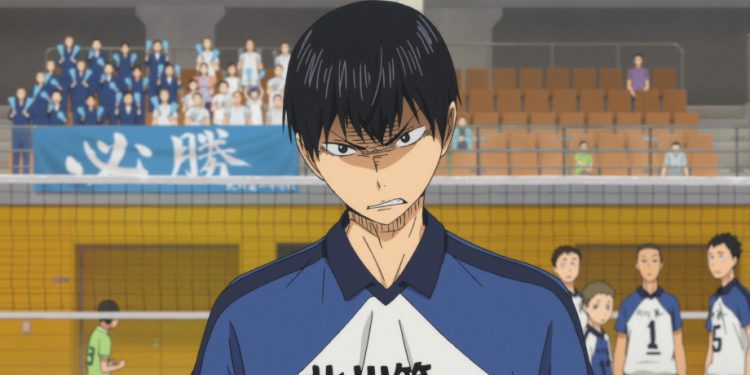 Haikyuu!! is quickly turning into one of the most loved sports anime to ever exist. This series is based primarily in a high-school setting. The show reminds several fans of legendary sports series like Slam Dunk. The show’s premise follows a keen-eyed teenager called Hinata Shoyo. Hinata is built small compared to other volleyball aspirants. But he does not let his height set back his dreams. The main reason for this is that he is inspired by a player nicknamed “Little Giant” of Karasuno Highschool. He soon goes on to make acquaintances with people like Kageyama Tobio and further joins the Karasuno Highschool to accomplish his dreams. Here, we see some iconic moments as Hinata and Kageyama, together become the ‘Deviant Duo.’

Kageyama Tobio is one of the most badass characters of Haikyuu. He is initially considered to be a very scary and mean person. Kageyama, during the start of the show, had no regard for his teammates. He was nicknamed the “King of the Court”. After he joins Karasuno Highschool, he gets determined to work on his shortcomings and improve himself. Kageyama recognizes Hinata’s inner talent before anyone else and goes on to form a terrifying partnership with him. Both of the characters consider each other as their rivals but also learn to rely on each other. We are about to discuss some of the coolest Kageyama moments down below.

1. Kageyama’s Advice To Hinata After The First Match

This interaction between the two characters sets the tone for the show. This occurs after Hinata’s middle-school team loses terribly to Kageyama’s team in volleyball. Kageyama does not take pity on Hinata and tells him that you need to stay in the court to fight. We can’t forget this moment as this establishes the character both as being extremely arrogant and cool. He confidently says, “Only the winner stays in the court…the first game, second game, the playoffs, the nationals…I’m going to win them all!”.

Also Read: Strongest characters of Haikyuu!! from Anime and Manga

2. Motivates Asahi to Not Give-Up

Tobio is not famous for being the best team player in the game. But towards the end of the first season, we see him actively make a huge change in himself. He gradually understands that to play volleyball, you have to work as a team. When Asahi, the ace of Karasuno, keeps blaming himself for losing a game, Tobio motivates him to not be harsh on himself. This scene has garnered one of the most popular quotes from the series, “You don’t win alone. That’s just how it is.”

This dialogue by Tobio Kageyama for Hinata is one of the most memorable scenes of the show. When Hinata feels very demotivated about his skills during season 1, Tobio motivates him not to lose hope. But being classic Tobio, he mainly compliments himself while trying to encourage his partner. This scene sends chills down the viewer’s spine. As we establish here how deep the two character’s relationship is with each other. This scene is so iconic that in later seasons, Hinata himself repeats the same dialogue to reassure Tobio.

If Tobio is considered as “The King of the Court,” Oikawa is called the “Great King” by Hinata. Oikawa used to be Tobio’s senior in middle school. Both of them are excellent setters, but Oikawa doesn’t acknowledge Tobio as his equal. Karasuno loses an important match against Aoba Johsai at the end of season one. This incident increases Karasuno’s will to win. Tobio puts in his best efforts during the match, but this dump shot is an unforgettable moment. Oikawa gets devasted during this scene and is forced to admit Tobio as his equal.

Other players often make fun of Hinata’s blocking skills in volleyball. And Tobio joins this party as well. He always comes off as a more serious person than Hinata. But in reality, Tobio is as passionate about volleyball as his partner. We get to see a lot of goofy aspects about Tobio. Some of them include him always doing petty competitions with his rivals and being absurdly bad in maths. But the one that probably stands out the most is his face block. During the match against Jozenji, Tobio uses his face instead of other body parts to block the incoming ball. This scene is one of the funnier yet iconic moments of Kageyama.

We tend to forget at times what a great player Tobio is due to Hinata. Since Hinata is the protagonist of the show, our attention mainly goes towards him. But the writers of the show remind us just how amazing Tobio is with this scene. This training camp is meant for the most talented players in Japan. Tobio is selected as one of the best players in the country. While some of his teammates cheered for him, others felt left out. Hinata was one of those people who were feeling this way. And Tobio as well took this opportunity to rub this off in his rival’s face. This is one of the most iconic moments of Kageyama.

Also Read: Kageyama Vs Hinata: Who Will Emerge Victorious? – Haikyuu!!

We all know Tobio Kageyama and Hinata Shouyo have an iconic partnership in the series. One of the main reasons for their popularity is the famous “freak attack”. In this attack, Hinata jumps as high as possible, and Kageyama sets the ball directly in Hinata’s hands. This attack happens in such a quick and unpredictable way that it is also called their “quick attack”. This was a pair that was meant to be as Kageyama is someone wanting to play quickly while Hinata is eager and athletic to go for every set. Seeing the two, we were always left in awe, but the one against Dateko feels like a true breakthrough for the pair.

8. You Can Fly Even Higher

This scene shows one of the softer sides of Tobio. Hinata’s biggest strength is his high jumps. But his confidence falters after Kageyama tells him about Korai Hoshumi, who seemingly jumps higher than him. And Tobio notices this uncertainty in his peer. He puts Hinata at ease by saying this dialogue. With the heightened animation quality and music, this is one of the Kageyama and Hinata moments that become memorable.

Before this match, both Kageyama and Hinata visit Shiratorizawa. But both of them are humiliated by Ushijima, the top volleyball player of the prefecture. Regardless, both Hinata and Kageyama get to introduce themselves to Ushijima Wakatoshi as Hinata claims that Karasuno would beat Shiratorizawa and go to the Nationals. The best part about this was Hinata saying that they are from the concrete while Kageyama grins at the scenario. As time passes by, and Karasuno move to the Prefectural Finals, they were set to play against Shiratorizawa. This match holds a very special space in our hearts, as it seemed almost impossible that Karasuno would win this game. Kageyama shows amazing character development in this arc of the series.

During the second season of the anime, Kageyama and Hinata develop a very close relationship. As it’s popularly said, all relationships have their ups and downs. This relationship also takes a hit when they realize that their quick attacks may always not work. Hinata is adamant about continuing the attack while Kageyama is not. The pair learns to become more tolerant in later episodes. This arc shows a very emotionally heavy side of Kageyama.

These iconic scenes are ranked in no particular order. But the audience is sure not to forget these scenes anytime soon. One of the major reasons for the massive success of Haikyuu is Kageyama. While the character may seem scary sometimes, his constant will to chase after his dreams make him endearing to watch. We wish Kageyama keeps getting such badass moments to outshine.

Also Read: 5 Facts about Kageyama Tobio from Haikyuu Anime and Manga That You Need to Know