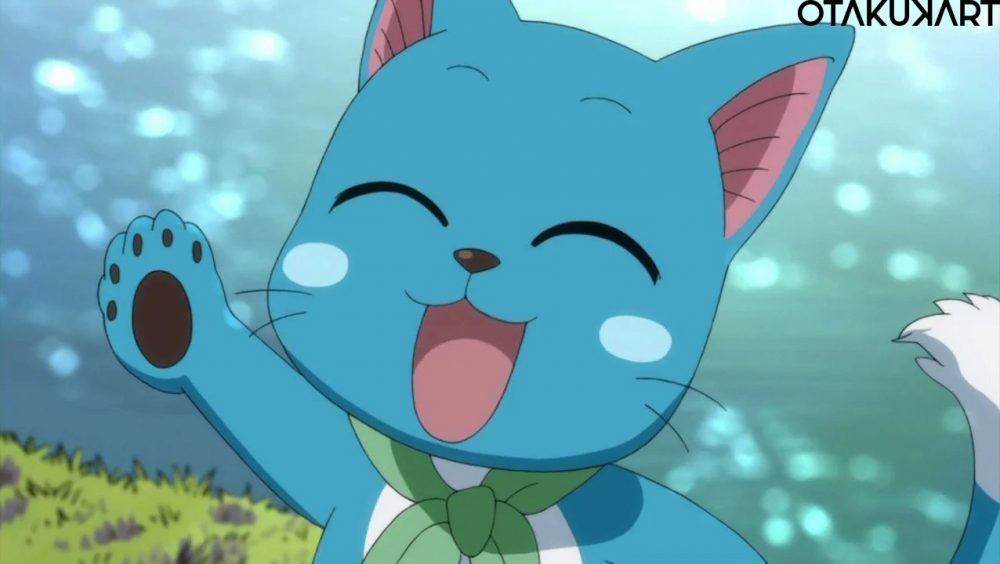 In the anime world, the slice of life or happy anime genre is huge. The genre has produced a lot of unique series over the years, easily identifiable by its depiction of ordinary people’s daily lives. Because of the genre’s popularity, it’s not uncommon to see it combined with other aspects like fantasy, science fiction, or drama.

However, while there is a certain allure to seeing romance, adversity, and triumph through the eyes of ordinary people, not everyone is fond of heavy stories after a long day. Lighthearted shows that don’t always follow a plot would be an ideal treatment for a tired soul. The slice of life genre is also a gold mine for relaxing shows, but narrowing down the best ones from such a large pool can be difficult.

Ryuuichi and Kotaro are brothers who died in a plane crash with their parents. Youko Morinomiya, the stern director of an exceptional academy, agreed to take them in when they were left alone in the world. Ryuuichi must, however, join the babysitters’ club in exchange.

This club was established by the school to care for the children of the instructors. However, as is well known, caring for toddlers is not something that everyone wants to do, and hence the club lacks members.

Ryuuichi now has to look after not only his younger brother but also five other youngsters. In this club, what kind of problem does Ryuuichi face? A still from ‘School Babysitters’

This anime follows the shenanigans of a girls’ music club on a regular basis at school. They pretend to be a music club, but they spend more time drinking tea, eating cakes, and engaging in strange activities in order to advertise it. K-On is a slice-of-life anime rather than a music anime. Yui plays the guitar, Mio plays the bass, Mugi plays the keyboard, and Ritsu plays the drums.

Later, a fifth person joins the group. Each girl embodies one of the cast’s core tropes of “cute girls doing charming things.” Yui, for example, is a clumsy airhead, to use a cliché. Another girl is quiet and self-conscious yet popular among the lads. It’s also cliched. The instructor is much more of a kid than any of her students. 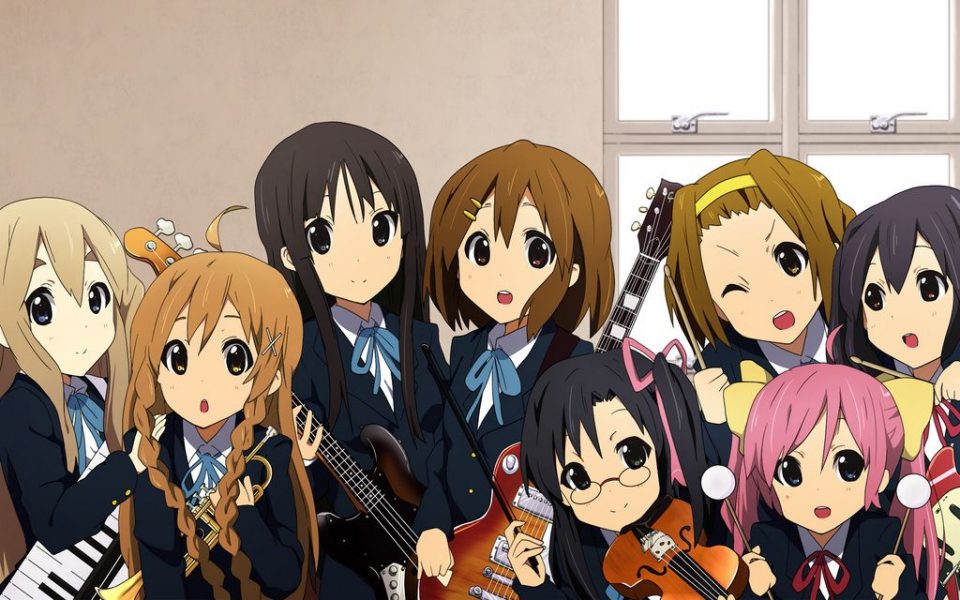 Satsuki and Mei, two little girls, live in an ancient house with their father, Tatsuo Kusakabe, in 1958 Japan, while their sick mother is in the hospital. The girls meet a mysterious creature named Totoro, a cute and furry susuwatari that acts as their guardian angel, watching over them and assisting them in times of need. My Neighbor Totoro, often regarded as Miyazaki’s breakout film, has acquired a cult following throughout the world since its premiere. Totoro, who is now a global phenomenon, has long served as the Studio Ghibli mascot. A still from ‘My Neighbor Totaro’

This happy anime film is set in a universe that is both “contemporary and nostalgic.” The film creates a convincing world in which humans and supernatural beings cohabit together. The intriguing backgrounds, as well as the general vibrance and colors, provide spectators with a rich and opulent cinematic experience.

Miyazaki created Totoro, a fictional spirit, by hand, drawing inspiration from the Shinto religion by infusing the kami (holy forces) into Totoro’s vigilant eyes. It serves as a guardian angel to the sisters. Instead of trying to decipher the logic in this picture, which is a smart blend of terrifying, sentimental, and touching, one should let their imagination run wild with this once-in-a-lifetime trip.

You can watch ‘My Neighbor Totaro’ Here.

Three close pals roam the hallways of the all-boys Sanada North High School: Hidenori, the quirky ringleader with a hyperactive imagination, Yoshitake, the passionate, and Tadakuni, the reasonable and prudent. Giant robots, real love, and great drama abound in their lives… at least in their vivid imaginations.

In actuality, they’re just a regular trio of men trying to kill time, but who said ordinary life couldn’t be interesting? Danshi Koukousei no Nichijou is full of weird yet wonderfully realistic situations that are anything but routine, whether it’s a complex RPG reenactment or an unexpected romantic rendezvous on the riverside at twilight. 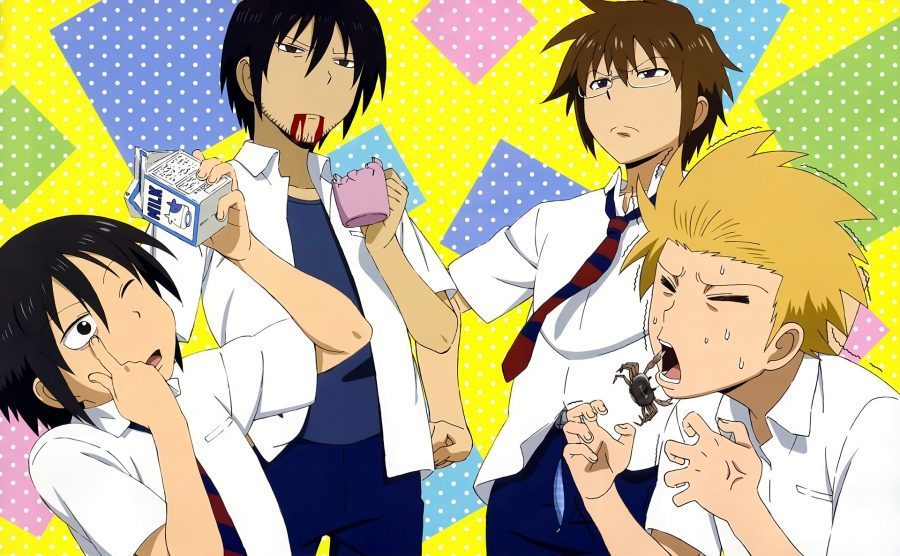 This happy anime follows Saiki, a young kid who was born with a wide range of psychic abilities. You might think that life would be surreal for someone with such power, but Saiki, a pessimist who is bored with his power in many respects, might argue that it isn’t so bad.

Saiki misses out on mundane hobbies and things that an ordinary person would find, well, ordinary, and many of the activities he finds are disrupted by his powers and become taxing experiences for him. Though he wishes he could participate in so many of these basic activities, in the end, Saiki is so accustomed to his abilities that life would be impossible for him without them. A still from the anime ‘The Disastrous Life of Saiki K’

You can watch ‘The Disastrous Life of Saiki K’ Here.

Suzuki Iruma, a 14-year-old human, is carried against his will into the domain of demons one day. To make matters worse, his adoring owner and self-proclaimed “Grandpa” is the new school’s chair demon.

Iruma must contend with a snobbish student who challenges him to a duel, a female with adjustment issues, and a slew of other terrifying creatures in order to survive. Will this ultimate pacifist be able to avoid the slings and arrows aimed at him? Iruma’s intrinsic generosity begins to win over opponents as he battles desperately. 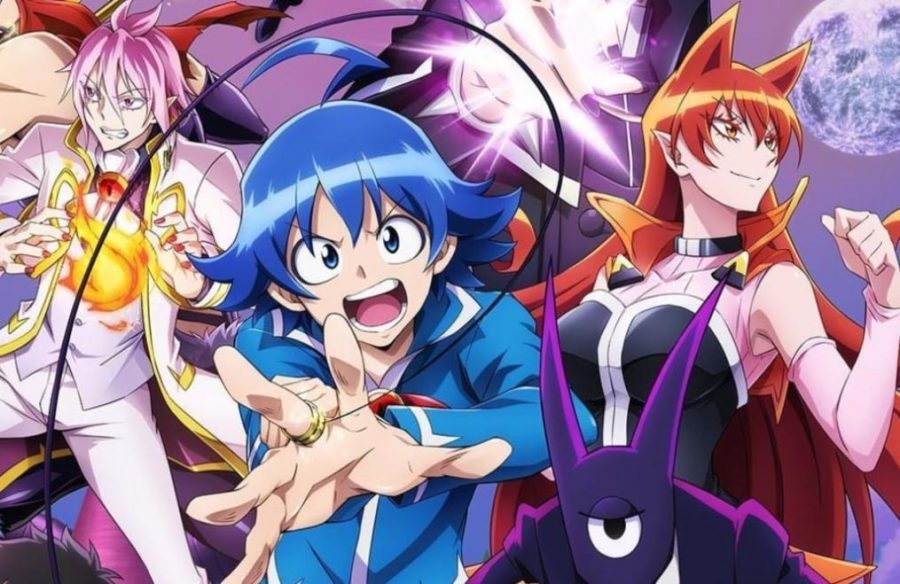 When Hinata was in elementary school, he saw the “little giant” who played volleyball and decided to join them. In his first and only event as a middle school student, he is defeated by his nemesis Tobio Kageyama. As a result, Hinata joins the volleyball team at Kurasuno High School, vowing vengeance on Kageyama.

Kageyama, on the other hand, is a member of Kurasuno’s team. With Hinata’s mobility and Kageyama’s exquisite ball-handling, the erstwhile adversaries become a renowned combination. They compete in local competitions together, vowing to face Kurasuno’s fated rival school at the nationals. You can watch ‘Haikyuu!!’ Here.

Kazuma Sato is a hikikomori (shut-in) game, anime, and manga fanatic. A car accident should have ended his regrettably brief life, yet he wakes up to find a gorgeous girl who introduces herself as a deity. She invites him to travel to another world, but he may only carry one item with him.

Kazuma decides to bring the goddess with her. With that, he is taken to another realm, where he will begin his grand adventure of subjugating the demon king. But first, he must acquire food, clothing, and shelter. Kazuma wants to live in peace, but the goddess keeps throwing obstacles in his way, and the demon king’s army is on his tail. Official art for the anime ‘Konosuba’

The show follows Haruhi, a young woman who is accepted into a famous high school known as the “rich and beautiful” school. On one of her first days, she meets a bunch of attractive boys who call themselves the Host Club. She then gets herself into some mischief and joins the men in their everyday pranks. Haruhi and the Host Club never have a dull moment, whether they’re touring a tropical paradise or meeting the Lobelia Girls’ academy. 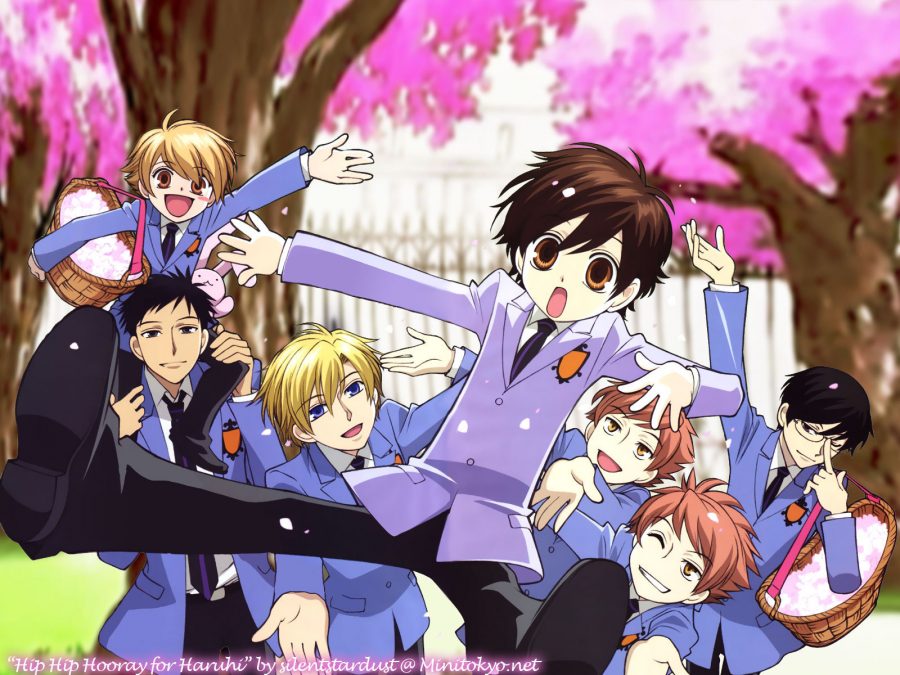 Throughout this happy anime, you may watch her interactions with each of the boys and learn about the different types of boys. Their king, also known as Host Club President Tamaki, defines each boy’s personality in the first episode, explaining why they are in the Host Club. They are based on popular clichés like the boy-lolita, dark and mysterious, and princely. As a result, practically any lady can find a man she likes.

Lucy, a fugitive celestial mage, has been cursed by a magical charm. A Dragon Slayer named Natsu Dragneel and his sidekick, Happy, swoop in to save her from being sold on the black market. As Lucy will soon discover when she joins Fairy Tail, causing significant property destruction is a specialty of the magical guild. Lucy soon meets Gray and Erza, two more Fairy Tail wizards. Gray is an ice wizard with a cool personality and a unique “passion,” while Erza, on the other hand, is a re-equip magician, allowing her to change her armor and weapons at any time. Fairy Tail remains united despite a variety of arcs and is one of the best out of all happy anime one can watch.

You can watch ‘Fairy Tail’ Here.