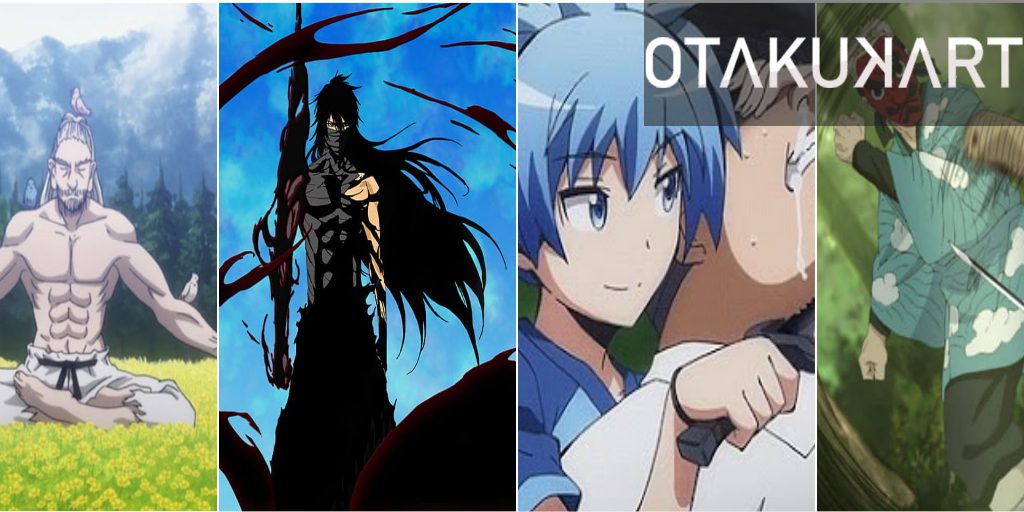 What comes to your mind when our favorite characters say that they need to get stronger? You are thinking right. It is training time! We all train for something in real life, but we seem to not notice the outcome. But in the anime world, you can see the results of the hard work and training in such a way that blows your mind.

We have seen our favorite characters turn mountains into dust, fire into ice. We have seen them turn years of training into a moment of destruction. What we remember is the end battle, but seem to forget about the training. We would never have gotten the legendary fights if our favorite characters would not have gone through their harsh training. These training arcs are the calm before the storm. But, once the training ends, we all get the storm that blows our minds.

To know what fueled our favorite characters to go through their rigorous training and how things went down after they finished their training, here is the list of the 10 best training arcs in anime that will set your heart ablaze.

We have to agree that old people in anime are quite something. They seem like regular old people but they are not. Isaac Netero is that old guy who you should never mess with. We all remember what happened in the chimera ant arc. Before chimera ant arc, we saw him as the 12th chairman of the hunter association. We did assume he would be powerful as he was the chairman of the hunter association but never imagined he would be that overpowered.

When Netero was already 46 years old, he was rejected by the headmaster of the dojo we went to train in. So, he trained himself for more than 4 years. He practiced one single punch 10,000 times each day. It was his daily training of 10,000 punches of gratitude. He perfected that punch so well that it is said that his punches are faster than the speed of sound. And when throws a punch, it looks like it is coming from another dimension. When he showed the results of his training to the headmaster, he got on his knees and begged Netero to teach him what Netero taught himself.

We all saw how it went down with Meruem in the chimera ant arc. We all saw the results of his training that day. From zero hand technique to 100-type Guanyin bodhisattva, every technique blew up our minds. He was the example of “Never underestimate an Old Guy”.

When you lose one of your close ones, that’s when your training gets even more serious. The fear of losing your close ones again makes you go the extra mile. When Naruto lost his Godfather, Jiraiya, he went to Mount Myoboku for his sage mode training.

In the beginning, we all must have thought about what difference would this training make. Jiraiya himself had the same training yet he could not bring Pain down. But, Jiraiya was a Hokage Maker. We should have known that Naruto has the potential to surpass Jiraiya one day or another. What he learned there at Myoboku, helped him develop his forbidden jutsu, Futon Rasen-Shuriken.

When Pain arrived at the Hidden Leaf Village, all hopes were lost. But after his training, when Naruto made his entrance, God knows we all screamed like hell. We just knew what was going to happen before it even started. The battle of the Pain arc was the fruit of his training at Myoboku. 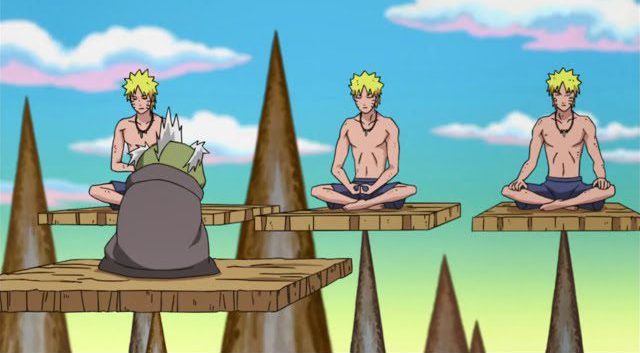 It aches our hearts to even recall what happened in the Marineford Arc. Just when we started to think that Ace was rescued, it all broke down to pieces. We did not want to believe what happened there as much as Luffy. But, that loss is what made Luffy realize he still has a long way from becoming the pirate king. That loss broke him completely. Even his nakamas were unable to be there for him.

They all had a plan to meet in 3 days after rescuing Ace. But the loss of his brother made him realize that the entire crew needed to train more before they can set their foot further toward their dreams. That’s what 3D2Y meant. Instead of 3 days, they’ll meet after 2 years. And this 2 year time skip changed the entire Straw Hats completely. Luffy learned to control his conqueror’s haki and added new gear techniques to his arsenal.

Zoro, who never bowed his head down in front of anyone, begged Dracule Mihawk to teach him to get better. You know it is serious when Zorro begs the one whom he pledged to defeat someday to teach him. The entire Straw Hats were different after these 2 years. Each one of them is a “one-man army” now. 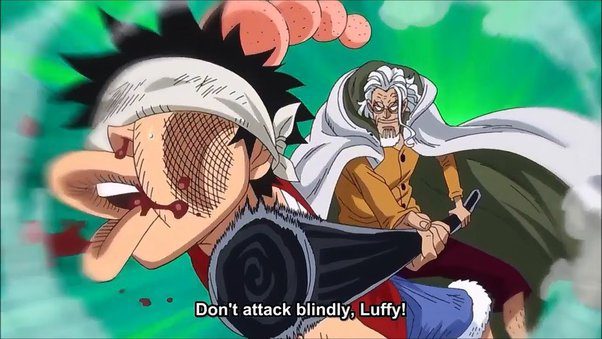 After losing everyone in his family, Tanjiro desperately tries to protect his only sister left, Nezuko, who was turned into a demon. We can only imagine how hard it must have been for him to hold himself together after losing everyone.

On Giyu Tomioka’s recommendation, after he somehow manages to protect Nezuko from Giyu, he goes to Saigiri Mountain. There he was supposed to find Sakonji Urokodaki but Urokodaki found him first instead. There he trained for 2 years under Urokodaki. After Urokodaki had nothing more to teach, he left Tanjiro to hone his skills until he could slice the big boulder in two. This task looked next to impossible.

But with the help of former students of Urokodaki and friends of Giyu, Sabito, and Makomo, Tanjiro was able to cut the boulder in half. But later he came to know that Sabito and Makomo were spirits from the past. They both died in the Final selection for the Demon Slayer Corp. All the training the two spirits helped him with helping him to avenge their deaths in the final selection. 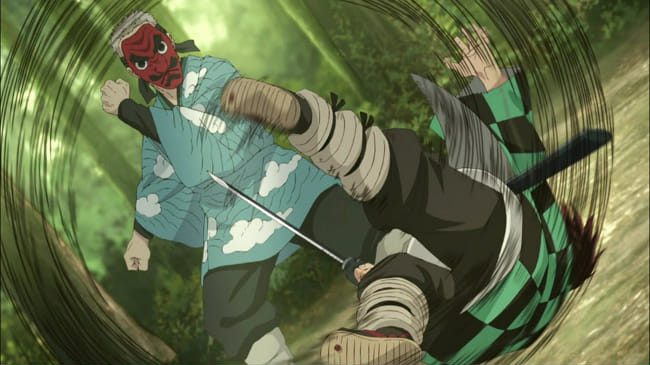 When Cell came from the future to destroy the planet, there was no hope. Cell kept sucking the human race slowly and painfully. The Future Trunks warned everyone of Android 17 and 18 but he never imagined what a little change in the past can do in the future. Cell survived this future. And this turned out to be worse than the future with android 17 and 18.

Goku and Gohan, the father and son duo decided to use the hyperbolic time chamber to train 1 year’s worth of training in a day. And that training with heavy gravity in different time and space turned out to be fruitful. When Vegeta and Trunks could not take down Cell, Gohan was able to take him down alone. There was a time when even Gohan started having the Saiyan ego due to which Goku had to lose his life, but in the end, Cell was defeated for good.

Even though Saitama never had a training arc, it would be a waste if we did not mention his training here. After all, we got the overpowered, undefeated Saitama because of his personal training schedule. We all have tried his schedule to be as strong as him even though we know that can never happen.

“Train so hard until you feel like either you’ll die or you’ll lose your hair. That’s the only way to become truly strong”. This line rocked our worlds. We all believed it with our eyes closed. The 100 situps, pushups, squats, and the 10 km run schedule made him who he is. And we all tried to be him. 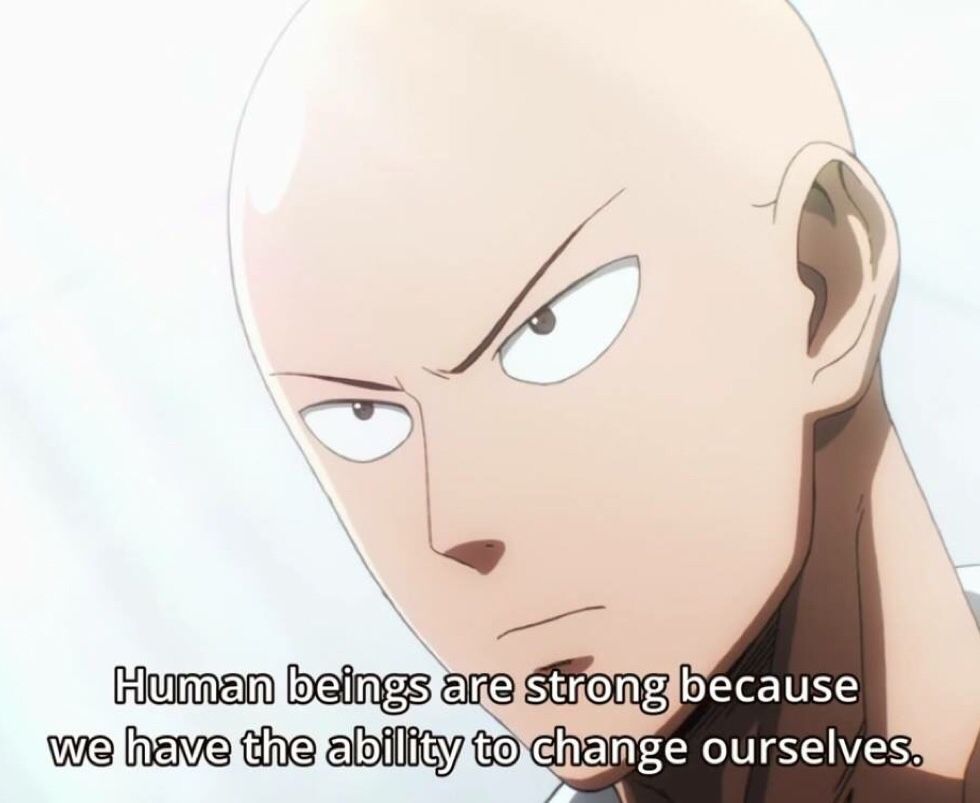 The training of Class 3-E students to kill Koro Sensei was one of the most epic moments we have ever seen. In the beginning, we couldn’t understand Koro sensei’s motive behind training these kids to kill him. But, we all wish to have a teacher like him who genuinely cared about everyone.

We saw the result of their training when the new gym teacher, Takaoka appeared for the first time. At first, he seemed like a good guy, we all smelled a bad guy out of him. And the way Nagisa scared him out, was very satisfying. All those time trainings to kill their sensei, no one imagined would be so heartbreaking. All those times, they made their training look fun. But, when the time came, everyone was heartbroken. 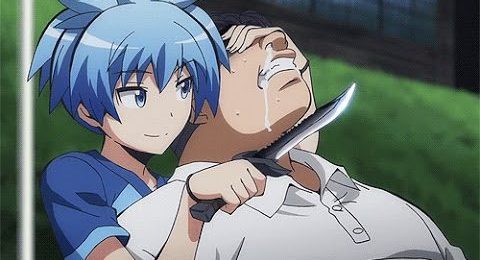 Ichigo needed urgent training but there was no time. So, Isshin came up with a plan to help Ichigo run faster than time to master his Final Getsuga Tensho in time. Ichigo had no other option but to agree, but he ended up encountering Tensa Zangetsu, and this made his training tricky. This training to win over his sword was like a war in his head. And such wars are the worst. You either conquer everything or you lose everything. Meanwhile, Aizen and Gin bring trouble with them to Karakura Town. 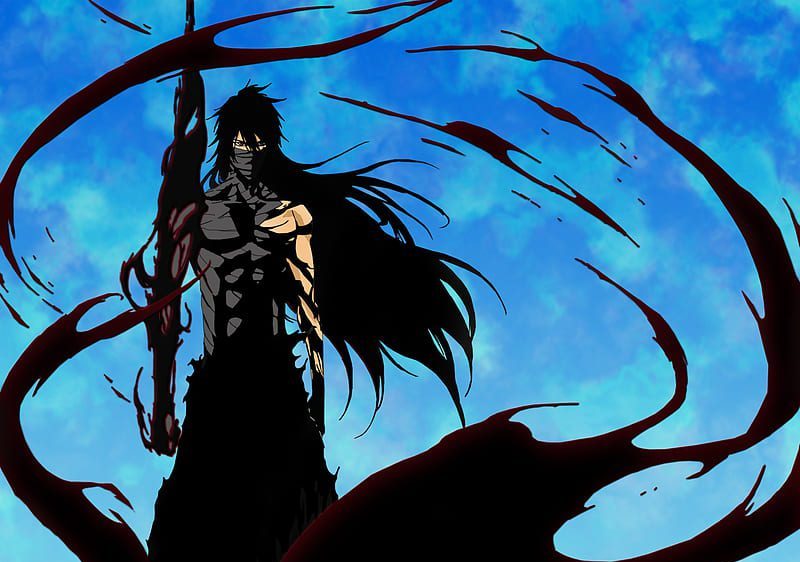 9. Haikyuu: Karasuno High In A Training Camp With Other Teams

When Karasuno High got invited by Nekoma High along with Fukurodani Academy, Shinzen High, and Ubugawa High, they all got the opportunity to hone their skills. Usually, a normal sports anime training arc is expected to be boring, but Haikyuu is different. It has serious as well as hilarious moments to keep us in our seats. During this training arc, we saw rivalry as well as friendship. We could see what might happen in the future between Nekoma and Fukurodani. 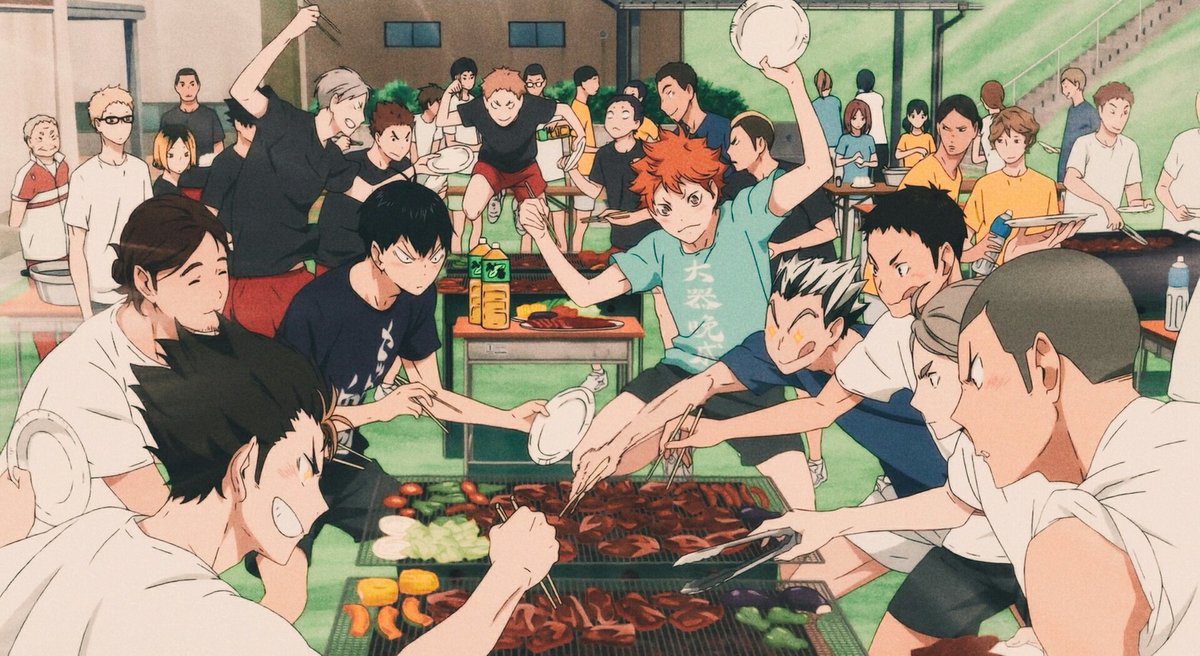 Also Read: 10 Reasons Why Haikyuu Is The Best Sports Anime

We all saw sorts of serious training. But here’s one training a bit different from the other ones. Assault, a professional killer of White Clad was supposed to face off the members of Company 8. But little did he know about Tamaki’s lucky lewd lure. We can’t deny that we do like her lucky lewd lure. But, Assault has his weakness. And Tamaki’s lucky lewd lure was the one. Every encounter with her would end up with him being defeated with lots of nosebleeds. You can imagine what must have happened. 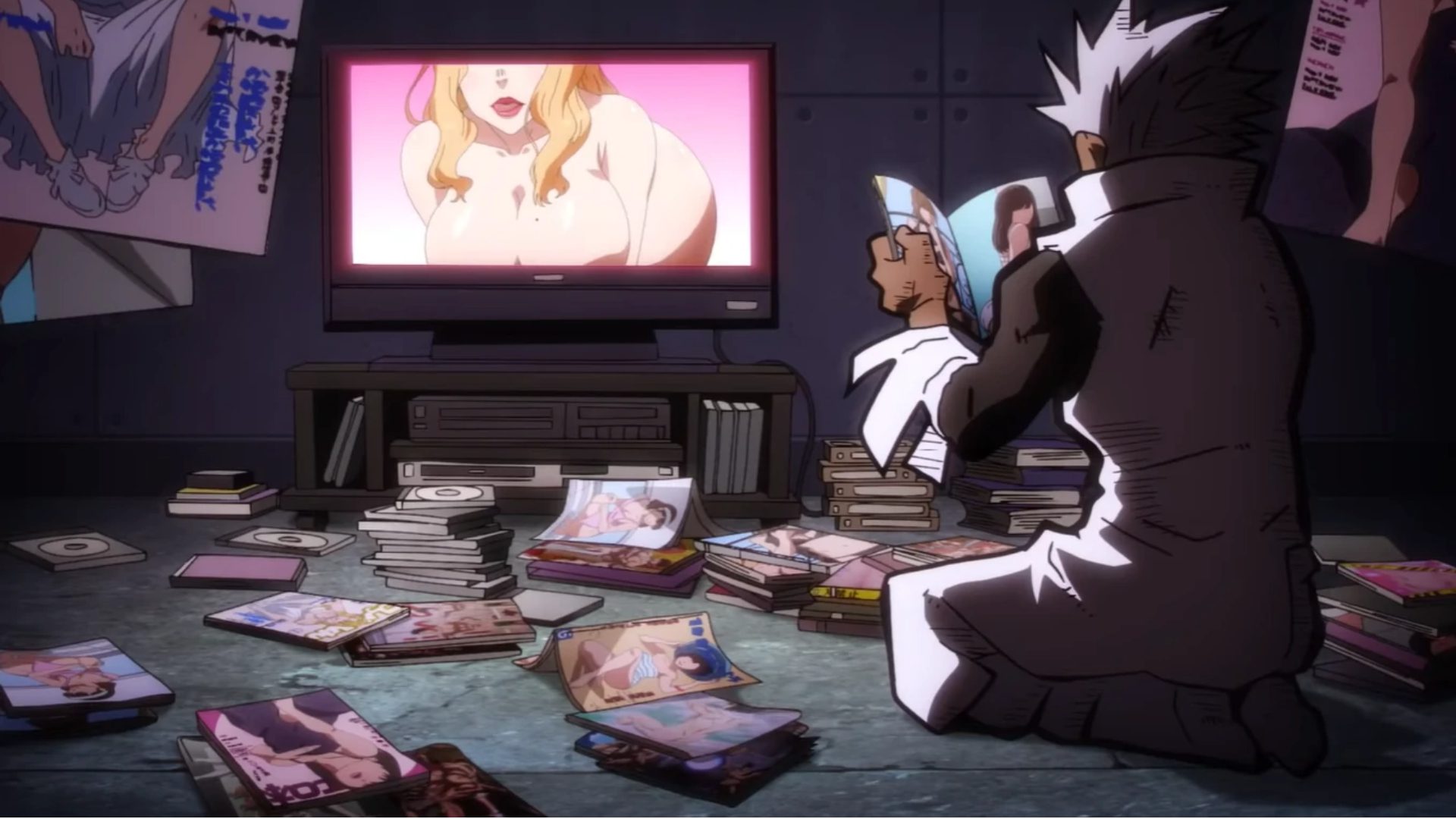 Also Read: What to Expect From Fire Force Season 3?