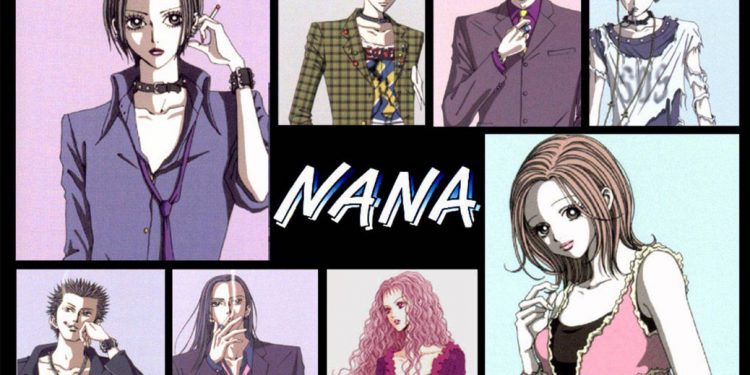 Josei as a genre is one of the most underrated genres of manga and anime. Josei animes are specially made for the target demographic of adult women, with a realistic slice of life concepts, drama, and romance. Even though this genre doesn’t get much love from fans, with shounen anime like Dragon Ball Z, One Piece, and Naruto always making the headlines. However, even though josei animes are not that marketable, they have found their own kind of success.

Speaking of, Nana has been one of the most successful josei animes to ever come out of Japan. It’s a story about two girls with the same name, ‘Nana’, and their new life after moving to Tokyo. One Nana is an upcoming singer trying to make it big in Tokyo with her band. And the other Nana is someone who left her hometown to live with her boyfriend in Tokyo. A gritty and dark take on romances, failures in love and life. The manga was written and illustrated by Ai Yazawa. It premiered in the July of 2000, but it was put on hiatus in 2009 due to Ai Yazawa’a health. However, that didn’t end the fan’s love for this series.

The anime starts with Nana Komatsu getting on a train to Tokyo from her hometown. She sits beside a woman, clad in an all-black ensemble and carrying a guitar. A full-on punk rocker. As Nana is mesmerized by her long eyelashes, the train stops because of heavy snowfall. The two women start chatting to alleviate their boredom, and they soon find out that they have a lot in common. They are both 20-year-old women who are leaving their hometown. They are both pursuing something in Tokyo. And, the biggest reveal, they are both named Nana. Nana Komatsu(Hachi) and Nana Osaki.

When the two go to buy their own individual flats, they meet each other again in the same open house. Both of them like and decide to live with each other since they already know each other well, and because the rent would be cheaper. This is where their lives get intertwined, and the true story begins. Hachi meets Nana’s band members from BLAST, and Nana meets her school friends. As the series goes on, we see how much they both needed this friendship to get them through the fast city life in Tokyo. They form a very strong bond. Hachi is protected by Nana in many situations. Whereas Nana depends on Hachi for a sense of belonging, and she is very possessive of her.

Even though it’s been such a long time since the release of this anime, fans of Ai Yazawa have not forgotten it. Nana was a cultural phenomenon having a big impact, especially in Japanese fashion. So here are some amazing and unforgettable quotes from Nana!

1. “People can have lovers. They can have friends. They can be together. But when you think about it, you’ll see that originally, we’re alone.” – Nana Osaki

oh, the irony! This quote tells us about the dilemma of the human experience on Earth. The lines were said by Nana Osaki, and we get to know just how independent and strong-willed she has made herself to be able to say that. She kind of means that about Hachi, who always looks for a companion in whatever she does or just follows others to be with them. Hachi tries to fill her emptiness by falling for men very easily and builds her own ideals around them, only to get crushed when things turn out differently. Nana asks her to think about life in a new way through these lines.

2. “Don’t just give up. Life is about getting knocked down over and over, but still getting up each time. If you keep getting up, you win.” – Nana Osaki

Nana Osaki was born to loveless parents, Her father left them, and her mother left her with her grandmother when she was four. She grew up with her maternal grandmother, who was very strict. Nana was made to help at her grandmother’s restaurant without any pay. Then her grandmother also died when she was just fifteen. She’s been all on her own since then. Nana’s life has always been filled with obstacles. But she has never been one to back down when things get rough. This quote sums up her life quite well.

3. “Even though it’s painful sometimes if you keep on living then good things can happen.” – Nana Komatsu (Hachiko)

Hachiko’s speaking facts for anyone going through a hard time. She has been through a lot, just like the other Nana. Some may overlook her struggles as just boyfriend woes, but it’s definitely more than that. Hachiko was born with 2 other sisters, so she wasn’t really given much importance at her home. When she was not even out of high school, she was groomed by a 29-year-old married man to be in a physical relationship with him. Her next long-term boyfriend also cheated on her. She has always been strung on by the men in her life. Hachi was looking for a love that’s all-binding and never-changing. However, during her time with Nana, she matures enough to love life.

4. “When it’s cold outside can’t help but pray that someone is there keeping you warm” – Nana Osaki

Nana says this about her lover Ren in episode 5 while looking at a poster of TRAPNEST in a metro station. This is the episode where we get to see Nana’s backstory and her relationship with Ren. After Ren leaves for Tokyo to join TRAPNEST as their new guitarist, BLAST is left incomplete. Nana didn’t want to tag along with Ren as she wanted to move to Tokyo only on her own terms. She didn’t want to be just his housewife. But she still wishes him well while looking at his poster on snowy winter nights.

5. “People say love can be developed, but in the end the only person they love is themselves, that’s why you choose to love someone who can please you the most.” – Takumi Ichinose

What a selfish and capricious man! That’s the best way to describe Takumi. He always wants to control his surroundings. In his band TRAPNEST, he has almost full artistic control as he produces all of their tracks. He always checks on everyone to make sure they give his level of performance. This quote suits his personality very well. Takumi is someone who would always be controlling in a relationship, want the other person to love him unconditionally even if he doesn’t.

6. “You know, Nana… Even now, sometimes on street corners… when I meet someone, I see your shadow. I’m sure that even now, you’re still wearing that man’s cologne… so you can sleep, even alone.” – Nana Osaki

Nana Osaki says this regarding Hachiko’s on and off relationship with Takumi. Hachiko had admired Takumi from afar for such a long time that when she meets him, she gets starstruck. And Takumi is a womanizing rockstar, so he uses his fame to sleep with her. He always keeps leading her on by arriving at random times and then acting as if he cares about her. He is a powerful man who is crazy about controlling every aspect of his life and the people around him. Hachiko would keep his empty cigarette boxes or his cologne because she missed him so much while he was gone. That was the reason why Nana said this about her.

7. “It’s dangerous here. If you stare at the stars long enough, you start thinking you could grab one, and you get this feeling like all your dreams will come true.” – Shinichi Okazaki

Shin Okazaki is the new bass player of BLAST who joins them after they arrive in Tokyo. He is only 15 but lies about his age to get into the band. When he auditions for the band, Nana gets especially stunned because his bass-playing style is just like Ren’s style. He is a really good player even though he is only a teenager. He joins to fulfill his dreams in the music industry and get away from his family. Shin is also from a rich family like Nobu, their guitarist. He is usually always cheerful but has his own somber moments, like with Reira, and he also cares deeply about his band members. Shin says this quote about his life here in Tokyo, coming so close to fame, almost reaching that high yet not quite there.

8. “When you fall in love with someone, you want everything from them. Its only natural to feel that way… but real love can only happen when you want what’s best for the other person and never ask for anything in return.” – Nobuo Terashima

Nobu is such a sweetheart throughout the whole series. He cares a lot about his bandmates and always dreamt about making it big with them. He is talking to Shin when he says this. He has fallen for Hachiko, but unfortunately for him, Hachiko is already in love with Takumi. Nobu thinks of Hachiko as someone who is pure and is being made a fool of by Takumi. He wants only the best for Hachiko, and he thinks he can’t compete against Takumi. Nobu also can’t tell her about his feelings for the fear of being rejected. Shin only tells him that he has a warped concept of what women are actually like and places way too high expectations on them.

9. “Laugh at love and love will make you cry.” – Yasushi Takagi

Yasu says this to Ren when he, Ren, and Nobu are sitting together at Nobu’s house in episode 5. They are discussing forming a new band with a female lead singer. Ren asks Nobu to find a beautiful girl for the job. But Nobu complains, saying, why can’t Ren do it himself when he is always surrounded by girls. To which Ren replies that one should never mix business with pleasure. Nobu chastises that he should try falling in love to which Ren just laughs. That’s when Yasu says this quote very seriously, making it apparent that he fully believes all that he’s saying.

10. “Love, it’s a story between two human beings so if you can’t think of the other, it’s possible that it won’t work.” – Junko Saotome

Junko is one of Hachiko’s oldest friends from school. They’ve always hung out together, and she was always the calm one between the two girls. She tries to calm Nana down and give her a dose of truth whenever Nana gets too engrossed in her own world. This quote is something Junko says about love. Junko has been in a relationship with Keosuke for a long time, so her words about love are to be trusted. She has always given good advice to Hachiko although she can very harsh if need be. There are times when I don’t agree with her harshness but she has always had love in her heart for Nana.