Do you love Horimiya and can't get over it? Here's a few anime to get you out of you slump. 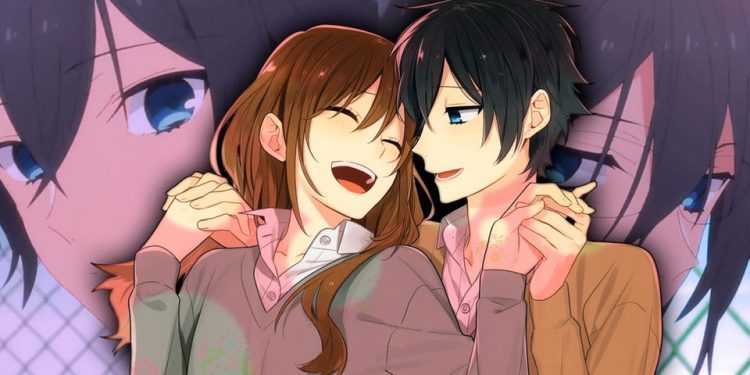 Horimiya is a wholesome manga as well as anime. Hori-san and Miyamura are one of those couples who are so realistic, yet it seems like a heavenly romance like that could possibly just happen in fantasies. So, after watching it, one may want to watch anime similar to Horimiya. The anime depicts that first impressions aren’t real, and love can have insecurities and flaws, but at the end of the day, what really matters is how much both of them love each other’s company.

Hori liked Miyamura’s empathetic nature. He was someone she could speak with an open heart. She didn’t have to maintain a perfect image in front of him. Whereas Miyamura could be quite meek and aloof when he was alone. Hori’s company made him feel warmer. He is a single child, and like all single children who have working parents, he felt alone and ended up getting tons of piercings as well as tattoos in the search to find himself.

Hori might seem like the perfect beauty with brains, and Miyamura might look like a perfect nerd, but when they open their true selves to each other, they find a beautiful bond between themselves. They have opposite personalities yet similar habits. Watching this anime surely would have made the viewers crave more of Horimiya. The first option is to read the manga because it’s so elegantly made. The second option is to watch an anime similar to it so that they can finally get out of the slump! Anime slumps can be quite tough to handle, especially when the anime you watched is an amazing rom-com like Horimiya!!

So, here we have 10 Anime that are similar to Horimiya:

Nisekoi is a cute rom-com with a wholesome comedy! What happens when the successors of two yakuza gangs are forced to date to keep the peace in the city? Raku is in love with Onodera but is forced to date the tsundere Chitoge. Among conflicts and spites, will love finally bloom? What will happen when Raku comes to know that Onodera loves him too? A fun anime with a few twists and turns as well as opposites falling in love trope might make you fall in love with this anime. There are two seasons, so it’ll definitely make your heart warm in this cold winter.

Also Read: Will there be a Pandora Hearts Season 2?

Another opposite personality trope with a competitive female lead who’s the student club president and a cool laid back popular guy meet and fall in love? One day, Takumi Usui goes to a maid cafe and is surprised to see Misaki working as a maid. Thereafter, he continues to go there, much to Misaki’s annoyance. The hilarious moments and the interesting side characters will totally give you Horimiya vibes for sure!

8. Tonari No Kaibutsu-kun “My Little Monster”

This one is a heartwarming romantic comedy! My Little Monster is an opposite personality trope, just like Horimiya. Shizuku Mizutani is always studying, whereas Haru is the school’s bad boy who scores low grades. Don’t judge a book by its cover applies here. Haru is actually very intelligent, whereas Mizutani studies hard because she is not a born genius. When both of them encounter, there’s bound to be lots of dumb fights, kisses, and coming of age. The back story, as well as the plot, is quite similar in context to Horimiya, so you might fall in love with this underrated anime!

7. Kareshi Kanojo no Jijou “His and Her Circumstances”

His and Her Circumstances follow similar storytelling as Horimiya. It’s one of the old anime that was aired in 1998-99. It features the life of Yukino Miyazawa, who is the class representative and a brilliant student!! Whereas in reality, she’s a perfectionist who might get a little obsessed with her perfect image. She can’t stand Arima, who is always on the 1st rank. But when she finally grabs first place, Arima congratulates her on getting the first rank. This led to thinking about how it wasn’t great to live such a deceptive lie. Rivals turn into lovers even though they face a lot of problems that every couple faces. The realistic approach is highly appreciated in this one.

The story is set mainly at school, and the protagonists fall in love even though they have such different personalities, circumstances, and even popularity statuses! Sawako, who is nicknamed Sadako because she looks like a ghost lowkey and her a meek personality. Sadako likes Kazehaya and is naturally drawn to him since he has a refreshing personality. Both of them eventually start talking, which leads to them falling in love with each other.

Mei’s life begins to change drastically when she starts to misunderstand the popular student Yamato Kurosawa. Mei is a quiet person with a bold personality. She was betrayed by her friends all throughout life, leading her to not trust people completely. All of this changes when Yamato starts being friendly with her, and she eventually starts making good friends. She slowly realizes that there are all sorts of people in the world, and her feelings for Yamato might not be totally platonic. Yamato likes Mei, and they start dating, and through misunderstandings of their new relationship, and jealousy, and other things, both of them slowly grow closer and learn the true meaning of those three little words: “I love you.”

Hachiman is an aloof high schooler with a pessimistic perspective on the world, especially high school. One day he’s punished and asked to write a paper on Social Relationships, which leads him to join the Volunteer Service Club. This club’s purpose is to help any student who is in need. Here, he meets Yukino, the ice queen. Both of them solve the problems of their peer and hang out. Will this blossom into some complicated infatuation or a healthy love? Let’s find out!

3. Dakaretai Otoko – “I’m being harassed by the sexiest man of the year”

Takato Saijou has been holding the title of “Sexiest Man of the Year” for five years. He is a talented actor with a well-built career of 20 years of experience. He had been acting since childhood. He is confident and has a charismatic personality. That’s the outer layer, but as we go inside the layers, there’s a weird judgemental guy with a rather open mind, and he literally passes comments on everything. He’s pretty much a narcissist as well.

Soon, a newbie called Junta Azumaya snatches off his title. Suddenly, Junta was declared as the male protagonist of the drama, and Takato was appointed as just the side character. Takato gets angry and jealous of him. He doesn’t show it in front of Junta, though, and puts up a cool facade. What’s more enraging is the fact that Junta idolizes Takato and is literally an angel!! This is a story of two guys with opposite personalities falling in love. The rom-com is as fun as Horimiya, but instead of school, it’s based around the acting industry and puppy love.

Also Read: Will there be a Pandora Hearts Season 2?

2. Wotakoi: Love Is Hard For Otaku, A Workplace Romcom!

If Hori and Miyamura stayed as friends and met again in an office, it’d be Wotakoi! Hirotaka Nifuji is a closet gamer, and Narumi Momose is a closet BL anime and manga fan. When both the friends meet again in the same office and find sparks between themselves, what will happen? They totally fall in love and get into a secret office romance while keeping their geeky side a total secret from others.

Due to a tragic accident, Banri Tada gets amnesia, and his friend Yanagisawa convinces him to begin a new life at a law school in Tokyo. As he begins to adjust to his college life, a beautiful lady called Kouko Kaga dramatically barges into Banri’s life. She and he become close friends, and their adventures of college life mark the beginning of an unforgettable year.

Banri eventually learns that he is a new world—a place where he can find himself, find new friends and fall in love, make mistakes, and grow. Kouko had a bubbly personality, whereas he had quite a shy and fun personality. Both of them find the true meaning of love just like Horimiya’s couple.