After a great debut season, the series chronicling the life of Jedi Master Obi-Wan Kenobi Season 2 release date comes to question. Is it happening or was it a standalone miniseries? We will answer this question in this post as well as give you an in-depth recap of the first season. Moreover, we will explore other details concerning this Disney+ original production.

Obi-Wan Kenobi is an Original Disney+ series that debuted on the platform worldwide about a month ago with great fanfare and expectation. So, what’s all the hype about? Can the story arc have a sophomore season? Join as we explore that possibility. Now without further ado, let’s begin!

This series takes place ten years after the Jedi were all killed under Emperor Palpatine’s orders in Revenge of The Sith. Here, we see an aging Obi-Wan living in exile in Tatooine, watching from afar a young Luke Skywalker as he lives with his Aunt Beru and Uncle Owen. Out of nowhere, Senator Bail Organa calls upon him. It turns out that the Inquisitors, an elite order of fallen Jedi who turned to serve the Empire are out there hunting the remaining survivors of the Jedi Order. And they’re hellbent on finding Master Kenobi.

So, the Inquisitors devise a plan to kidnap a young Princess Leia to lure Obi-Wan out of exile. And they succeed in their plan, Bail Organa and his wife call out to Obi-Wan for help, and he sets out to rescue Leia, albeit reluctantly. So, he unearths his lightsaber and Jedi gear after he sees what the Inquisitors do in Tatooine. So, Kenobi sets out to the city-planet of Daiyu, where he meets a swindler name Haja Estree who will help him along the way. There, he meets Leia and starts to see some of the traits of both her mother and father in her bravado.

Firstly, Leia’s doubtful about Kenobi’s intentions. So, she doesn’t follow his instructions, and her reluctance leads to a terrible fight on the rooftops of the city. Because Obi-Wan doesn’t want to use his force powers to reveal his location to the inquisitors. Leia doesn’t think she’s a Jedi. But the moment she falls off a cliff, he must employ the force to slow down her fall, and there, she’s convinced that he’s a Jedi and begins to trust him. From that point, a strong relationship between the two emerges.

The Inquisitors manage to track the two to a spaceport, but they make it out in the nick of time to Mapuzo. Vader orders Reva to find Kenobi in his fortress on Mustafar. Promising to promote her to Grand Inquisitor if she succeeds. The transport carrying Kenobi and Leia lands on the mining planet Mapuzo and proceeds to the rendezvous set up by Haja. They take a ride on an Imperial vehicle after finding no one there.

They are discovered, and Imperial troops are dispatched to capture them. Still, they are assisted by Tala, a female Imperial officer member of the Path, an underground network that hides dissidents and outlaws pursued by the Empire. She leads them to a hidden underground passageway. But before they can leave, Darth Vader and the Inquisitors arrive and begin harming innocent bystanders to entice Kenobi. Kenobi dispatches Leia and Tala ahead while he acts as a distraction. He is eventually confronted by Vader, who uses his Force choke to overpower Kenobi and burns him, leaving him in pain. Tala provides a distraction to save Kenobi, but Reva captures Leia.

Kenobi and Tala arrive at a Path facility on Jabiim after escaping Vader on Mapuzo. Meanwhile, Leia, who Reva is now interrogating for information on the Path, is being held on Fortress Inquisitorius, the Inquisitors’ stronghold headquarters on Nur. Kenobi and Tala intend to infiltrate the fortress to rescue Leia.

Once inside, Kenobi discovers a trophy vault containing the preserved corpses of Jedi captured and killed, including a Youngling. They successfully rescue Leia, but Tala’s cover is blown, and their presence is revealed; they eventually escape with the assistance of Path commander Roken and his guerilla troops. Enraged by the events of the day, Vader plans to kill Reva for her failure. But she is saved when she reveals that she had attached a tracker to Leia’s companion, droid Lola in anticipation of a rescue. 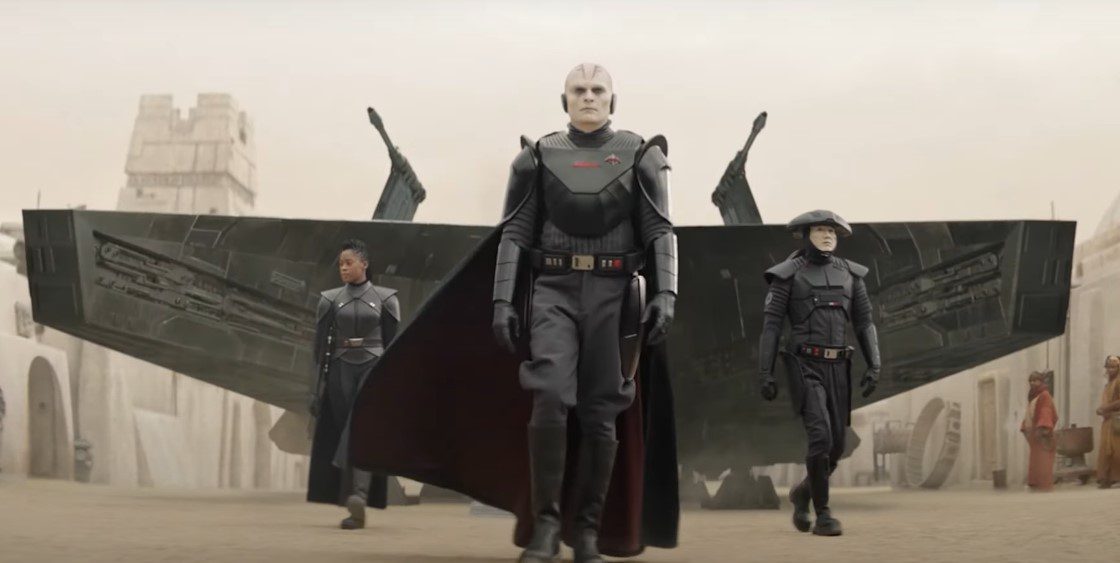 The Inquisitors, the main antagonists in this series

While Reva searches for Luke on Tatooine, Vader pursues Kenobi and the Path in his Star Destroyer. Kenobi separates from the group, realizing there is no other way for the Path to escape. On a nearby planet, he fights Vader alone and damages Vader’s helmet. Kenobi abandons Vader after concluding that Anakin cannot be saved. Meanwhile, Reva has arrived at Owen’s farm and is engaged in combat with Owen and Beru. She follows Luke into the desert but is unable to kill him and eventually returns him to his family. Kenobi congratulates her on defeating the Dark Side and her past.

Back on Alderaan, Leia has renewed her commitment to her responsibilities as a princess. A visiting Kenobi assures the Organas that he will assist when called upon and bids Leia farewell. When he returns to Tatooine, he assures Owen that he will let Luke grow up like any other boy and is allowed to meet him for the first time. He finally can see and communicate with the force ghost of his deceased master, Qui-Gon Jinn, after achieving inner peace. After the Emperor questions his motives and loyalty, a restored Vader abandons his search for Kenobi on Mustafar.

If the series gets picked up for a sophomore season, we can expect to see more of how Obi-Wan expands his relationship with Qui-Gon Jinn and with an elder Leia Organa. Moreover, we could see how Reva’s story arc unfolds. Furthermore, the sophomore season could expand the Galactic Empire’s reach upon the rest of the universe. All things considered, the possibility for a sophomore season is kind of limited because the canon and the timeline for Obi-Wan’s exile in Tatooine are limited.

But maybe the writers could skip that and take us back in time like they did with the Clone Wars animated series or something like that. For Disney and the Star Wars saga, the sky is the limit when it comes to milking that cow of a franchise! We will keep an eye out for this kind of information. And post an update for you if anything pops out.

Should the series be renewed, we can expect Ewan McGregor to reprise his role as Obi-Wan Kenobi, and Hayden Christensen as Anakin Skywalker/Darth Vader. As for the rest of the cast, maybe we could see Moses Ingram play Reva again as well as Joel Edgerton’s play Uncle Owen. Also, Bonnie Piesse as Aunt Beru. Also, Jimmy Smits would reprise his role as Bail Organa.  But given the possible new plot, we should expect new cast members as well.

Can the series return for a sophomore season?

Firstly, Obi-Wan Kenobi premiered on May 27, 2022 and concluded on June 22, 2022, for a six-chapter run with episodes running between one hour and 48 minutes run time. Here’s what we know so far. There won’t be an Obi-Wan Kenobi Season 2 because the series was intended as a standalone series.

Moreover, the series intended to gauge the audience’s interest for a spin-off film on the Jedi Master. And then concluded in just doing a single season. After all, if you follow the Star Wars canon, the adventures of Obi-Wan don’t give out for much more because after his last adventure he retires into exile prior the events of Star Wars: Episode IV: A New Hope.

We still have good news though. Disney and Lucasfilm could explore on the possibility of doing a spin-off series based on Darth Vader and his Galactic Empire shenanigans following his last battle with Obi-Wan in this series. But that’s just speculation. We will keep an eye out for this and let you know about it. That’s all the time we have for Star Wars here today at Otakukart. Thanks for your attention. And may the Force be with you! See you soon!