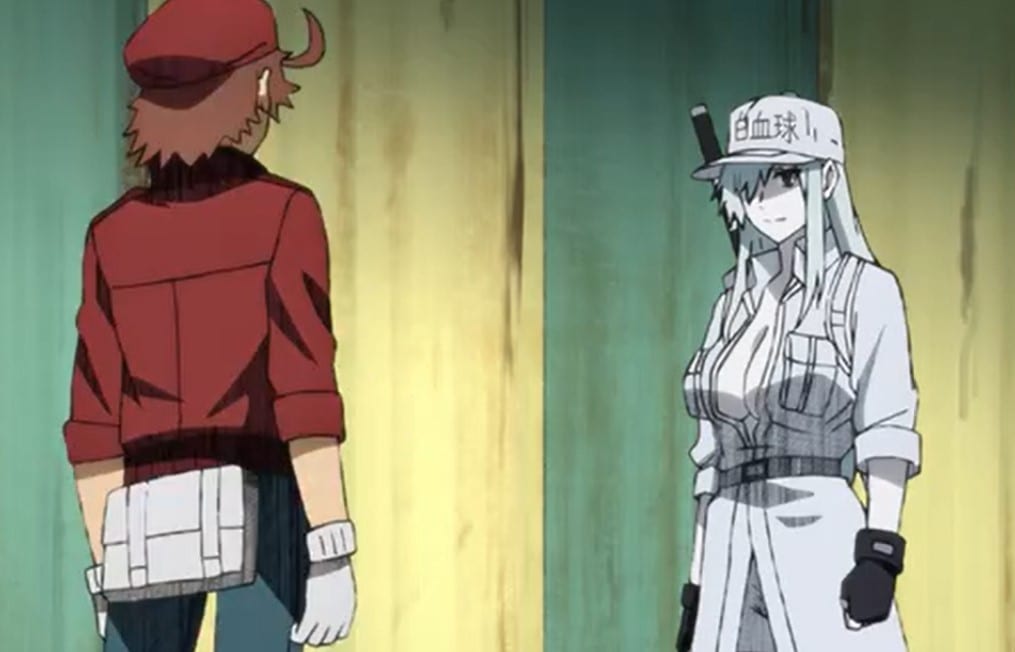 U-1196 is with her team heading to deal with a problem inside the body. Other cells are wondering why she is in a hurry. She told them that the body hadn’t gotten any sleep for the full two days. When they arrive at their target, they find a hundred of Red Blood Cell Sleeping. U-1196 is wondering why they are sleeping instead of doing their work for the body to function properly. Earlier before the incident, AA visited an ordinary old hag cell.

He hands her the oxygen she has asked for and give her a receipt. The old hag asks him what was happening at the ceremony. AA reveals that he has won a Top Rookie Award. The old hag started yelling at AA, thinking that he is getting full of himself since the ordinary cell have never won anything. She also comments that she kept on seeing Red Blood Cells being showered with praises in their youth for all her childhood life.

Cells at Work Code Black Episode 9 will be released on Friday, 19 February 2021, at 2:30 AM on Crunchyroll, AnimeLab, and Funimation. Take a look at how the Red Cells will be saved below. 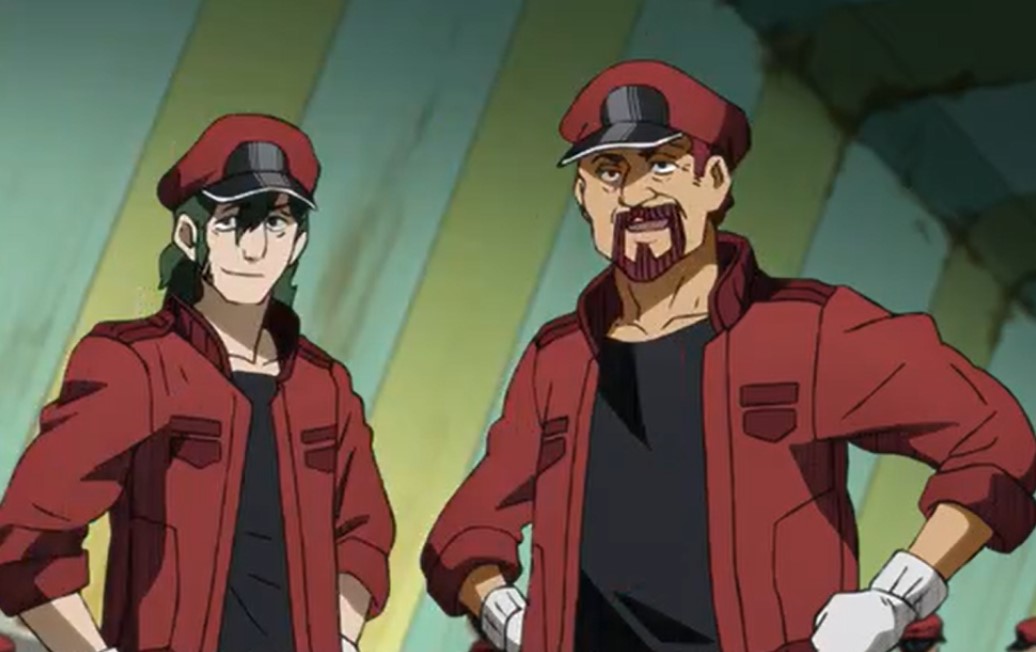 The old hag said that it would take time for her to acknowledge AA. Because most of the Red Blood Cells end up losing the right path due to fame. She sends AA away to go and deliver oxygen. But she is impressed that AA is n to like any other Red Blood Cells. On his way, he met with AC. They two are glad they have reunited and working together again. AC heard other cells screaming and saw the smoke of carbon monoxide.

AA and AC run to a safe place since the gas can cause suffocation. AC is worried that they have just come back from work, and the incident keeps on happening. While they are still taking a breath, one of the old hunk from the Red Blood Cells confronts them. He talks with them about their work and how they have to keep it up. He also told them that the Red Blood Cells numbers are deteriorating, and the young guy like them has to step up.

The old hunk told them that they have to show youth’s power since they are still active and fast. AA and AC realize that the old hunk tells the truth since the oldies can’t keep up. They are tired, and they get to deliver the oxygen late while delaying some important processes. The alcohol started pouring inside the passage, and the old hunk thinks they can have some lovely ladies detox them in the liver.

AC thinks the hunk is right since it has been a long time for him without going there. The trio head to the liver territory to activate vitamins and minerals. When they reach the AA cannot believe that it is not lively like before, and the old hunk said many places had been shuttered. They pass by Blood Alley, Bile Town, and realizes that it is desolated. The place is all messed up, and AA is worried if the Hepatocyte is okay. 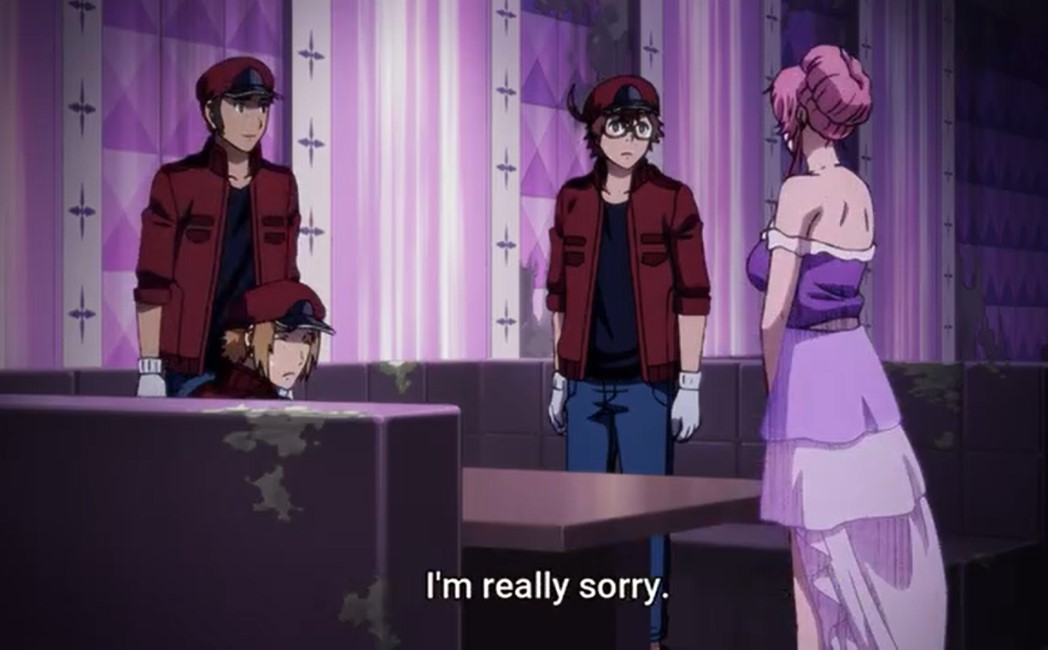 AA reached the venue and found an oil geezer drinking, and the venue is all messed up. He asks what happened to all the glitz and glamor. They both find a place to sit, wondering what they should do. No one was giving them answers since they are all drunk, and one of the ladies approaches them. AA can’t believe that it is Hepatocyte she welcomed them. She also apologizes for the messed up place and explains why it is like this.

Hepatocyte reveals that there has been a surge in triglycerides caused by alcohol, the liver functions have been impaired. Fatty liver started developing caused by alcoholism, which prevents the liver from functioning normally. If not attended, it can lead to hepatic cirrhosis or liver cancer. Hepatocyte started coughing, and AA thinks that she might be suffering from alcoholism. She promised to take care of her health.

One of the Red Cells came and called the trio to come and help since they are short in men. The two lazy punks that tease AC showed up and started to tease him. They think that the two are trying to be a hero by working without resting. They also comment that they will get a book and fill it with their heroic works. AC told AA that they could just leave and ignored them. The red mustache punk comments that it is so cold AC since they are friends.

He reminds him of the time when they drink booze together. AA realizes that AC might try to pick a fight. He gives the two punks a fitting reply, and they left. Later the building collapse and the two punks get their chance for revenge; they refuse to save AC. Fortunately, U-1146 arrives in time and saves the Red Blood Cells along with AC.