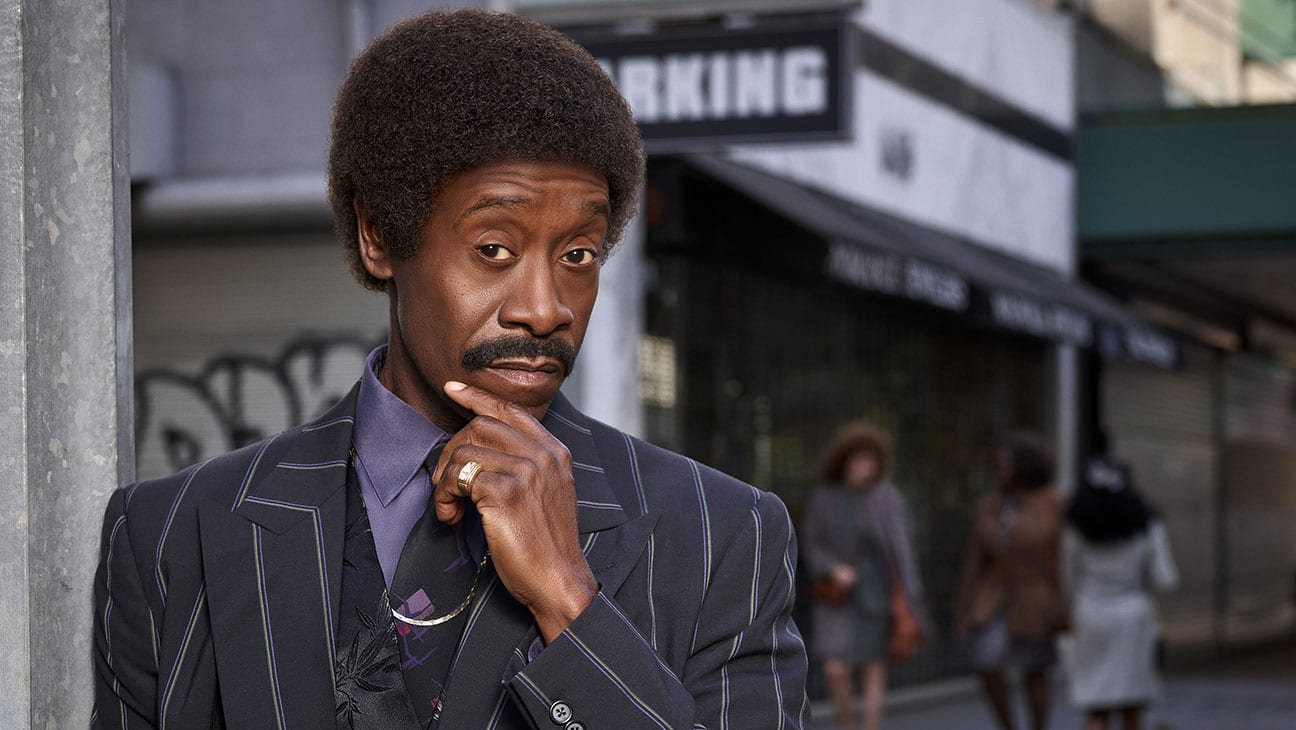 Donald Frank Cheadle Jr. is professionally known as Don Cheadle. He is an American actor, author, director, producer, and writer. Cheadle began work from Hamburger Hill in 1987, followed by the gangster role of “Rocket” in the film Colors in 1988.

Don Cheadle rose to fame in his career in the 1990s with roles in Devil in a Blue Dress, Rosewood, and Boogie Nights. He collaborated with director Steven Soderbergh in three films. They were Out of Sight, Traffic, and The Ocean’s Trilogy. Don is the greatest actor of his generation, he has done all from comedy to action to dramas.

Don Cheadle was nominated for an Academy Award for Best Actor for his lead role as Rwandan hotel manager Paul Rusesabagina in the historical genocide drama film Hotel Rwanda. From the years, 2012 to 2016, Don starred as Marty Kaan on the Showtime comedy series House of Lies. For his Television performance, he won a Golden Globe Award in 2013.

Today Cheadle’s ten best roles will be counted and listed according to IMDb.

The Guard is a 2011 Irish buddy cop comedy film.

The Guard received acclaim and was a mega success. Cheadle was praised for his performance. And Gleeson received a Golden Globe Award nomination. The Guard is the most successful independent Irish film of all time in terms of Irish box-office receipts. This one beat The Wind that Shakes the Barley of 2006.

McDonagh was nominated for a BAFTA Award for his writing achievement on The Guard.

Reign Over Me: Five years have passed since Charlie’s wife and daughters died.

Reign Over Me is a 2007 American buddy drama film.

The film is written and directed by Mike Binder. The producer of the film is his brother Jack Binder. Reign Over Me stars Adam Sandler, Don Cheadle, Jada Pinkett Smith, Liv Tyler, Donald Sutherland, Saffron Burrows, and Mike Binder.

Don Cheadle plays Dr. Alan Johnson and Adam Sandler stars as Dr. Charlie Fineman. Reign Over Me was distributed by Columbia Pictures. The movie centers around the fall of Twin Towers that went down in 2001. Charlie Fineman lost everything important in his life. Their fate brings Charlie and his former college roommate Alan Johnson together in a dramatic tale.

The movie is directed by Steven Soderbergh and written by Stephen Gaghan. Traffic talks about the illegal drug trade from many perspectives: users, enforcers, politicians, and traffickers.

Ocean’s Eleven traces the tale of Danny Ocean (Clooney) and Rusty Ryan (Pitt). He plans a theft of $150 million from casino owner Terry Benedict (García). He is the lover of Ocean’s ex-wife Tess (Roberts).

Oceans was a massive success at the box office and with critics. Ocean’s was the fifth highest-grossing film of 2001, with a worldwide gain of $450 million.

The film is directed and co-written by Paul Haggis. Crash features the depiction of racial and social tensions in Los Angeles.

This project was self-described by the director Haggis as a “passion piece.” The movie was inspired by a real-life incident in which his Haggis’ was carjacked in 1991 outside a video store on Wilshire Boulevard.

The film is based on the Marvel Comics titular character Captain America. It was produced by Marvel Studios and distributed by Walt Disney Studios Motion Pictures.

The film is written and directed by Paul Thomas Anderson. Boogie Nights is set in Los Angeles’ San Fernando Valley. The story focuses on a young nightclub dishwasher who becomes a popular star of pornographic films. Don Cheadle stars as Buck Swope.

Hotel Rwanda: set in 1994 during the Rwandan Genocide.

The film is directed by Terry George. Hotel Rwanda is an adaptation from a screenplay co-written by George and Keir Pearson. It stars Don Cheadle and Sophie Okonedo as hotelier Paul Rusesabagina and his wife Tatiana.

Hotel Rwanda talks of the Rwandan genocide, which occurred during the spring of 1994. Hotel Rwanda has detailed the Rusesabagina’s efforts to save the lives of his family along with a thousand other refugees by giving them shelter in the besieged Hôtel des Mille Collines.

Hotel Rwanda explores genocide, political corruption, and the repercussions of violence as its main themes. Don Cheadle stars as Paul Rusesabagina. In the Rwandan Genocide, an estimated 800,000 people, mainly Tutsi, were killed by Hutu extremists.

Avengers Endgame: superhero film based on the Marvel Comics superhero team the Avengers

The film is produced by Marvel Studios and distributed by Walt Disney Studios Motion Pictures.

Endgame is the direct sequel to Avengers: Infinity War and the 22nd film in the Marvel Cinematic Universe (MCU). Endgame was directed by Anthony and Joe Russo and written by Christopher Markus and Stephen McFeely.

Don Cheadle stars as James “Rhodey” Rhodes / War Machine. Cheadle talked about Rhodes’s belonging as an Avenger as “not so much straddling one foot in the military.” Cheadle said that now he is more on the side of The Avengers than he was ever before. The cast is  lead by Robert Downey Jr. as Tony Stark / Iron Man and Chris Evans as Steve Rogers / Captain America.

It is based on the Marvel Comics superhero team the Avengers. It is the sequel to The Avengers and Avengers: Age of Ultron and is the 19th film in the Marvel Cinematic Universe (MCU).

The Avengers and the Guardians of the Galaxy combine to stop Thanos from collecting the six all-powerful Infinity Stones to kill half of all life in the universe.