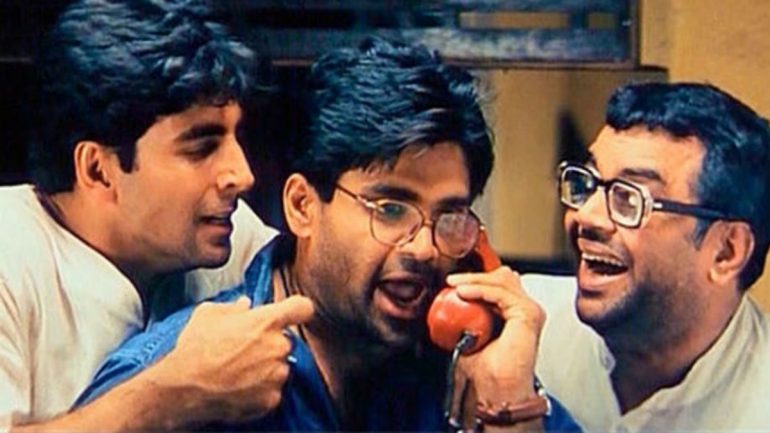 Get a glimpse of best classical comedy movies of all time.
Komal
Movies
January 10, 2021 3 min read

Best Classic Comedy Movies Of All Time To Watch in 2021

Some Classic comedy movies are a must at your worst time. It gives you the power to be joyful and relaxed in the hour of need. You can watch it wherever and whenever you feel like watching it.  You can always feel the compelling aura around humor or comedy movies. And as the famous proverb says ‘Laughter is the best medicine”, it emphasizes the happiness lost in the busy work schedule of today’s lives. So one should laugh and cheer himself when no one does for him. Here are all the best classic comedy movies to watch in 2020 to tickle your funny bones all over again.

Baburao Ram, Shyam, and Raju live a luxurious life in their own mansion with a royal car. Anuradha, a bank manager, promises Raju to double their money in 21 days. Raju borrows 30 lakhs from Shyam and Baburao and sells their bungalow for 30 lakhs without knowing the other two. He borrows 20 lakhs from a local goon Pappu to mark the crore figure. Later on, Anuradha turns out to be a fraud, and due to this fraud, they lose every luxury possession and leads a poor life. Pappu is tortured by his boss Tiwari Seth as he has borrowed the money from him. Later Pappu finds the trio and hands it over to Tiwari Seth, and he gives a deadline to return the money.

Will the trio be able to return the money?

Pandit Shaadiram Gharjore is a village matchmaker. He takes a guy family to Hosyaarchand and gets insulted by him. Hosyarchand demands for a guy whose worth is 40 times greater than him. Pandit takes this on his ego and suddenly meets Raju on railway tracks. Raju falls in love with the Hosyaarchand before Pandit shows the picture of that girl. Pandit convinces him to pretend to be the richest man in Asia. Later Raju successfully marries the daughter, and the deception takes forward in some humorous twists.

For more, watch Coolie No 1.

Amar and Prem are two rivals who belong to middle-class families and have no career goals. Both wanted to be rich, so they took their own paths to become rich as soon as possible. Both find an advertisement in the paper that Raveena, who is an actress, wants to marry. Amar enters Raveena’s house, pretending to be an amnesia patient, and Prem becomes a doctor to treat Amar. Raveena housemaid falls in love with Prem. The twin brother Teja of Raveena’s father makes consecutive plans to kill Amar and Prem but fails abruptly every time.

Farhan and Raju find from their biggest college rival Chatur that their missing friend Rancho has been traced. The trio starts their journey to find him, where the flashback reveals Raju and Farhan were Engineering students, and Racho always believes that a student should be capable and therefore should not run after CV. Chatur always finds a competition between himself and Rancho, while the ideology of the college director always differs. Rancho falls in love with the college director’s daughter. Things were going fine for them when they reached Rancho’s house, finding that his father has passed away. And also, the person who claims Rancho is someone else.

PK is a stranger in the city who asks questions that no one has asked before. They are innocent, child-like, but they bring about catastrophic answers. The story starts when PK, a human-like alien from a distant civilization, arrives on the Earth to conduct research on his people. Within a few minutes of arrival, his remote control to his spaceship gets stolen. He goes to find the remote in the completely alienated world. The only unanimous answer that people have for him is that the only answer lies with god. Then he made a mission to find god and came across different religions. Will he ever finds god?

For more: Best horror movies to stream on Netflix this Christmas and New Year.