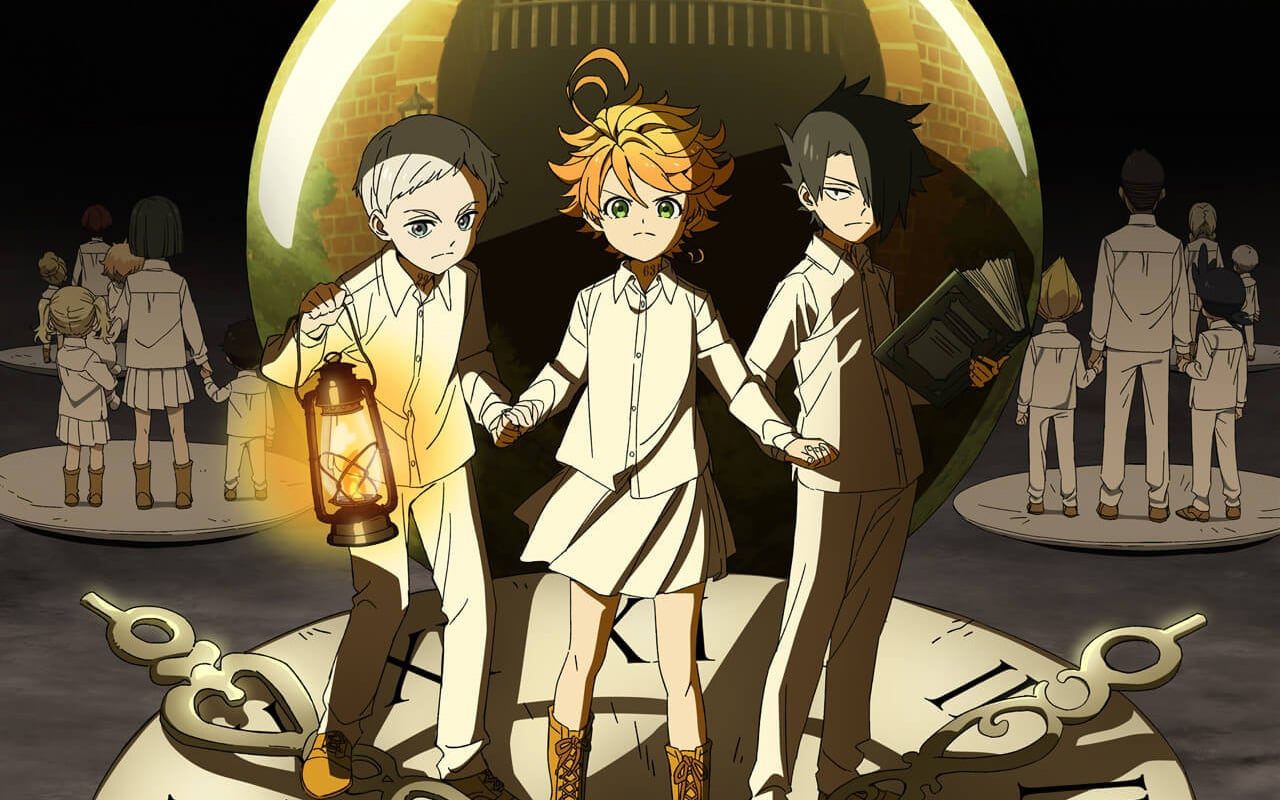 The Promised Neverland is a popular anime series based on the manga of the same name. Kaiu Shirai is the writer of the original story, and Posuka Demizu is the illustrator of the manga. The manga first serialized in Shueisha’s Weekly Shonen Jump on 1 August 2016. It finally concluded with its 20th volume on 15 June 2020. CloverWorks studio announced the anime adaptation of the manga on 28 May 2018. The show is popular due to its unique mystery and thriller elements. Even though there isn’t any anime series that are similar to The Promised Neverland in terms of its plot; we can find a few that follow the basic theme of the anime.

The first season premiered on 10 January 2019 and concluded with its twelfth episode on 29 March 2019. The sequel to the is currently ongoing since 8 January 2021. The series follows the story of a group of orphaned children who live like a family along with their caretaker, whom they call “Mom”. However, after finding out the truth behind the orphanage and the fate of the children who were adopted by families, Emma, Ray, and Norman struggle to escape from there along with the rest of their siblings.

The world is filled with demons, and the orphanage is a farm where they nurture children to provide food for the demons. The story is set in the year 2045. By then, over a thousand years had passed since the agreement called “The Promise” was made to end a long war between humans and demons. The Promised Neverland is considered one of the best anime of the decade. Here, we will look at the 5 most popular mystery anime similar to The Promised Neverland. 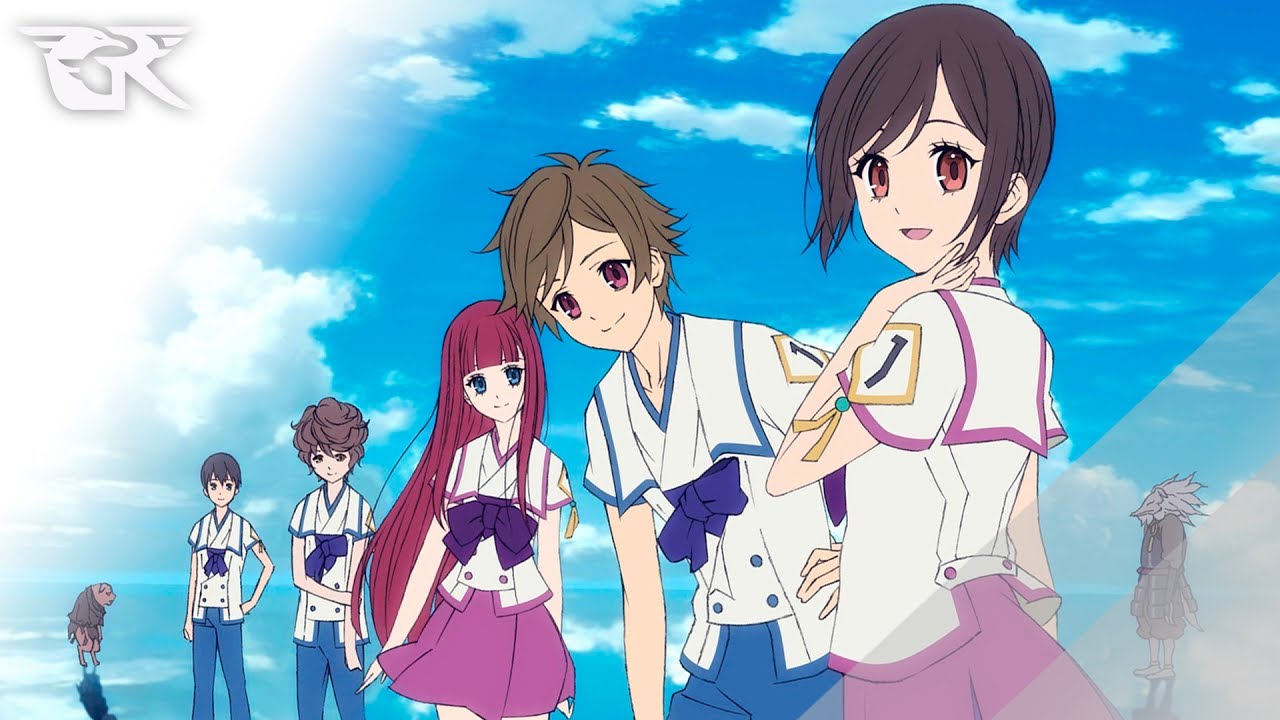 The anime is similar to The Promised Neverland in terms of its futuristic setting and unusual plot. Similarly, From the New World also shows a happy childhood, which is only a facade behind a terrible truth. The unexpected plot twists in the anime will keep you at the edge of your seat till the last moment of the last episode. The anime follows a futuristic world, 1000 years after the modern era. During that time, 0.3 percent of the population developed psychic abilities, namely “Canto”.

These abilities give rise to violent tendencies, causing wars that led to the downfall of modern society. Eventually, the psychic endowed humans established a pacifistic society by making themselves incapable of violence against their fellow humans by implementing Attack Inhibition and Death Feedback. It would activate if a person kills another human,  causing that person’s organs to break down.

The series follows 12-year-old Saki Watanabe, whose powers awakened later than her friends. She joins Sage Academy, a special school for psychics. However, unknown to everyone, the village government monitors and evaluates their every move. With the help of these evaluations, they remove certain students for their poor performance or cheating. The other students have their memories about that student completely erased. During an unsupervised camping trip, Saki and her friends discover an ancient library robot that tells them the dreadful truth that gave rise to this current era. 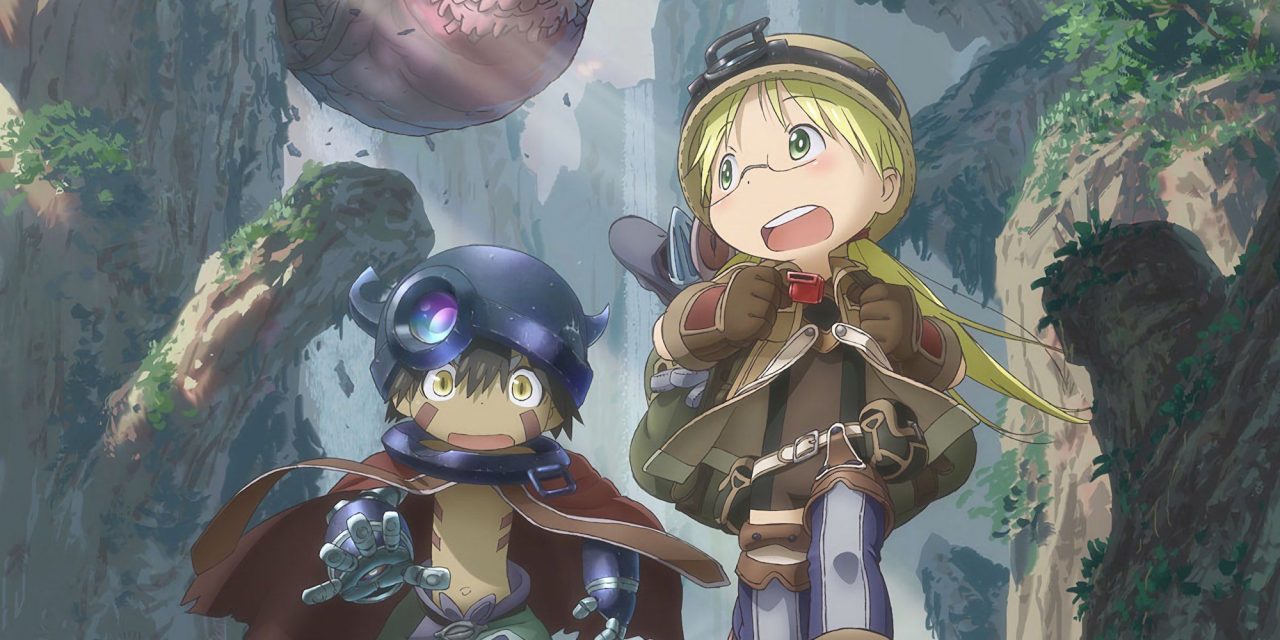 Both anime share the setting of an orphanage and being isolated from the outside world. Made in Abyss also have little kids as protagonists. Similar to The Promised Neverland, this anime also changes from a vibrant to a dark setting. The series follows an orphaned 12-year-old girl Riko who lives in an orphanage in a town that surrounds a strange, giant hole that goes deep into the Earth, which is commonly called the “Abyss”.

The Abyss consists of artifacts and remnants of a long-gone civilization. It is a popular hunting spot for the cave raiders who call themselves “White Whistle”. The task is hazardous, and it only increases as they go deeper into the misty pit. One of the raiders was Riko’s mother, Lyza. Riko dreams of becoming a White Whistle, just like her mother.

She finds and befriends a robot named Reg. One day, Riko finds a ballon that surfaced from the depths of the Abyss. It contains pages of Lyza’s discoveries and a message from her that she is waiting for Riko at the bottom of the Abyss. Riko bids farewell to her friends and descends to the Abyss with Reg as her companion. 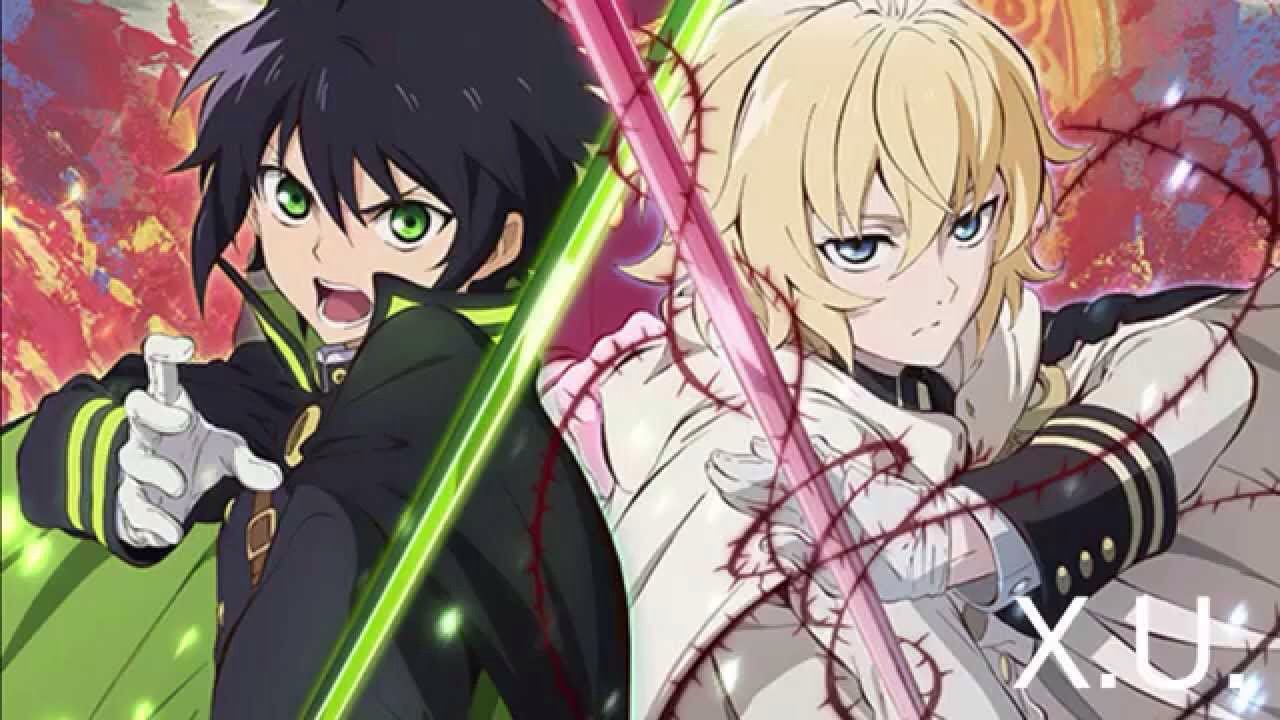 This anime is also about children being raised as live-stock for man-eating creatures. In the year 2012, the world comes to an end at the hands of a man-made virus. The virus ravages the global population, leaving children under the age of thirteen untouched. At that time, the vampires emerge from the recesses of the earth, likely to be followed by age-old horrors of the dark, which was only a myth.

The vampires claim the Earth in a single violent stroke and subjugate the remaining population. They let him live beneath the surface of safety at the price of donating blood to their captors. However, the people are unaware that they are vampires. The story follows 12-year-old Yuichiro and his friend Mikaela. The two plot to escape along with the children in Hyakuya Orphanage. Unfortunately, this results in the deaths of the children.

Mikaela sacrifices herself to let Yuichiro escape and be saved by the members of an extermination unit of the Japanese Imperial Demon Army, the Moon Demon Company. Four years later, Yuichiro seeks revenge against the vampires and vows to destroy them. However, the series reveals that Mikaela is still alive and wants to find Yuichiro. 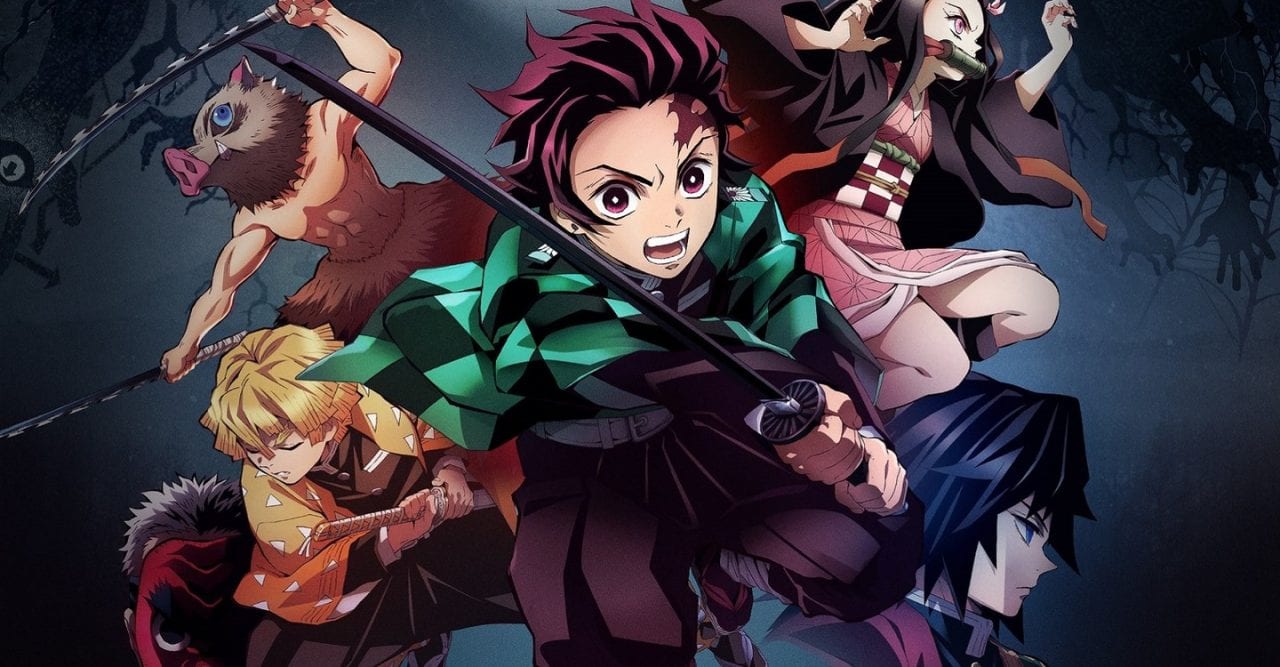 Both anime have man-eating demons and children fighting to survive. Like The Promised Neverland, this anime also features a drastic plot twist in the first episode. The series takes place in Taisho-era Japan and follows Tanjiro Kamado and his sister Nezuko. After an attack from a demon, Tanjiro’s whole family is killed, and Nezuko transforms into a demon. They encounter a Demon Slayer named Giyuu Tomioka who wants to kill Nezuko.

However, after seeing that Nezuko isn’t a mindless killer and wishes to save her brother even after starving for human blood, he decides to help them. Giyuu informs them about Urokodaki, who will teach Tanjiro to fight demons that will help him find a way to cure his sister. Tanjiro sets out to find Urokodaki with his sister.

There, he goes through intense training to enhance his physical techniques and learn “Breathing Styles” that help the Demon Slayers fight at a superhuman level. After learning everything, he takes a test to become a full-fledged member of the Demon Slayer Corps. The siblings continue to travel in hopes of finding a cure and fighting powerful demons along the way. 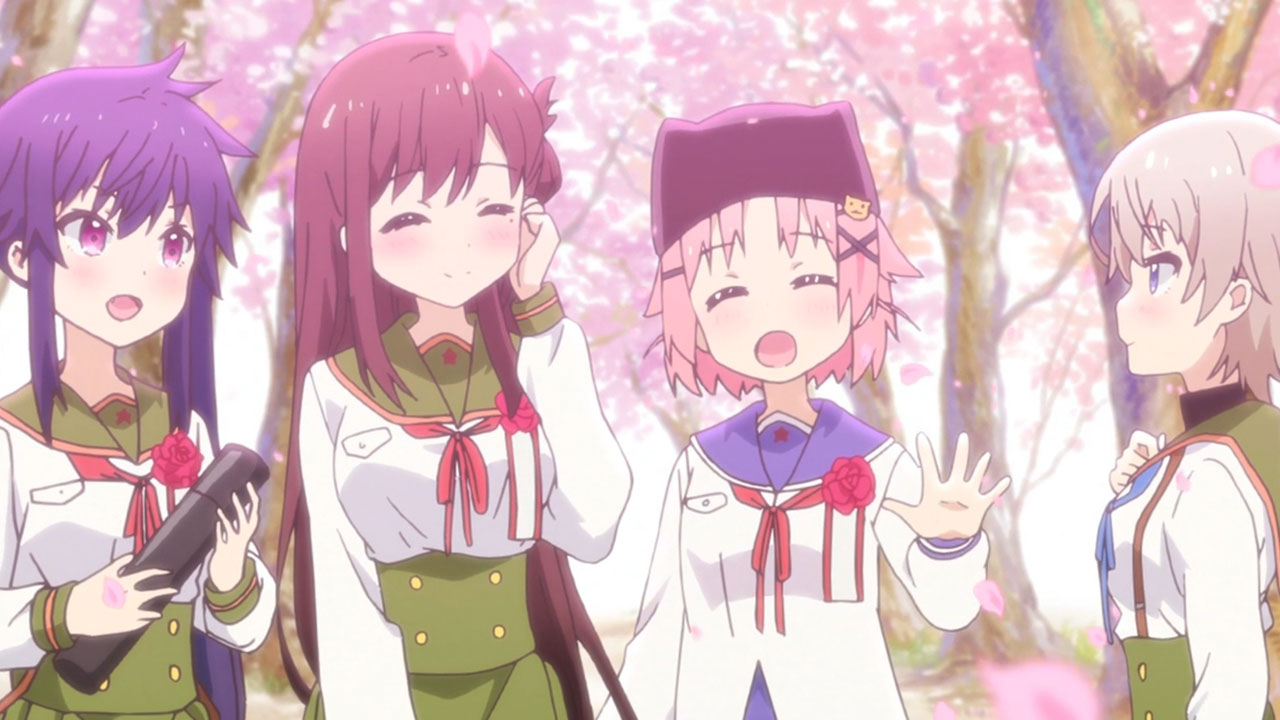 Similar to The Promised Neverland, this anime also has a plot twist at the end of the first episode. They both feature horror elements and share similar art styles. The story follows Yuki Takeya, a cheerful high school girl who lives at Megurigaoka Private High School. She spends time with the School Living Club alongside fellow members Kurumi Ebisuzawa and Yuuri Wakasa. However, after some time, a zombie outbreak overruns the city, which spreads to the school.

Many teachers and students are infected. Yuki’s classmates struggle to keep her safe while she goes out to indulge in fun activities. It is revealed that Yuki is a delusional girl who believes everything is normal around her and her teachers are alive and well. This was due to the result of a mental breakdown after the zombie outbreak. She subconsciously creates her delusions of the normal school she loves so much.

Even after she realizes the current scenario, she still acts oblivious to everything. However, sometimes she panics on occasions when her delusions break down, and she sees the reality of the world. Yuki slowly comes to terms with reality and tries to be of more use to the group. One day, Yuki finds a hidden safe with her friends. It contains an emergency manual that reveals the school’s involvement with a biological weapon, constructed as a safe house in the event of an outbreak.