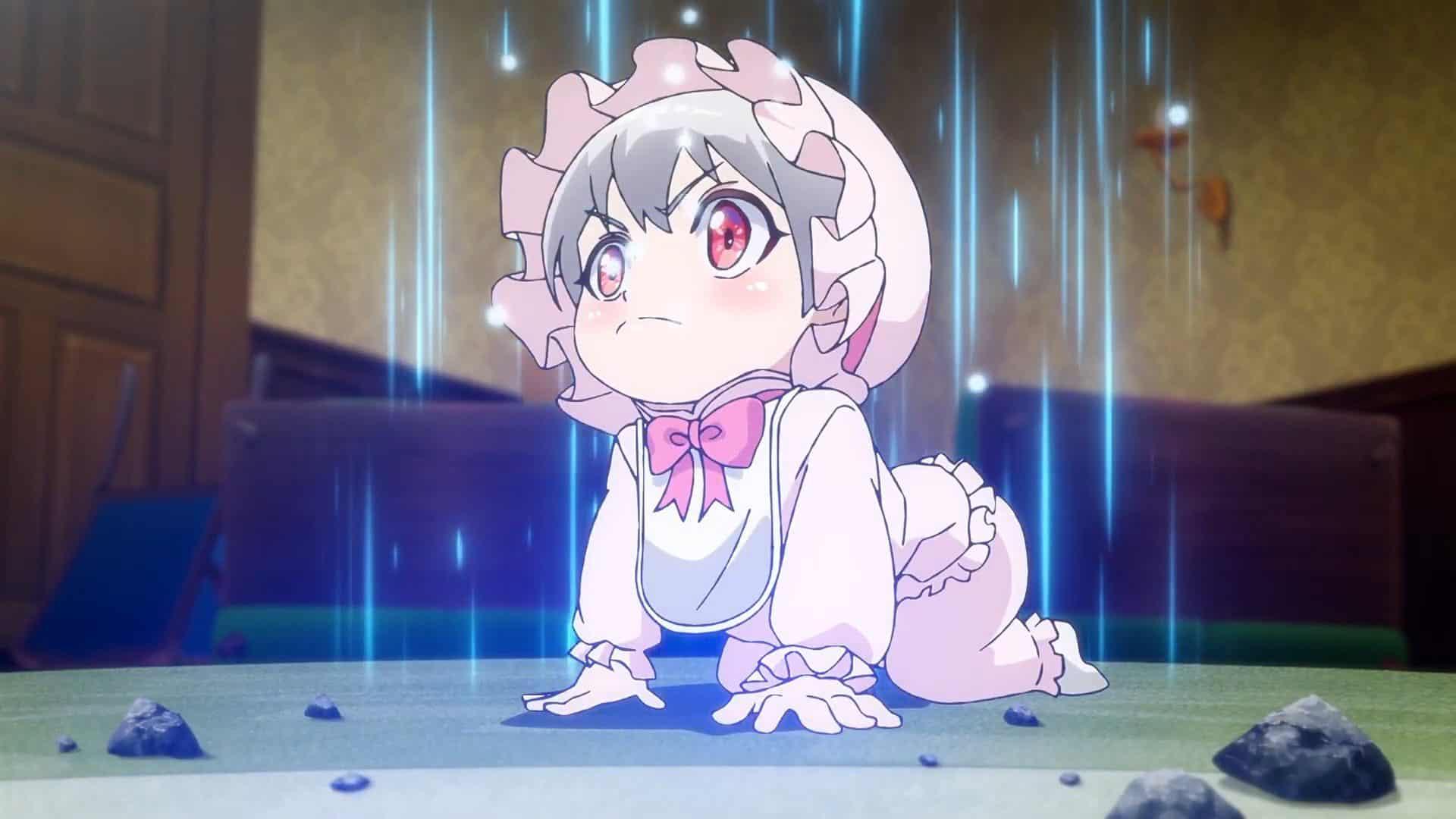 Excited for Reborn to Master the Blade: From Hero-King to Extraordinary Squire Episode 3? Every once in a while, it’s both fun and healthy to take a break from the more serious Isekai like Mushoku Tensei, Realist Hero, or Ascendance of a bookworm and enjoy some fun and silly manga, guilty pleasures if you will.

If you’re a fan of the Isekai genre like I am, you’ll enjoy this series. At the same time, if you enjoy Shonen battle anime, you’ll also enjoy this series. If you’re wanting an adorable romance or like seeing harems in your Isekai this might not be what you’re looking for.

Yes, I am talking about Reborn to Master the Blade: From Hero-King to Extraordinary Squire, quite a big name, right? The story is about a powerful King who, on his death bed gets his wish fulfilled to be reborn again. The twist is that he is reborn as a girl, but he still has his powers.

Reborn To Master The Blade: From Hero-King To Extraordinary Squire Episode Recap

Before diving into Fire Country Episode 3, let’s quickly do a recap of the previous Episode. The anime begins with this king on his deathbed, and he says to them, “Don’t be sad everyone. How can I rest in peace if I see such faces?” They say to him, “Your Majesty, Our people still need you, but that is fate”. And then the goddess Alistia appears to him and tells her, “I wish I could meet you one last time before my end”. 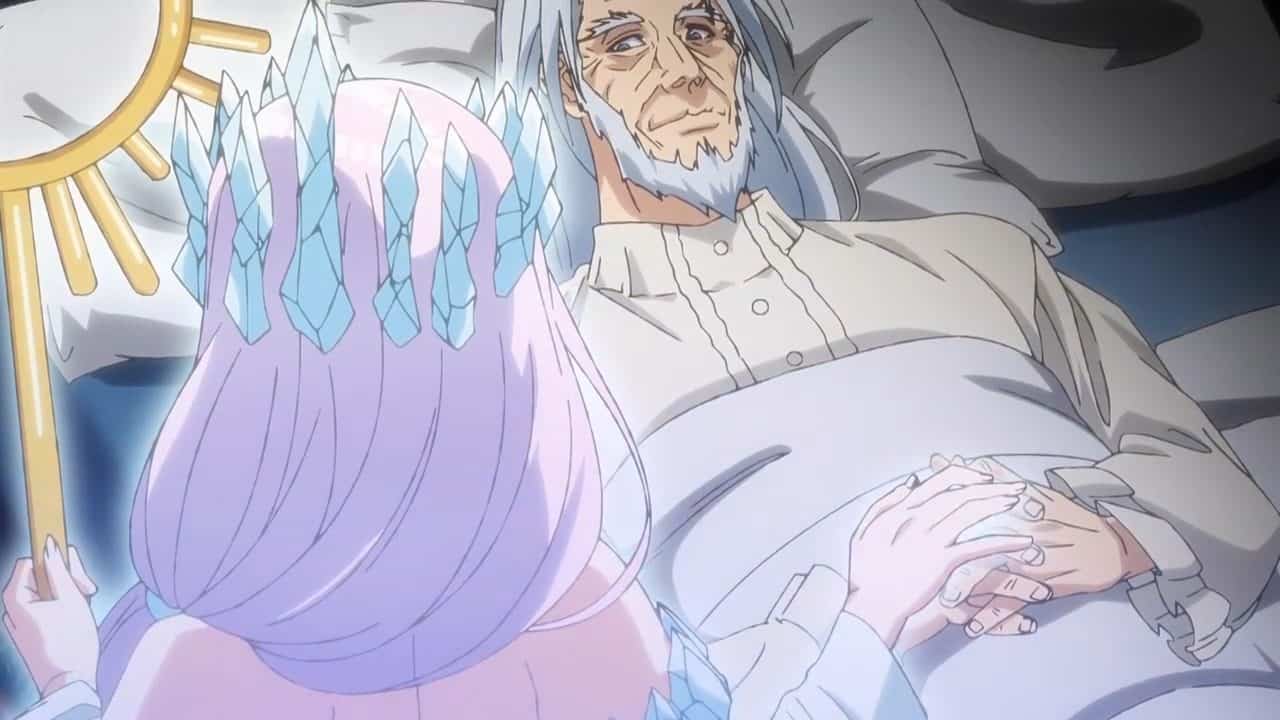 Alistia appears in front of The King

And he’s surprised when she says, “Thank you for all your hard work until today. You’ve really served people well. You defeated many demons and evil gods. Then you are known as Hero King because of your generous heart. My eyes did not deceive me when I chose to make you a divine knight. So I would now like to reward you for the great achievements you have achieved so far. Do you have any wishes? I will grant everything with my best.” And he tells her that he wishes he could be reborn again.

And then we see our hero really resurrected. But here was the shock, he reincarnated as a girl. And then we see Inglis as he says, “Even though I’m reborn, I still have the goddess blessing. I can feel the presence of the ether inside this body”. In this world. Ether is the origin of all things. Everything in this world is composed of ether. Manipulating it is the same as manipulating the world with our will. In other words, it is the power of the gods.

And then we find an attack on the city, and magical monsters appeared, attacking them from everywhere. And suddenly, his mother entered his room while he was floating, but she did not notice that, and she evacuated the place and told her, “Inglis, your father, and the others will get rid of the magical beast”. And he blinks and says to himself, what an interesting name.

A magical beast is an incredibly evil monster that deserves to be defeated. And we find them starting to evacuate the castle, and the mother says that we must wait here until the Knights can expel the magical beast away. Then he sees the beast from the window and says, “Is this the magical beast? The color of this gemstone varies according to the individual. This world seems to be getting dangerous, but it is for me. I can’t wait to test my skill”. 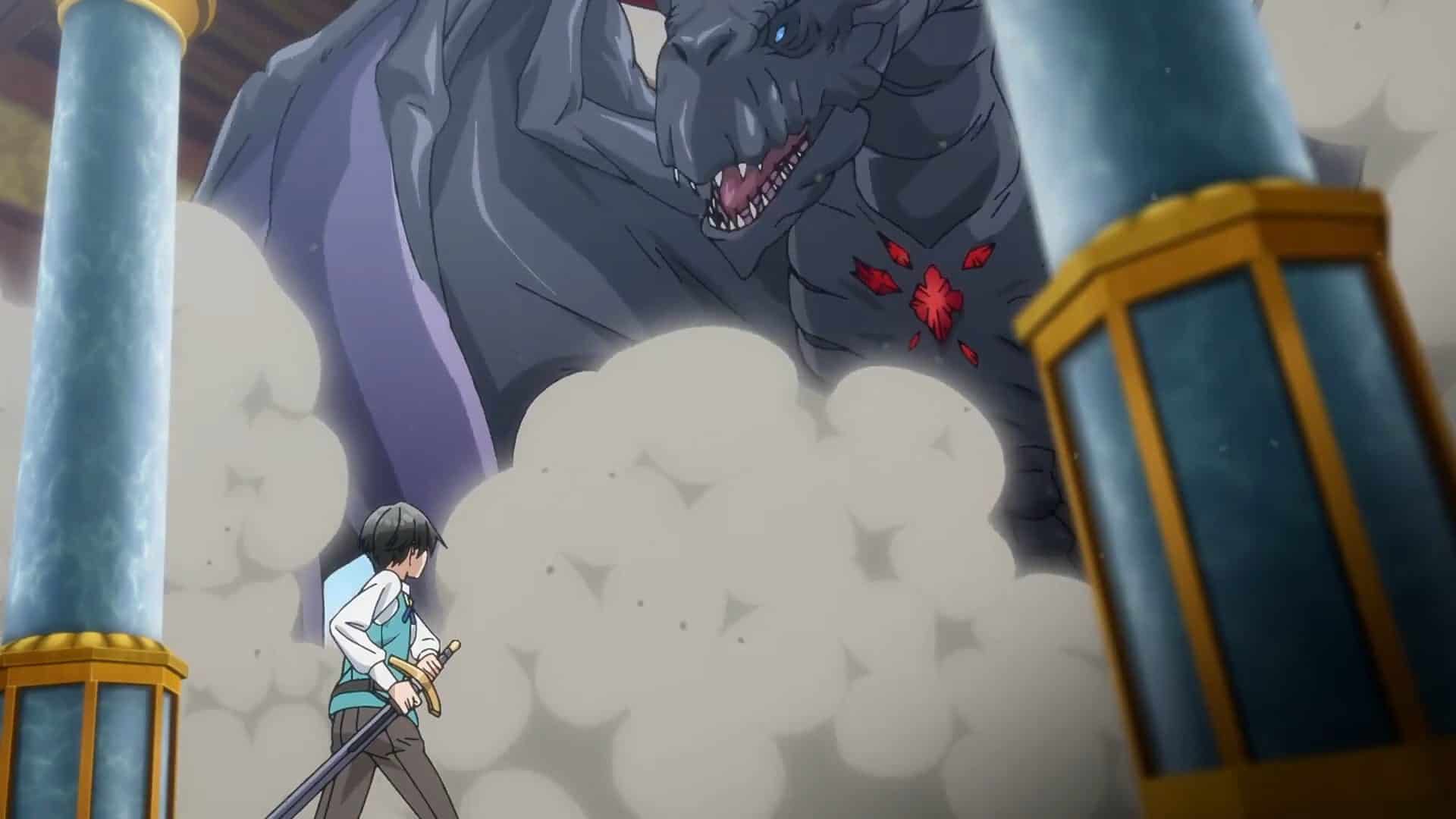 He then feigns fear and says to himself. For the sake of these children’s future, “I hope the world will reach a point where there is no magical beast. I’ve already received a Talisman, and I’m just watching”. Suddenly the magical beast attacks them, and its mother says, “Take Angelus and Ravinia and run away”.

His mother tries to fight the monster, but the monster is incredibly strong. After that, he comes back to her and tries to help her and says, “Inglis this is the spirit. The hero is not a title that people tell you. It is earned by your will and actions, and thus you deserve the right to be called a hero”. But the monster is strong and is able to overcome them and knock them unconscious.

Then Inglis intervenes and begins to create his powerful magic and notices that Chris is still awake. So Inglis hopes that he will think of what he saw as just a dream or an illusion. Inglis kills the monster and then feigns unconsciousness.

Inglis At The Age Of Five

At this time, Inglis and his sister go to training. And then we see Raphael, 13 years old, the eldest son of the Duke of Belfort. Classy, serious, and hard-working older brother, and his talent is amazing. Then find him winning over his opponent and telling him this guy is an amazing Big Brother. The only person in the Knights who can defeat him now is the captain. 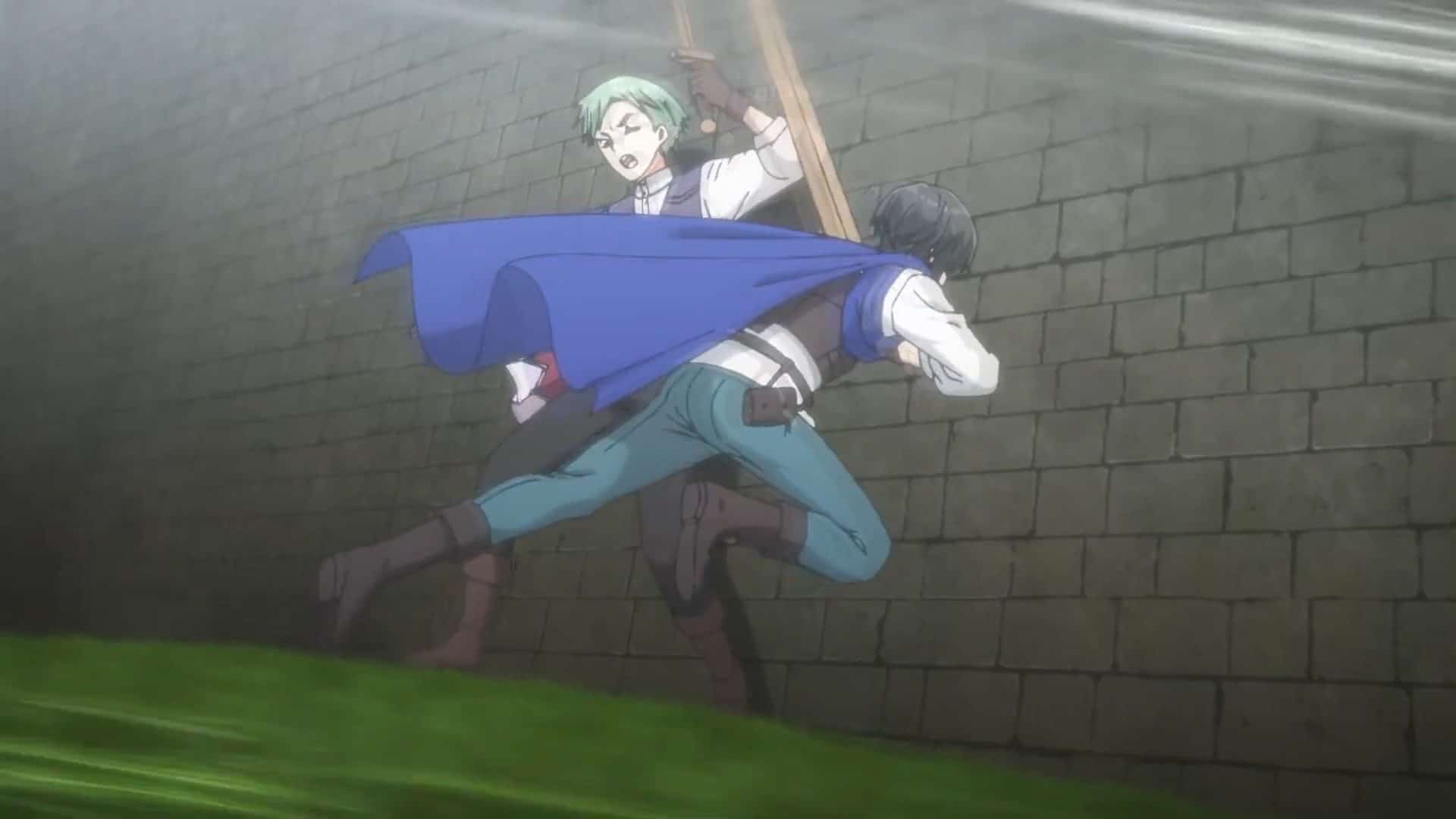 And we find this man and his son go to them, and his son begins to introduce himself and says his name is Raw. It seems that he is the same age as young master Raphael. We find that this person quickly defeated ten soldiers. We find him suddenly becoming arrogant, and he finally shows his true self.

Then Inglis says that by using mana as a source, which is the sub-link of the ether, you can create a certain supernatural phenomenon by manipulating mana. This is what we call magic. Binding magic restricts the opponents’ movement in his field of vision, but his skill is still shabby. The effect only slows the opponent’s movement.

Then Inglis says, “To think that no one would notice, it seems that people of this age have left behind their knowledge and sense of magic”. And Raphael tells him that he will be his next sparring partner.

Inglis tells him that he thinks it would be better to fight without looking at him as much as possible, there is something strange, everyone’s movement is getting slow”. On the other hand, Raw always has the right timing to take on an opponent, wondering if there must be some kind of trick.

Rafael is ahead of him, defeats him in the end, and says, “I expect nothing less from the future Holy knight. You are different from the Knight. And then Inglis says she would like to try and avenge her Big Brother, but he tells her to go play with her dolls or something like that.

After the fight, Inglis says to Raw in a low voice, “You wouldn’t mind if I revealed what you’ve been doing in secret”. Inglis tells her brother that she wants to fight the boy, and after a discussion, he allows her to do so. And Inglis says the ether in my body can naturally disperse this level of magic. If he use Ether, he would definitely win, but that wouldn’t be fun. So he fights with my pure swordsmanship. 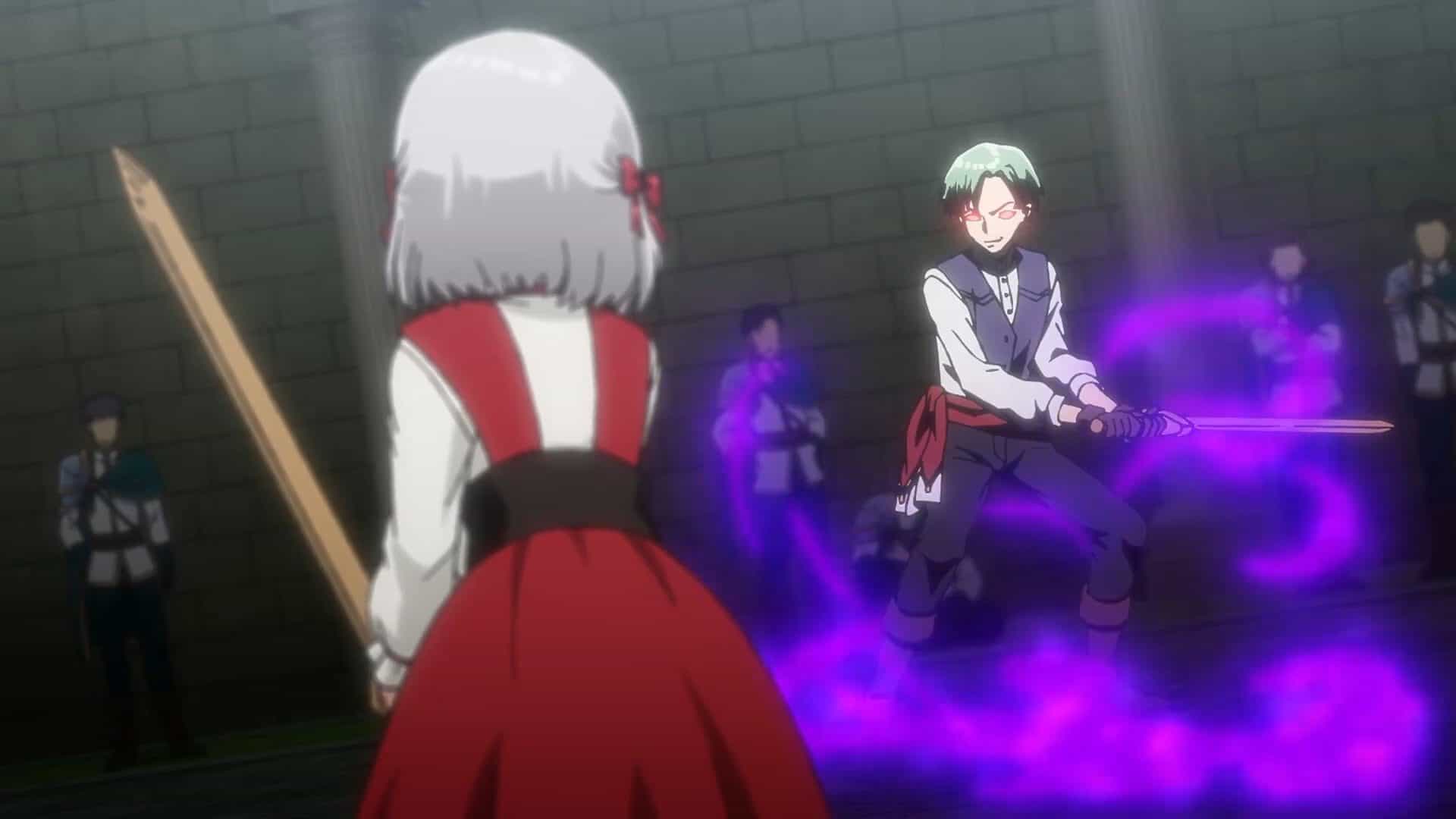 Inglis says that he could have done that when he was younger in his previous life. So this was a great opportunity to test his current skills in practice. And then Chris defeats him in one fell swoop. He says to himself that he would say his skills are acceptable for now, but it’s still not enough, and he needs to aim higher. Now we will discuss when will Episode 3 of Fire Country will release.

Reborn to Master the Blade: From Hero-King to Extraordinary Squire Episode 3 Release Date

Reborn to Master the Blade: From Hero-King to Extraordinary Squire Episode 3 will release on 24 January 2023 on TV Tokyo. At the time of writing, 12 episodes are scheduled for this season. This means there will be nine episodes after this week’s episode.

Reborn To Master The Blade: From Hero-King To Extraordinary Squire Episode 3 Release Time & Where To Watch

If you have TV Tokyo on your TV, you could just tune in at the time mentioned above. But, if you missed the episode while it was airing live or prefer the Streaming Reborn to Master the Blade: From Hero-King to Extraordinary Squire, then Streaming is also available. You can stream the show on Crunchyroll.