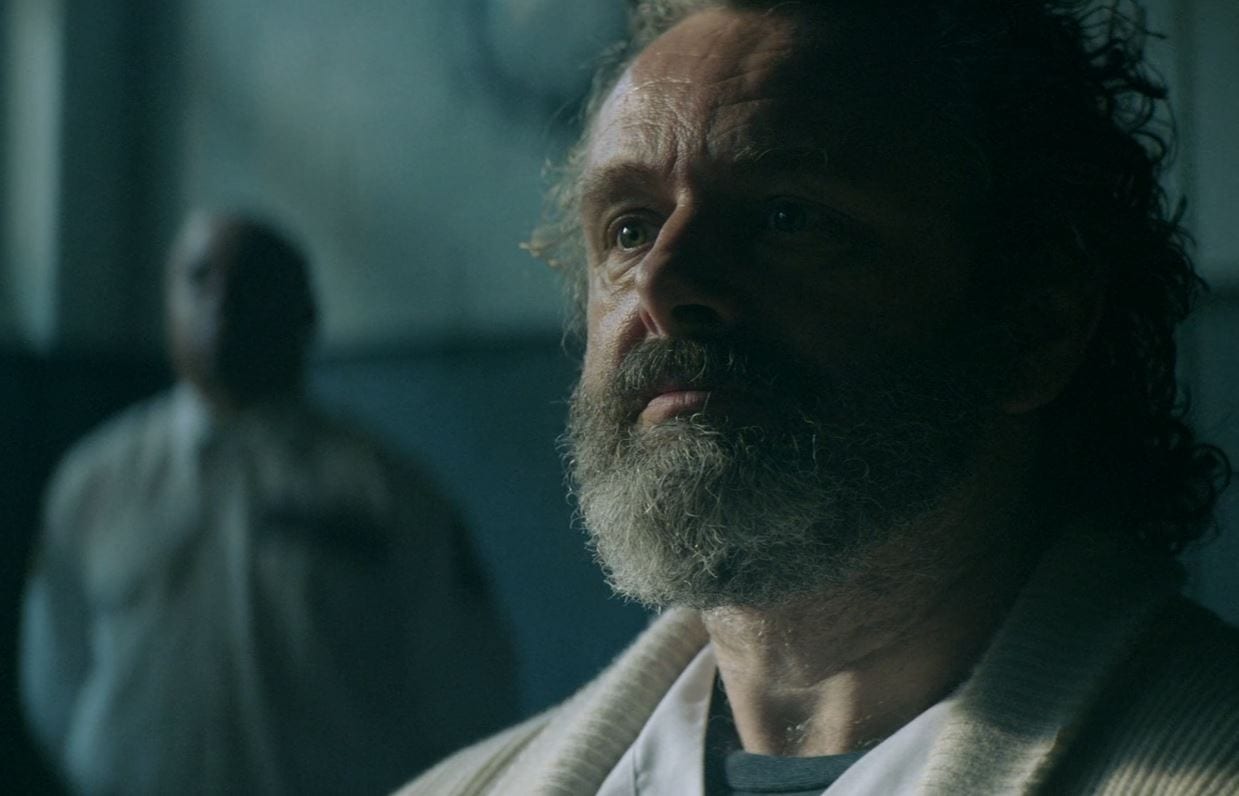 Prodigal Son season premiere started off by giving us much more insight into the relationship between Malcolm and Martin. We see Martin as his action start being driven by his guilt. He had saved his sister Ainsley from persecution for the murder of Endicott, while she seemingly seems to forget she had done so. Jessica and Gil’s relation is in turmoil as Jessica hears Gil and Dani’s conversation on how her family was cursed. Lastly, the episode had showcased racial profiling into the mix, which JT became the victim of.

This week’s Prodigal Son episode titled “Speak of the devil” pays homage to the old classic crime fiction. A killer is on the loose who seems to be possessed by a demon and has religious motivations. The episode takes a much psychological spin as the story progresses. This leads to Malcolm again seeking guidance from Martin, where we get introduced to a new recurring character in Friar Pete. This episode of Prodigal Son deals much with exorcism rituals, supernatural lore, rare medical diagnoses, and Catholic Church bylaws. And Malcolm and the team must find their way through to crack the case.

Martin attends his first group therapy after being transferred back to Claremont. On looking seemingly preoccupied, the therapist asks him what was on his mind. Martin confesses that he has been worried about his son Malcolm. There are things that trouble him, but he chooses to bury them. Meanwhile, Jessica is also worried about Malcolm as he had stopped visiting the therapist. Malcolm tries to brush off her concerns saying that it was just part of being a serial killer’s son. Jessica isn’t convinced as she invites him to a brunch with Ainsley. 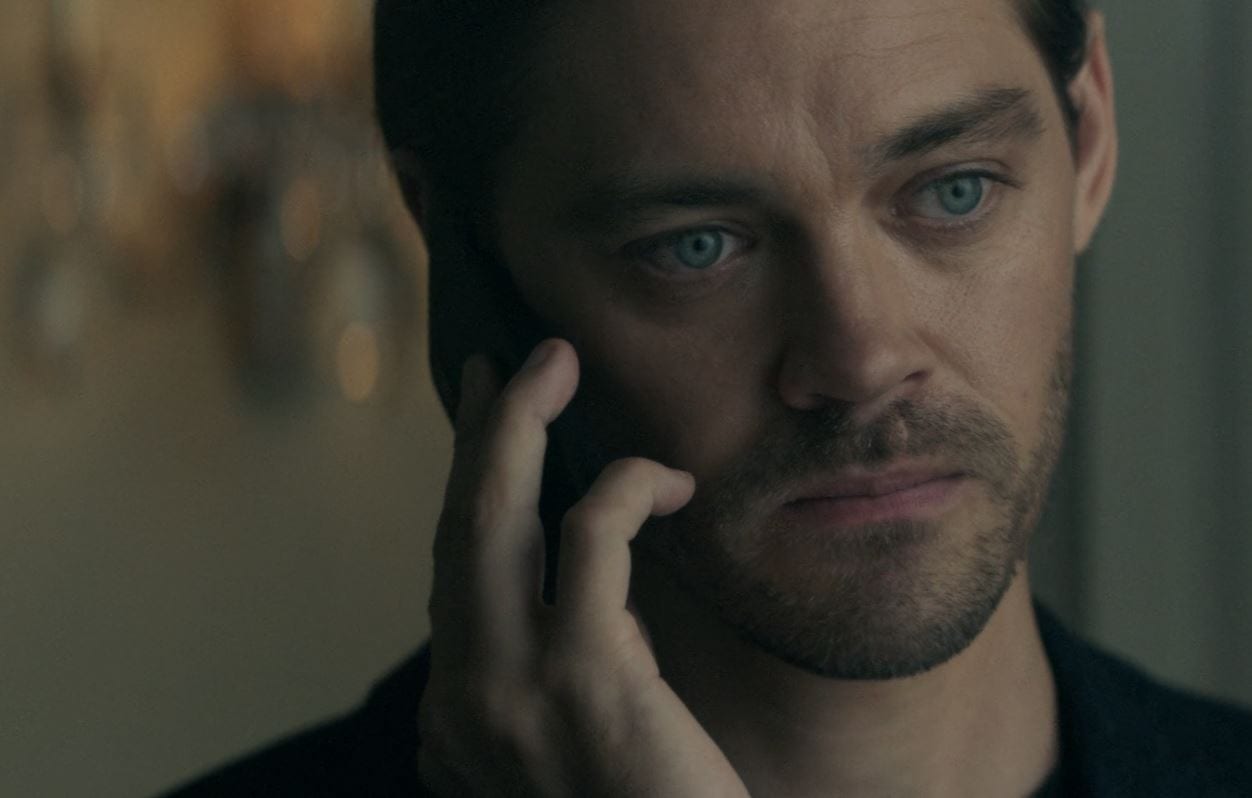 Malcolm is overwhelmed by his guilt.

Malcolm himself is worried that he is unable to recognize himself, overwhelmed by his guilt. And the only person he can talk to about his state is his dad, Martin. We again see a concerning element of Malcolm’s state after he learns of a field guide to surgery. This leads Malcolm to go visit Sister Agnes, but she suddenly imagines her as his sister, as he was dreaming.

This week’s Prodigal Son episode features the death of Father Reyes. His hanging body is left surrounded by holy water, a crucifix, and a copy of Rite of Exorcism. This brings Malcolm to the conclusion that Father Reyes performed Exorcisms. As Edrisa has the time of her life on the hydraulic lift examining the body, she sees that Reyes’ blood was used to draw a symbol. And thankfully, Sister Agnes, who found the body, could also decipher the Aramaic message to spell out Abaddon. Malcolm identifies it from the one in Book of Revelation fame, claiming that the killer was the Devil himself.

This is followed by law enforcement trying to do their job while Archbishop Argento obstructing it. Malcolm is a bit disturbed by the scenario but has to give in and play their game. Malcolm starts to profile the murderer as someone who may have possession disorder. The culprit here identifies themselves as a demon, which hardly seems to be the case. So, he comes to this conclusion, as this disorder makes one think that they have been possessed. Martin being a personal specialist in such a case, Malcolm decides to go to him for help. 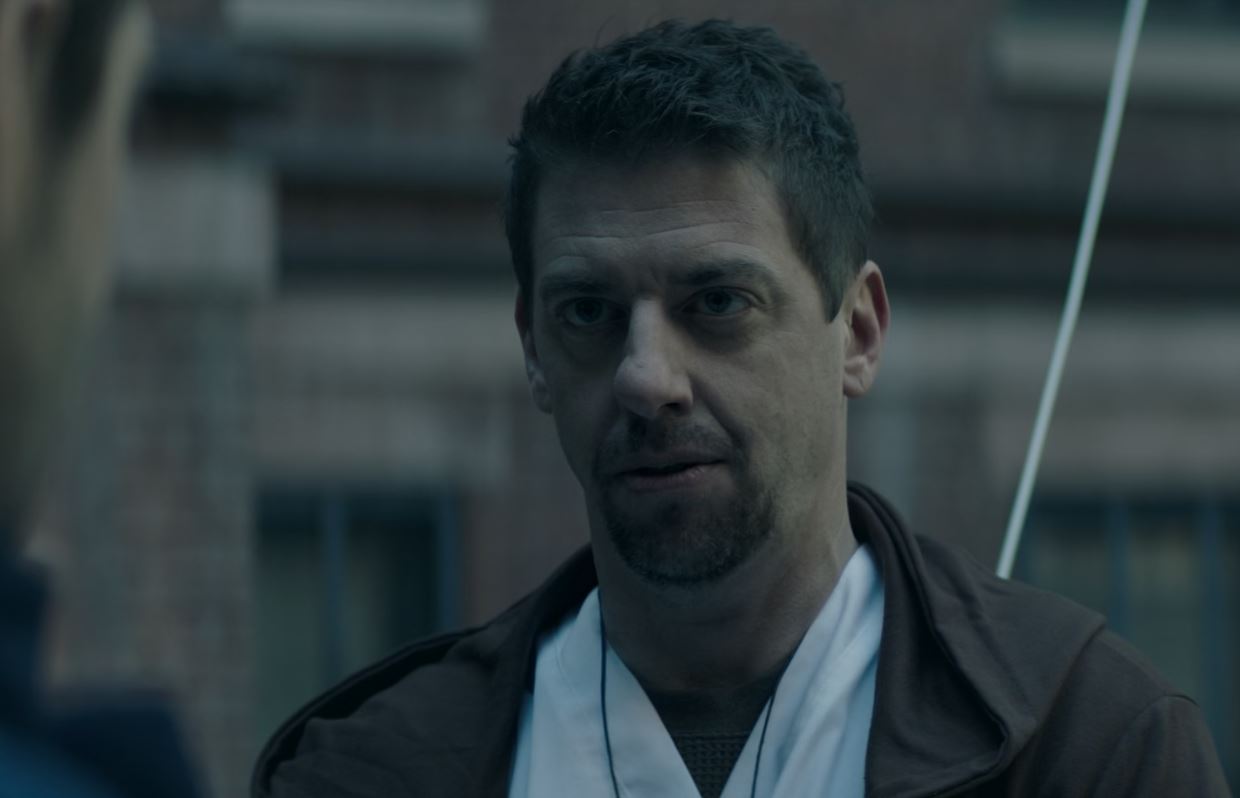 As Malcolm visits, Martin has brought in a consultant, Friar Pete. He was also a serial killer who went after his victims due to religious delusions. Malcolm explains the murder and how there were 44 precision cuts. Pete and Martin identify it as a field guide to surgery. Martin denies the possibility of someone from a medical background but soon decides to go with it. As we learn that Church law dictates, a doctor needs to sign off on any exorcisms performed. Thus Malcolm only needs to find the doctor who signed off on it instead of going through the church.

After retrieving the name from hospital records, Malcolm and JT go to a patient named Norman. Whose doctor referred him to Father Reyes as otherwise untreatable. Norman’s room had lines drawn all over which they were asked not to cross. But Malcolm doesn’t adhere to the instruction as he quite literally crosses the line to test out his theory. As he does, Norman goes crazy and even starts calling Malcolm, a killer just like him. Later back in the office, Gil and Dani believe that Norman must be the killer. But, Malcolm feels that isn’t the case as it had to be someone with steady hands, which couldn’t have been someone crazy like Norman.

Later, when Malcolm and Dani have a chat regarding Francisco Goya, it comes to his mind that the disorder may be due to lead poisoning. Francisco Goya was a painter who went absurd due to his work with lead paints. And therefore, they make a connection to Sister Agnes and Professor Shaw, who had been working on restoring old paintings. When they arrive in the church, Agnes was missing, who is later discovered tied up and gagged. Meanwhile, Shaw, who seems to have lost the plot, looks like the primary suspect. 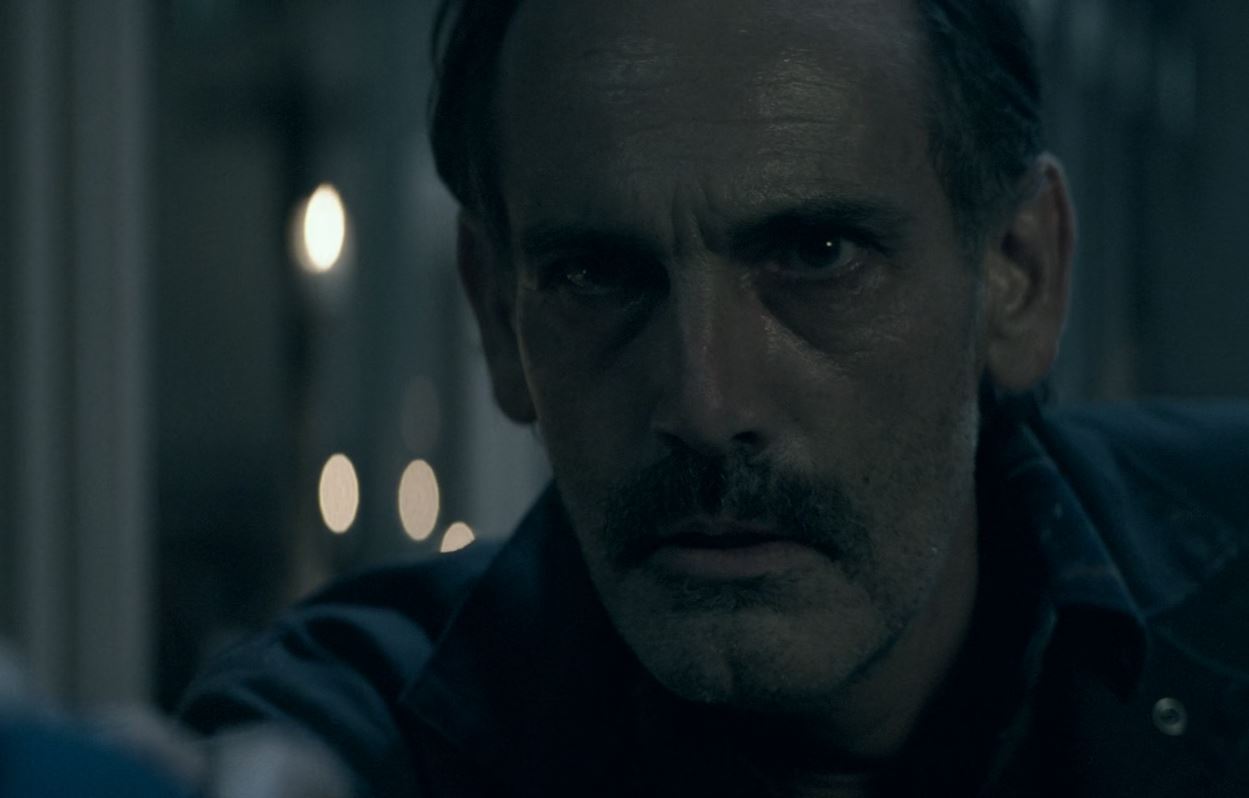 So, Malcolm calls up Martin, who was with Pete at the time. Martin, who had knowledge of lead poisoning, asks Malcolm to leave the room. But considering the room was locked, they must now exorcise Shaw. With instructions from Friar Pete, Malcolm chants to dispel the evil spirits away. And they must do this before Shaw, who believes himself to be Abaddon the Destroyer, is able to kill him. Shaw wasn’t actually possessed but considering he believed so leads to the ceremony being successful, which requires additional assistance from a knockout blow.

This Prodigal Son episode gives us some insights as to how Ainsley has registered the events from last season. She has completely forgotten the part where she stabs Endicott as she remembers the rest of it. This episode sees her try to deal with her mom, Jessica. Jessica herself was going through a tough time and was trying to bring the pain down by meddling herself with her kids. She had been ignoring Gil’s calls but finally decides to meet him and end things. As she believes that her family is cursed, which leads to Gil being injured. 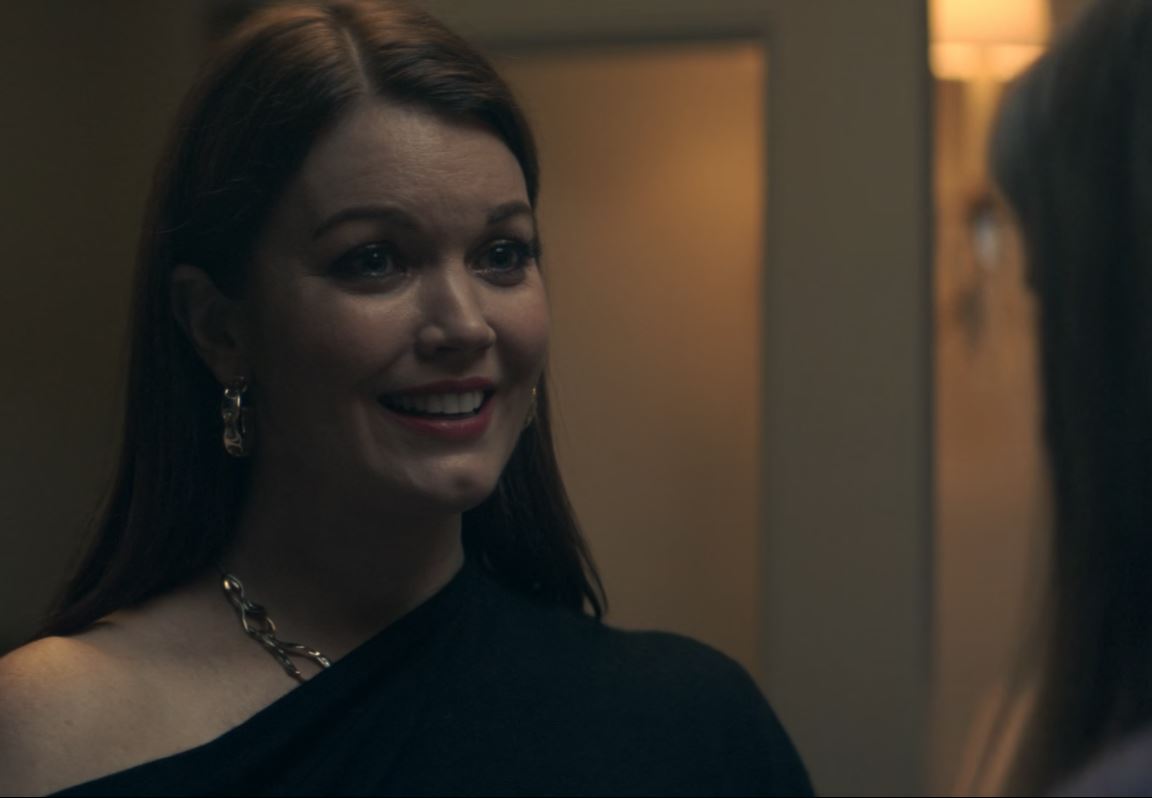 Jessica discusses her situation about Gil with Ainsley.

While we discuss subplots, we again follow up with the situation with JT. Where he was racially profiled and even almost killed by a few racist cops. He doubts as to what he must do, as taking action will only escalate things. But this situation again takes a turn when JT calls in for backup to police but is denied.

After the events with Shaw, Martin feels like he has come a bit closer to Malcolm. Technically, they have considering how Malcolm has finally started to come to terms that his father’s fragments exist within him. And accepting his ‘inheritance’ has only helped him isolate that part of him. This will only help him find it easier to keep that part away from him, thus shutting Martin out completely.

Martin wasn’t pleased to know of this as by the end of the episode, he wants to leave the prison. He confides in his new friend Pete who suggests him to join him in his Exodus. 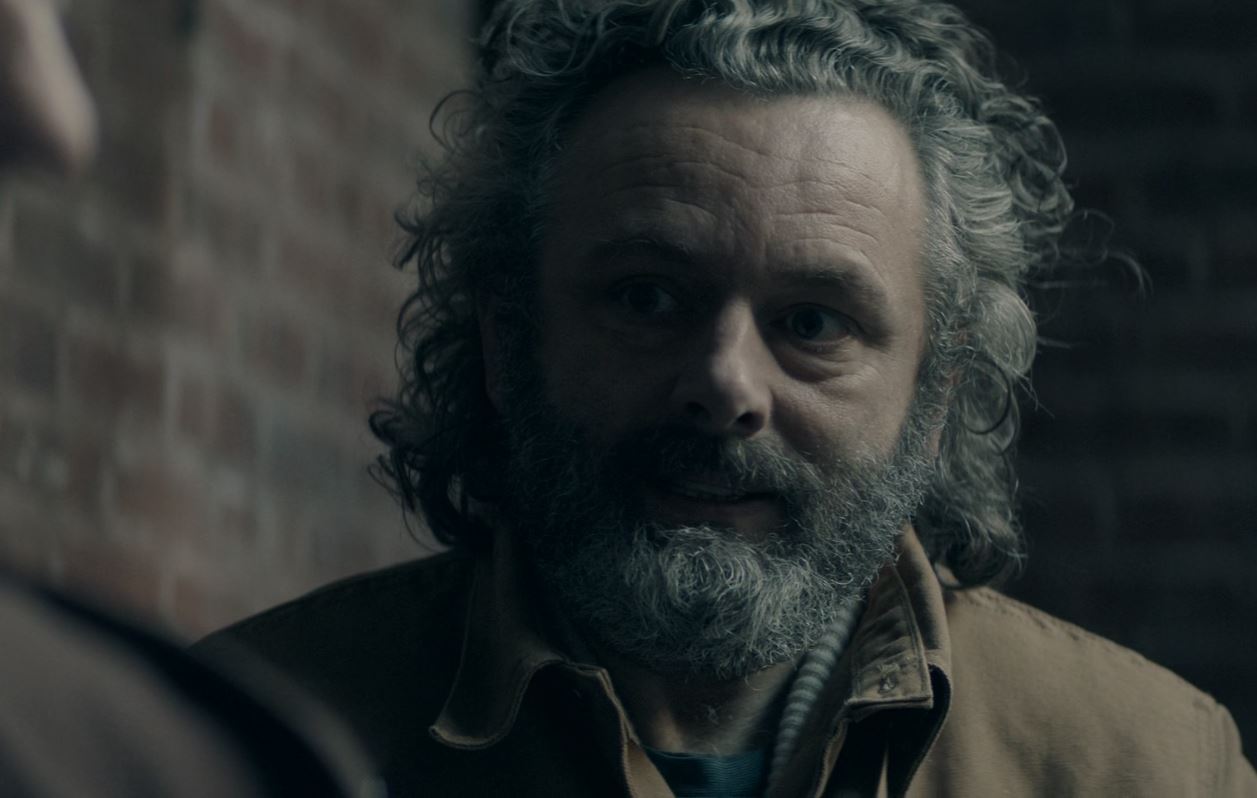 Martin, on Pete’s recommendation, considers going on an Exodus.

Overall, episode 2 of Prodigal Son was decent, if not less. The case in itself was quite interesting, taking elements from history and mythology. The connections made were quite intriguing and makes us question, how do they even come up with this stuff? The information we are provided with gives us a different perspective on how churches or even the medical field even works. And we find a relation between the two fields and how they coincide with one another.

Malcolm’s relationship with Martin seems to have developed to a point where Malcolm could finally let go of his father’s grasp. While Martin himself isn’t willing to give up, even saying that his children had never made him prouder. This is referring to the fact that both had shown criminal tendencies. So, we can say the story on that part is developing well.

The part of the story which is hard for one to digest is with JT. As much as an important topic for discussion Police Brutality and racism is, the show simply isn’t doing a good job portraying it. The sequence is completely random and clearly feels forced in later by some executives. This brings down the quality of the show as one feels like the characters themselves aren’t being given justice. Dani, who was so adamant about knowing what was going on with Malcolm in the last episode, is barely relevant in this one. And while they completely forget to mention the pandemic in this episode, Dani is only used to give a commentary on Racism cops. They must soon fix this, or the show’s ratings are soon bound to go down.

You can watch all episodes of Prodigal Son on Amazon Prime Video and Fox.