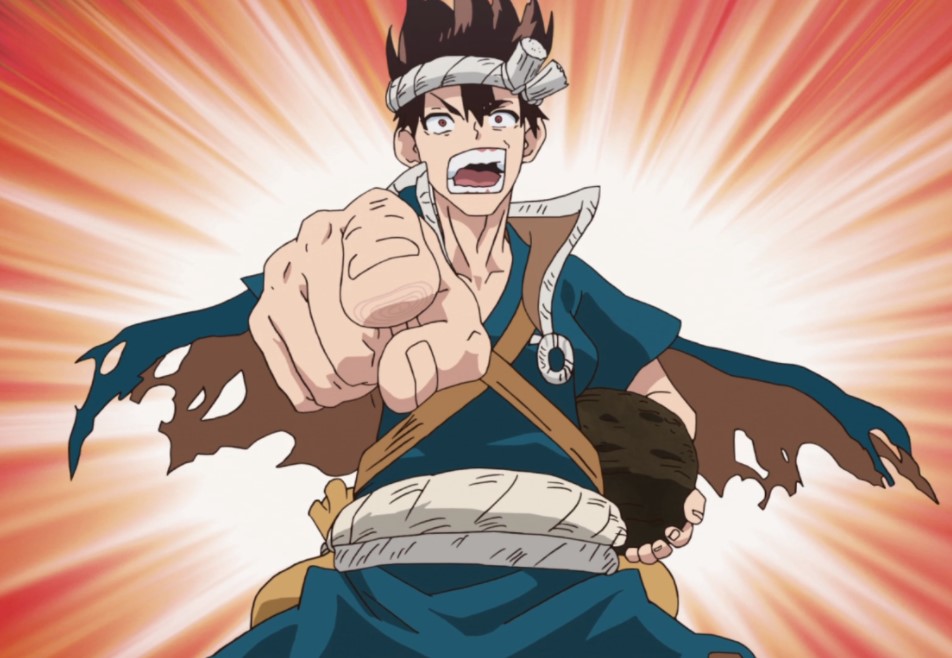 The brigade scientist crew celebrates as they got more diamonds and comments that it is a holy land of rocks. Ryusui comments that it is a stone sanctuary since he can see them and smell them. He glad they find the rare metals and rocks they need for their rocket. While at the other hand, Chelsea is working on some when Ryusui, Chrome, and Sika celebrate. Chrome and Suika joined Chelsea and commented on the diamond she is cleaning.

Gen came and narrated the story of humanity, but Kohaku is not interesting. Gen comments that he doesn’t know how to spell the word science, but he knows science. Kohaku is sitting on a tree watching others, talking about science. She realizes that humanity has managed to survive off the resources of the earth. For the past few thousand years ago humanity has acquired knowledge. Taiju comments that Kohaku is right.

The scientist decided that it is time for them to build a superalloy city. Kohaku Taiju started working together, cutting the branches of a tree. Gen is wondering why they are constructing the fortified stronghold. Senku looks at Gen and comments that it is for the final clash with Stanley. Suka questions herself if the Stanley gang still chases them until they capture them. She wonders if the villain gang has found out about their location.

Luna comments that she is not scared of the villain gang, but they have to be careful. Senku suspects that Dr. Xeno might have done something about their radio wave that might cause Stanley and others to find their location. He has noticed that Xeno’s claws were slightly magnetized. Senku confronted Xeno and told him that he had changed their time table. Xeno realizes that Senku’s crew is trying to lure Stanley Gang here, and he comments that they won’t face problems.

Ryusui laughed and said their plan is to get the ship. He realizes that their next plan is to cross the Atlantic as they travel around. They need proper seafaring vessels again, and Senku thinks that Stanley’s gang is the only option. He realizes that Stan is after their heads and retrieves his boss Xeno. Senku thinks that they will defeat Stanley and reclaim the Perseus. Both sides had their own issues with each crew member, and they want to settle some scores.

Two guys whore shot by Stan earlier ask each other about the battle, and they are worried that their wounds have not healed yet. They realize that the crew is left with few fighters such as Kohaku, Ukkyo, and Max. They think it will be a tough battle since they will face fully equipped American Military Elites. Their only hope lies in the Medusa Machine Gun and diamonds. Meanwhile, Chrome is setting traps for Stanley gan.

Gen teases Chrome that he is throwing Medusa-like; it won’t cut it against Stanley’s gang. Hyoga smiles stating that the crew will be shot before the enemies reach close range. Taiju is impressed by Cromes’s Medusa traps, and Chrome asks him how it is. Kohaku advises Chrome to prepare more traps for their safety. His traps almost got one of the animals killed. Hyoga comments that their strategy is base on the quantity of the traps.

Hyoga comments that they need fresh diamonds to be reactive to the Medusa devices. Senku told the crew that the water wheel would help them to polish the diamonds. Ukyo told Saseki that the machinery will stay hidden underwater. Kaseki is worried that he is opening the Medusa while breaking some. Kohaku comments that it is not good since they have to replace the tiny diamond. Ukyo comments that the pro watch technician Joel is facing troubles with the Medusa.

Ukyo put a Medusa in his arrow and shoots to the sky. That makes Senku and others happy, seeing that their weapons have been improved. Chrome realizes that they have to know where the Stanley gang will be attacking from. He yells that he has a bright idea since there is only one Medusa. Taiju decided that he will be the one running with the Medusa, and bullets won’t stop him. He comments that he is glad that they revived him.

Chrome realizes that it is a Pseudo Suicide, and he comments that they will all get petrified. The moment Stanly shows up three thousand-meter one second, one of them will be hidden far away, and everything will be over. Ryusui reveals how they are going to carry out their plan. He thinks that Stan will try to get the device for himself, and Senku said it could be a problem, but science can solve it.

The crew has now established the fort Medusa. Senku reveals how they are going to work on the speaker and mics on the watchtower. Senku comments that the Calamity that almost wiped out humanity is now their personal guardian deity. The new chapter of Dr.Stone can be accessed officially on VIZ Media and Shueisha’s Manga plus. For those who missed the last chapter updates they can get them here: Dr. Stone Chapter 184.