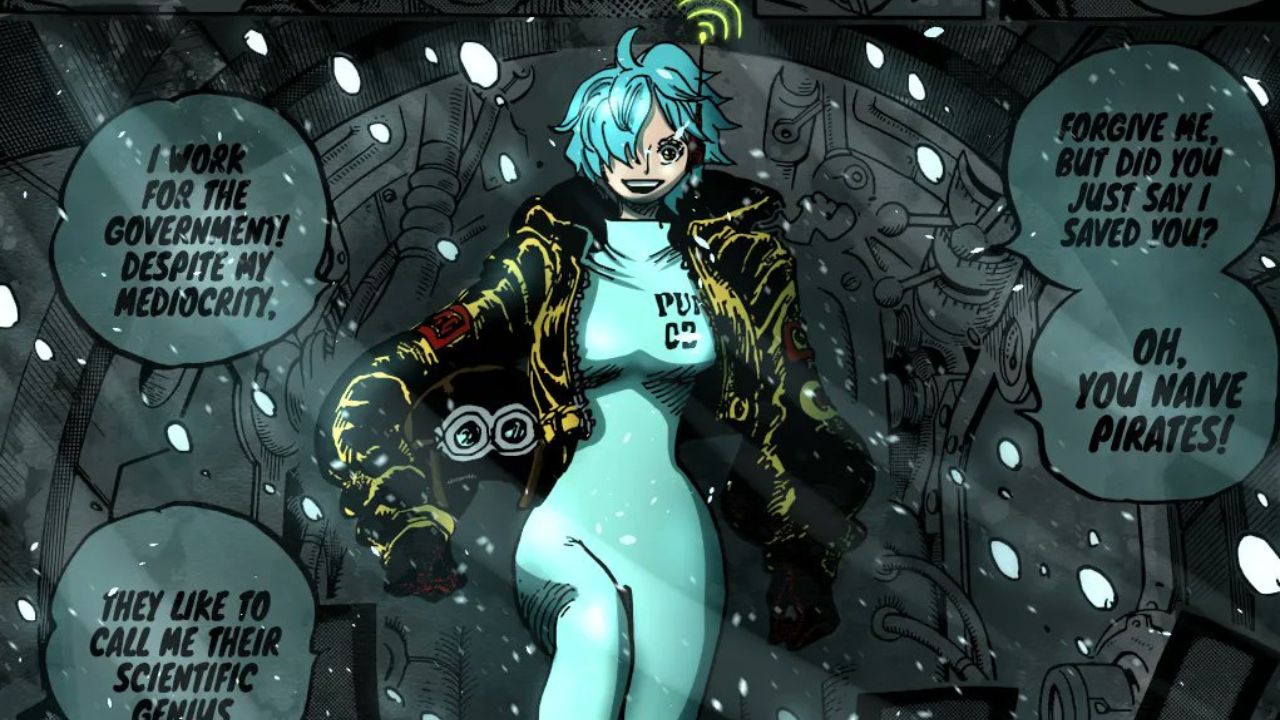 The spoilers for One Piece Chapter 1061 claimed that Dr. Vegapunk was introduced, and it was indeed surprising to see the character come out and greet the straw hats. Well, let’s go through the One Piece Chapter 1061’s content one by one and break down the events that occurred in the latest chapter. Furthermore, we will also provide with few raw scans and colored panels provided by the fans on the internet. Here we bring you the latest One Piece series updates.

The cover page featuring Germa 66’s excursion continues, and the Vinsmoke sibling is free alongside Ceaser. The title of the chapter is “Egghead – The Island of Future”. The chapter continues with the Straw Hats struggling in the sea and Luffy goes to Chopper’s rescue when he is blown away from the wind and also grabs Jewelry Bonney who emerged from the current as well.

But Bonney is worried about the monster and tells straw hats to look down, and they see a huge shark. The shark tries to eat thousand sunny, but the ship manages to get out of its bite. Zoro is surprised to see a shark that big and says if it is even a shark because it is made out of metals. Jinbei is worried about Luffy and Chopper who fell into the sea and handed over the helm to Franky, goes to their rescue. Meanwhile, Franky initiates the propeller of the Ship and tries to run from the Shark.

However, the shark has a cannon inside its mouth, and it fires at the Thousand Sunny, and the ship sinks into the sea with the straw hats in it. Straw Hats cannot swim on the surface of the sea due to the sea’s heavy current, but a robot appears inside the water and destroys the metallic Shark. Meanwhile, Jinbei also runs away from the Shark’s cannon and brings Luffy, Chopper, and Bonney to a nearby island.

Navy Base on a nearby Island

Tashigi is on a nearby Island of the straw hats, taking care of the children from the Punk Hazard island. A vice admiral named Doll comes up to Tashigi and tells her about Helmeppo, who is worried about Koby and asks her to do something about it. Whereas, Helmeppo and Hibari, who are both Navy Commender from the “Sword” team, ask Rear Admiral “Prince Grus” for his help to get Koby back from the Blackbeard.

Idk who this is but why is she my everything bruh 😫 #ONEPIECE1061 pic.twitter.com/ybnODnjZuI

Helmeppo mentions that “Egghead” Island is close by and can’t they borrow Seraphim from there and rescue Koby. Rear Admiral denies Koby’s rescue and says that they are in no position to do anything now.

On an Island nearby, Luffy, Chopper, Jinbei, and Bonney are seen, and she tells Luffy that she is part of the worst generation just as he is, and they met two years ago on Sabaody Island. Bonney thanks them for saving but says that they are still enemies, and she can’t believe that he is an emperor. Jinbei asks Bonney where her crew and ship are, and Bonney tells her that she came here alone and the Shark ate her ship.

Luffy and Chopper say that they are hungry and say that let’s go to a nearby restaurant. Bonney is surprised that they don’t know where they are and tells her that they won’t find any food here because it is a government facility. She adds that this Island is called Egghead, and it is said to be 500 years in the future, more importantly, Dr. Vegapunk’s research lab is here, and Bonney is here for Dr. Vegapunk.

Meanwhile, in the sea, a giant robot lifts the Thousand Sunny from the sea, rescuing the Straw hats from drowning. The crew is surprised to see a giant robot, and Franky thanks it for saving them and asks who is operating it. A girl appears from the robot and murmurs about the shark and how it was a failure. She further adds that she did not help the pirates and tells them that she works for the government and knows as the scientific genius named “Dr. Vegapunk”.

Also Read: How Old Is Boruto Uzumaki In Boruto: Naruto Next Generation?