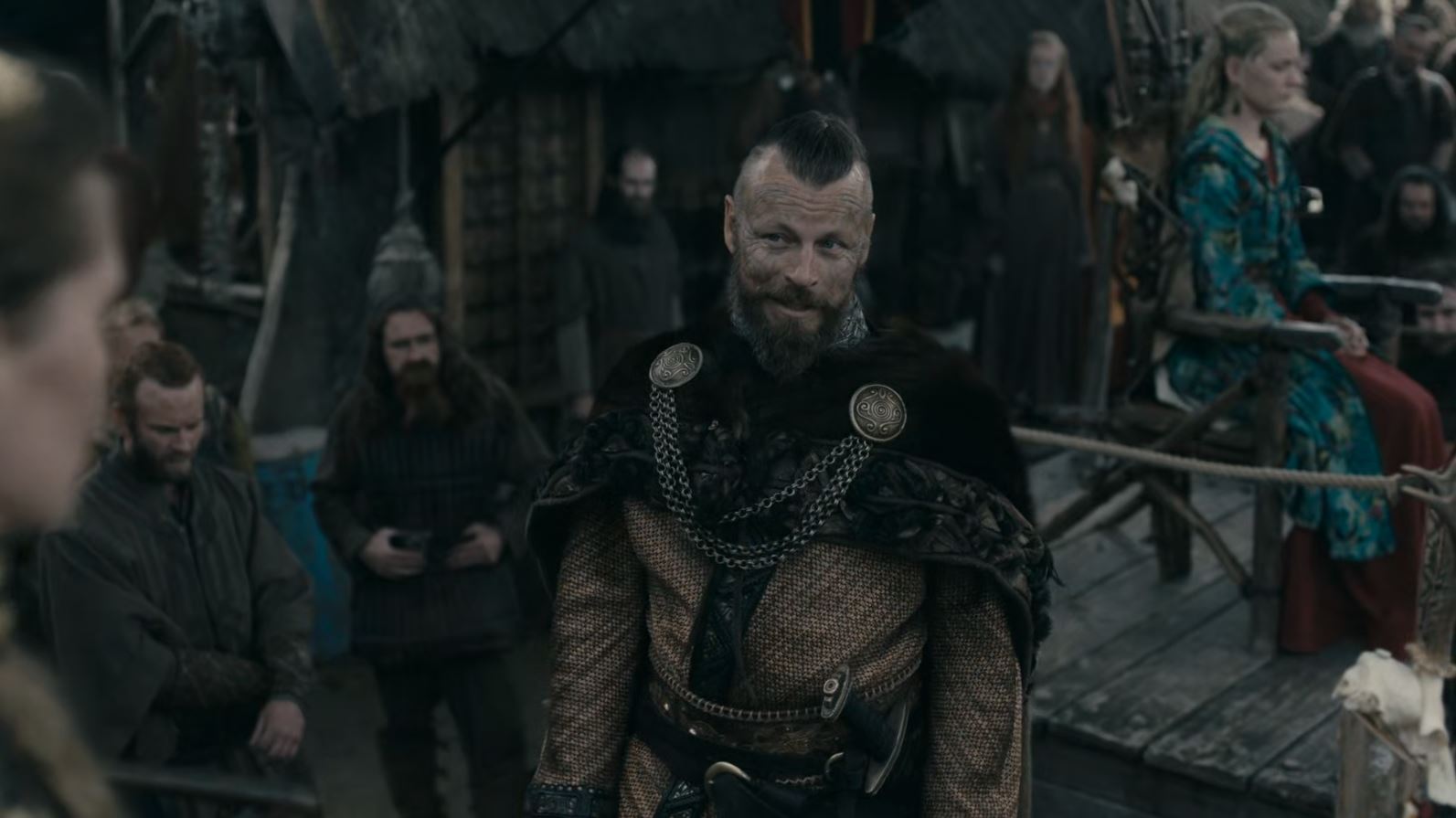 Beginning the second part of Vikings Season 6, Episode 13, titled “The Signal” follows the aftermath of the war, which saw the impending death of Bjorn Ironside. Now, as things go, Vikings is a show best at its action and narrative. But this episode is one that makes use of storytelling to further the plot ahead. We see developments in all three plains – Kattegat, Kiev, and the sea. Part 1 of the season left us with quite a bit to be dealt with. With an empty throne of Kattegat, a redemption voyage through the seas, and a strained relationship among brothers, things look perilous.

Now following the voyage Ubbe, Torvi, Othere, Ketill, and Yngvild, we are now in the great sea. Ubbe starts to lose faith finding out the reason for the course of their route while Ketill is getting paranoid by the littlest of things. This has been shown by Adam Copeland’s (Ketill) atrocious reactions to a simple conversation between Ubbe and Othere.

In Norse mythology, there exists a sea monster by the name of Jormungandr. Jormungandr is depicted as the middle child of Angrboda and Loki, who was later tossed into the sea. The serpent was so large that it could hold its own tail around the world. And it was said, the moment it releases its tail would deem the end of the world, Ragnarok. According to the mythos, Thor was an arch-enemy of the Great World Serpent and had encountered it in one of his fishing exploits.

Being following the Norse faith, Torvi (Georgia Hirst) sees it as a part of her daughter’s culture and chooses to narrate this story. This backfires as she only gets scared of this monster swirling across the deep sea. Later, when the voyage is hit by a storm, the ferocity signals impending doom. This is followed up by a gut-wrenching performance by Georgia Hirst trying to seek her child as she gets swept up by the storm. During this scene, we see Asa’s vision of the mythological creature only to have succumbed to the waves moments later.

The Strain between Lothbrok Brothers 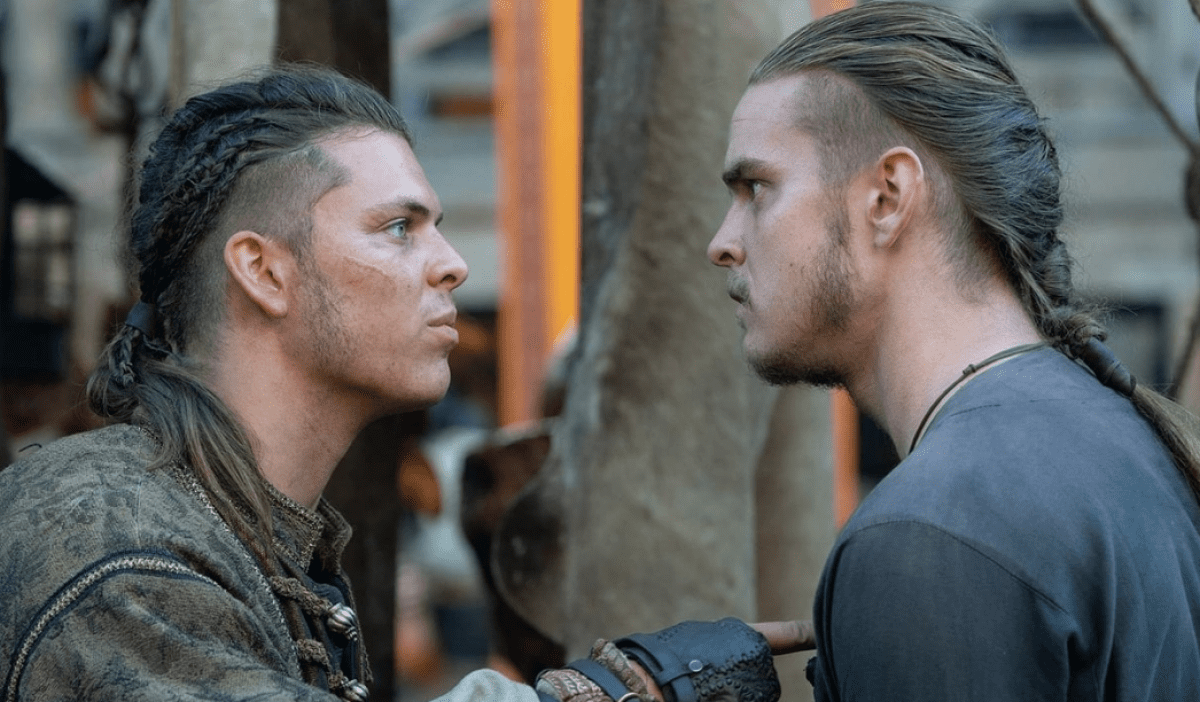 The strain and hatred within the Lothbrok siblings seem to not leave as deception and conspiracy keeps following them. Following Vikings Season 6 Part 1, Hvitserk has been sweet-talked by Prince Oleg, making him an attendee to him. Meanwhile, Prince Dir is on the move assigning Ivar to convey Prince Igor to Novgorod. Ivar is to receive a dagger as a signal to the spirit away from Kiev. Now, as things stand, Ivar is being pushed away by Prince Oleg while he conducts several meetings with his brother, Hvitserk. Ivar waits for Hvitserk, and this forms a clash between attitude and pride. Hvitserk finally starts feeling valued while Ivar is still clutching on his pride. This conversation takes a turn as both trade blows, which eventually turns to a one-sided beat down.

As Hvitserk points his brother’s sword-like crutch, he throws it away, which speaks volumes about their bonds defined by their blood. This infighting is observed by a grinning Oleg whose aim at pitting the brothers against one another seems to be working. Later, as Oleg has Ivar in his grace, he again tries causing a riff. By asking if he would like to get his brother killed. But Ivar denies it as he keeps Oleg in retrospect of keeping his focus on his brother than Prince Igor. This is staged by him with the line, “If anyone kills him, it should be me. A brother’s privilege.” This can only be interpreted as a conspiracy to come forth or a simple diversion, which we will follow up later. If and so this is just a diversion, one can see within all this hatred lies a bond between the siblings. Katia delivers the signal to Ivar.

Having been tasked to convey Prince Igor, Ivar finally gets his signal from none other than Katia. After which, Ivar goes to reconcile with Hvitserk to overcome their differences to head along with Prince Dir’s getaway. During the reconciliation, Ivar conveys Oleg’s true intentions towards him as Ivar denies the opportunity to get him killed. Hvitserk gets to know that he was only being played, so they get pitted against one another. Now, the question is between all these conspiracies, and there lie many other questions. Considering the conversations Oleg has had with Hvitserk, is Ivar being deceived. And only recently knowing of Prince Dir’s intentions, Katia is the one to deliver the signal. Is she truly a part of it, or is this another form of deception? Only time will tell, in this game of lies, who is actually playing the others.

Christianity being a new religion in their times, Easter is a huge occasion in Kiev. And will be met by thousands of people arriving to witness the crucifixion of Christ. This could be used as an opportunity to spirit away with the Prince. Ivar’s faith gets tested as he has to make a decision on his brother’s assessment of the situation. On Easter, the scene as escalating showing how social conventions keeps one away from what’s important. Oleg, dressed in white, attends the ceremony, which sees a bloodied man carrying a huge cross toward him slowly. While Katia, dressed in white with a matching hat, escorts Igor through the rooms. Oleg realizes that Prince Igor is not at the ceremony.

Soon Oleg realizes how Prince Igor is nowhere around but is trapped by the social convention, which prevents him from taking action. Meanwhile, Ivar, Igor, Katia and Hvitserk, all get away from the city, leaving a few dead soldiers near the walls. This makes up for great television, as we are bound to see a chase and encounters between King Harald and the group.

No more having a ruler and losing a fair share of important characters; the throne of Kattegat is empty. This is depicted by the scene where Gunnhild is at the great hall, which was graced by characters such as Lagertha and Bjorn. But now, being alone and alienated, she must take action to set a new ruler. She proposes an election where she herself wishes to stand and proposes her actions as its ruler. She proposes to follow up with Bjorn in building resources, defenses, keeping away aggressors, and to shape the future. Not being the only widow to Bjorn, she asks Ingrid to have her say. Ingrid wanted to become queen, sets her identity straight as nurturing the true ruler of Kattegat as she was carrying Bjorn’s child. While Eric denies his wishes of the ruling being a Skogarmaor and claims to have not picked a side between Ingrid and Gunnhild. Gunnhild proposes an election and wants to stand for it.

During the episode, we get a glimpse of a buildup to the arrival of King Harald, who was deemed defeated by the Ruse. But has arrived alongside Skane, a brute who we will seem more from future. As we are shown a scene where he has a conversation with Gunnhild. Not humbled or losing his swagger by his defeat from Ruse, Peter Franzen (Harald) plays up a confident display of deserving to be the next ruler. As he disregards the judgment of people through elections and self-assigns himself the role of King.

The episode is quite likable in terms of storytelling narrative. It makes use of symbolism and religions to form constructs keeping people adhered to their beliefs. In Vikings Season 6, we see how religion comes to play as a social convention grasping people by their throats. First being the Jormungandr, which seems to have swept away Torvi’s daughter. Second, she arrives from Ingrid as she conducts barbaric rituals at Bjorn’s grave monument. Third, is Good Friday as the ceremonies hold Oleg from taking actions adhering to social conventions. During the ceremony, we see a bloodied man carrying a cross which is quite extreme and barbaric to the modern sensibility.

This episode was able to create a tone in events to question the plot as to who is the conspirer and the conspired. This keeps us at the edge of the seats to binge through the future episodes. As events start getting heated up, we set forth to find out will Ivar be able to convey Igor to Kattegat? Will Ubbe and Torvi get back to Kattegat? And what will happen to Gunnhild, and will she allow Harald to run loose. You can watch all episodes by Vikings on Amazon Prime Video.