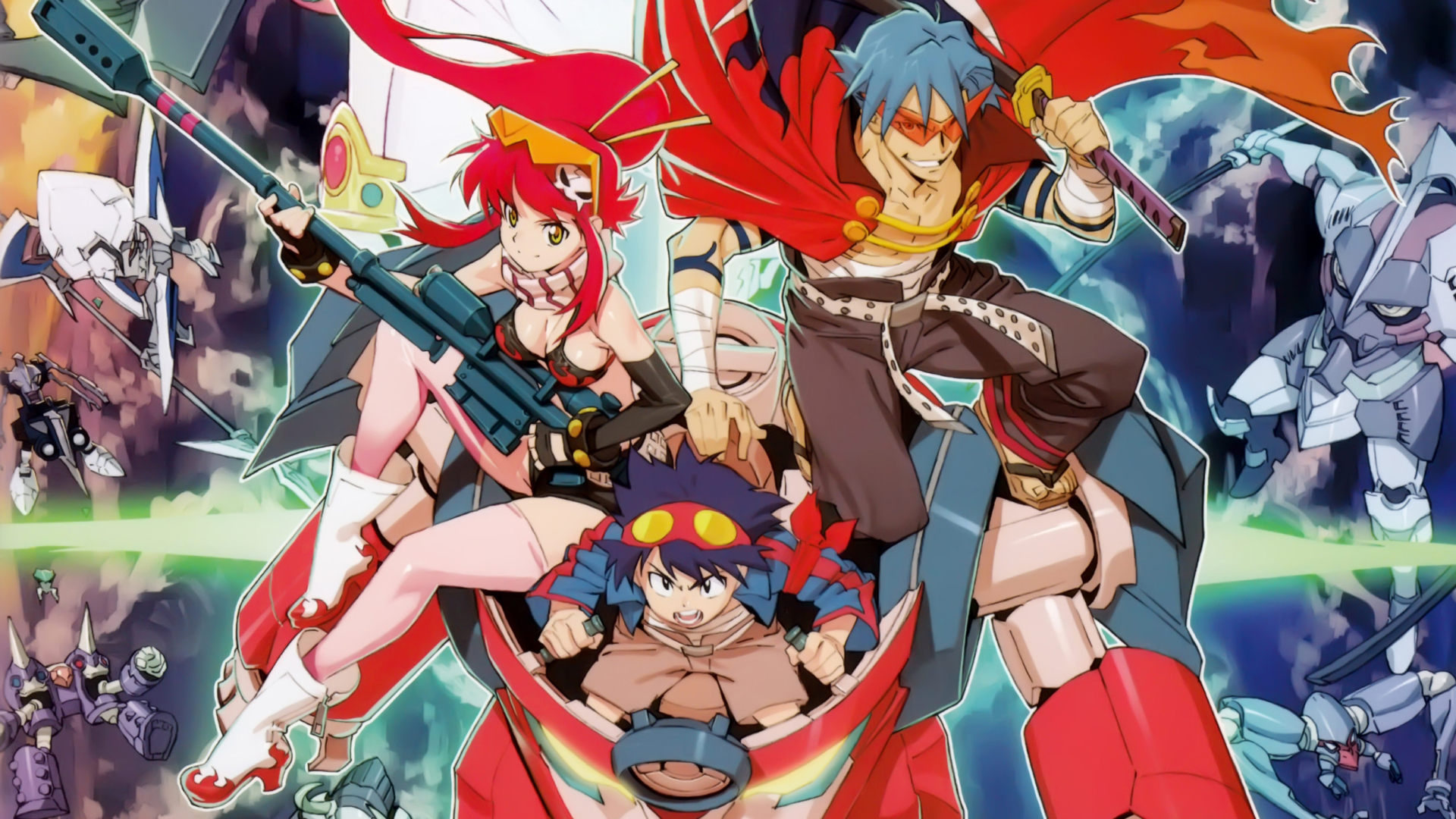 All major characters from Gurren Lagann.

We all love good action films, and it also applies to the world of anime. So, in this article, I am going to recommend to you some great anime that you can watch in July to keep up with your action anime cravings. 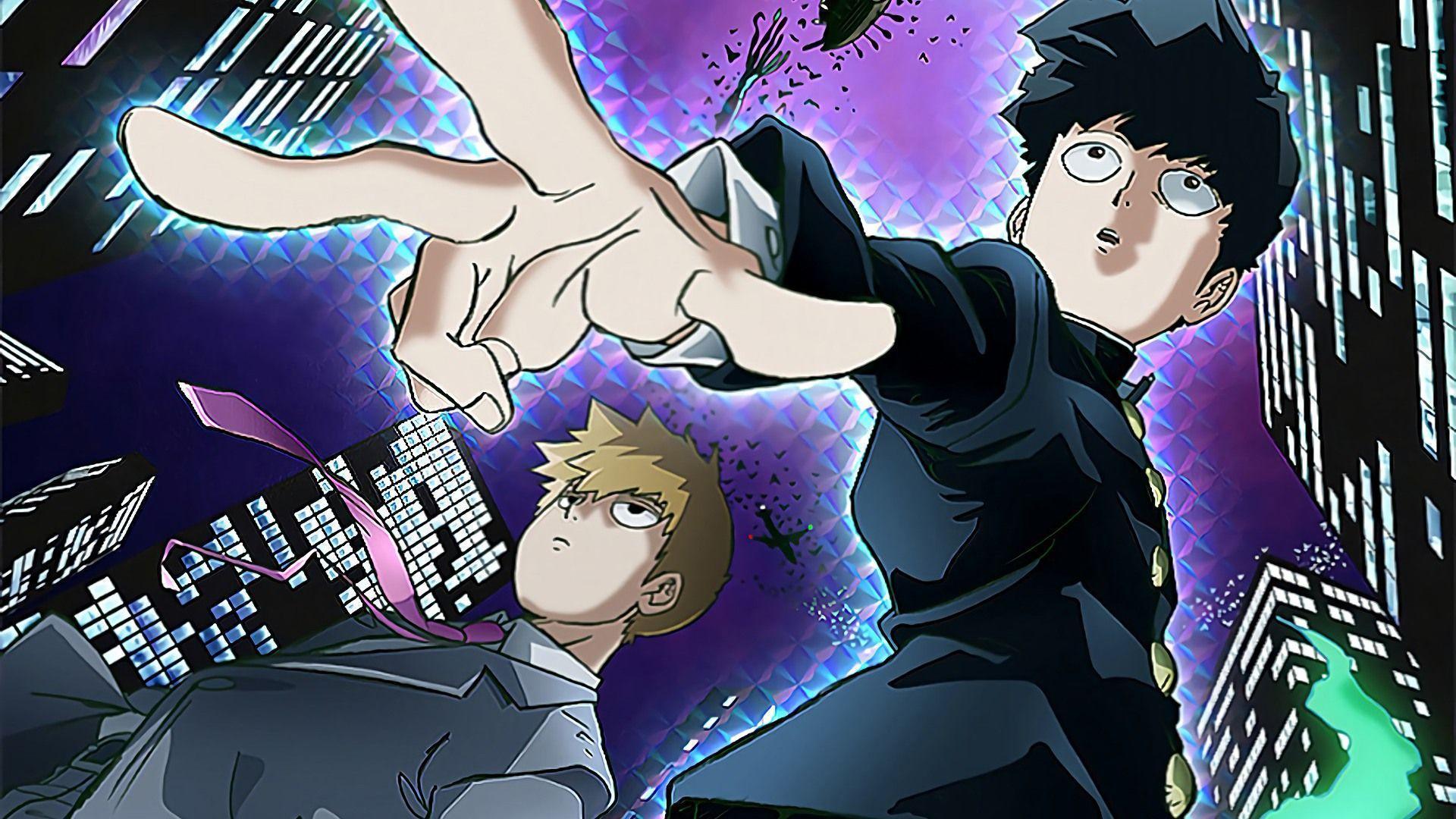 Mob Psycho 100 another great anime from the creator of One-Punch Man.

Shigeo “Mob” Kageyama is a supernatural psychic who is growing into his powers. He works with his mentor Reigen Arataka to take on supernatural requests that range from exorcisms to battling urban legends. The anime is created by One, the maker of another hit manga series, one punch man that is very popular among the audience around japan and the world. There are 2 seasons of this full-on action fledged anime and another season is in works. The manga has been ended way back in 2017. 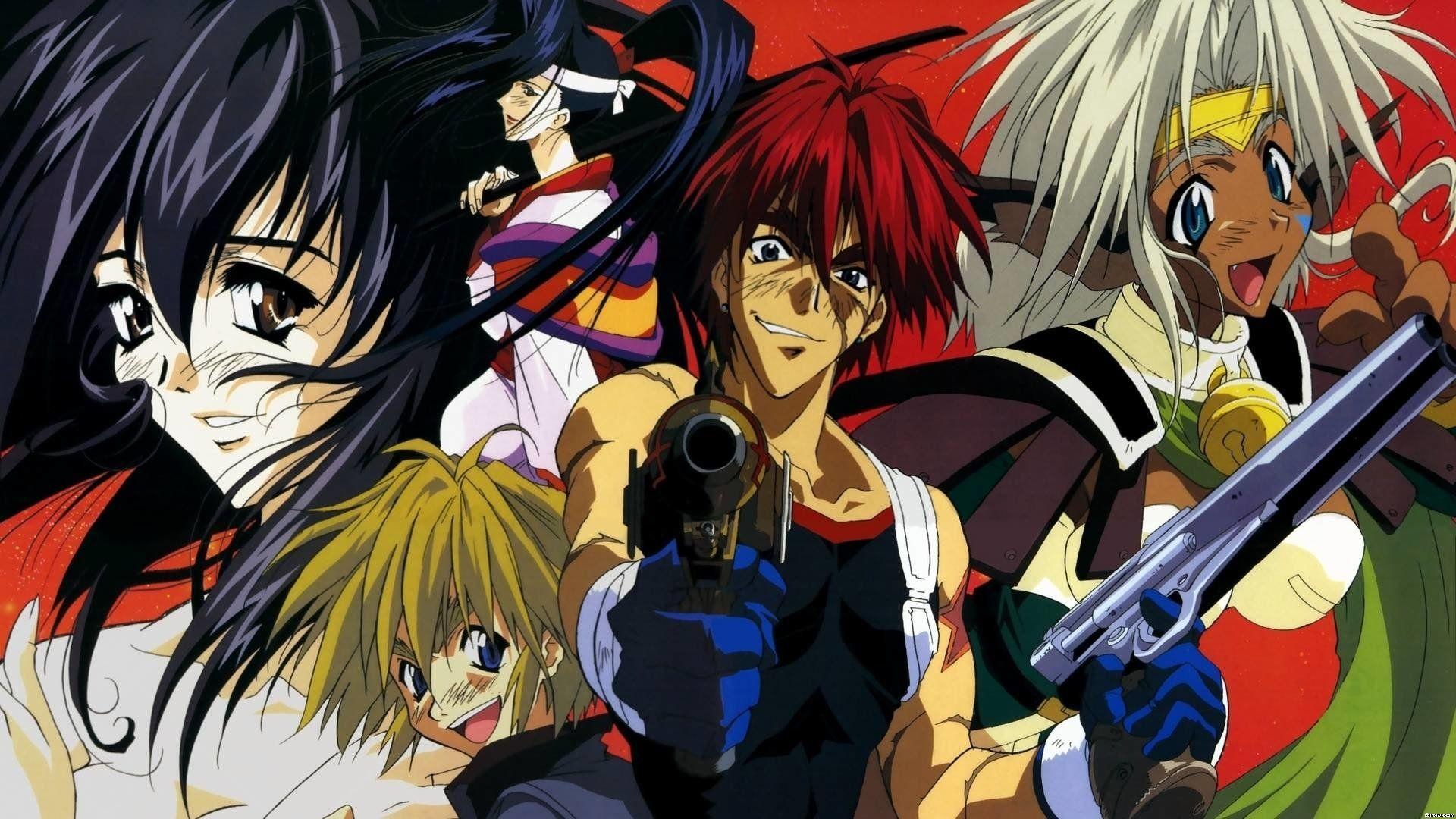 Outlaw Star a classic anime everyone should give a try.

It is one of the classic anime to be featured in this list, Outlaw Star gets a big dosage of both action and comedy, with some drama glimmers tossed in. Gene Starwind and his childhood friend Jim Hawking have a company where they do some odd work. One day, they find a strange girl with a special ship that travels through space, and they follow her. Together, they start picking up intriguing new crew members as they hunt for the legendary Galactic Leyline while also doing unusual work and time in orbit. The characters are memorable, and some of the more humorous ones, “The Toughest Woman in the World” and “Hot Springs Planet Tenrei,” have some sort of dialog to continue. Give this a go if you enjoy the action with any of the ecchi components that are rarely tossed in. 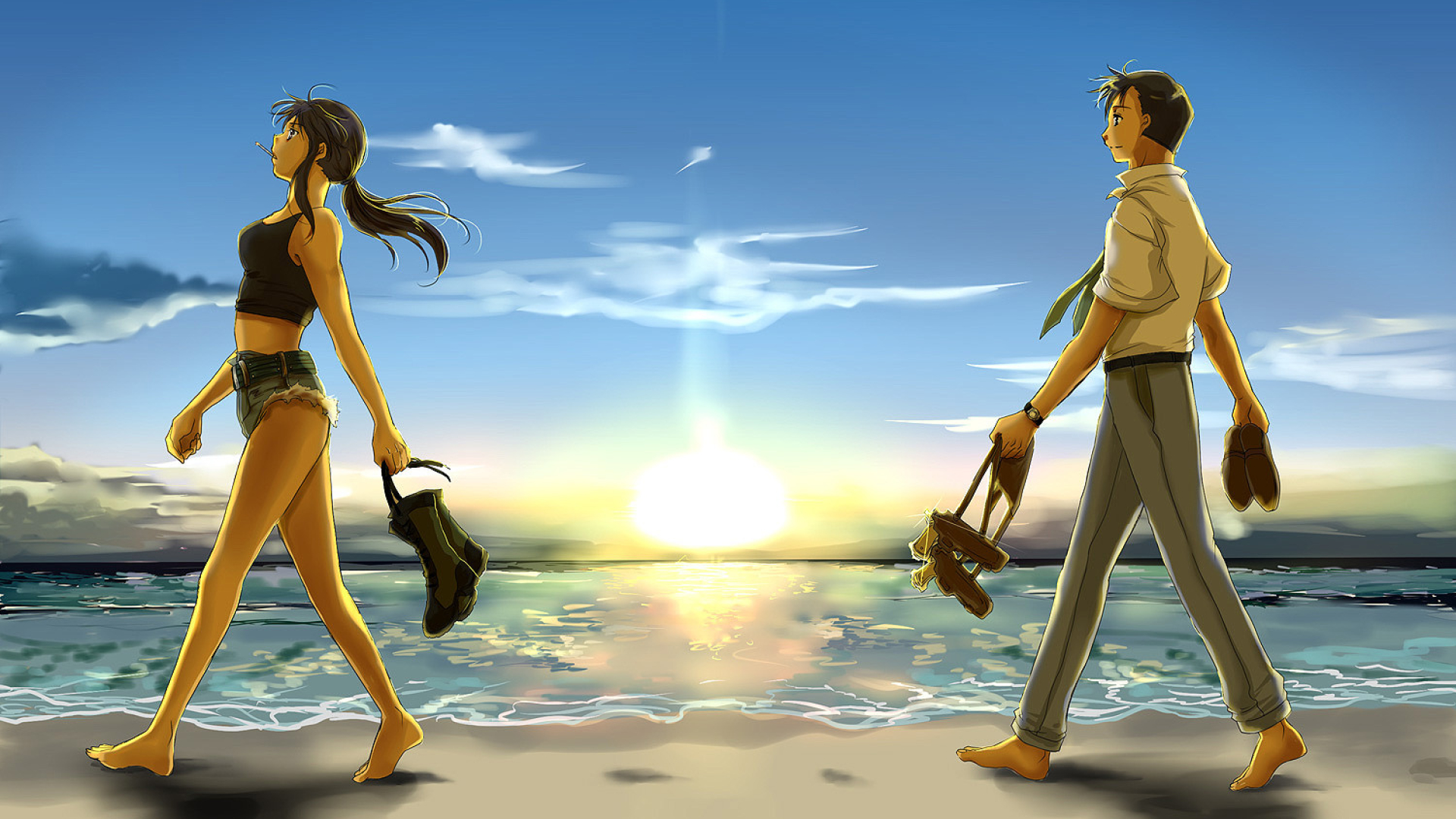 Revy and Rock from Black Lagoon.

Black Lagoon is one of the most popular act-comedy anime television series produced by well-known madhouse studios. It tells us about the adventures of the Lagoon Company the band of pirates, and the guy on the adventures of action-filled breakthrough islands and rivers from all over the world. It’s known for its action-filled scenes and narrative. It’s got some gore action and violent gunning sequences. It is the second classic anime to be on this list of action-filled anime series list. You will be glad to know that all the episodes of Black Lagoon are streaming on Netflix, so grab your popcorn and get on to the adventure with The Lagoon Company. 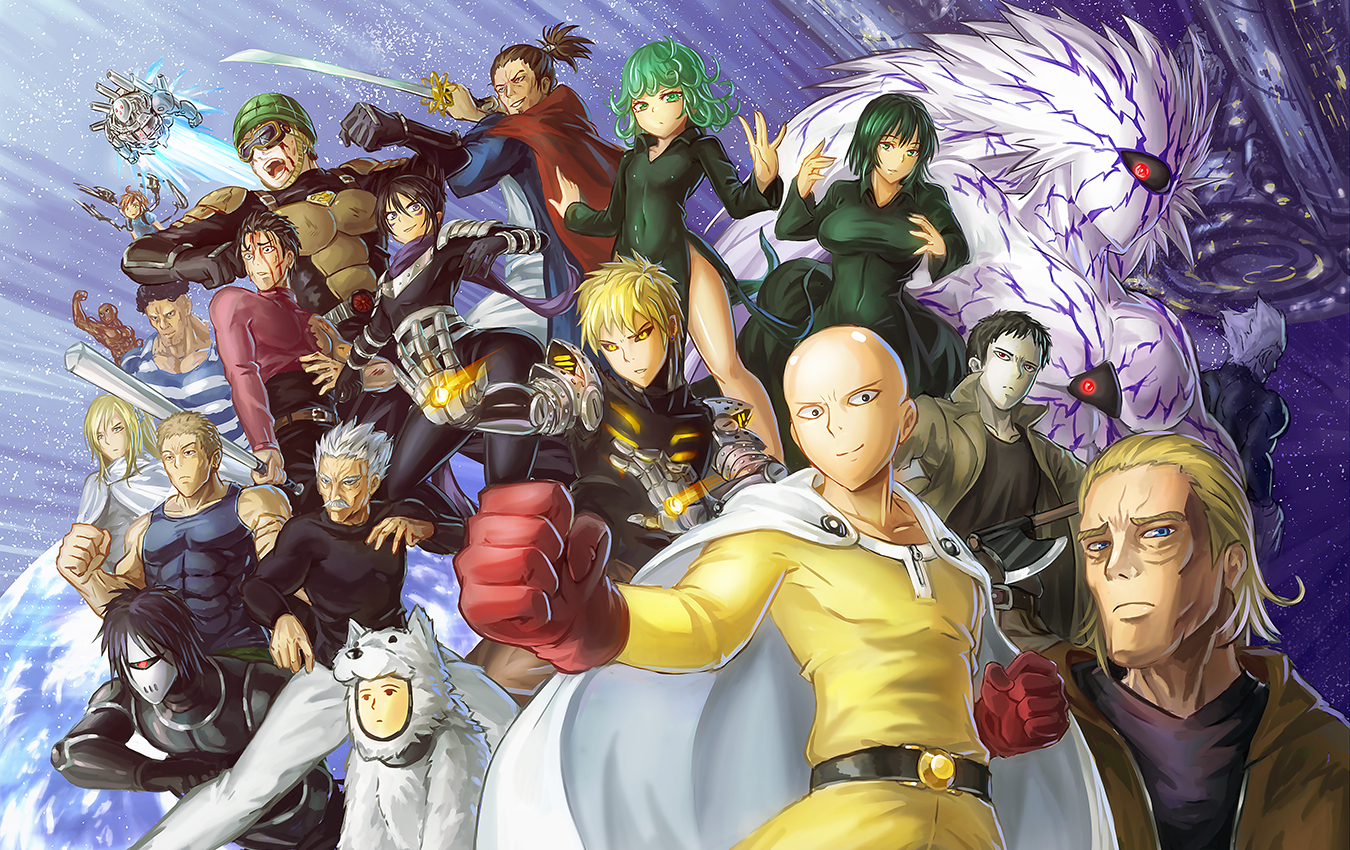 One of the most popular anime series in recent years.

What if an action hero had become so powerful that he could annihilate all his foes with a single strike? This is the basic premise of this show The show opens with a normal guy named Saitama, who makes the decision to undergo a ridiculous training regimen to become a superhero. He’s kind of overdoing it, becoming so powerful that his opponents don’t pose a challenge, and he’s getting bored (and he’s going bald) as a result. The anime got so much popular that Saitama becomes the fitness icon the world of pop culture and fans are getting all hyped up for the upcoming seasons of one punch man. It is a fresh and unique take on the whole action and superhero genre of anime. 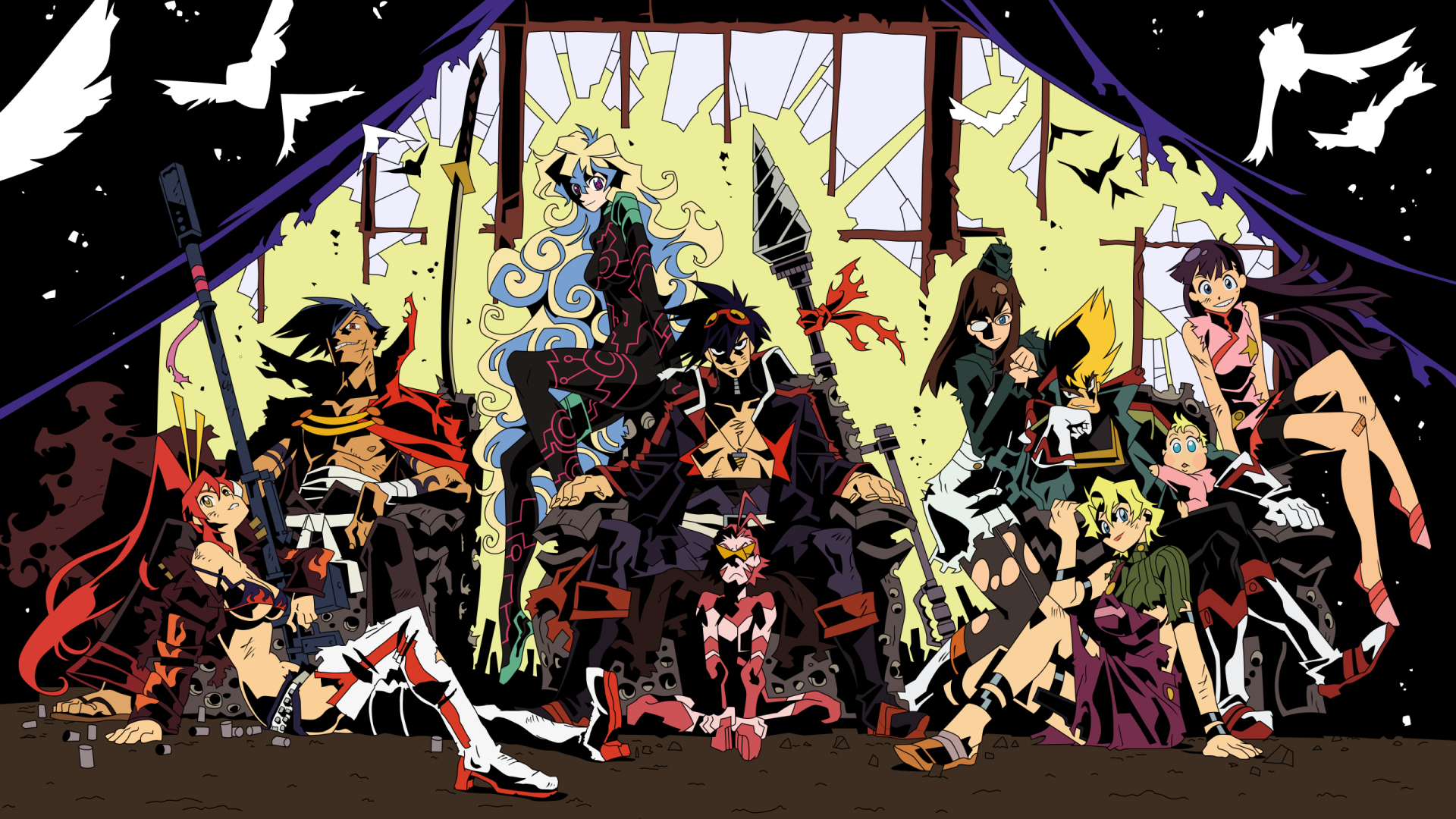 Gurren Lagann one of the best action-packed mecha anime.

Gurren Lagann focuses on two boys named Simon, and Kamina, born in the underground village, is one of those action anime that starts small and grows big. Simon uncovers an ancient shield and an assault that leads to a vision of the world. The two boys and a walking redhead named Yoko are going to the surface to investigate further. This anime also had some excellent characters, including Simon, being young and uncertain of himself, and Kamina being loud and breaking every limit in his way. If you want to watch an epic journey everywhere with a simple approach and unforgiving action, start with Gurren Lagann. 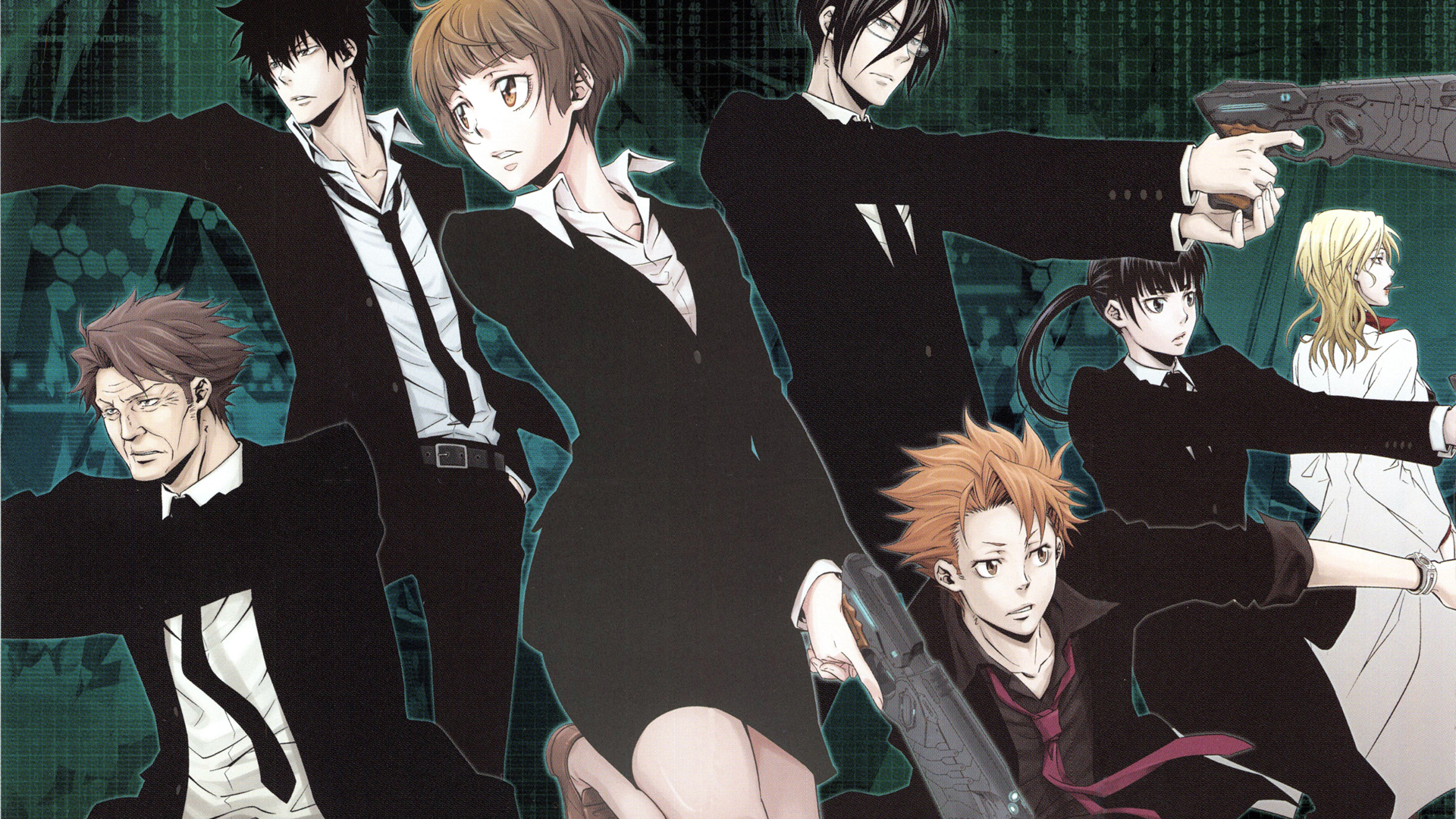 Psycho-Pass is one of the few anime which is known for action as well as sci-fi and cyberpunk themes. It has 8.4 ratings on My Anime List. Best known for its good plot and production quality. It has a complex story that will keep you on your seats, and you will binge it. Psycho-Pass is among the most popular anime series in recent years. The Japanese sci fi-based crime series centers extensively on a police department that employs a program of social monitoring to keep suspects out of the streets. It’s very good and very close to series like the Blade Runner film franchise. 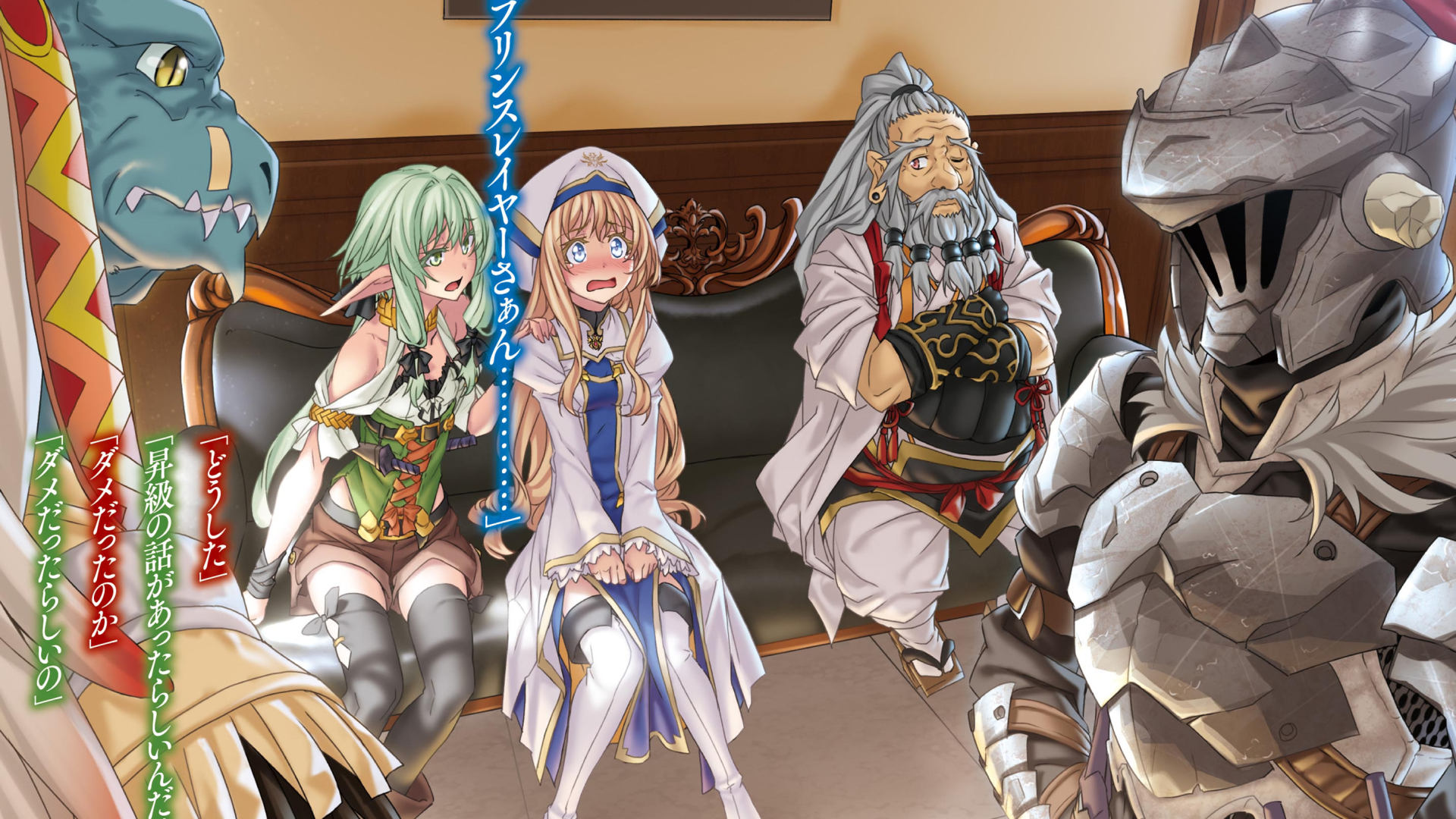 Goblin Slayer one of the best anime of 2018.

Set in a such a world where explorers come from far away to set up a guild and select jobs, and an underqualified priestess finds herself in an unpleasant circumstance after joining her very first adventuresome party. When her whole party is slain by goblins, she ‘s ready to express and face her untimely death when destiny places a person on her way by the name of Goblin Slayer. This is a comparatively new anime that demonstrates great promise and has gotten pretty amazing reviews at this point, even though it wasn’t without controversy when it first aired. Goblin Slayer has a rather unique pace, alternating between light-new adaptation and what looks like a dark fantasy. Goblin Slayer definitely has the potential to become a potential replacement favorite. 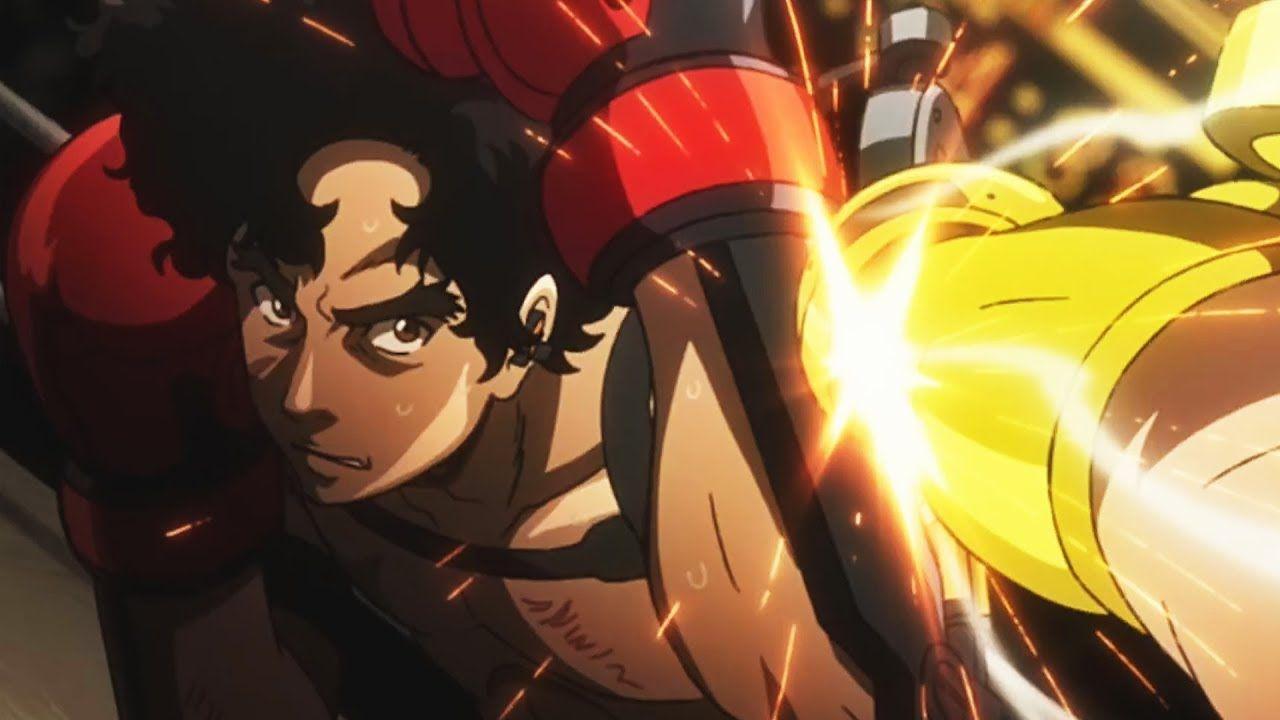 Megalobox is set up to celebrate the 50th anniversary of Ashita no Joe. The anime should give you some classic anime vibes like cowboy bebop and Trigun. The series is a science-fiction action anime based on the background of Boxing, and a second season is also announced, which will be set after a few years of the first season. The anime is set in a dystopian world where licensed people live in a city’s affluent portion and unlicensed people live in the outskirts of the city. The series revolves around an underground Megalo boxer called Junk Dog (Gearless Joe) joining a boxing competition that will decide the most powerful Megalo Boxer of them all. 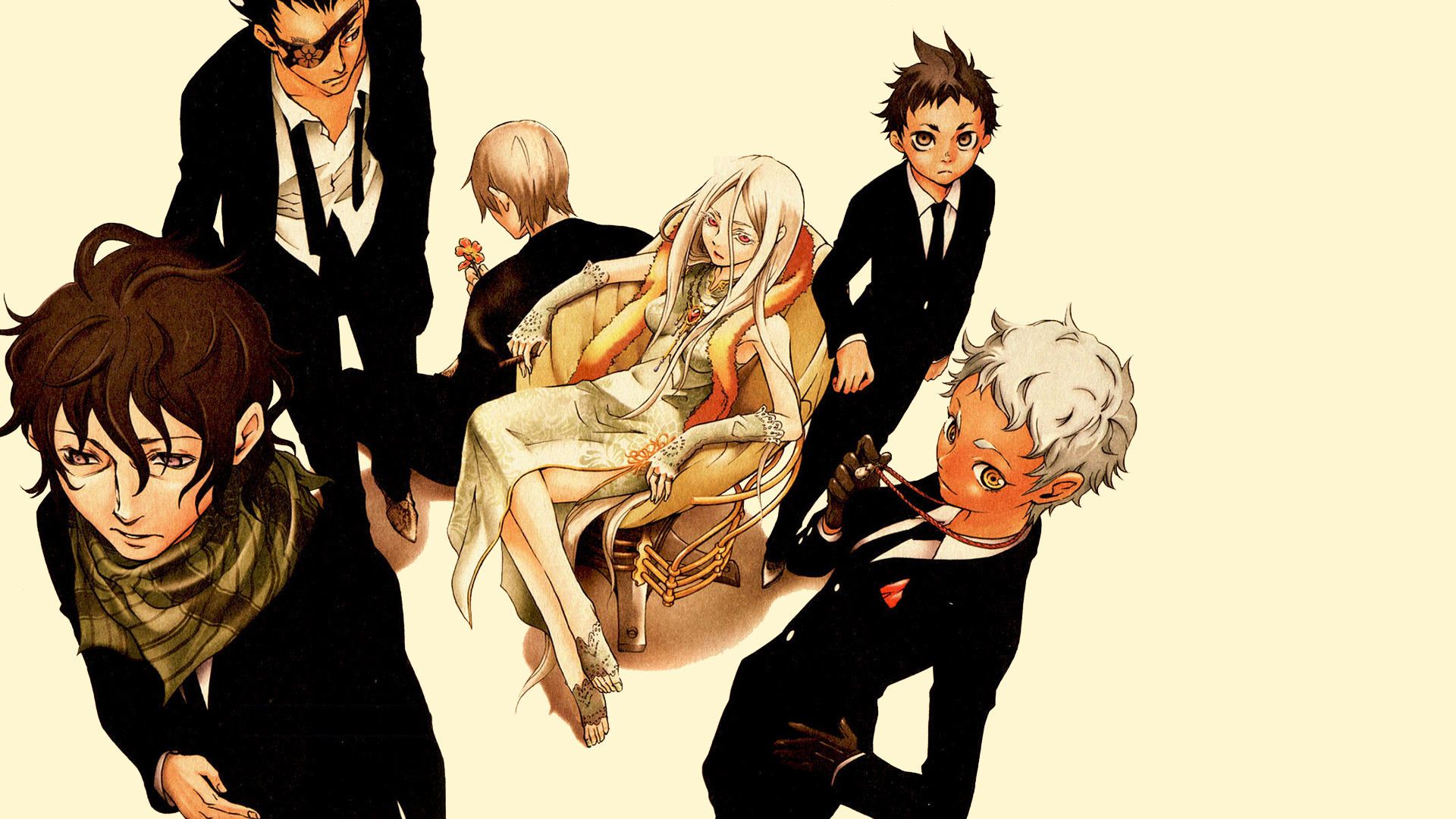 a still from Deadman Wonderland

Upon witnessing all of his classmates’ brutal murder, Igarashi Ganta, a junior high boy, is named as killer. He is then sent to Deadman Wonderland, a privately run jail and amusement park where inmates engage in Ninja Warrior-Esque, deadly games for entertainment for the public. Ganta finds himself thrown into yet another layer of a game restricted for inmates of unique skills. Although fighting the fight, he’s trying to uncover what’s going on and what this has to do with the deaths of his classmates and their imprisonment. A secret gem full of brutality, action, and humor, you ‘re going to be blown away by how masterfully they’ve been able to juggle all these shifting feelings, and maybe even doubt if mankind has an inherent appetite for blood, or if it’s something we’re taught. 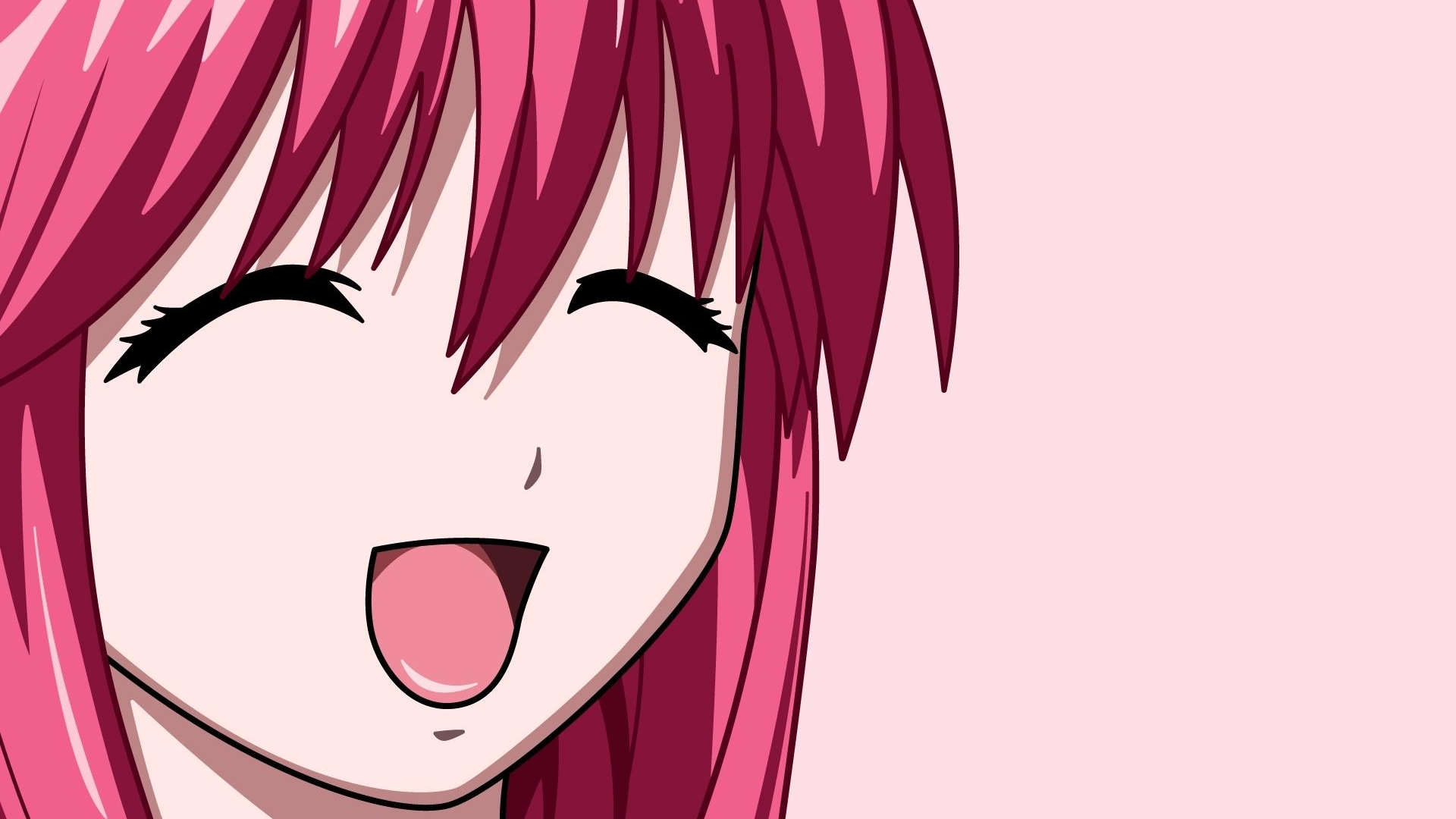 The most violent anime on this list as well as the most controversial. Anime fans used to watch more light anime like the Dragon Ball at that time, but it blew up and showed up straight-up action and violence. This relates to the story of a young girl named Lucy who escapes from a research experiment facility. The girl has superhuman abilities and arms that can slice anything that threatens her. Lucy has a split personality that drags other teens to her flight.