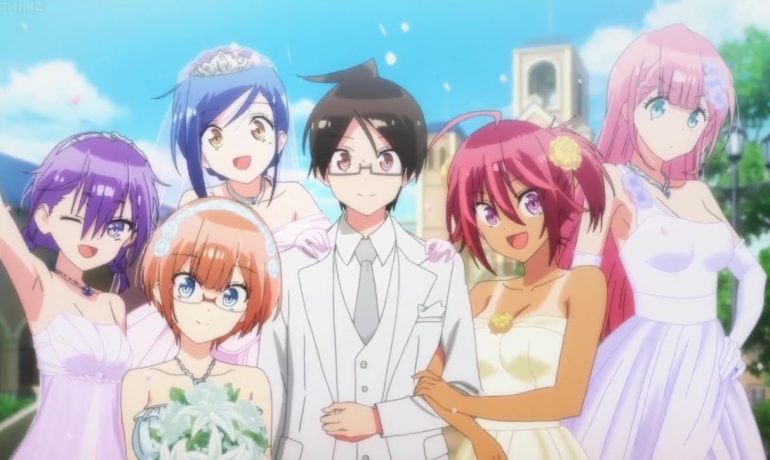 The Queen of Thin Ice, Part 9

After proposing to each other the two move to the new apartment they help each other to clean the house. Mafuyu is glad that they are finally together she keeps on holding Nariyuki tight close to her. Nariyuki can believe that they are starting a new life together. Mafuyu said they are starting it from today and Nariyuki keeps on confessing and telling her how he loves her. She grabs Nariyuki and hides on his back pretending as if she didn’t hear him.

She asks him to say those three lovely words again and he repeats I love you with a smile. Hearing that makes Mafuyu blush while shaking her head sniffing Nariyuki’s back. Nariyuki realizes the matter of the wedding and asks if they will be on time for the wedding. Mafuyu said yes they still have more time to spare. She checks again and said that there are still two hours for them to reach there.

Previously on We Never Learn Chapter 186

They both realize that the clock that they are checking on is broken and they all be like whaaat! while preparing to reach there in time. They both get ready and Mafuyu is driving with Nariyuki nearby panicking if they will make it in time.  He kept complaining since he told her that they should have moved another day, not on the wedding day. Mafuyu apologizes stating that it was her wish for them to move on the day of their wedding.

She is wearing a beautiful wedding dress with Nariyuki on his suit and he agrees with what she is saying. Mafuyu decided that it is better for her to step on and go for the speed limit. Nariyuki is worried if she is going to do it more than before after a few minutes they reach Esprit Marriages Church. The students cheer for them as they get inside the building. Mafuyu’s sister and her aunt shout congratulations to both of them.

The two couple that is about to get married are both shy and the Lil Sis told them to leave everything to her. She said that as their wedding planner and coordinator she’s got it all covered. Nariyuiki praise Amada for putting an effort into his wedding and Teruaki said her late husband will be overjoyed. Friends and family congratulate tMafuyu for marrying Nariyuki as she has promised before.

Mafuyu remembers her father. She then notices ant Akina and Natsunami who is calling Nariyuki big bro. She also realizes that her father cares about her future. When she looks back she saw her parents and she is glad that they are also here to support her. They told her how they regret it since they couldn’t become the best parents to her. They reveal that she was a timid child. That is why when she left home and said she was going into teaching and they were stubborn and unsupportive.

Her mother reveals that if they were strict about her skating it would lead to a bright future for her. They realize now that back then they were wrong since they wanted to choose a career for her. They both apologize and wished her a happy life.  They both open their hearts not and Mafuyu shed tears of joy with more support from her parents. They thank Nariyuki, for loving, choosing, and making their daughter happy.

Nariyuki swears that he will take her happiness as his first priority. Her mother puts on the veil of the bride on Mafuyu’s head. When mother lowers the bridge’s veil there are two meanings. The first is the final time when a mother helps the daughter to dress. The second one is closing a curtain on her single life. Later Mafuyu’s father walks his daughter to the wedding Aisle to give her away.

Nariyuki watches his new wife and her father, as they walk towards him. The two walk towards Naryuki which also has a meaning. When a father escorts the bride down Aisle to gives away his daughter. It symbolizes her past, present, and future. In her past, she was protected by her father’s love until arriving at the present day. Now that role is entrusted to the groom. They both reach Nariyuki and the two couples complete their wedding vows.

Naryuki lifts her veil and it happened which symbolized the start of their new life as a couple. When they are busy sharing their first true love kiss everyone’s face is filled with joy symbolizing indeed the two are really married.  That day was a joyous one everyone enjoyed it. A few weeks later Nariyuki treats his wife like a real queen. The two enjoy spending time together and went to the woods and they ran out of gas.

Nariyuki carries Mafuy’s purse and they take a walk, she can’t believe that they made such a blunder. She tells him that they will come and get the car later. While they are walking she raises her hand high looking at her ring and said that they are now officially married. They both enjoy walking together while holding each other’s hands. The members about how they struggled from the first day they met at school until now. As they continue to walk they promised each other how they will always stick together.

Read We Never Learn available on VIZ Media and Shueisha’s Manga plus official platforms. Raw scans for new chapters are released 2-3 days before their respective chapters are published. To support the Manga creators and publishers, we advise you to read the digital copies from their official websites and apps.