Mikadono Sanshimai Wa Angai, Choroi Chapter 49, is on the way to its publication date; fans are curious to know the release date as soon as possible. As Yaotome Sakura enters the storyline, there is no way to leave the three sisters or call them Mikadono sisters aren’t jealous.

As we know, they are in some sort of competition for Yuu (our protagonist). Remember, these are the same girls who used to call him ‘talentless.’ And now, we are in search of opportunities to get Yuu’s attention. Mikadono Sanshimai Wa Angai, Choroi is a manga of the genre Comedy, Harem, Romance, School life, and Shounen (or we can say mashup).

The manga follows Ayase Yuu, the son of a very renowned actress, who is not only famous nationally but internationally as she is a bag of talents. Contrary to her, our hero is just an ordinary, regular schoolboy.

The boy is forced to live with his mother’s friend, who ends up being the parent of the three tomboy girls with beauty and brains and goes to the same school as Yuu.  Story and Art both the things are both done by none other than ‘Hirakawa, Aya,’ who has written a good number of mangas that has a rating of 7+ on MyAnimeList.

Like the one we are talking about, which has a rating of 7.73 scores on my anime list. The volume started publishing on December 22, 2021. And has been continued publishing till now. As of now, it has published 48 chapters concluding four volumes. Let’s start o our discussion with Mikadono Sanshimai Wa Angai, Choroi Chapter 49. But before that, let’s take a quick look at the plot & recap what happened in chapter 48.

As the son of a heroic, honored actress, Yuu is under the burden of expectations to have talents like her mother as he gets transferred to Saika Academy. Saika Academy is a high-top, reputed academic school where one’s child can enhance their personal and unique talents.

As I said before, Yuu is completely contrary to her mother and is talentless in any work he does. And due to his mediocrity, he has no hope that he can cope with the three emperors of the school, titled Mikadono sisters, including Miwa, Niko & Kazuki. 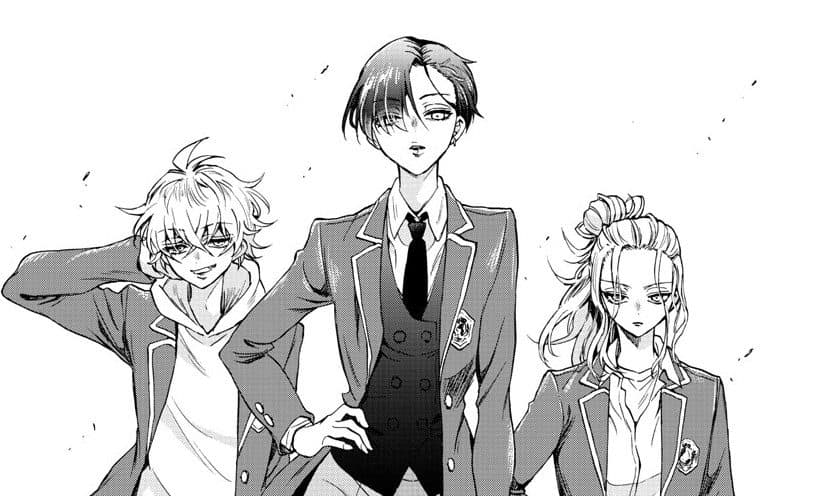 The trio is genius in their fields which goes like shogi, martial arts, and performing arts, as per the name above. Subaru’s (the mother of Yuu) friend agrees to keep Yuu with him in his house.

Now the only aim that Yuu is behind is to fulfill his mother’s final wish, which is to make a happy family. Because he never had love of mother due to their distinction. Later, it is revealed that the Mikadono sisters happen to be the daughters of his mother’s friend. The twist.

Despite the estrangement between them, he tries to make a bond with the trio to reach his goal of final wish. The sisters don’t take much notice or interest in him; it gets to our consciousness that the trio is less interested in opening themselves up not only to our hero but also to each other, as well as all having respective mastery in their personal fields of interest. However, Yuu endeavors to help the trio with his kind nature and can get the sisters together. Will the flower of love bloom?

The chapter starts with Yaotome-san saying ‘so good’ as a compliment to the food made by her and Yuu. In chapter 47, we see Yaotome in the house for one night over. And she has a strong belief in the sisters, that they can’t make any mistake.

She wants to impress them, so she asks Yuu to teach her how to cook for them as he always does. The war for getting pampering and attention from Yuu starts to ignite between the trio, which continues in this chapter. 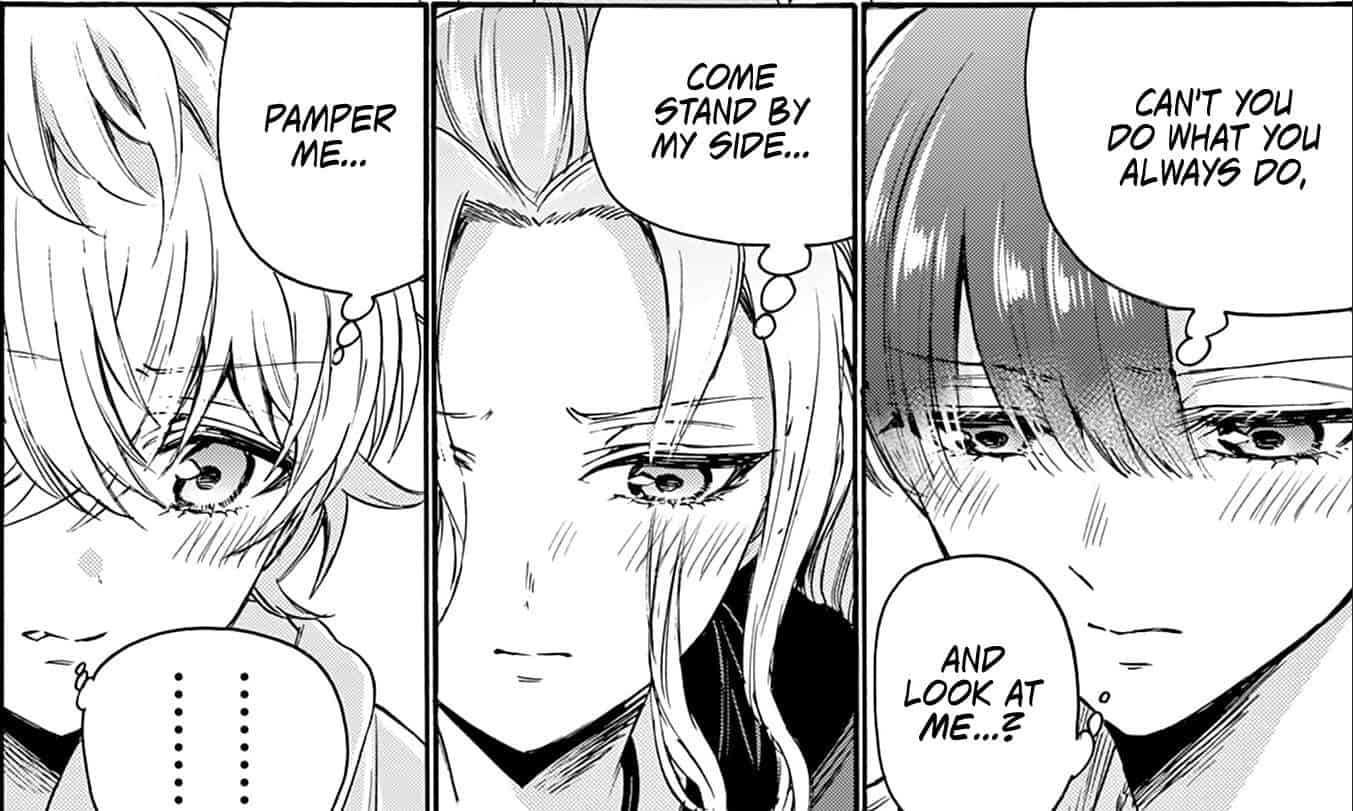 The three emperors want Yuu to pay attention to them, remembering Yuu’s moments.

It’s 7 PM, and all are at the dinner table. Yuu reacts to the compliment by explaining to Yaotome how the vegetables give enough flavor to food that even the absence of salt doesn’t matter. To which Yaotome exclaims, knowing that the girls eat this awesome food every day, and states to Mika that she is jealous of them.

Yaotome getting all the span from Yuu makes the sisters more determined not to lose. It’s 7:30, and they are done eating. Yaotome asks to help Yuu with the dishes and move. As she advances with the dishes, she stumbles and starts to fall on the surface with her face facing down, and Mika sees the scene of Yaotome on top of Yuu for a second.

But by the next second, without wasting any time, Kazuki catches Yaotome and Niko the Plates(money saved). Niko advises Yao to be careful following Kazuki and that they can’t let their guest be hurt.

Yao is now more amazed by them as earlier she lost three times to one of them in a game. The event follows Kazuki pouring a glass of water on herself, Niko trying to fall like Yao & Mika, making an excuse of not feeling well and getting dizzy to draw Yuu towards them.

Yuu says that looking at their strange act, he knows they want his attention, to which the trio becomes silent for a second. Then Yuu smiles and reveals he’s just fooling them around. The chapter ends with Yao stating that geniuses can be clumsy at times, like an ordinary her.

The schedule of the manga is to release a Fresh chapter every Thursday in its country, i.e., Japan. After Japan, it gets out to other countries. The previous chapter was released on January 07, 2023.

As per the time gap allotted to the series by the publisher for release, which is approx 14 days, we can assume that chapter 49 will be made available to read on January 21, 2023. If it happens to release on the predicted date, the time and date with respect to countries will be like this: 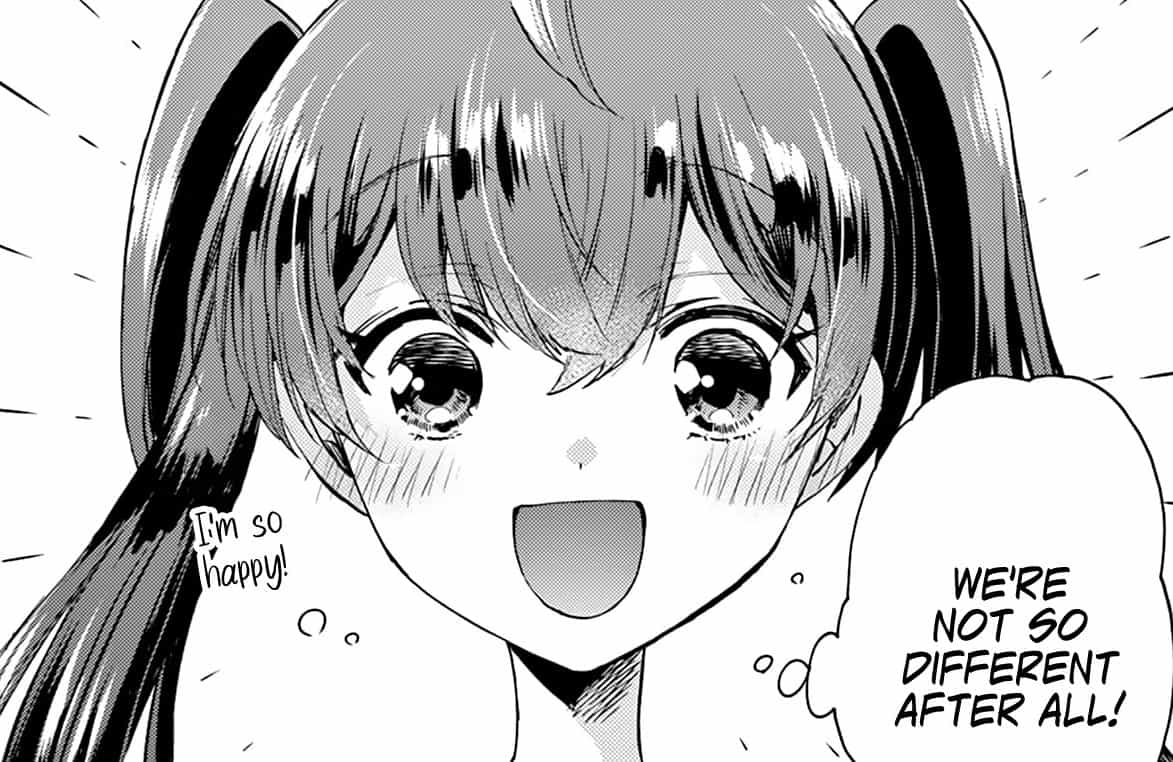 Yaotome is happy as geniuses are the same as ordinary

Mikadono Sanshimai Wa Angai, Choroi Chapter 49 can be read on  Billibilli comics online. You can head to the Shonen Sunday website, as they are the official publisher of the manga, to order your desired volumes.

If you believe you understand shonen manga, reconsider and immerse yourself in these stories about complicated, compelling individuals in wonderfully conceived realms. Shonen Sunday is a platform of many such sweet and light stories, some of which are amaranthine.

The platform costs a subscription for its service. As this manga is very popular, it is worth it.

How Is This Harem Manga Different From Others?

A truly likable harem manga with compelling characters and pleasant emotions is difficult to come by, isn’t it? Now, this series has a similar setting to other works of the type, such as Love Hina and The Temple of Amagami, in that our male lead chooses Tocohabit with the major female protagonists, and despite their initial reluctance, they gradually start to transform and form bonds well with the leading figure. “So why do I check this then?” you could ask. 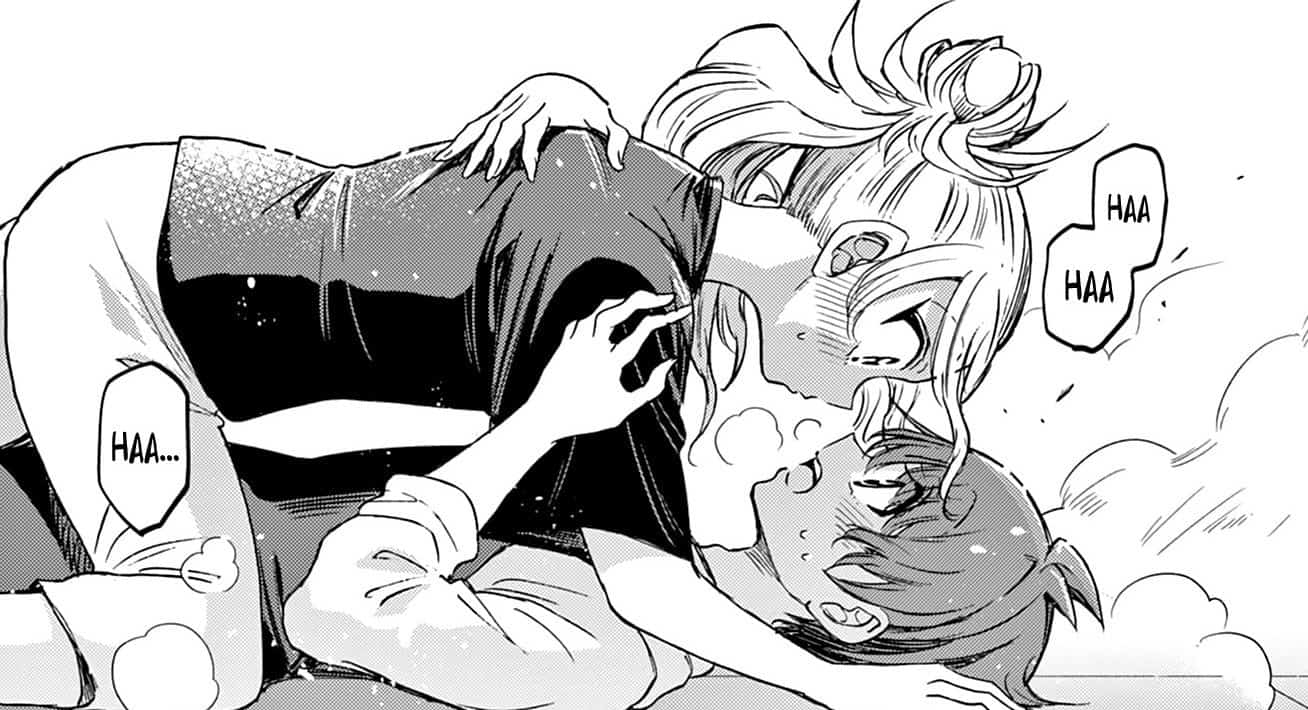 To commence with, while it may appear at first glance to be similar to others in the category, the tale is much more fascinating. Our central protagonist, or called hero, the legend’s son, is a fully ordinary individual who received no high ability from his mom.

As a result, he has now been considered to be a failure. Our female leads, the three Mikadono siblings, in contrast, hand, are all overachievers or geniuses in their various disciplines. So seeing our MC assist the female characters along their journey towards success and build their friendship sounds pretty gratifying.

Second, this series does not squander your time by stretching out the plot with utterly unneeded ensembles. And, believe me, it does not really rely on utterly irrelevant ecchi crap whatsoever, which surprised me.

The plot’s flow is wonderful; you rarely feel as if you’re following a segment that has no bearing on the plot. Finally, there are personalities. These are personable, every persona has been adequately developed by this juncture (C41), and they are neither bothersome.

They do not even make bad judgments just to make the whole thing longer and more interesting. Finally, the plot is relaxed, invigorating, and wholesome; the interactions are neither monotonous nor difficult to comprehend.