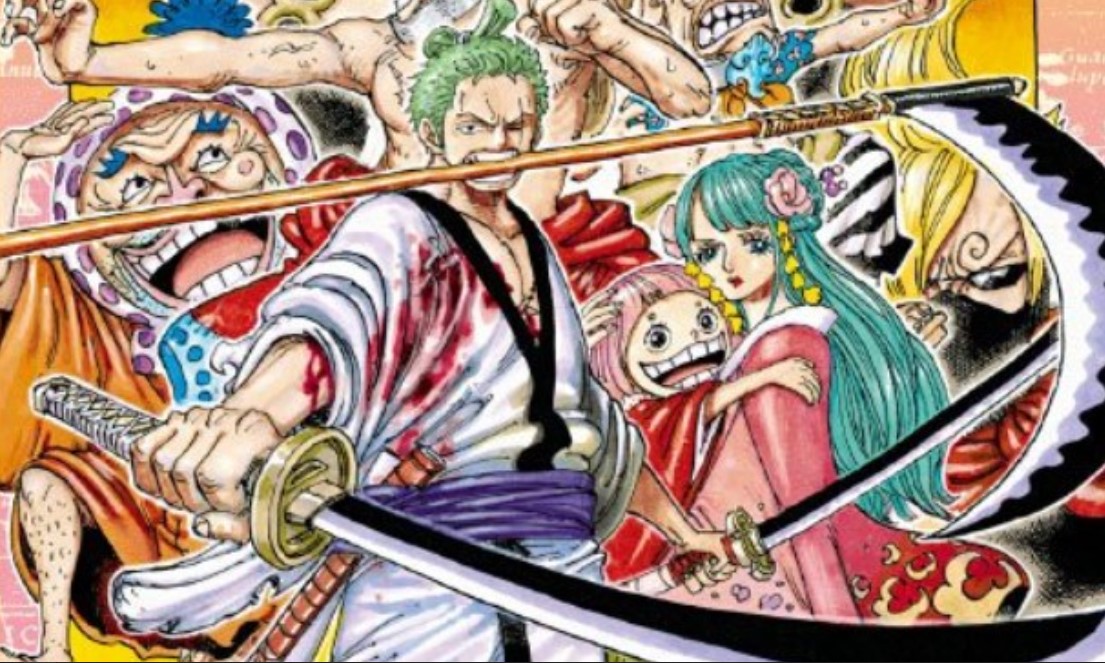 One Piece manga break has finally come to an end as a new chapter will be releasing this weekend. This year, the manga has only released only two chapters that were filled with lots of action. Ever since One Piece Chapter 100, the manga has focused on the fight in the last stage of Onigashima. Big Mom has joined forces with Kaido and is now fighting against the new generation of pirates.

Luffy, Law, Kid, Killer, and Zoro now stand before the terrifying forces of Kaido and Big Mom, who will not show any mercy. Kaidou even pointed out that it will be a shame to kill them. But he could not help it since they are out to get his head. Now whoever wins takes all. Immediately after the release of One Piece 1000, the manga went on a break just when Luffy has unleashed his new attack.

Now One Piece Chapter 1001 came with a full focus on the fight without any interruptions. One Piece chapter 1002 will be officially released this weekend with more updates on the fight. The new generation is now going all about against Kaidou and Big Mom. And now Kaidou told Big Momm to let them attack and want to see what they can do. One Piece Chapter 1002 will officially come on on the weekend. The spoilers for the chapter are out. Let us take a look at them: 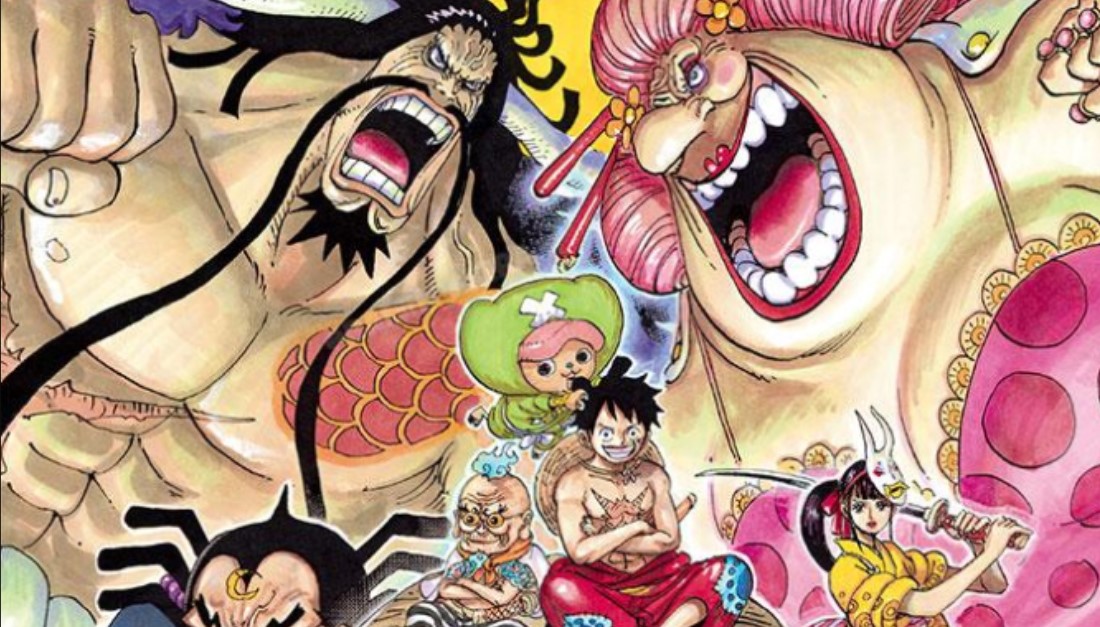 The chapter is titled “Younkou Vs. New Generation”

Rob Lucci is on the convert feeding pigeons in the park.

The chapter starts by showing Kaidou unleashing his wind blades “Kaifuu” at the worst generations. Kid’s metal robot got hit but appeared fine as it is made of scrap metals. Zoro uses his sword to attack, and Luffy jumped to avoid Kaidou’s attack.

Luffy then responded with a new attack, “Gomu Gomu no Kong rifle,” and punched Kaidou on the face. Kaidou is pushed back and about to fall, and Kid takes this chance to grab Kaidou’s neck. Then he attacked him with a new attack, “Slam Gibson,” and throws him to the ground.

Law moves next to Kaidou with his powers and says he has never seen a dragon’s internal organs before. He expects that the heart is around where he is and pierces Kaisou with Gamma Knife. Kidou screams, but he is not badly injured.

Kaidou pointed out that these brats aren’t just tough idiots, but they have studied how tough his skin is. Killer runs on top of Kaidou’s body and attacks him with Kamaa Sonic. His blades become massive and managed to cut through Kaidou’s skin and damages his insides.

Big Mom hits Killer with a new attack, “Indra,” and tells him that there is no escape for them as long as they are under the sky. Kaidou tries to devour Killer, who is falling from the sky, but Luffy attacked him with Rhino Schneider.

Kaidou prepares to strike with bolo breath, but Zoro asks Law to teleport him there; Law complains why he has to babysit them but complies. Kaidou unleashes bolo breath, but Zoro cuts it and prepares to use “Hiryuu Kaen” (the move he defeated Ryuma with at thriller bark) using Shusui. Big Mom warns Kaidou to get out of the way and senses that it was not an ordinary sword.

The attack missed and sliced off one of Onigashima’s horns. Kaidou is surprised and senses Oden’s presence in Zoro’s sword. Big Mom attacker with Tenma Daijisai Tenjin, a new attack covering the sky and unleashes a thunder homies rain. The homies can attack in all directions and are alive like Zeus.

Luffy, Zoro, Law, and Kid get struck by the attack, but Luffy appeared unharmed, which shocks Big Mom. Big Mom asks why it doesn’t work on Luffy, and he tells her that it is because he is made up of rubber.

Kaidou catches Luffy off guard with another Bolo Breath, but Luffy withstands it. Kaidou wonders why fire doesn’t work on Luffy, but Luffy tells him it’s because he is thought enough. Luffy then attacks Kaidou with a new attack, “Kong Gattling.”

The manga will continue as usual, and NO-BREAK NEXT WEEK.

We have managed to get hold of these spoilers courtesy of the One Piece Subreddit.

One Piece Chapter 1003 and Discussions 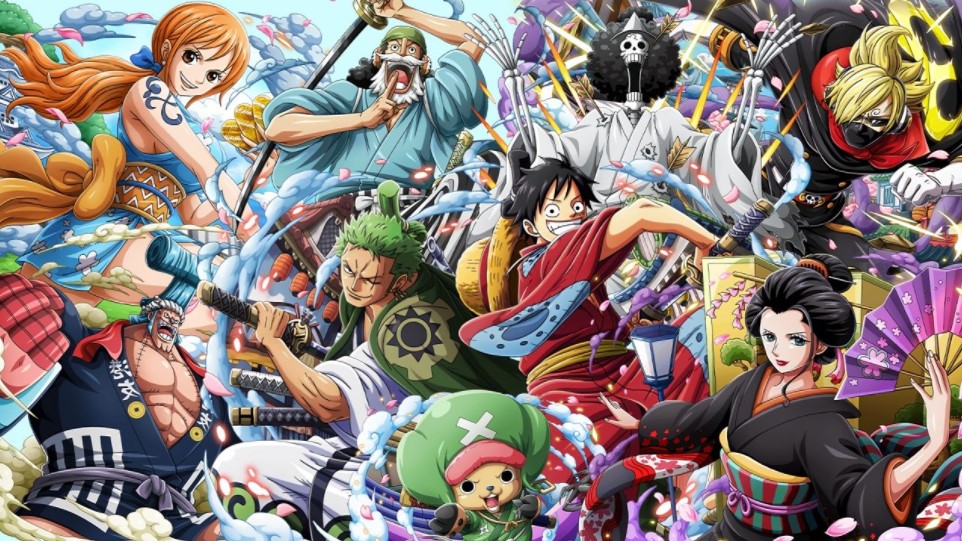 Taking a look at the recent developments, it looks like the manga will stay for a while at the rooftop events. Usually, we would expect that the big fight at the top will receive attention last while the manga shows what is happening at other battles. But apparently, that will come later on. The manga has focused on the fight for the chapters in a row now.

So it looks like the fight at the rooftop will start, and then we will see how other fights are going on when things are about to get heated up. It will only make sense that Kaidou and Big Mom will be the last ones to be defeated. This will be similar to the previous arcs where the arc protagonists’ leader falls last, just like we saw with Doflamingo in Dressrossa.

From the spoilers, it looks like the whole of the next chapter will be fighting as well. So it will be interesting to see all the techniques that the new generation of Pirates have come up with. This is likely to be one of their worst fights ever, so we expect it to be tough for them even if they have mastered and learned new techniques.

This will be a fight to the death, as Kaidou has pointed out that the winner takes all. Big Mom has asked Kaidou to keep Robin alive. So this intends that Kaidou will not leave anyone of them alive in the end. The only way out of this is for the new generations to win the fight, so there is no other way.

Kaidou Intends to Kill All Straw Hats and their Alliance

The manga will likely leave this fight soon, and then we will see how other fights are going on. So we will get some peeks into the fight on how it will be going across several chapters to come. And then, when everyone else has been dealt with, we will get the full focus on the fight that will determine it all.

Now we are getting a lot of attention from the fight, which is a good thing because we want to see it as much as possible. And Kaidou has finally unleashed his dragon form, so he intends to take things seriously. Big Mom has already responded by unleashing the full powers of Napoleon and Zeus.

More spoilers will come out within a day or two. The full spoilers will be completely out by Friday. So we will be getting more updates over the next few days. VIZ Media will officially release One Piece Chapter 1002 on Sunday as usual. So for more updates, you can visit again later today as new spoilers updates will be out.