The only thing that matters to the fans is whether Gonker has been returned to its original masters. We will give viewers all the details they need to understand Dog Gone’s (2023)’s finale and whether all of it was based on a true story or was all fiction.

Gonker suffers from Addison’s illness, which jeopardizes his life, and he must take medicine once a month. Then we, Fielding and his dad, argue over Fielding’s recent decisions and lack of goal for a few days before patching things up during the hunt.

Fielding is shown to be a first-year college student and opens Dog Gone by regretting a recent relationship. Ultimately, he decides to adopt a puppy from the shelter and name him Gonker to make himself feel better. While completing college, Gonker meets Fielding as a freshman. Fielding decides and finally returns to living with his parents as the other friends are looking for employment. Despite their initial skepticism, Ginny and Marshall, shown to be Gonker’s parents, quickly develop feelings for him.

Gonker’s loved ones are notified when he becomes ill that he has Addison’s disease and requires a monthly injection. He appears to have recovered from his former ailment when he pursues a fox one day, and it does not return.

Fielding spends hours looking for him. The Marshall clan launches a full search the next day, with Ginny distributing information from her house and John & Fielding hiking the Appalachian Trail. They had about 18 days to track down Gonker before he received his subsequent dose.

After his crucial health procedure, Fielding finds it impossible to sleep, even though he must. He claims that the one way he can relax is with his dog by his side. Then John, his father, infiltrates the medical facility with Gonker. Fielding cradles his Dog as the animal gradually nods off.

Fielding & Gonker are presented to us in real-life situations following the movie. John defeats two attackers who had been bothering his kid and his buddy in a cafe. The next day, Ginny calls Fielding’s mom, John’s spouse, and John’s friend to inform them that Gonker has already been located and is now residing in a house.

The poor doggo had Addison’s disease. Therefore, everyone is certain that this was the same puppy. When they get to the shelter, they discover it is a different doggo. The child and his father tearfully walk away as Fielding sobs after realizing he won’t ever get to see his pet anymore.

His dad hugs him before taking them back to the house while his son zzz’s in the vehicle. Fielding rushes to his dad and begs them to look for him when he realizes Gonker is always at home. Then, his parents advised him to carry on with his life.

Fielding reaches out to his sister to let her know how he is doing and that the situation for the household is challenging. He gets a phone call from a man who claims to have seen Gonkers eating out of a trash can after informing his parents about his condition.

Given their prior experiences, the family is dubious, but they soon believe it is Gonkers. They dash over and bump into the person there. Regrettably, they are unable to locate the Dog & are beginning to give up. Finally emerging from the foliage, Gonker advances toward the two.

Fielding surrounds him as he works the soil. Due to his health issues, Fielding passes out as they get closer to their house. He is brought to the hospital, has surgery, and joyfully recovers without further complications. 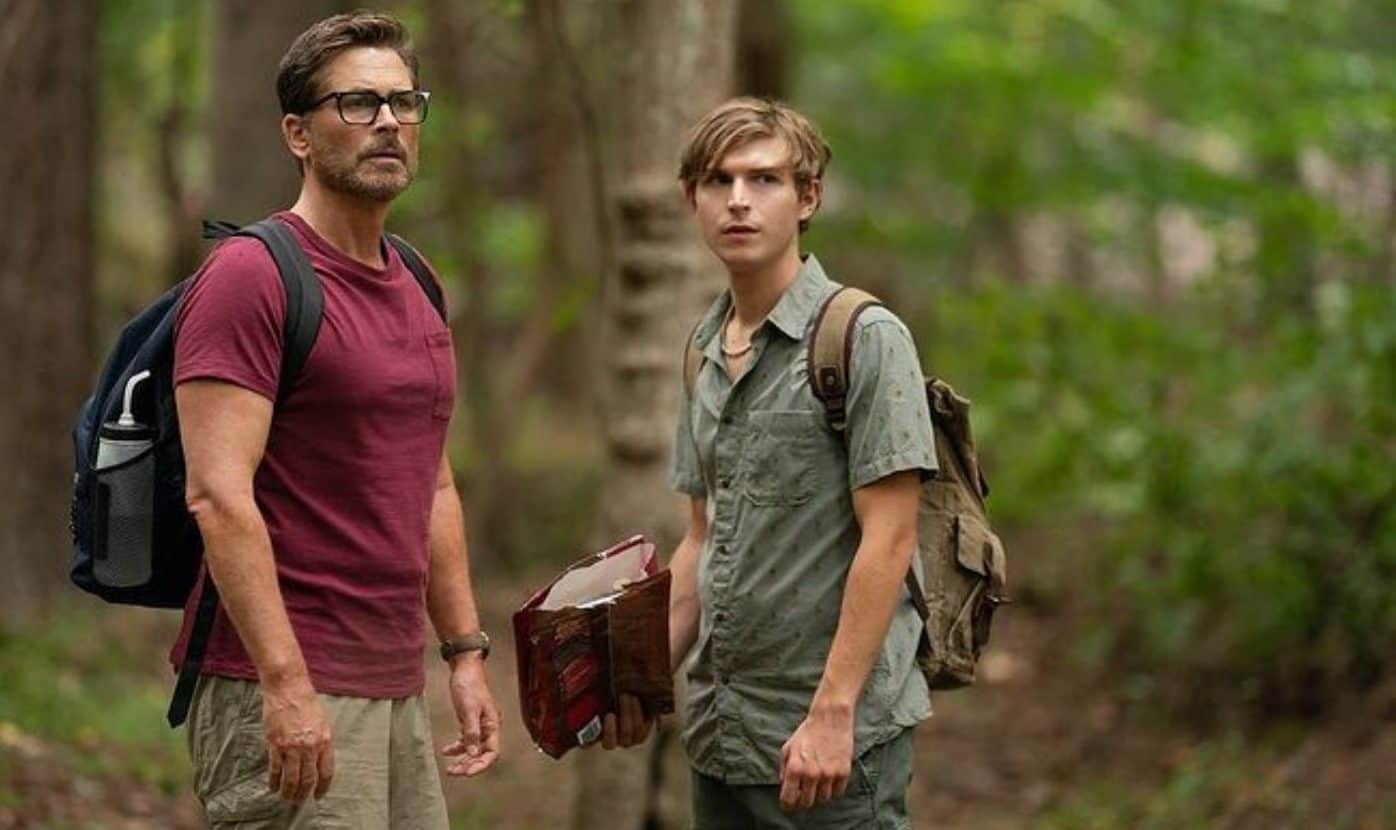 He requires some sleep to refuel, but he cannot locate Gonkers. Afterward, the Dog is sneakily escorted to the hospital by his dad to reconnect Gonkers with his owner. We see an image of the guy and his Dog reuniting at the very conclusion, suggesting that they have made amends and that the tale has a good ending.

Also read: What Happened To Kai The Hitchhiker & Where Is He Now?

The actual story of the missing Dog named Gonker took place in late 1998’s McLean, Virginia, and other neighboring locations, according to a Dog Gone 2023 fact-check. Fielding “Fields” Marshall is the Dog’s real-life master. 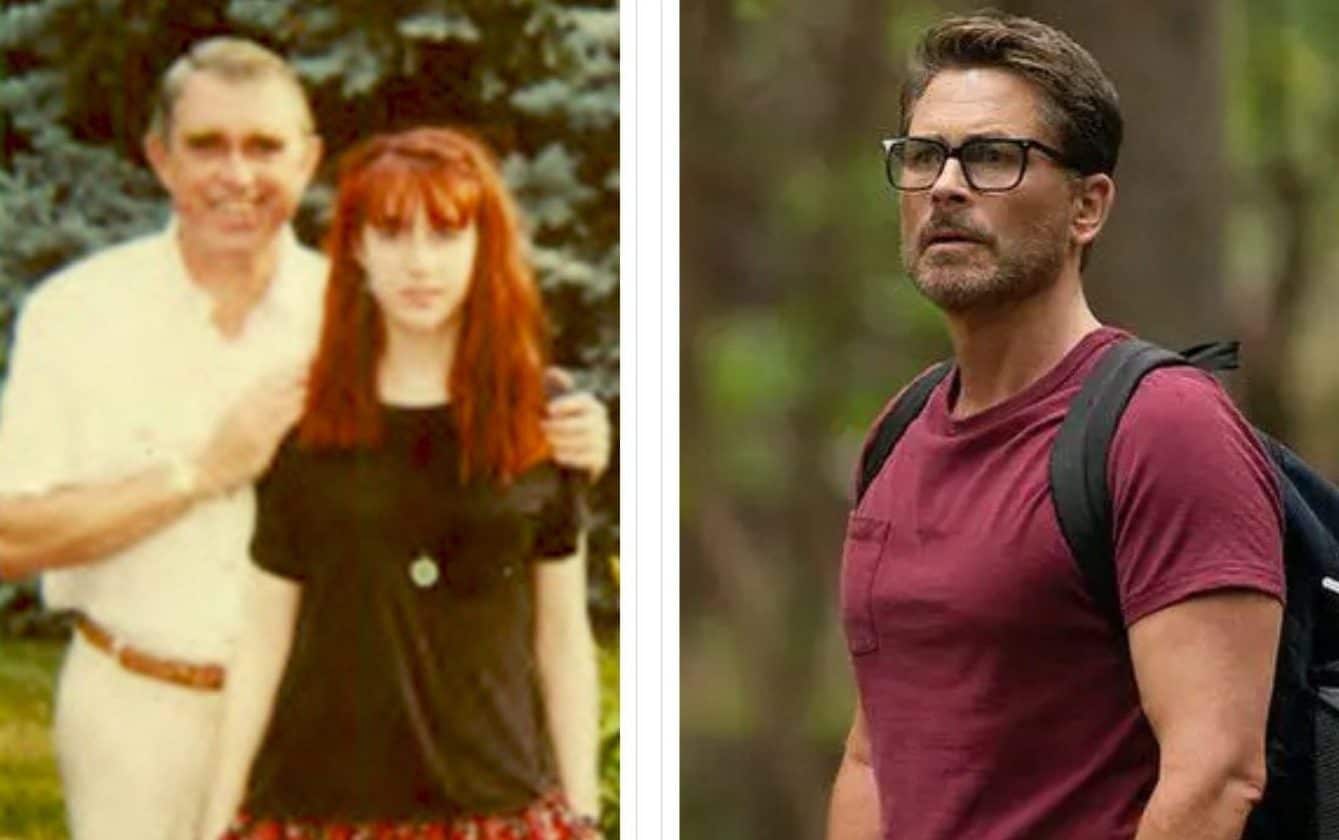 He then resided in a condominium in Vienna, Virginia, close to his family, and worked as a Javascript programmer. When Gonker goes missing, Fielding is shown still residing with his parents in the film, which looks to situate the action in the present.

The 2016 novel Dog Gone: A Missing Pet’s Extraordinary Adventure and the Families Who Brought Him Home inspired the Netflix film. Despite not being autobiographical, the true author of the piece, Pauls Toutonghi, has a close relationship with the actual family.

He got married into it. The young man who owned the dog Gonker, Fielding Marshall, is the brother of Toutonghi’s bride, Peyton Marshall. Rob Lowe plays John Marshal, Toutonghi’s dad-in-law, in the movie. 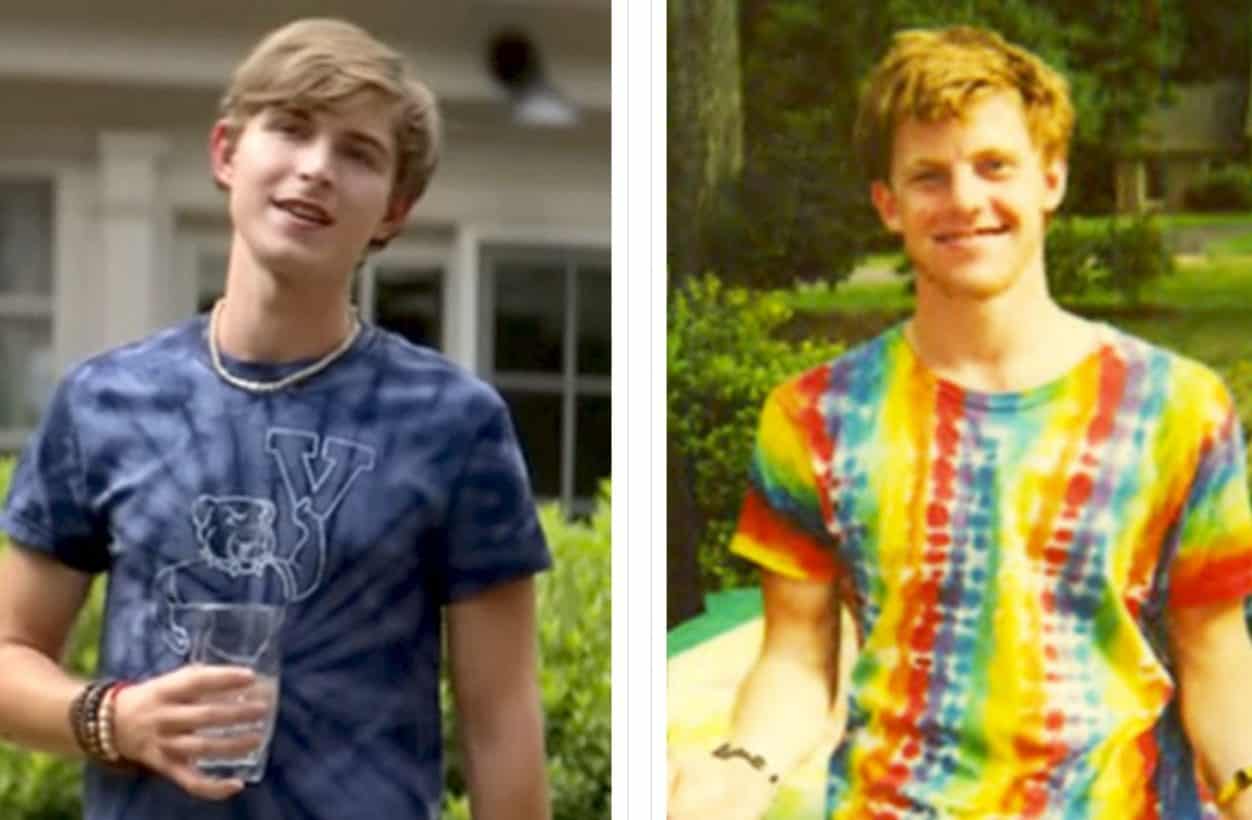 Virginia “Ginny” Marshall, his mom-in-law, served as the inspiration for Kimberly Williams’ role. After hearing the tale from his wife’s family, Paul Toutonghi was inspired to write the novel. According to Toutonghi, this was the legendary family tale of the Marshalls.

“I found myself extremely engrossed when the Marshall clan gave me the whole tale. In person, both John and Ginny are fantastic storytellers. Altogether, the two of them resemble a natural force.,” the author said. According to Toutonghi, he had intended to compose the tale and present it to the family as a Xmas gift. But after spending more time with Ginny and seeing enough for a novel to be published, he changed his opinion.

One of the main differences between the film and the storyline of Dog Gone is that whereas Gonker, the lost Dog, was almost a six-year-old Golden Retriever mix, in reality, the doggo in the film is a Yellow Lab. He enjoyed playing fetch and might spend hours bringing sticks back, as befitted his breed.

He had a propensity for protecting the people in his immediate vicinity. After a home party, he yelled furiously to wake his master, Fielding Marshall. A deadly snake was slithering around, and one of Fielding’s buddies was unconscious on the bathroom floor.

All about Gonker’s real-life owner?

The actual Gonker the doggo belonged to Fielding Marshall, the Marshalls’ son, just like in the movies. To facilitate his emotional recovery after losing his baby girl, he adopted the puppy from the neighborhood SPCA. 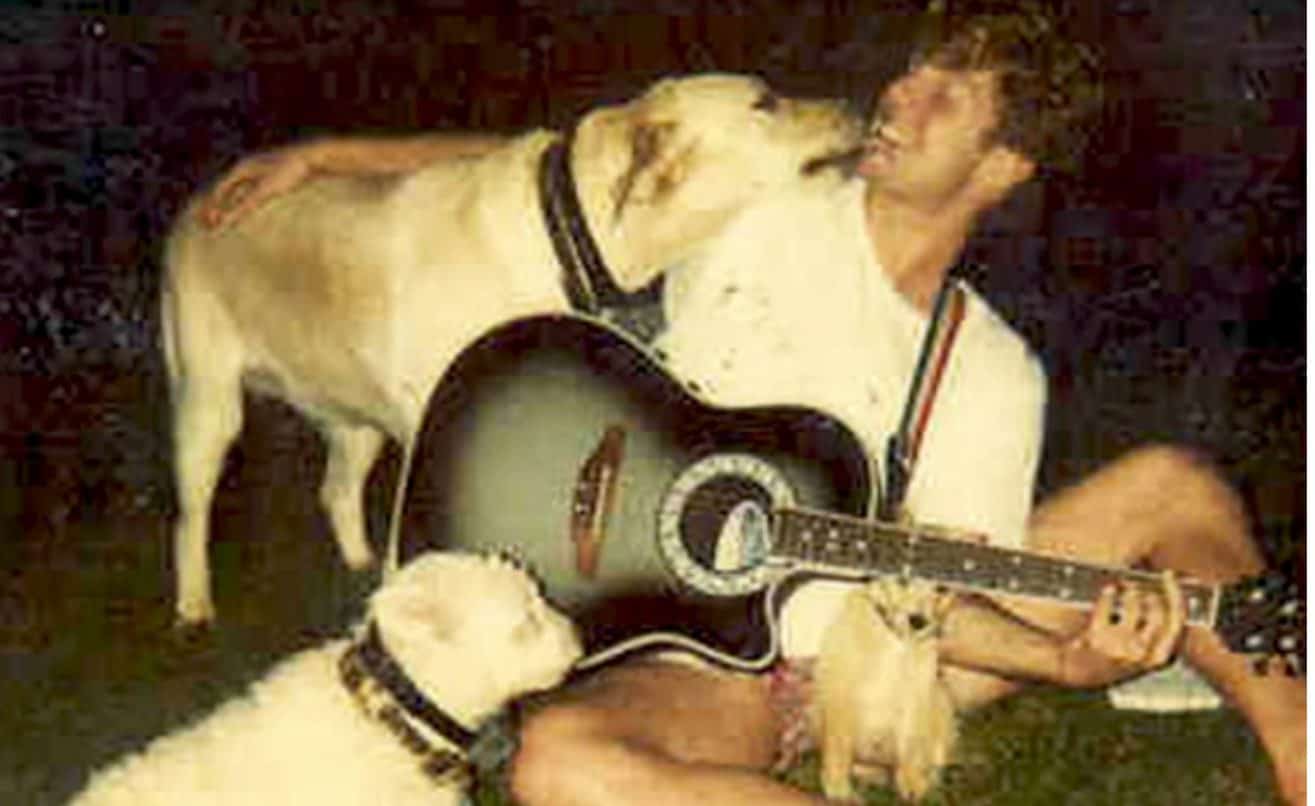 Real-life Gonker with his real owner.

Fielding’s closest mate was Gonker. His justification for getting the Dog is fictionalized in the film. After spotting his former lover in college with another man, he is disappointed.

Did Gonker get lost on Appalachian Trail?

According to some sources in early October of 1998, when Gonker, then six years old, and his master, Fielding Marshall, were hiking on the Appalachian Trail near the Blue Ridge Highway at Catawba; we discovered how realistic Dog Gone is on Netflix.

Fielding started looking urgently for his beloved pet, but the Doggo was nowhere to be found. Will Gonker be able to tolerate the chilly weather? Before he required his subsequent monthly shot to keep him alive, would he be discovered? These were a few of the inquiries Fielding had for himself.

Also read: Avengers vs. Justice League: Who Is The Strongest Superhero Team?

Did real-life Gonker also have a disease?

The lost canine Gonker experienced Addison’s Disease, a condition marked by insufficient corticosteroid hormone levels in the adrenal glands close to the kidney. These “anxiety” hormones, also made by humans, aid dogs in coping with challenging circumstances. 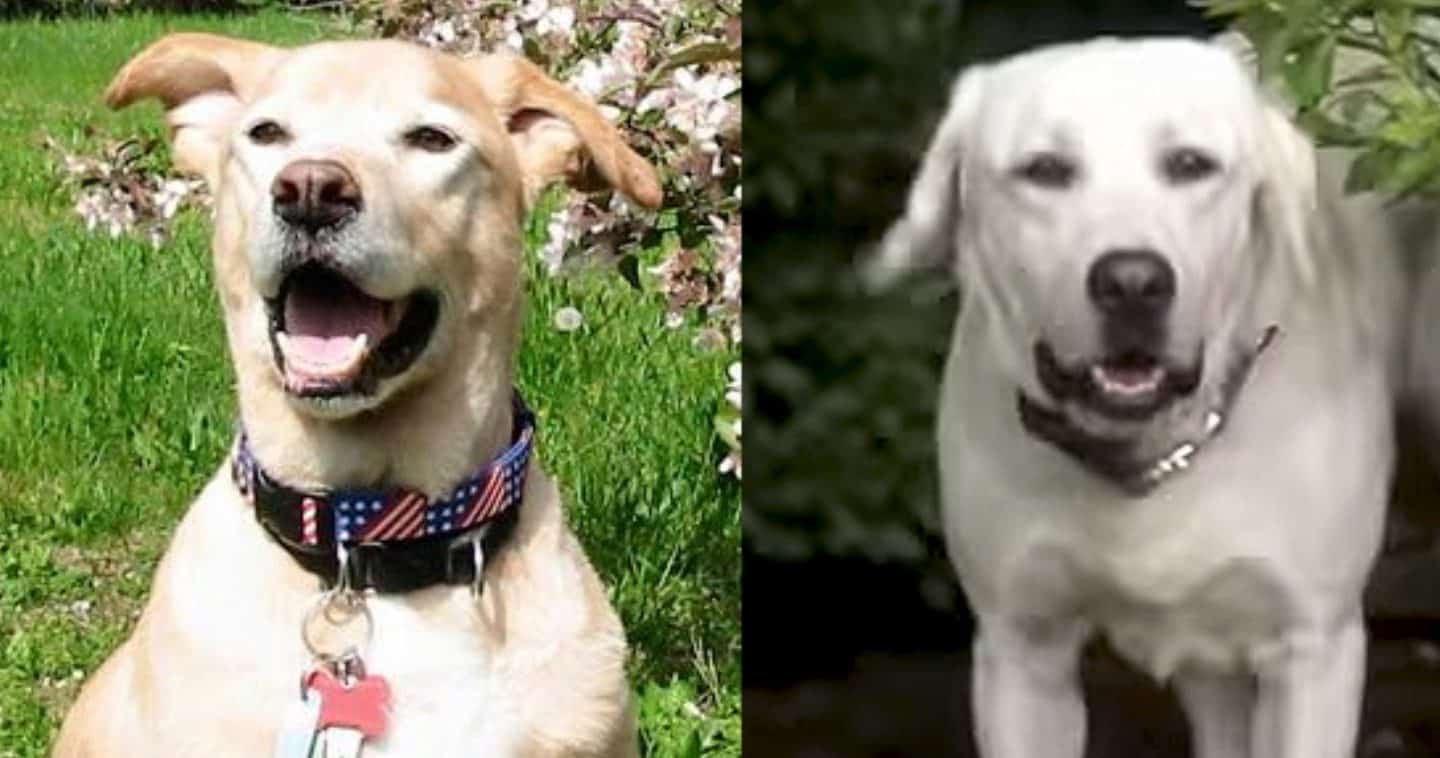 The slightest stressors can induce severe unconsciousness and death if enough isn’t created. When the affected being’s immune system attacks the adrenal glands, Addison’s disease is frequently the result. The course of treatment entails monthly shots of artificial hormones, just like in Gonker’s case.

How did The real-Life Marshall family find Gonker?

Fielding or Fileds M sprayed flyers all over the area. With his dad, John Marshall, he started looking for Gonker-the doggo on the Appalachian Trail. On their quest, they bring Uli, the second Dog in the family, while in the movie, they use a friend’s doggo.

Ginny, who is Fielding’s mom, established a command post at her house. She began by contacting each animal shelter, cultural center, police headquarters, and news organization while using a map to organize the hunt.

She also contacted businesses, places of worship, and forest rangers. Peyton Marshall, his sibling, contributed as well. It didn’t take long until many residents started searching for the missing Dog called Gonker.