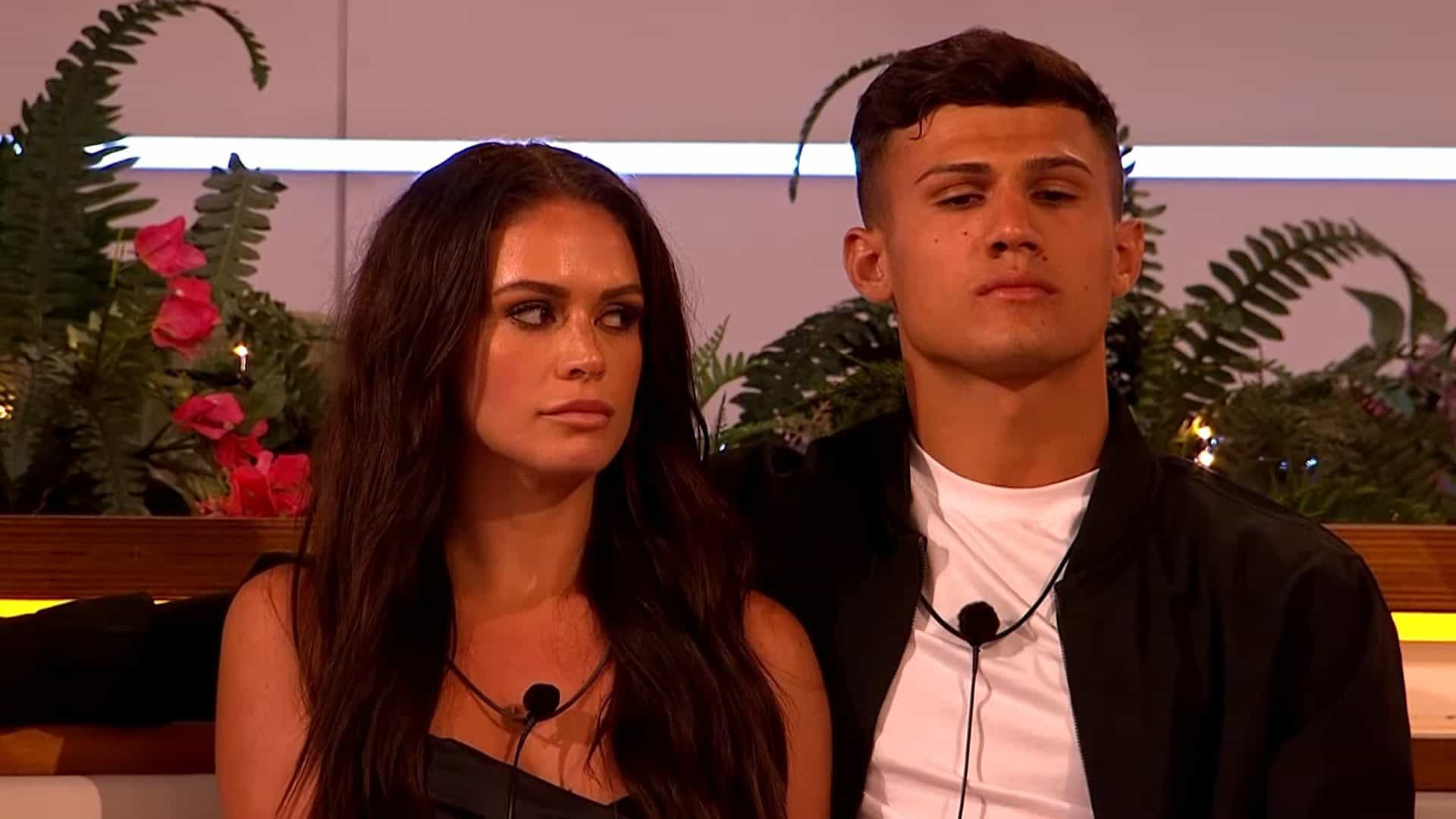 Will is going to get dumped

Who is going to get dumped in Love Island Season 9 Episode 10? In the end, I am going to talk about the Harris controversy. But in episode 9, Will is having a debrief with Jessie after their date, just trying to see where her head is at.

She says that she’s sold on Will, but clearly, when you watch the After Sun, she had her eyes on him even before coming to the Villa. But I don’t know if that was a producer-led idea or if she came to this idea herself. Because it’s genuine or playing a game shot, I don’t know. I just know please be careful with this man’s heart, he’s a good man do not hurt him. But yeah this connection is kind of cringe, but not as cringe as Kai and Tanyel’s kiss.

Kai finally brings Aana-May up to speed on the connection that he has with Tanyel being stronger than the connection he has with her. It is so funny seeing them have this conversation because this is almost verbatim the conversation. These two had about Kai and Tanyel’s connection, so I’m just like “Kai, how all of a sudden has the script flipped?

And just yeah, something about Kai is just telling this man is not used to putting effort at all. And for Tanyel, you can easily see she doesn’t need to put in work, she’s just that girl, and people flock to her. So yeah I wonder how this connection is actually going to build beyond just the sexual attention because I feel like that’s about all they have.

Before diving into Love Island Season 9 Episode 10, let’s quickly do a recap of the previous Episode. In Episode 9, Aana-May does have an emotional breakdown basically saying that she’s struggling, she’s having a hard time connecting and it’s really weighing on her. I really do think she’s had a hard time here, I didn’t think she’d have this hard of a time, to be honest with you, I thought she would have a lot more success. 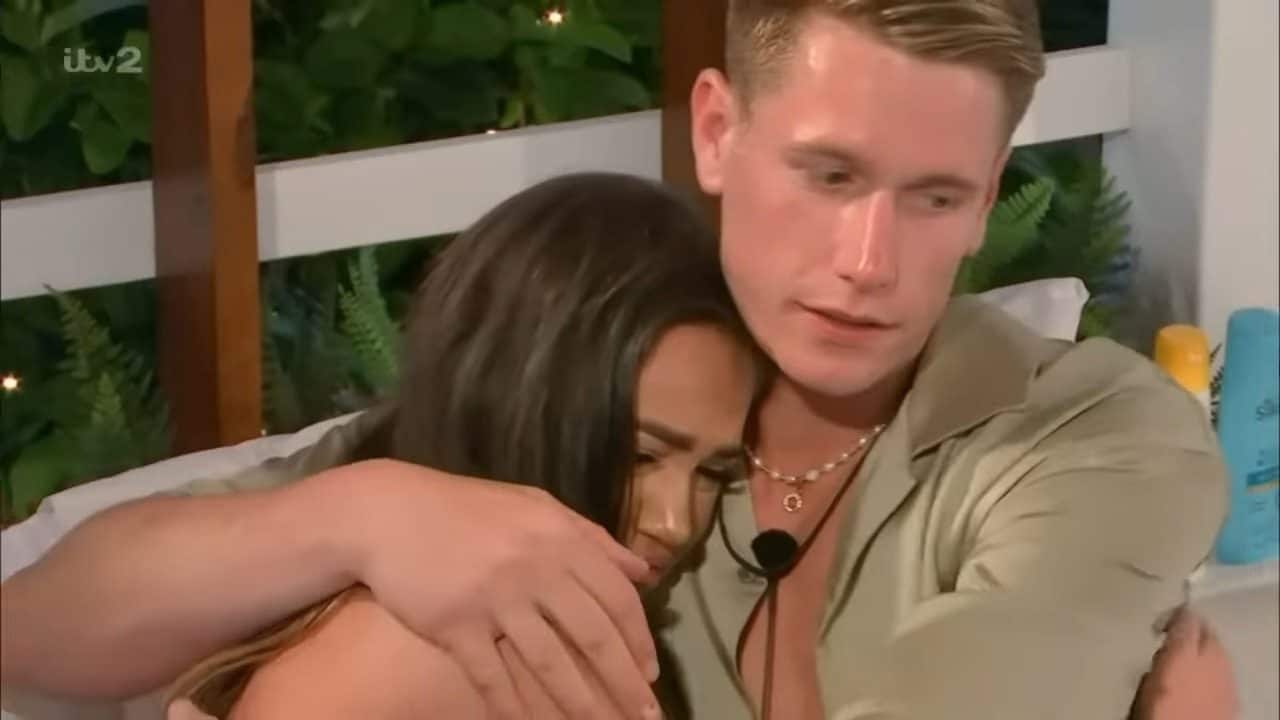 Anna-May is looking for a connection (CC: ITV)

But her personality just hasn’t been on display, we haven’t seen it, and it seems like the people in The Villa haven’t seen it. So, unfortunately, people are not gravitating toward her. Maybe her person just hasn’t come in yet, but I feel like she’s really reserved and so there’s not much to connect to. She does seem to be a sounding board for a lot of people which is great, but romantically she hasn’t been lucky.

We haven’t seen much of Tanya and Shaq, but we do see them in the bed every night getting hot and heavy. Even Tanya was saying the next morning “baby things were really heating up”. And here comes Zara, dishing us a plot twist by saying “what’s Shaq saying”.

Zara… what are you doing. In her defense, when she did come in, she did have a conversation with Shaq that was kind of toying with the idea of pursuing something and he did say that his eyes were just like just looking over glancing a little bit. So it’s not completely out of the blue. But I’m just like Zara you’ve just been in the allegation of stealing somebody’s man, so please don’t put us in the trenches again.

Tanya has obviously peeped the vibe between them and asks Shaq what’s going on. And I like how she admitted that she is jealous, and let’s be real, she really hasn’t like explored that many options. It was one person and then she had a little thing for Kai, it was like a baby situation.

But I like hearing her be like “you know, yeah I was jealous, I was big jealous”. Because it’s like okay, give the guy some kind of confirmation. I still think that there’s just that piece of me that thinks that Shaq could be playing a game but in terms of how he’s handled this whole process so far, he has not made a misstep. So I’m gonna believe for now that he is genuine and I like to see that the feelings are mutual.

There was a challenge and of course, most challenges don’t give as much of anything. However, this one gave us just a little bit of tidbits where Aana-May did pick Tom to seduce and I was like “okay, potential”. And then will finally get his moment with Jessie which obviously had him ecstatic. 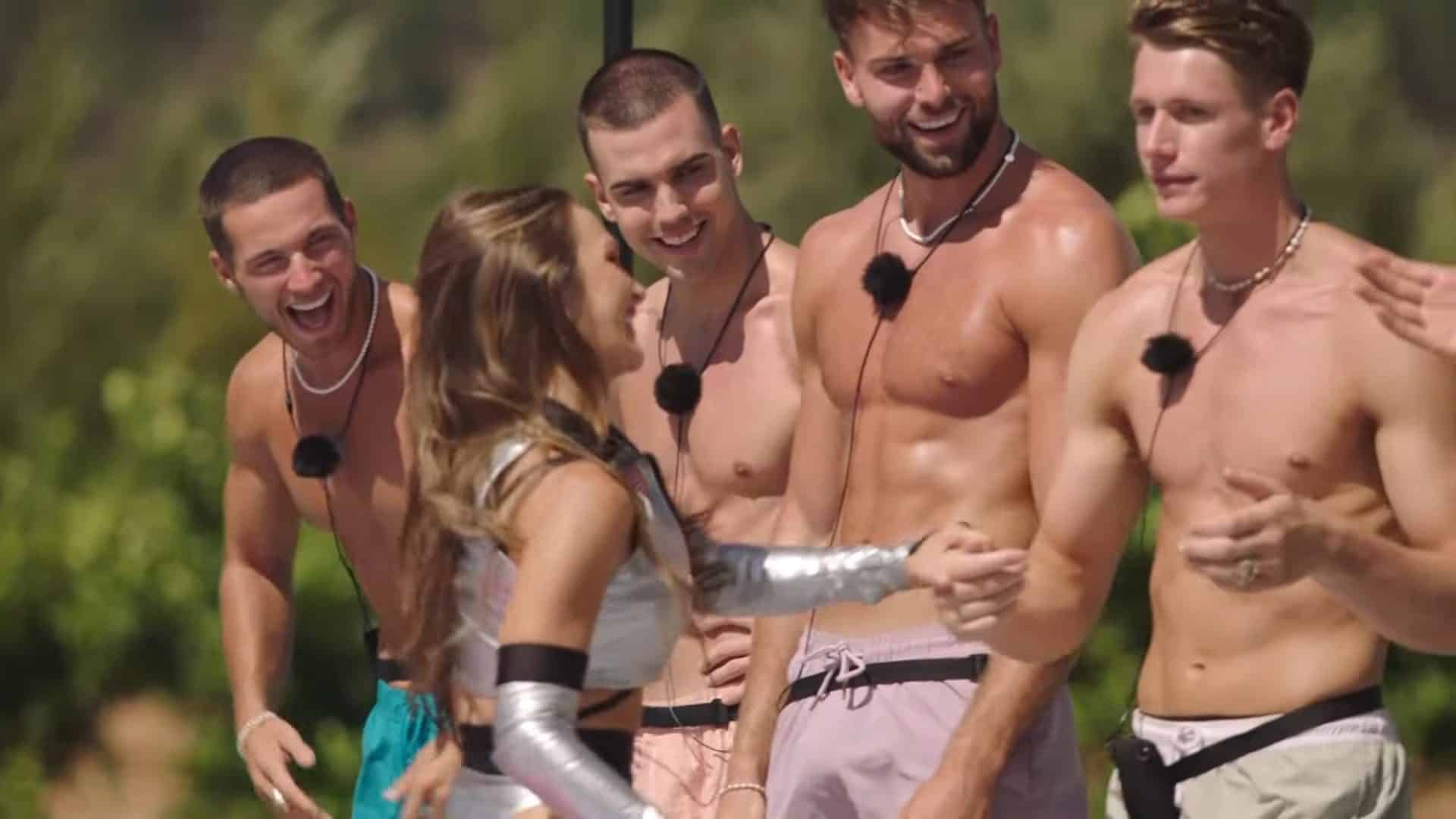 I’m happy for him, but Jessie please, when that new bombshell comes in and you make a beeline from him, please let this boy down easy. When Will came in, I was very annoyed by him but I have quickly become attached and if you hurt him, we will send your ass back to Australia.

Here we were thinking that the Olivia and Zara Saga has been squashed, no. Olivia comes and is like “hey Zara, can we talk sweets, yeah I love you babe… and also I just want your man”. At this point, in the words of Nicole “in the bin”, put both Olivia and Tom in the bin. We can put Zara in the recycling bin because I’m not fully done with her, maybe she could come back. But put those two in the bin. They get to talking and they’re justifying things with some mumbo jumbo.

Olivia must know that there is the Harris controversy because she just told us last night that she’s gonna put all her efforts into Harris. And that took less than 24 hours to change and now she’s back on the Tom train. I’m just like “girl do you know he’s leaving, do you know something that we don’t know”.

But wait hold on now, she didn’t recall who Harris was in the beginning even though they have been in similar circles before. Because he’s a boxer, she’s a ring girl, so maybe she knew this one is going to get in trouble soon. Obviously, that’s speculation, but could you imagine?

Kai and Tanyel end up having a better kiss than the first one. With their situation, honestly, I wonder if it’s going to be like a post-nut clarity situation. And after they finally give in to the sexual tension that has been between them, they look at each other and say “hmm, so that’s it huh”. I just feel like that’s where it’s going down, I could be wrong, and I would love to be wrong, but I just doubt that I am. Speaking of kisses Jessie lays one on Will and boy did she lay it on him. Again, it’s nice and all but Jessie please be careful with my boy. 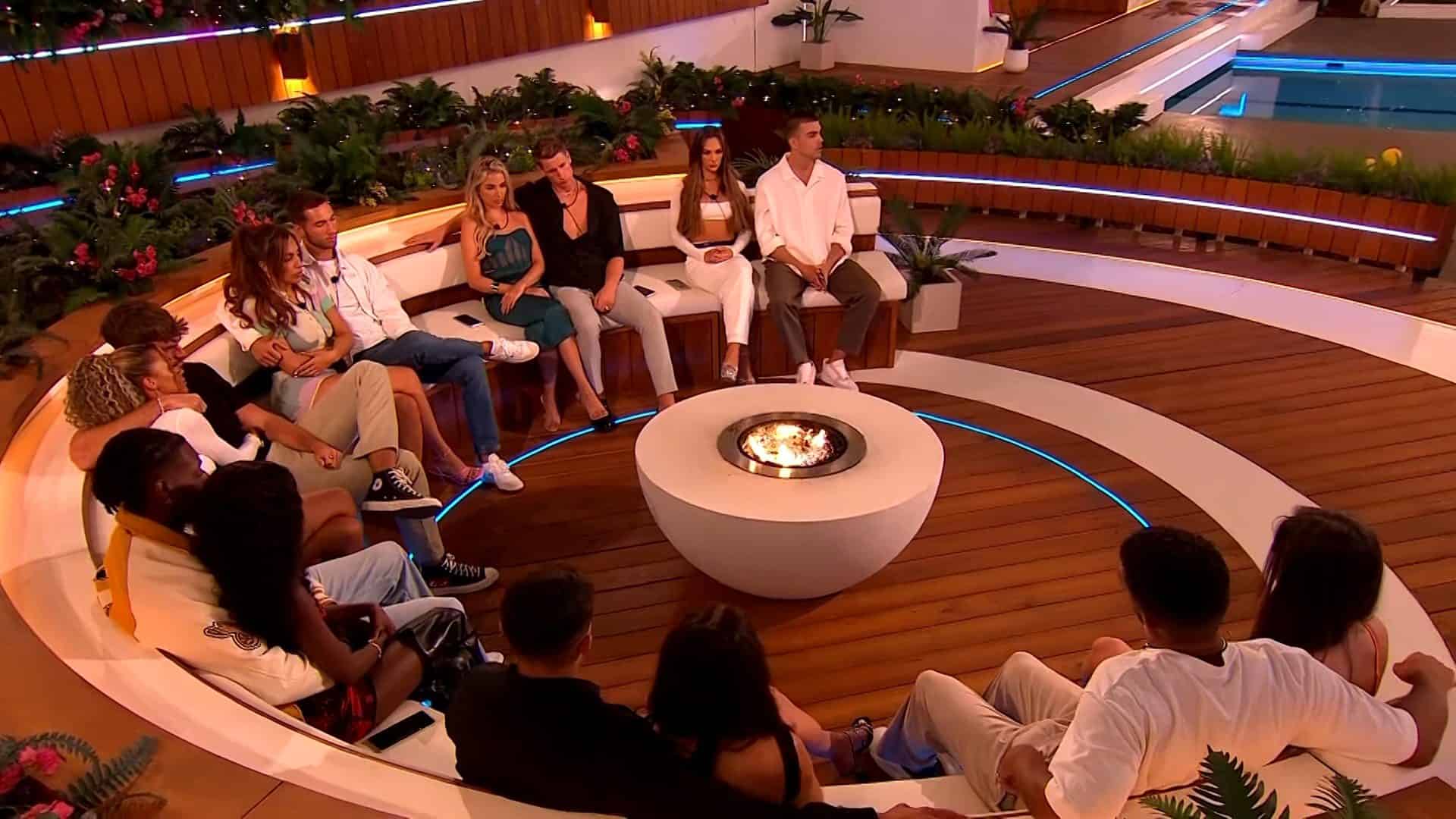 Shaq is always the bearer of bad news and he let the Islanders know that they need to gather around the fire pit because there is a looming dumping. The public has been voting and the bottom three guys and girls are at Jeopardy. And at the bottom, we got Tom, Kai, and Harris for the boys. Aana-May, Tanya, and Tanyel for the girls. And the decision of who gets dumped is actually given to Aaron and Jessie. Now we will discuss when will Episode 9 of Love Island Season 10 will release.

Love Island Season 9 Episode 10 will release on 25 January 2023 on ITV2.  So here’s the speculation that people have, things have been surfacing about Harris. Harris was in an altercation with somebody claiming that he wasn’t a bully and he was saying that on his mama. However, he laid this boy out flat.

So of course, no television show wants this kind of reputation. It doesn’t surprise me though because of the way Harris is so hot-headed. It’s easy for him to get agitated and I’m not surprised that something like this would surface. I’m shocked that it took this long to find it because they do background checks. 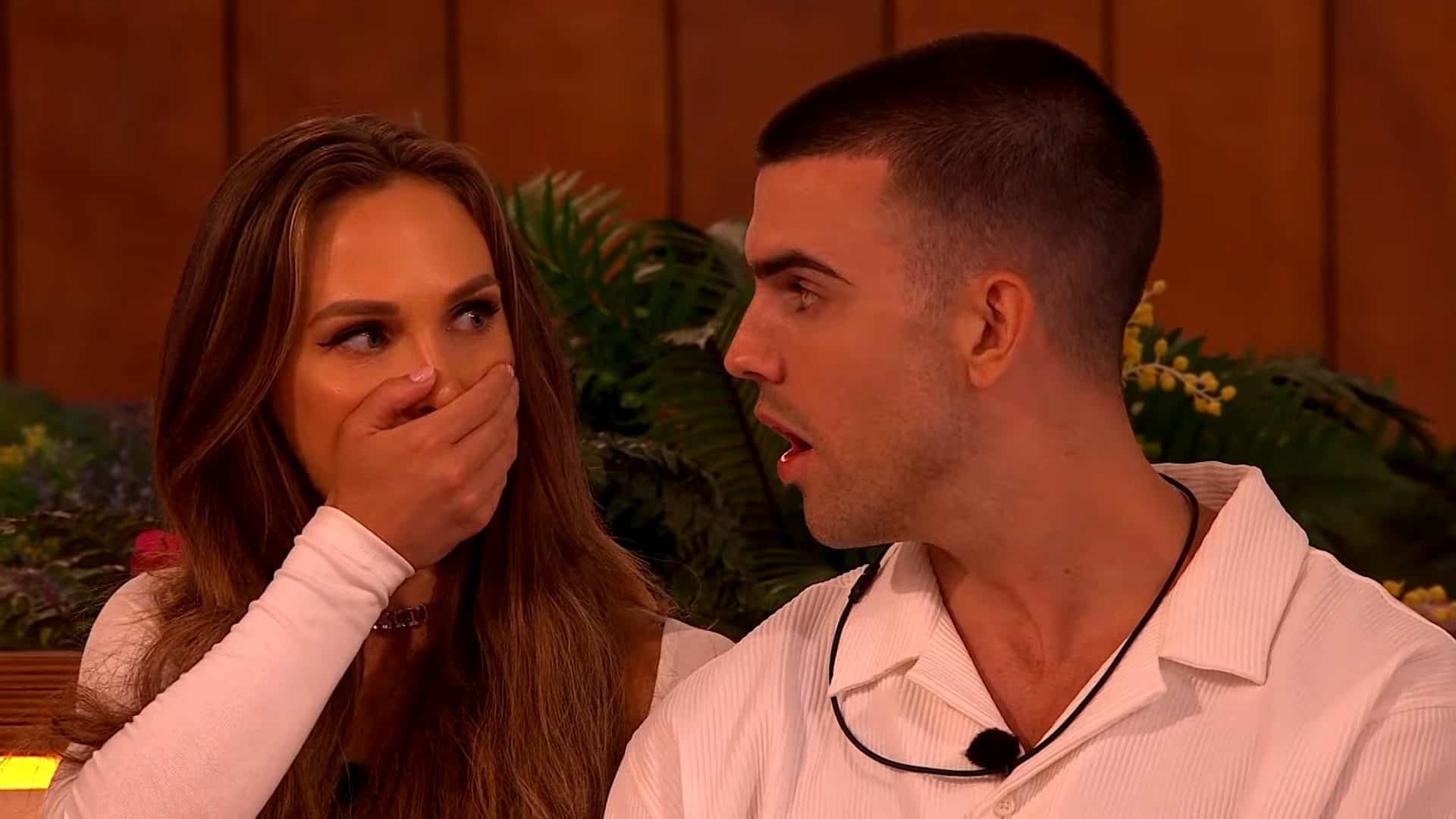 Jessie and Aaron will choose who to dump (CC: ITV)

So I’m pretty sure this is bad PR for love Island and if anything the makers will be in Aaron and Jessie’s ear talking about removing Harris. So we will see who will be dumped, a strong feeling it’s gonna be Harris. If not Harris, I don’t know who. Kai and Tom are the other people at the bottom. Even without the controversy, I think Harris does make the most sense. So we will see who gets dumped in Love Island Season 9 Episode 10.

Episode 10 of Love Island Season 9 will air at 9 pm GMT in the UK. The episode 10 release timings for the rest of the world are as follows:

You can watch Love Island episodes on ITVX in the UK and on Hulu in the US.