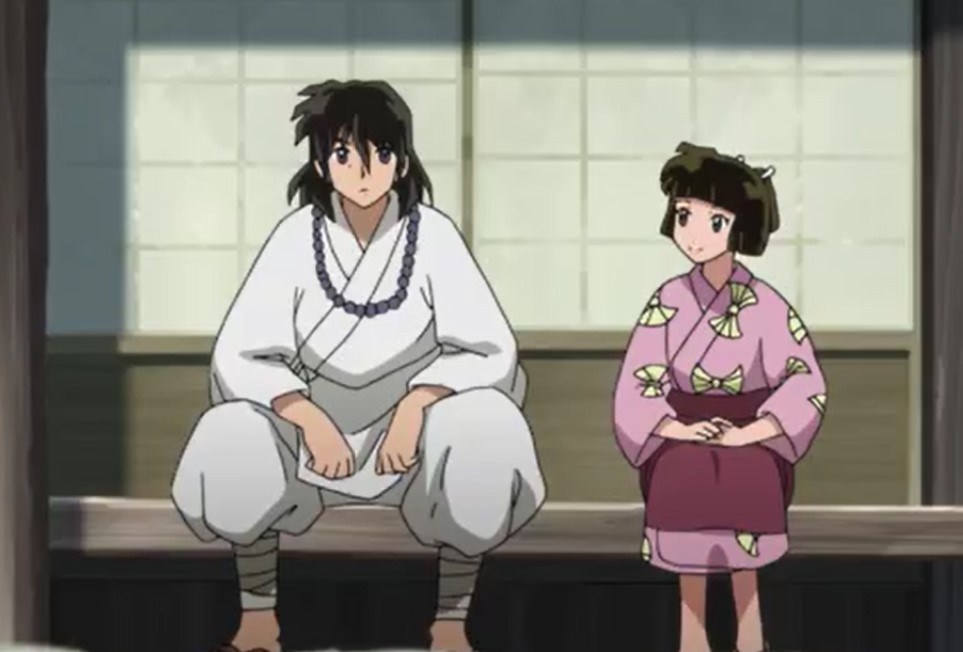 Previously, Nikosens follow the Sesshomaru daughters inside the cave, and they team up and slay him. The next day in the morning, Towa’s hair changes back to a normal white color with only one red hair. Kento saw everything, and he is happy that the half-demons have new moons. Later the new demon rises again, posing a danger to humans’ life; he is one of the four perils- Totetsu.

Totetsu is a human-eating demon; he feeds on humans for his power to increase. In the afternoon, he met with the monk who seems to be powerful. They decide that they are going to slay him, and one of them got eaten. Totestsu said that he thought the monk will taste better than Sanzo that he wants to eat. He then took the Rainbow Pearl asking himself if there are any virtuous monks like Sanzo around here.

Yashahime: Princess Half-Demon Episode 14 will be released on Saturday, 9 January 2020, at 5:30 PM JST. Keep in mind that the new episode of this Anime will be released every Saturday. This post may contain spoilers for episode 12. Watch out for them when you continue. You can watch this Anime officially on Crunchyroll, AnimeLab, Funimation, and Netflix. Let’s take a look at the recap of this Anime and preview below.

Totesu inhales in and blow out a cloud that gives him a ride to his next target. At the village, Kohaku reveals that a demon has been attacking virtuous monks and Shinto priests. Five or six of them have already been eaten. Kohaku reveals that around here, the high-ranking Buddhist Priests in the East temple are the most famous. He said they are heading there to protect them. He then orders Hiosui to take Setsuna and Towa to his brother’s place.

Hisuii doesn’t think their brother will be targeted, and Setsuna asks whose location they will be. Hisuii reveals that it is his father’s place meaning his father is Kohaku’s brother. Towa asks if Hisui’s father is a virtuous monk, and he replies that he is but not a virtuous one. Meanwhile, at a village nearby, Hisui’s older sister Gyoki is with her mother at the memorial tower. She asks her mother if she had any message for her father.

Her mother says no, and she decides to head out while cat demon Kirara is leading the trio to Hisui’s place. On their way, Towa asks why Hisui’s father stays deep in the mountains. Hisuii replies that he is going through one thousand-day training, and Towa said that it is two years and 270 days. Towa started wondering why he is taking too long, and Hisui reveals that his father wants to attain divine power through one thousand day training.

Hisuii doubts that it will go smoothly, and Setsuna asks how many days have already passed. Hisuii replies that it has been over two years, and Towa is impressed, and in the woods, a monk is shown training hard day and night. It has been revealed that it is Gyokuto and Hisui’s father, Mikori. Gyotuko visited Mikori during his training, offering her father food and something to drink. She asks Mikori if today is the mark of the 800th day, and Mikori agrees.

While they are talking about how he has gotten stronger, the demon cat Kirara lands on the ground with the trio. Father and son reunite, and he revels about a demon attacking virtuous monks and Shinto priests. Hisui said that Kohaku had sent them with his demon-slaying friends to protect everyone. Gyokuto is glad that the Sesshomaru daughters are taking care of his brother. Gyokuto and the Sesshomaru daughters get to know each other well.

Mikorii asks Setsuna if she is the demon slayer, and Towa asks if they know each other. Setsuna seems to have forgotten Mikoro, and he is wondering why she can’t remember him. Since Hisui doesn’t like his father’s style, he tells him no one will recognize him while dressed. Mikorii said that Hisui knows that it is his training outfit and it can’t be helped. Mikorii decides to return to his training after his son said he is going to look around.

Towa asks what kind of divine will he attain through the training, and Mikori said that there are only two possibilities in his training. He might attain divine powers or not. Towa said that it would be a useless one thousand-day training and Makori replies there no such thing as useless training. He reveals that he won’t know until those days have passed.

Later Totetsu, the human-eating demon, shows up and clash with the demon slayers. He almost ate them and spat them out, saying that they taste like poison. He got defeated and disappeared, saying that he will never want to eat half-human demons. Mikorii uses his powers to heal Setsuna, who was badly injured, and Hisui is proud of his father. He saw that his father’s training has paid off and played an important role in defeating Totetssu.

Next week this anime is taking a weekly break; it will return on the date mentioned above. As of now, that is how we conclude our post with all of the above updates. For more updates, if you have missed the previous one, try to read it here Yashahime: Princess Half-Demon Episode 13.

A Quiet Place 2 Release Date, When is it Coming Out and What can the fans expect?