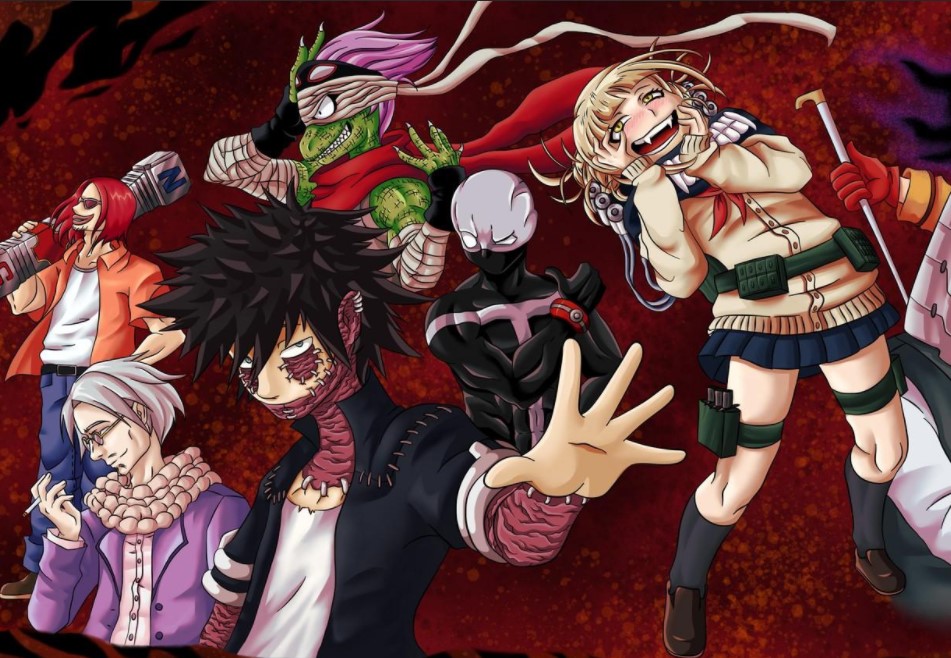 While the Jaku hospital raid was happening, Rikiya Yotsubashi continues to be the president of Detnerat. He explains how he showed to the world, and after relinquishing command of the Metahuman Liberation Army, he took a new leadership. A role on the road to the revolution wearing two faces, and ever since the holy war in Deika City, he was in the role of two people. Meanwhile, at the Jaku Hospital Raid, Re-Destro has accepted a joint development proposal with the Safety Commission.

He knows that the safety commission was watching, and he believed that they could not ignore their product. Re-Destro is inside the building that is destroyed with citizens lying on the floor. The safety commission is surrounding him. He looked at them and talked about their law and order, but he thinks it was necessary. But they seek order without order, and it is true freedom through Liberation.

Chapter 299 will be released on Sunday, 31 January 2021. The new chapters of My Hero Academia is released every Sunday. Note that My Hero Academia is not taking a weekly break this Sunday. The Manga has returned to its weekly schedule. Let us take a look at the recent development of this Manga. You can also find how the battle has ended and how All For One has escaped here: My Hero Academia Chapter 298. 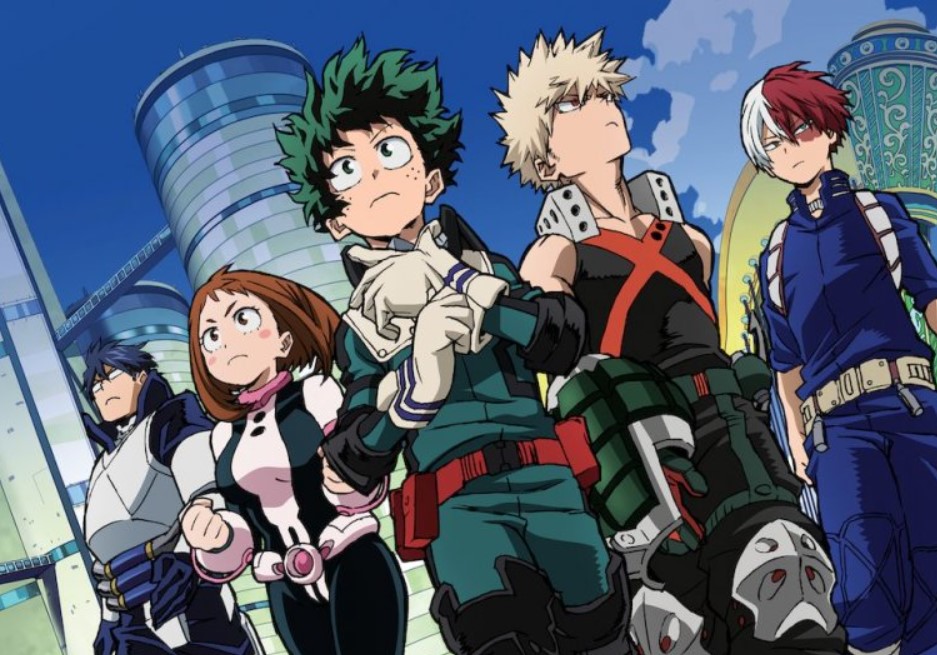 Previously on My Hero Academia Chapter 298

Re-Destro commented that the seeds are already sown now, and they just listened to him while taking care of the injured one. Six hours have passed after the attack on Tartarus Prison. All For One passed by different prisons and take control of an emergency helicopter. He took the pilot as a hostage, telling him to follow his orders. They use the official Biometric I.D to operate the helicopter.

The escaped prisoners from Tartarus and the Nomu destroy the seven prisons, freeing other convicts from six. They destroyed the Shian, Bagu, Kuin prisons, and the six convicts have managed to escape. The authorities were not able to track those six who have escaped. The villains have managed to reach their new hideout, and All For One within Tomura’s boy orders them to watch over him. He told them he needs to rest since they were being chased for a long time.

Spinner looks at All For One asking who he is since he is not the guy he chooses to follow. All For One replies that he must not be afraid he has good plans for Tomura’s body. He also reveals that Tomura’s body needs time to regenerate fully. Once that happened, their desire wishes will come to fruition. After two days have passed, Katsuki Bakugo wakes up in the hospital. He finds himself surrounded by Minoru Mineta, Hanta Sero, Rikido Sato, and Toru Hagakure; they are glad that he is awake.

Katsuki asked them what has happened, and they try to comfort him, but he wants to know the truth. They tease him that they heard that he took one nasty beating. One of them rushes to tell the nurse that Katsuki is awake. They told him everything that has happened. He asked about Deku, Todoroki, Shota Aizawa, Nejire Hado, and Endeavor, but Minoru Mineta comments he is glad that Katsuki is alive even if he is a punk.

While Gran Torino is inside the other room on top of the bed with a lifespan of 61 percent, Shota is also awake but with minor injuries, and his left leg is cut off. The doctor comments that things would have been worse if they were not brought here in time. The doctor said he could thank Rock Lock and the other for making his life a top priority. Hizashi Yamada sits by Shota’s side, worried about Kayama and asking why things have to be like this.

Shota told Yamada to calm down, and he is just worried about the kids, and he asks how the kids are doing. At the same time, Momo, Mezo, Eijiro, and Mina visit Todoraki. He looks by the window and saw a crowd of citizens making their way inside the hospital to see his father. They told Toidoraki not to let what is happening to bother him. Mina shed tears, and Momo consoles her.

Mina comments that she will be fine, but she saw everything and knew about the situation. Endeavor is still conscious while the chaos inside the hospital is asking about his state. They said that Endeavor is aware of the terrible state that Japan is in now. Everyone wants to know how he is connected with Dabi, and they need to know before the press conference took place. 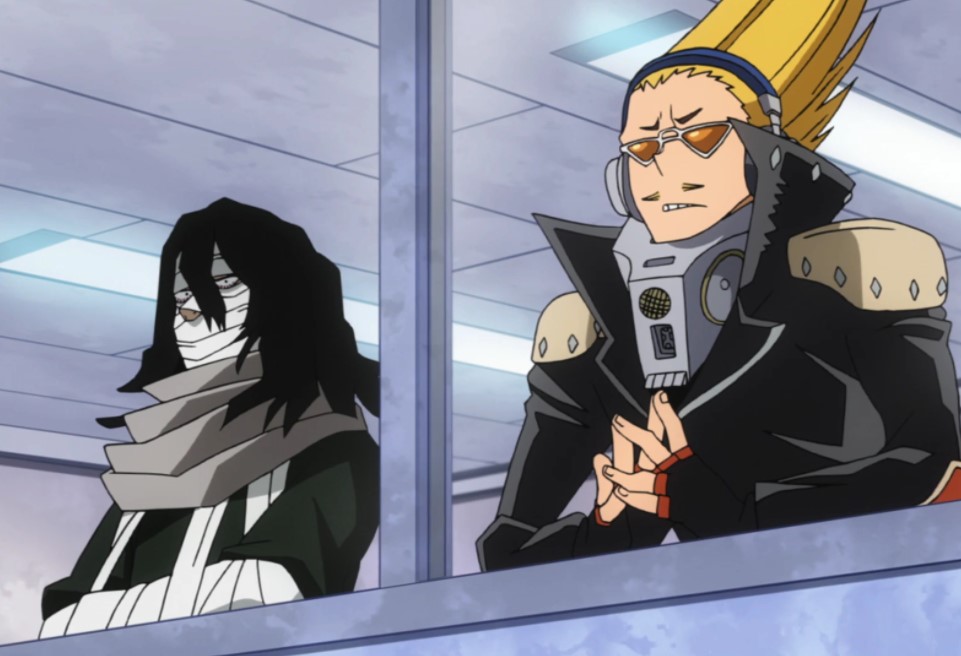 Todoraki recalls when Starservant was arrested, and he is the root cause of everything that is happening now. Since he is the one who accuses that Endeavor will bring destruction to everyone. Todoraki also recalls when Dabi defeated him, and his flames were stronger than his father. He was not strong enough to take down Dabi with his power because of the hatred within him. He finds that Dabi has been watching him and his father all along.

Dabi tried to destroy everyone, along with his family and anyone who stands in his way. He realizes that Dabi was his exact body. But he chooses to take fire at the U.A sports festival, and Endeavor can’t defeat Dabi. While he is still thinking, Fuyumi and Natsuo also visit him. Todoraki’s friends talked with the two and explained what has happened. They reveal that Todoraki’s throat got burned, and he can not speak.

Suddenly Todoraki is shocked when another person enters the room. At the same time, Katsuki gets out of his bed and heads out to find Deku. Mina, Ejire, and Momo try to stop him. Todoraki comments that if Deku dies, he will kill him because other is awake, but Deku is not. Deku’s body is covered with bandages and All Might in the other room, but they are still unconscious.

If you are interested in reading this Manga officially, they can use VIZ Media and Shueisha’s Manga plus official platforms. Raw scans for new chapters are released 2-3 days before their respective chapters are published. We advise you to read the digital copies from their official websites and apps to support the Manga creators and publishers.