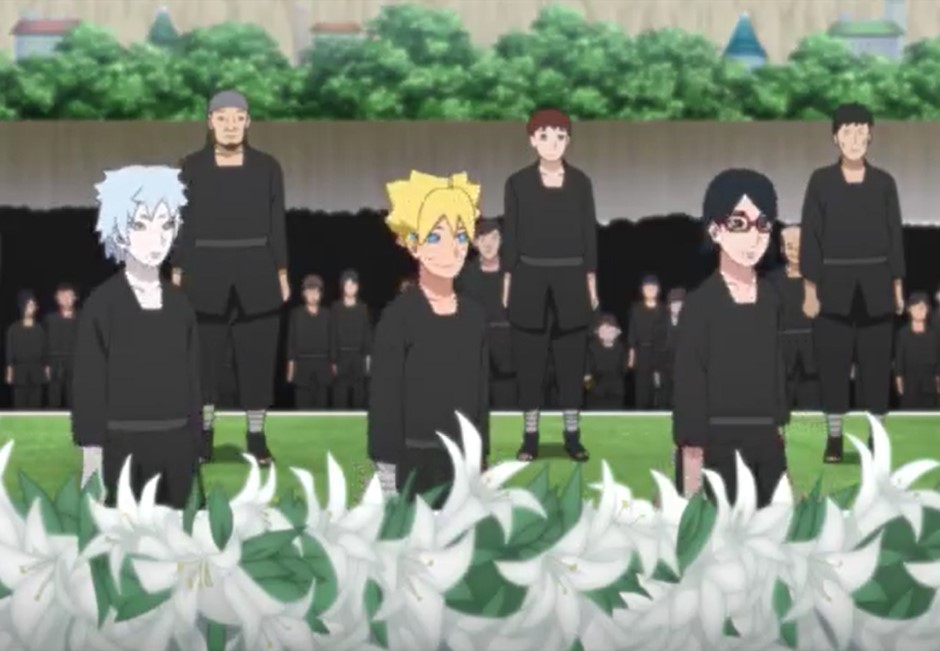 Shikadai wakes up in the morning and he finds his parents still at home, he asked his father why is he still here. Shikamaru and Tamari remind their son Shikadai that it is the day of remembrance for those who died in the line of duty during the Fourth Great Ninja War. The Shinobi and other people gathered on the day of remembrance as Tsunade addresses them. She tells everyone that the next generation has no experience in war and it is their duty to teach them.

Mogino rushes to the guy and stops him. Meanwhile, at the remembrance, Tsunade said that at the Fourth Great Ninja war their enemy was an army led by Madara Uchiha. The shinobi of the Five Great Nation from the Hidden Leaf, Sand, Mist, Stone, and Cloud as well as samurai from the Land of Iron. They joined together to form an alliance to fight them and before they were divided but shinobi everywhere joined together to achieve victory.

The Great Ninja War has cost many lives of people who died sacrificing their lives to protect the nation. Tsunade offers her sincerest condolences to those who passed away in the Great War. The old generation and the next generation pay respect to the grave of those who died during the war. They offer new flowers to the graves while Ino and Shikamaru talk about the good old days.

He also talks about the day when they got the final transmission from Shikamaru’s father and Mr. Inochi at HQ. Shikamaru’s father was an advisor to the previous Lord Raikage who was supreme commander at the time. That day Mr. Inoichi was carrying out his duties as the captain of the Intelligence Corps at the Allied Shinobi Forces headquarters. When they learned that the Ten-Tails had released a Tailed Beast Bomb toward HQ.

Shikamaru’s father used the little time he had left to entrust them with a strategy to defeat the Ten-Tails. The plan worked but it results in the death of Shikamaru’s father and Mr. Inoichi and the remembrance day ended with smiles. Meanwhile, Mogino walks with the unknown guy talking about his arm that needs maintenance. Mogino asks the guy if he is the acquaintance of Dr. Katasuke and he replies yes. He then reveals that Dr. Katasuke saved his life when he was injured during the Great War.

He reveals that during the Great War he was at HQ when it was destroyed. He was the only one who ended up surviving and he should have come here sooner. He narrated the same story as Shikamaru about when the Tailed Beast Bomb hit HQ. The medical team finds him under piles of rocks with lots of injuries. He was taken to Leaf Hospital and lay in a coma for many years and when he wakes up he learned that everyone he had fought with had died.

He saw how his body got modified and think that he should have died with his comrades. In his desperate state, Dr. Katasuke appeared before him and change his life. He learned to use his robotic arm and leg then regains normal life. Mogino asks him if he is still shinobi and he said no he has retired due to his condition. Later the guy is glad that he met with Ino and Shikamaru. He told them the last words of their fathers before they passed away.