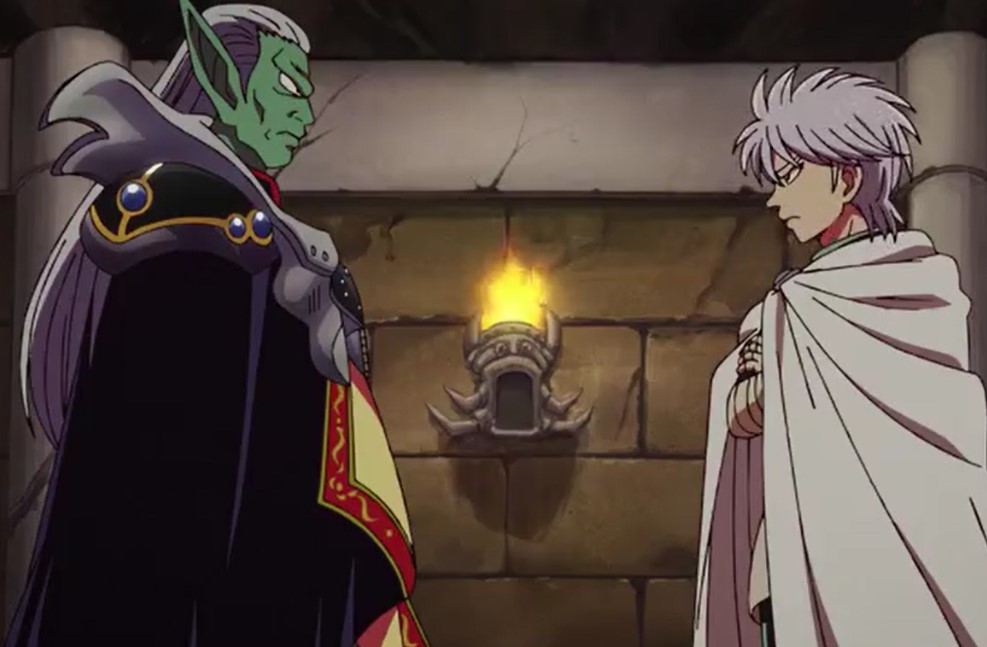 Dai and others didn’t stand a chance against Hyunckel’s powers, and Crocodine shows up and protects Dai. The Hawk took Dai to safety and told Poop and Maam to escape while he clashes with Hyunckle. Hyuncle manages to put Crocodine to sleep and asks Moruge to tend to Crocodine’s wounds. He then orders for Maam to be taken as a hostage so that Dai will come back to rescue her.

Meanwhile, Dai has been taken to a secret hideout of Crocodine, and an unknown man shows up looking for him. He calls Dai by his name, and he is surprised how the older man knows his name. At the same time, Maam s wakes up with a surprise to what is happening. Moruge, along with two Mommies, is taking her somewhere. Moruge notices that she is trying to free herself and reveals that they are inside the Undead Legion’s underground palace. They are heading for the entrance down of an extinct volcano.

Dragon Quest: The Adventure of Dai Episode 13 will be released on Saturday, 26 December 2020, at 9:30 AM JST. A new episode of Dragon Quest will be released every Saturday. Watch this Anime officially on Crunchyroll. Let’s take a look at the recap and preview below.

Previously on Dragon Quest: The Adventure of Dai Episode 12

One wrong move of Maam will result in her burning into ashes. Sometime later, Moruge reports that they have imprisoned the girl in a cell, and the message has arrived from a Heyedra. He reveals that Hadlar, the Dark Commander, will be here shortly. The next day in the morning, the unknown man reveals his name that he is Baduck. He is the swordsman for princess Leona, and they ask him where Leona is.

He replies that he got separated from everyone when the Undead Legion destroyed the temple. But three of the most powerful Sages in Papnica are with Leona. Baduck said that he is sure they are alive somewhere, and Dai said that they got split up with Gomechan. Popp thinks that the older man is going to be disappointed when he gets to know that Hynuckle kicked their butts. Popp asks why Dai didn’t use the power of his mark during the battle.

Dai said he understood Hynuckle’s pain and how he felt. Dai reveals that a monster raised him, and someone who you consider as a father gets killed sometimes, you seek revenge. Dai said if someone kills Grampa Brass, he won’t like it, just like Hynuckle. The two are healing inside Baduck’s hideout cave. Popp said that they have to beat the to save Maam and the princess.

Hadlar and his Dark Army have arrived at the underground palace, and he said that it had been 15 years. Zaboera asks if it was his home castle, and he said yes. When they are moving forward, they find Hynucle waiting for the in the middle of a passage. Hynuckle asks Hadler why he visited him, and Hadlar said he could call it a battle inspection. Hadlar reveals that he knows that the Dark King has ordered Hynuckle to kill Dai, but he has his concerns.

Hynuckle replies that his concerns are unnecessary since he fought Dai and he is not a worthy opponent. Hynuckle promises that when he clashes with Dai again, he will execute him. Hadlar said that he must keep his promise since he is a human and former Avan’s student. He reveals that Flazzard thinks that Hynuckle will fail. Hyuncle replies that they must let the stupid general whine.

He then yells at them that his orders come from Dark King Vearn and Hadlar asks if Crocodine has shown up. Croco dine had left his tank of resurrection fluid before he was fully healed, and Hadlar thought that he has gone after Dai.  Hynucle lies and said that he hadn’t seen Crocodile, but he is the one who beats him and tells Moiruge to heal him in secret. Hyuncles asks Hadlar to stay for a while and look around if he is suspecting him.

Hyunckle left Hadlar with disappointment that if Hadlar were strong enough, his father would have been alive. He thinks that he will show Hadlar how weak he is by defeating everyone associated with Avan and getting his revenge. While he is leaving, Zaboera thinks he is an insolent brat and asks what Dark King Wearn even sees in Hynuckle. Hadlar reveals why Hynucle was chosen of all people.

In the past, Hadlar didn’t like the idea for Hynucle to become one of them, and Vear said that he trained with Avan to kill him. Vearn said no one would question his decision since a human is the best suitable candidate to control the Legion comfortably. Meanwhile, Dai, Popp, and Baduck train day and night to save Maam and the princess. In the middle of their training, Hyunckles show up to take them down.

For this upcoming week, that’s all about what the upcoming episode 13 has revealed for us. New updates of this Anime will be available every Saturday after the release of a new episode.