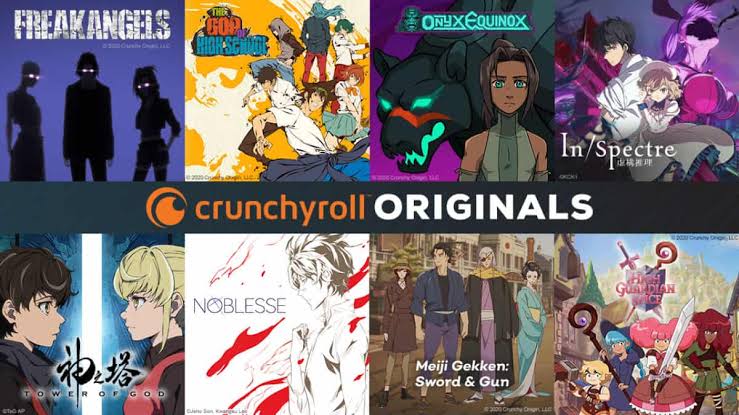 Crunchyroll is the most well-known company that releases and licences anime throughout the world. Recently, it had collaborated with various franchises to produce great anime which were quite a hit among fans, among them was The Rising of Shield Hero which was one of the best anime from the last year. Now, Crunchyroll has announced that it will be producing Crunchyroll Originals content as well.

A total of eight anime shows have been announced for starters under the branding of Crunchyroll Originals. I will be discussing each of them briefly:
1. High Guardian Spice – This anime is about four young girls who have the zest to become the best heroes of all time. They face hardships in achieving their goals.
2. Freak Angels – 12 young psychics come together in order to rebuild the human civilization after it seemingly has come to a sudden end.
3. Meiji Gekken: Sword & Gun – This anime is set in the past, in 1870 Japan to be precise. The show follows four different characters who struggle and face challenges in order to find their place in the changing times of the Meiji era.
4. Noblesse – This one is an interesting show as it follows the story of a vampire who suddenly has to live ahead of his time in the modern world. How he manages to blend himself in the society and survive is amazing to watch.
5. The God of High School – This is a typical high school story where the protagonist and his fellow friends are completing in a competition. But here is a twist, they borrow power from superpowers beings and unravel new mysteries.

6. Onyx Equinox – This story is about a boy who is saved from death by gods and then selected to act as humanity’s champion. He basically has to represent what humanity is at an insanely huge scale.
7. Tower of God – This one follows a young boy who lives under a big tower with his female friend. When she goes missing after entering the tower, this kid follows her and the fantasy story begins.
8. In/Spectre – This anime is the one which is already airing as we speak of it. The two protagonists of the show are willing to solve the darkest incidents that have ever occurred. This show as well is an interesting one.

Which anime among above ones are you most excited to follow do mention that in the comments section below.